Not all fast-mutating organisms flourish. Some go extinct. 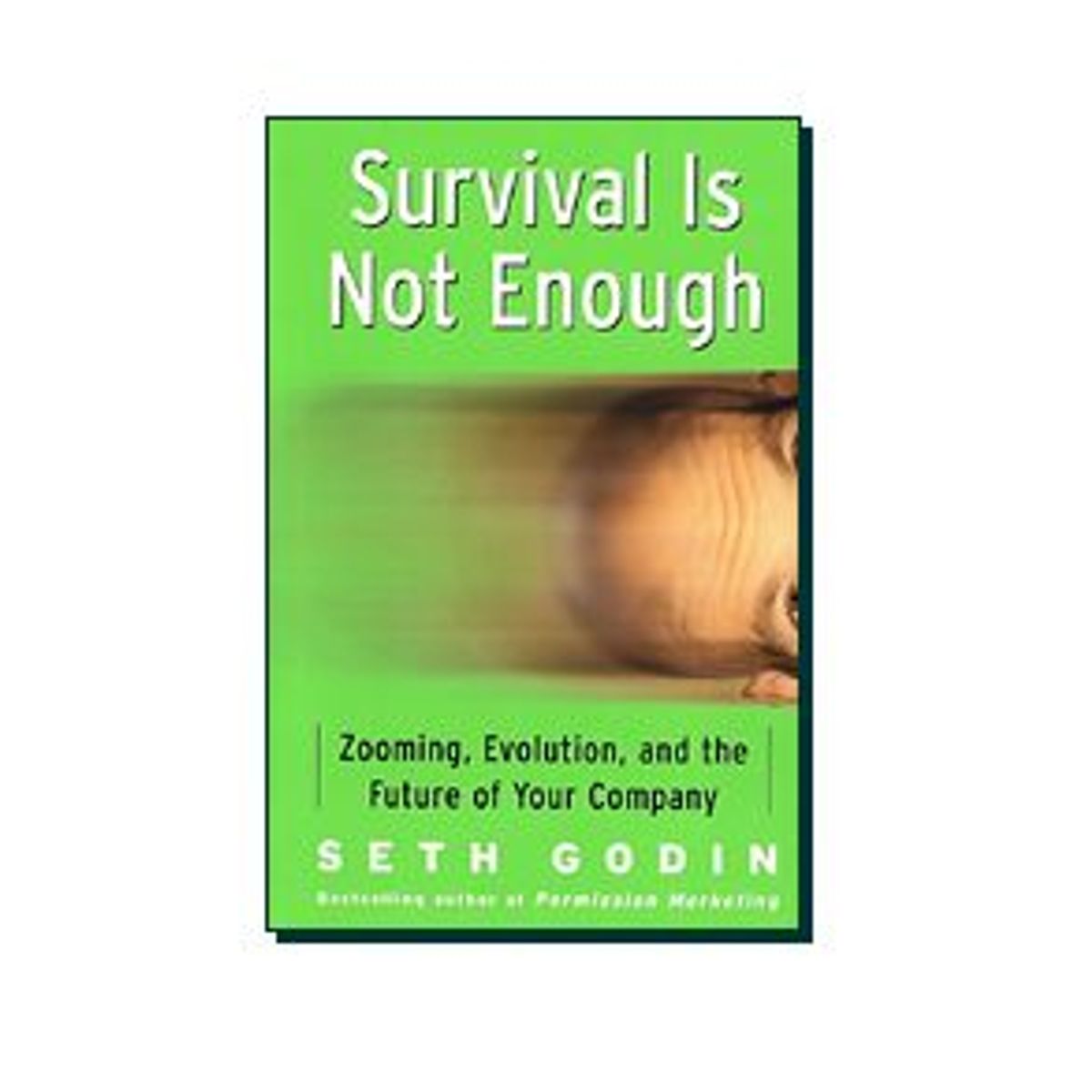 There is a '90s way of doing business that new economy companies "get," and old economy companies create committees to study. It has much to do with flat hierarchies, innovation, casual clothes and foosball tables. It's the theme that ran through every issue of the Industry Standard, every Silicon Valley mission statement and every recent book by "pop" strategy gurus like metaphor-spinner Geoffrey A. Moore or Wired editor Kevin Kelly. And it is exactly this cluster of ideas that is at the heart of "Survival Is Not Enough: Zooming, Evolution, and the Future of Your Company," a new book by Seth Godin, Fast Company editor and self-proclaimed "agent of change."

The twist of Godin's approach is his choice of master narrative: an evolutionary approach to business. On one level, this is just another vapid gimmick connecting a sexy metaphor to the same old recycled management fads: Unleash your company's "mDNA" to make it "zoom"! A clearance-counter library of variations exists on this theme, from "business judo" to "chessmaster strategy." But on another level, Godin's topic gestures at a genuinely interesting idea.

The underlying observation of "Survival" is that Darwinian evolution by natural selection is a theory of change for all complex systems -- not only in organic systems but in any system with finite resources and reproducing individuals. What biology has learned by studying the struggle for survival can inform us as we think about the struggle of products for market share, firms for talent, countries for a tax base or start-ups for venture capital. Natural selection is more than a mere metaphor for the dynamics of business. It is actually at work in economic systems, and there are likely to be common tendencies between ecosystems and markets for strategists to exploit. Darwinism has a long history of application outside biology -- from Herbert Spencer's Social Darwinism to Richard Dawkins' attempt to identify the "genetic" nature of cultural change. The use of evolutionary ideas to understand business is inevitable.

But Godin does nothing to take us past the gimmicky metaphor approach to evolution. The appeal of the evolutionary approach should be that it provides a genuinely scientific framework for understanding market dynamics. Godin's goofball "zoometry" (meant to be the study of business evolution) is no such thing. He ends up offering a bunch of familiar prescriptions: Embrace change, reward performance, take risks, compete ruthlessly. It's nothing any freshly minted MBA wouldn't say. What he misses is much more important: Nature is trickier than that. It's often bureaucratic and resistant to change. It sometimes kills the fittest instead of rewarding them. It usually avoids risky moves and often appears to be pushing noncompetitive, cooperative behavior. Nature is a subtle thing.

If Godin's science is dubious, his timing is worse. This is the wrong moment for yet another how-to guide to doing business on "Internet time." The new economy is firmly in recession. The greatest dot-coms are limping. Major sectors from manufacturing to transportation are reeling. And yet Godin is still telling us to take lessons from Amazon, or learn from the tactics of spammers. In boom time, everybody's a genius. But in a down-market, the usual drivel won't do.

Consider, for example, the case of Enron. Godin doesn't discuss Enron directly in "Survival," but his prescriptions for evolutionary business success read like a list of everything Enron did right through the 1990s: Shed physical assets, build intellectual capital, bring competition to the workplace, encourage innovation, push bold strategies, pioneer new markets and so on. On the new economy scorecard, Enron was a management marvel. In retrospect, the recklessly aggressive strategy and obsessively competitive structure were precisely the things that Enron did wrong. Problems were piling up well in advance of the accounting scandals -- profits were down, growth was sluggish, big bets were coming up losers and observers were starting to get suspicious.

Does Godin's reading of evolution recommend a better way? Quite the opposite. Godin goes on and on about change -- the kind of change Enron specialized in. For Godin, change is constant, pervasive and a force of obsolescence. Most companies, especially big ones, are bad at handling it and have developed mechanisms that specifically resist it. Yet, nature shows that you must embrace change. Survival depends on adaptation to the slightly warmer climate, or the predator's better vision, or the sudden disappearance of a key food item. Species change over generations because natural selection prefers particular variations over others -- the lighter coat or the better camouflage -- and these advantages are passed on by the successful to their numerous offspring. Companies that don't follow this drive risk extinction.

Enron was a paragon of Godin-esque values, particularly in respect to "change." CEO Ken Lay responded aggressively to a changing regulatory environment in gas delivery by merging into and then taking over a larger rival. Lay and his McKinsey consultant, Jeff Skilling, radically redirected the company into commodities trading. They invented a market for energy supplies and came to dominate it. Then they increased the sophistication of the derivatives contracts they traded, created new markets for commodities from bandwidth to weather and brought it all online in a hurry -- relentlessly innovating ahead of the competition. They globalized, undertaking projects from Europe to Brazil to India. And they diversified, moving into water and pollution emissions.

Enron knew how to change because it was set up to encourage innovative thinking. Godin rails against the usual culprits of corporate torpor: committees, skeptics and bureaucracy. Well, Enron had none of that. Initiatives were created through a decentralized approach where anyone could contribute to the marketplace of ideas. An executive from the London office, Louise Kitchen, won big for secretly developing EnronOnline from the bottom up -- contra management's stated strategy -- and launching it into blockbuster success. When one executive originally came to Skilling with the idea for a bandwidth exchange that was facing opposition from his superiors, Skilling told him simply to ignore the opposition and proceed covertly.

Enron kept a dizzying pace, shifting its business from pipelines to gas trading to financial derivatives to fiber-optic bandwidth in just 10 years.

But suspicions about all that evolution began to rise -- especially about Enron's $1.5 billion bet on bandwidth trading -- when Blockbuster pulled out of a key partnership in March 2001. In July, the division's revenues were revealed to be a pitiful $16 million and the entire bandwidth operation was shuttered. Azurix, Enron's water business, had already been stumbling and EnronOnline appeared merely to be cannibalizing its own offline cousin. The Dabhol power project in India, over budget and past schedule, was limping. And California's energy crisis had brought intense scrutiny on the practices of Enron's core trading business. Investors were worried that its fundamental strategy was struggling, and later they found out that it had been.

Godin's change-mongering not only makes for a reckless management style, it also gets the biology wrong. Unlike Enron's transformations, the hallmark of evolutionary change is that it is slow. It takes generations for minor mutations to accumulate into a big change in the species. But Mother Nature seems to prefer it that way. Big changes often yield deadly instability, while refinements permit steady, meticulous improvement on a working design. And by forcing each change to prove itself, selection makes sure to test alternative paths to the big adaptations. Since individuals mutate one at a time, there's also lower risk of losing the whole species. In the grips of an "innovate or die" mantra, Enron regularly placed huge bets on major projects -- India, bandwidth, water. But nature usually waits to see a mutation start to stick in one place before spreading it too far around, not because nature is cautious but because this is what works.

Godin himself applauds Amazon for its incremental approach of constantly running small trials of new ideas on its Web site, and eliminating the ones that don't work. But he misses the crucial difference between a new home page at Amazon, and the type of change embraced by a company like Enron. The former variety moves away from the core business in steps, with small bets on many different approaches, yielding large-scale results after much iteration.

Of course, a competitive organization is the sum of its people. So Godin recommends applying natural selection indoors as well: rewarding performers for their contributions, punishing laggards, encouraging innovation and constantly providing performance feedback. Some mix of these familiar themes is in everything written on the topic, but Godin tweaks the "survival of the fittest" elements. He thinks companies should regularly fire people for performance (make them struggle for survival), and demand more innovation from even the least-skilled workers (even janitors should be "knowledge workers").

Again, Enron fits Godin's bill. Enron worked hard to cultivate the right people and the right culture. It rewarded performance with big cash and stock bonuses, providing luxuries like on-site concierge service and massages. One executive called it "the best meritocracy in business." It stocked the ranks with hundreds of Ivy League and Stanford MBAs in entry-level positions, and then set them to compete against each other. The Performance Review Committee lived to "rank and yank" -- constantly running performance reviews, ranking everyone against their peers and firing the bottom 15 percent. The result was a mercenary culture where traders locked their desks to keep their colleagues from stealing their work and where orders were ignored if they didn't match selfish interests. Even as Enron worked to save itself last September, top traders were heading straight out the door to competitors. Enron's injection of free market absolutism created a Wild West culture of backstabbers.

Even nature is not so cruel. Examples of altruism and cooperative behavior abound. Chimps and wild dogs share their food. Many kinds of animals give predator alarm calls, even when this draws extra attention to the individual making the warning. Even vampire bats share blood with less lucky hunters. The traders at Enron didn't seem inclined to such behavior, nor were there mechanisms to encourage it. Nature's function is far subtler that "dog-eat-dog," an observation that requires digging deeper into biology than Godin manages.

The danger of Godin's sloganeering, simplistic approach to applying Darwinism in business is the complexity of the systems themselves. "Survival" is little more than a compendium of the usual management clichés recast in a Darwinian vocabulary. Converts to this form of Darwinism beware. Well-meaning but naive interventions can lead to disastrous effects as unforeseen impacts ripple through the system. As Enron implemented one extremist approach after another, it grew to be a bizarre, unnatural place. Ultimately, as much-touted new projects failed to deliver and growth began to stagnate, a final lesson of Darwin's became evident: Nature doesn't work by fixing its mistakes; it works by eliminating them.

Amol Sarva is a graduate student inphilosophy at Stanford.