I believed that if I could get through the trifecta of holidays after Sept. 11 without Eddie, I could get to the finish line of my grief. But I'd forgotten about Valentine's Day. 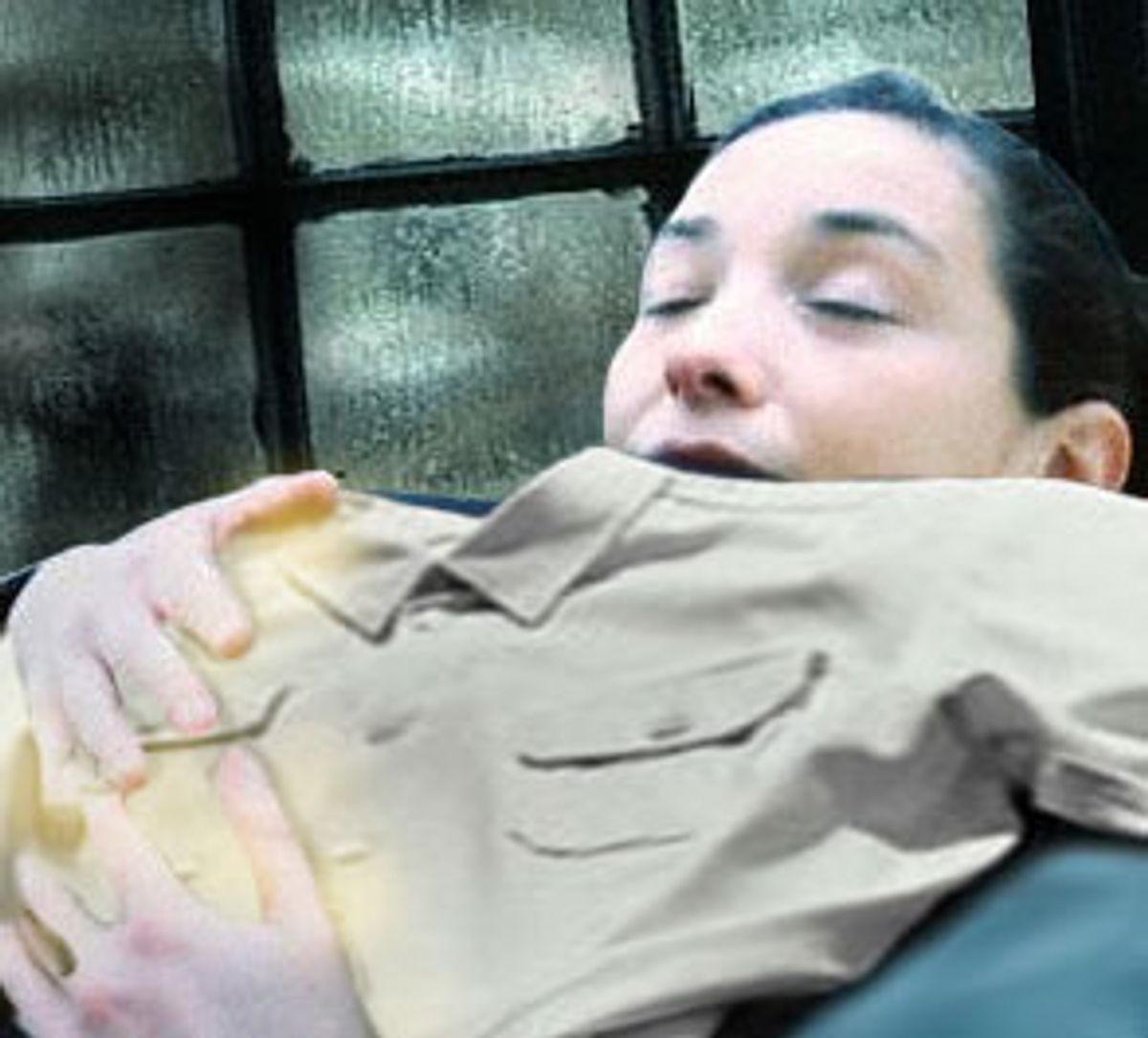 A friend explains my present circumstances with this story:

There was a woman who had two dogs. When one became terminally ill, she decided to have him put to sleep. On the day of the appointment, as per the veterinarian's advice, she brought the other dog along so that it could sniff the dead dog's body and comprehend its death. Deprived of that experience, the surviving dog would have waited at the door for eternity, always expecting her companion to return.

I am the dog still waiting at the door.

Supposedly, with a body to bury, I had an edge in the grieving process over the WTC victims' families who didn't have a body. Supposedly it gave me closure. But having the body is not the same as seeing the body.

So I re-create Eddie from the physical traces he left behind. I pretend that by assembling all these little pieces, I will re-create the whole man. I say goodnight to a picture of his sleeping face, and hug his shirt -- last worn on Sept. 10 -- through the nights. Sometimes I can still catch his smell on it. His shirt from Sept. 9 stays under the pillow. Scents of hot sun and ocean cling to it, the remains of our day at a nude beach. There are still other shirts that I keep in a plastic bag in the closet. I take them out only on special occasions. They smell strongly of Eddie's labor from renovating our house. I won't wash any of these shirts.

I often play the final two messages that Eddie left on our answering machine on Sept. 10, amused that these messages aren't the sweet things I wish them to be. Instead they are the residue of a disagreement we had that was never fully resolved. He says, "Hey, I just want to know how you're doing. Call me." He is annoyed that I am unreachable, which is how I now feel about him, each and every time I hear his words.

Certain items are obvious stand-ins for Eddie, as evidenced by my exaggerated emotions in their presence. Whenever I misplace Eddie's beat-up old hat, I become so anxious that I cannot breathe. Similarly, I was infuriated with my mother when she insisted that we could transport Eddie's bike on top of all the junk in the back of her SUV. The symbolism is easy: the bike, his body; the SUV, the hearse.

At home, Eddie stays in the bedroom, on the mantelpiece. He is captured in several pictures that I casually glance at throughout the day. Alongside the photos, I've added various items commemorative of our life together and our lives apart: old, dried Mothers Day roses, from him, for me, the mother-to-be; two scented candles, one called "Blessing," the other "Love," that I gave to him recently on what would have been his 32nd birthday; a stone brought by his mom and sister from Colombia, his beloved homeland, the only one of several that did not go into his grave; a necklace from Hawaii, the belated birthday gift that he promised me, that I received after he died; and a small black bowl made of special Colombian clay, a wedding present that now has a sticky residue of cognac at its bottom.

When I travel, Eddie stays in a large white envelope full of big color photos of our final day at the beach. In this way he accompanied me to the hospital when I gave birth to our son. Up until then, I had been discreet with these naked pictures of us -- Adam and Eve before the fall. But in the hospital I lovingly presented them to all my doctors.

When it snows and the city streets are quiet under ghostly blanketing, I write love notes to Eddie on car windows and hoods. I am still waiting for a response.

Prior to Sept. 12, I used to try to memorize Eddie's body as I caressed him each morning. I wanted to hold on to my sensations of him so that I could savor him throughout the day. But I never succeeded. He always left my hands warm but empty. And then the day came that my hands stayed empty and all of me went cold. As I try to put Eddie back together again, he is out of my reach, and I am numb.

I naively believed I could function like a racehorse, blindly jumping over hurdles in the trifecta of festivities -- Thanksgiving, Christmas and New Year's -- to get to the finish line of my grief. But when I went to the pharmacy on Christmas Day, I almost cried when I saw the employees replacing Santa with Cupid. In my focus on holidays at hand, I had forgotten about Valentine's Day, the worst holiday of all for the unloved and brokenhearted.

In moments of endearment, Eddie would tell me of his wish to turn 90 beside me. I'd smile and wish for the same. This year, I'll wish for someone new to be a father to my son. He will be someone who does not mind a lingering ghost, or being pushed aside in favor of that spirit. He will know the trauma, but won't be traumatized by it. He will love me but have little or no sympathy for me. Above all, he will be someone who won't disappear on a bright blue day.

Meanwhile, Eddie and I will celebrate Valentine's Day in the same way that we celebrated his 32nd birthday, another milestone of his absence. At midnight I lit the candles on the mantelpiece, danced salsa with the baby, smelled the shirts, listened to his messages and drank some of his cognac. I also poured some cognac for him into the black Colombian bowl.

In the morning the bowl was empty except for some sticky residue at the bottom. I pretend that Eddie drank it, even if it was only the heat of the room that sucked it down.