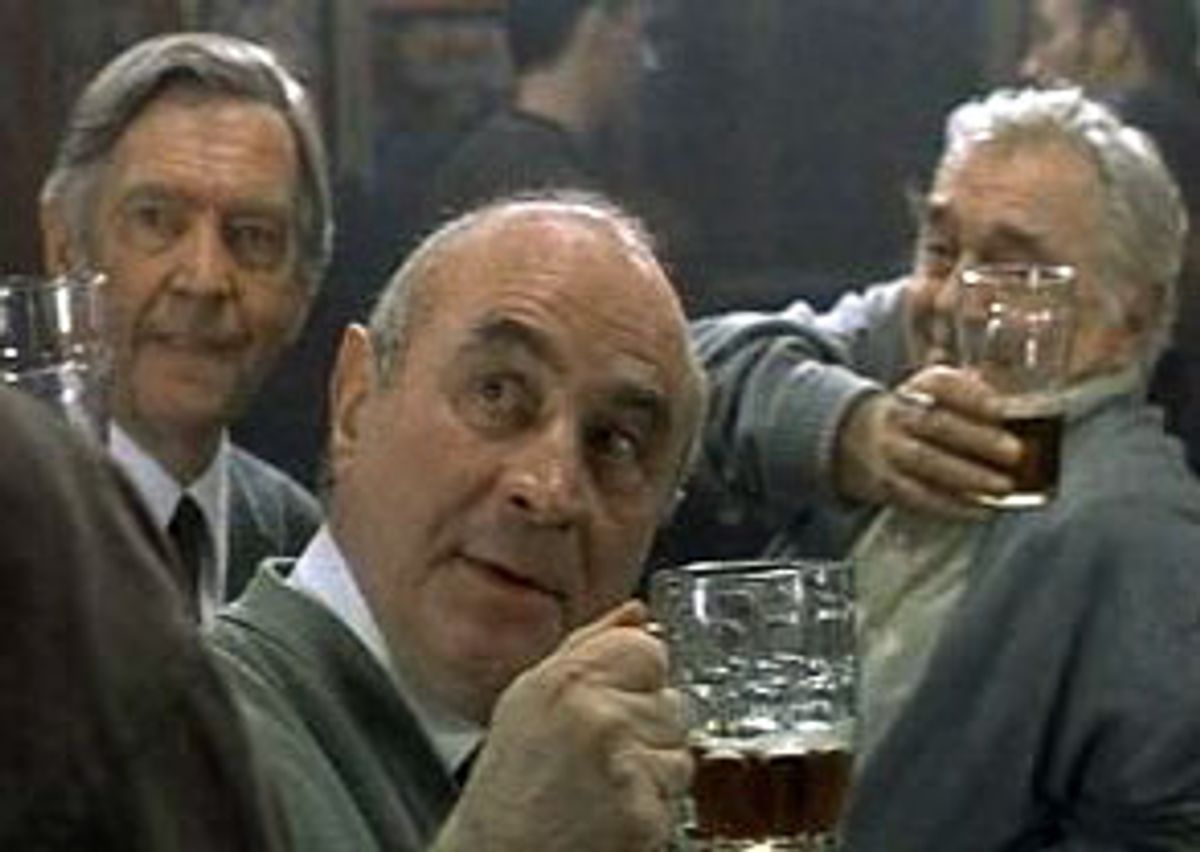 The indignities of aging are a tragedy when it comes to women, as Tennessee Williams knew, and a comedy when it comes to men, as Samuel Beckett knew. Fred Schepisi knows that too. His film of Graham Swift's lovely novel "Last Orders," the story of four men taking the ashes of a friend to their final resting place, is funny in the way that makes you ache with sadness (the way Chekhov is funny), profound without ever being self-important, warm without ever succumbing to sentimentality.

This film about the grand joke of old age, the joke life plays on all of us, is, I think, an unassuming masterpiece. It's one of those miracles of filmmaking where every element -- the direction, Brian Tufano's photography, Kate Williams' brilliant editing -- is in sync with every other element, and work together to serve the material. Schepisi leads his cast -- Michael Caine, Tom Courtenay, David Hemmings, Bob Hoskins, Helen Mirren and Ray Winstone -- to the most harmonious and seamless piece of ensemble acting the movies have seen since Louis Malle's "Vanya on 42nd Street." They make us believe that these people have spent their lives together, that they know each other's jokes, each other's limitations, each other's secrets, and that they respect each other's illusions.

The cast exudes a palpable pleasure in working together, the ease of pros acting with other pros (Ray Winstone, its youngest member, exudes delight in working with the generation of British actors he must have looked up to as a novice). The intuitive rapport between these actors is so certain and strong that, like a great piece of music, it can support solos without breaking the flow of the whole.

There's a way that, for good actors, words are a last resort. Even when you've got great words to speak, you've got to be able to express the full emotion of a moment without them. In "Last Orders," each of the actors is given at least one moment to him- or herself that is a marvel of silent expression: Vince (Ray Winstone) scattering his father's ashes in a spot that holds a special meaning; Vic (Tom Courtenay) stumbling upon a secret about his friends that he is compelled to keep to himself; Amy (Helen Mirren), Jack's widow, sitting on a bus after making a painful decision to get on with her life; Lenny (David Hemmings) overcome with emotion in a pub bathroom for what his life might have been; Ray (Bob Hoskins) watching a horse race whose outcome determines whether he'll be able to keep a final promise to his best friend Jack (Michael Caine); and Jack, watching the same race, afforded only the briefest shadow of relief. None of these actors does more than stand there in these scenes, yet there's a lifetime in each of them.

The movie begins shortly after Jack has died and his friends Ray, Lenny and Vic, and his son Vince, are fulfilling his final wishes by scattering his ashes in the sea at the resort town of Margate. Cutting between their journey -- with side trips to the World War II memorial at Chatham and to Canterbury Cathedral -- and their individual memories of their earlier lives, "Last Orders" shifts smoothly between time and points of view. Schepisi proved himself adept at nonlinear narrative in his film of John Guare's "Six Degrees of Separation." Working from his own adaptation of Swift's novel, Schepisi does work here that's even more assured, and he's aided by Kate Williams' cutting, effortless in its transitions between the years and, when it needs to be, suddenly abrupt, as if to signal memories that are still raw.

It's a deceptively simple method but it has a quietly overwhelming effect. Watching these characters in the present, left with their memories of their dead friend, and then seeing him alive again among them, or watching their not always happy reveries of youth (where they are played by a group of talented young actors well matched to their older counterparts, especially J.J. Field as the young Jack and David Hemmings' son Nolan as the young Lenny) the past and present exist at once, as if nothing in these characters' lives has been settled. The movie can be summed up by the advice the dying Jack gives to Ray. "If you ever get the choice," he says, "if you ever get the option, you go first. It's the carrying on that's hard. Ending -- it ain't nothing."

"Last Orders" is about the ordinary human bravery of carrying on. And it's a testament to the bravery of actors. Almost all the leads have been in movies long enough to carry associations of their younger selves, and Brian Tufano's photography is alive to the beauty of their aged faces. It's a shock to remember the young David Hemmings as the hip photographer of "Blow-Up" or the evil Mordred in "Camelot" and see him here, huge with too many pints. His voice is hoarse and booming (he congratulates Vic, his undertaker pal, by saying, "The funeral went a treat") and his eyebrows stand straight up as if they were ready to fly away from his forehead.

But there's not a trace of vanity in Hemmings. This is how he looks now, his bull-like body seems to say, and if he can accept it, so should we. There's a special grace conferred on an actor who divests himself of vanity in this way. Hemmings may have been more handsome as a young star, but he has never seemed as fully human as he is here. Lenny is the loose cannon of the bunch, still nursing resentments over how his life turned out (or didn't), still mad at Vince for getting his daughter pregnant years ago. Hemmings and Winstone sustain a distrustful tension, with Vince parrying Lenny's constant needling (he keeps calling Vince "big boy"). Yet the familiarity that's built over the years is stronger than their differences. And Lenny's beery irascibility can veer suddenly into warmth, even clowning, as in a charmingly silly bit of pantomime Hemmings executes toward the end of the movie.

The pleasure of Ray Winstone's performance in "Sexy Beast" was seeing an actor who has so often been cast as a brute reveal his tenderness. In "Last Orders," he consistently underplays his role, which suits a movie where the drama of life is lived through, rather than resolved in big, climactic moments. His scenes with Caine depict their father-son rivalry as a never-ending dance of love and irritation. Even Vince's last gesture to Jack -- borrowing a Mercedes from his auto showroom -- is both a tribute to his dead dad and also a way of flaunting the wealth he acquired after refusing to join Jack in the family butcher shop.

As Jack, Michael Caine does one of the hardest things for an actor to do: play a limited man without making him seem foolish. The shadow over his marriage to Amy is that of their severely autistic daughter June, who has been living in a home for 50 years. Amy has dutifully gone every week to visit the daughter who never recognizes her, but to Jack the girl is dead, a tragedy best forgotten. Jack holds his sadness close to the vest in the manner of men who, above all, want to put a good face on things. Even as he lies dying in his hospital bed, he banters with his pretty young nurse, confiding only in Ray about the trouble hanging over him: the shady loan he took out to save the shop, which will dog Amy if he dies without finding a way to repay it.

This role is in many ways the opposite of the confident screen persona Caine epitomizes. But nothing about his acting has ever been predictable. And it's in the fissures of panic crossing Jack's ever-cheerful face that the film suggests the terrors of age. Schepisi captures the way the relationship between Jack and Ray shifts from their younger days, when Jack was clearly in charge, to the point when both realize, without saying anything, that Ray (whom Jack calls Lucky) is the sturdiest one of the group. Perhaps he's not the most content -- that would be Vic, to whom Courtenay brings the gentleness of a born peacemaker -- but he's the sturdiest.

Hoskins bears Ray's responsibility, the trust his friends place in him, in every fiber of his fireplug build. If there's such a thing as seductive comfort, Hoskins has it here, with his shy smile and the little snatches of crooning he does when he's by himself. Hoskins doesn't have the wrenching moments that the other actors do, but he gives a major performance, perhaps because he inhabits Ray so fully. It's a tough thing for an actor to convey just how remarkable a creature a good man is and that's just what Hoskins does. You understand why Ray is a pillar to his buddies, and you understand the affection Amy feels for him.

Ray carries a torch for Amy from the moment he meets Jack in the war and sees her picture. And as played by Kelly Reilly, a stunning redhead with a come-hither smile and a sunny ripeness that's a promise of sex, you understand why. Helen Mirren doesn't really resemble Reilly, but the thing that has always made Mirren so attractive, the way she conveys a wealth of experience (and not just sexual experience) without regret, is the perfect "continuation" of Reilly's performance.

Mirren does what may be her best screen work here, as a woman who is constantly struggling not to let her disappointments, particularly Jack's lack of interest in their daughter, overwhelm her. The film keeps returning to a scene between Amy and Ray sitting near the Thames following Jack's death, where some of what she's kept bottled up for years comes out. It's an unburdening in the truest sense. Determined not to let bitterness overtake the love she feels for her late husband, Mirren allows you to feel Amy doing her best to will her resentments into lightness, like bubbles that will pop as soon as they leave her mouth. And her final leave-taking of her daughter, one goodbye in a film full of them, is pitch-perfect, a beautifully modulated piece of acting.

The world of "Last Orders" is populated by average people who have learned profound things, yet there's no wisdom-of-the-little-people phoniness about it. It's suffused with mournful affection. And it ends with a scene that sums up the movie: the friends braving a rainstorm to disperse Jack's ashes. They're not four Lears daring the elements. They're doing something tougher. Carrying on.