Awarding the Canadians the gold was a half-measure, but as long as figure skating is controlled by a bitchy sewing circle it won't be a real sport. 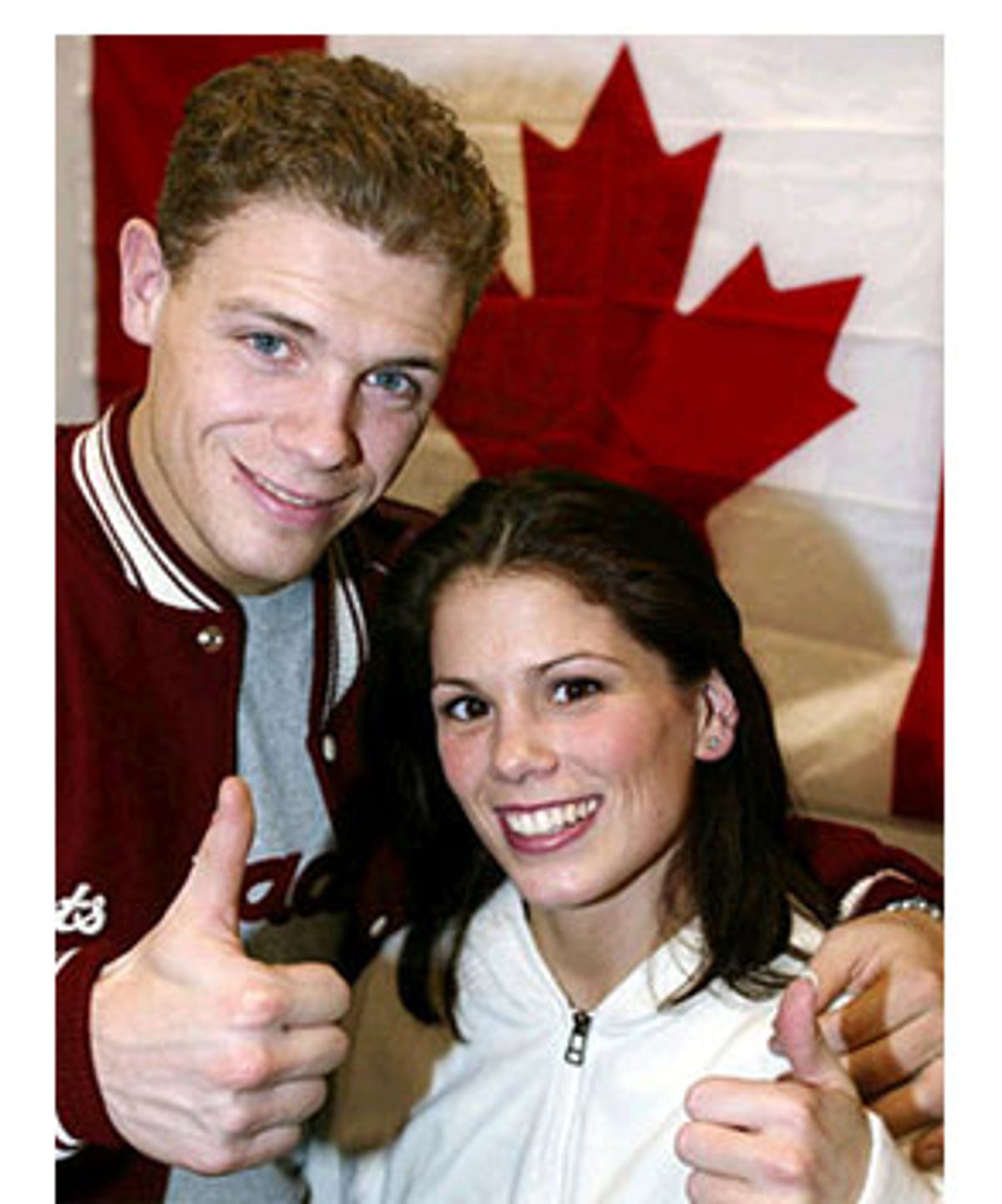 Yelena Berezhnaya and Anton Sikharulidze, the Russian spoilers who initially won the gold medal in the Olympic pairs figure skating competition over Canadians Jamie Sale and David Pelletier, made a charmingly brief, deer-caught-in-headlights appearance Thursday on "Larry King Live." In their extremely fractured English, they seemed a little punch-drunk by all the attention, and more than a little hurt that some people didn't think they deserved to win.

You couldn't help but feel for them, especially Berezhnaya, with her big Keane eyes and very own made-for-TV story line (like, alarmingly, many Russian figure skaters). Her first pairs partner, who was rumored to have been somewhat abusive to the quiet Berezhnaya, skated too closely to her during side-by-side spins, and the blade of his skate sliced into her skull. She required brain surgery, which left her unable to speak or walk, much less skate.

Enter the equally reticent, but resolute Sikharulidze. He hurried to her hospital bedside and after she recovered, they quickly became figure skating partners, romantic partners and then world champions. Could anyone be more deserving of an Olympic gold medal?

Well, actually, yes -- the Canadians, who performed much more skillfully. The problem is, skill is not the only standard by which skaters are judged, as Sikharulidze pointed out, after King asked him to defend their victory despite their noticeable errors, like his wobbly landing on a double axel. "The [score for] Jamie and David was bigger than ours for technical merit," Sikharulidze said. "But we have two marks, technical merit and artistic impression. And we had bigger marks for artistic impression. That's why I don't even understand what's going on, why it's such a big scandal from nothing."

But that's exactly why it became such a big scandal, and why it's always been so easy to dismiss figure skating as the quintessential sissy sport. It's not because men twirl through the air in sequins (frequently to show tunes). It's because there's too much emphasis on ill-defined "artistic" merit instead of measurable criteria for success.

Despite cries from Moscow that this scandal is some dark North American conspiracy (because, after all, we know what demanding hotheads those Canadians are), the public responded sympathetically to Sale and Pelletier not because they were Canadian, but because they seemed to skate better, and still didn't win. It seemed to violate the rule of fair play. And the excuses, leaning on ineffable descriptions of the Russians superior "artistry" and "elegance," do not sound like serious answers at all.

That's why Friday's decision by the International Olympic Committee to deliver a gold medal to Sale and Pelletier was the right one. After the IOC bullied the International Skating Union to investigate a complaint lodged by the referee, an American, in the pairs event, union officials uncovered some evidence that the French judge, Marie-Reine Le Gougne, a wispy looking woman who favors fur stoles and candy-apple hair dye, somehow behaved badly. "We have declared misconduct," declared Ottavio Cinquanta, head of the International Skating Union, which then promptly voided her vote for the Russians. Subtracting Le Gougne's vote left the Russians and Canadians tied 4-4, and voilà, we had two pairs of gold-medal winners!

The conspiracy theories will only persist: What was Le Gougne up to? Was it part of a pact that would deliver a gold to Russia in pairs in exchange for a gold to the French dance team?

Bizarrely, in this sport, that's entirely possible. At the 1998 Olympics in Nagano, Japan, a Canadian judge accused a judge from the Ukraine, Yuri Balkov, of trying to collude on the voting in the ice dancing event. In 1999, at the world championships in Helsinki, a cameraman caught judges from Russia and the Ukraine exchanging what appeared to be foot signals during the pairs final. Remarkably, Balkov is expected to be judging the ice dancing event again in Salt Lake City -- and all eyes should be rightfully focused on those sealskin clogs of his.

Furthermore, the constant talk of artistry and "presentation" in figure skating seems like nothing more than glittery trash talk. Fans of the Russian team have taken swipes at Sale and Pelletier's saccharine music selection (the score to that masterpiece of movie schmaltz "Love Story"), while Canadian fans take pride in their pair's modest costumes and roll their eyes at the Russian's typical Siegfried and Roy-inspired attire and pretentiously serious choice of Massenet's "Meditation From Thais" for their musical accompaniment.

Sale and Pelletier's populist defenders have a point. Surely every time a figure skating fan demands that this sport be considered a serious art form, George Balanchine pirouettes wildly in his grave.

But artistry, of course, is always in the eye of the beholder, and Sale and Pelletier's "Love Story" was certainly enough to reduce NBC analysts Scott Hamilton and Sandra Bezic -- not to mention an entire stadium -- to dewy-eyed teenagers. And it could be persuasively argued that -- given the overt theatricality of figure skating (jump, spin and cry on cue) -- a treacly, emotion-drenched movie theme might actually play better to an audience than a turgid sonata.

Those who claim that figure skating is a subjective art are actually making a compelling argument for throwing the sport out of the Olympics. Even newer, judged entries in the Olympics, like snowboarding, have clear criteria that competitors are judged on, such as amplitude of their jumps, and the number of rotations in their spins. In the next most high-profile Olympic sport where subjectivity plays a role, ski-jumping, style points are factored in, but how far a ski-jumper actually flies almost always determines the winner.

Figure skating seems to be the only Olympic sport in which passion outranks objective criteria. Rather than basing scores on loosely defined "technical merit" and "presentation" (i.e., the "artistic" performance), perhaps skating officials need to break down the criteria further, so that specific aspects of the skating (spins, jumps, form and the difficulty in choreography) can be separately judged, and the judges held more clearly accountable for their final scores.

If figure skating is to remain a valued part of the Olympics, and to continue being treated as a real sport, it must be forced to conform to understandable measures of accomplishment, instead of relying on the whims and connivings of what often appears to be an extremely bitchy sewing circle. If skating officials refuse to clean up their act, then they should be booted from the games -- and then, considering how lucrative the sport has become -- we might see some real tears on the ice.