Football's big game has never been played outside in the cold North. But Giants Stadium needs some new luxury boxes ... 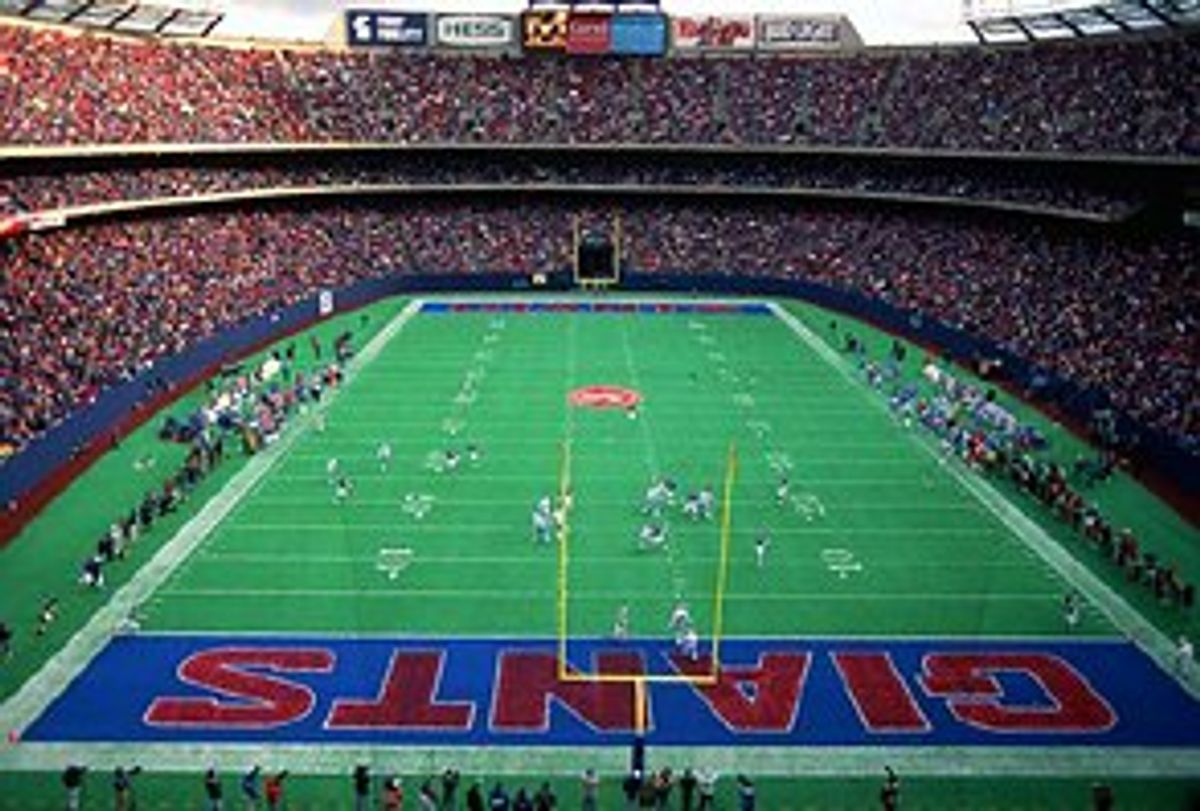 Is the NFL about to drive the Super Bowl into a snow bank?

The New York area has never hosted the Super Bowl because, according to current NFL rules, host cities must have an average outdoor temperature of at least 50 degrees on the date of the proposed Super Bowl. For Feb. 4, when the 2007 is scheduled, the average temperature in East Rutherford, N.J., home to Giants Stadium, is 31 degrees. If the weather is too cold, northern cities must offer a domed stadium, as Minneapolis and Detroit do, the only markets north of the Mason-Dixon Line to ever host a Super Bowl.

League owners, though, can modify those rules if the reasons are compelling enough. And so far, the motivations for the move have been presented as either a goodwill gesture for the New York metropolitan area in the wake of last year's devastating terrorist attack, or a strategy for returning the NFL to the days when real men played smashmouth football, rain, sleet, snow or shine.

But the real reason for the move seems to be more prosaic. Giants Stadium is getting old, and a Super Bowl could be the key to unlocking the funds necessary to fix it up.

Announcing the kickoff of a Super Bowl lobbying effort, Sen. Charles Schumer, D-N.Y., recently told reporters he'd like to take any skeptical NFL team owners on a tour of ground zero, "introduce them to some of the heroes of Sept. 11, and some of the families of some of the victims, so they can see firsthand just what holding the event here would mean."

But some observers are wondering if a Super Bowl five years from now will really carry much significance for anyone other than grateful area hotel owners.

"2007 seems a long ways away from standpoint of, 'Let's do something for old New York,'" says professor Stephen A. Greyser, who specializes in sports management at the Harvard Business School.

Then there's the supposed aim to return the NFL to its glory days, when Sunday warriors battled the elements, not just the opposition. Tagliabue, who grew up in Jersey City, not far from today's Giants Stadium, has spoken nostalgically about famous NFL frozen tundra contests as part of the league's "great tradition." Games like the 1958 Giants-Colts NFL championship (aka "The Greatest Game Ever Played," if you weren't sitting in the stands, that is), or the subzero championship game in 1962 between the Giants and the Green Bay Packers.

Just this past post-season, the New England Patriots and the Oakland Raiders slipped and slid around Foxboro Stadium as a snowstorm blanketed the region during their football game. Some sports pundits dubbed the game an instant classic. Yet during the entire first quarter there wasn't a single first down recorded, as both teams tried unsuccessfully to adjust to the elements, and simply punted the pigskin back and forth across the snow-covered field. Is that what the NFL wants to broadcast to the world come Super Bowl Sunday?

"For a quote, unquote, world championship event, you'd like the conditions to be ones that are not that onerous for players," says Greyser.

Besides, most football fans appear to like today's slick, fast-paced game and don't pine for the day when fullbacks were king or frozen players couldn't feel their limbs.

"I remember back when I played football. It's a very different game when it's cold out," recalls John Antil, associate professor of sports marketing at the University of Delaware, and a Super Bowl expert. "As a player there's no way I'd want to do that."

Not to mention the fans or halftime performers. Would U2 have agreed to perform during an outdoor Super Bowl held up north? "Playing outdoors in February in New York? That sounds like something we'd stay away from," says the band's manager Paul McGuinness.

It's also hard to understand why some team owners would support the plan. Why would the owner of a team like the Arizona Cardinals, which practices full-time and plays most of its games in warm weather, ever vote to play the Super Bowl up north knowing his team, if talented enough, might play the championship game at a distinct handicap because of wintry conditions when facing off against, for instance, the Pittsburgh Steelers?

"If I were an owner whose team played in warm weather, I wouldn't want an extra advantage for the other team," notes Antil. "It doesn't make sense." (Also, if the NFL grants a Super Bowl to Giants Stadium, wouldn't the league then have to entertain future bids from Chicago, Cleveland, even Green Bay for the right to host a domeless, cold-weather Super Bowl?)

Yet for now, the NFL's message seems to be that yes, it might be bitterly cold or even snowing come 2007 game day in New Jersey (the chance of precipitation there is one out of every three days in early February), but who cares?

Inclement weather "could add an exciting element to a Giants Super Bowl," wrote Giants executive vice president John Mara, in a recent Newark Star-Ledger Op-Ed, trying to rally support for the idea. As he conceded, "We'd be crossing our fingers on the weather."

But is crossing their fingers any way for owners to manage a multimillion-dollar sports bonanza that's evolved into an almost unofficial national holiday?

Antil is skeptical owners will go along with the deal, considering there's no economic advantage to having it at Giants Stadium for the league, its media partners, sponsors or the players.

But if the owners don't follow Tagliabue's lead and vote to reject the plan, there will be at least one big loser -- the owners of Giants Stadium. An instant sports mecca when it was built out of the Jersey swamp 25 years ago, the stadium, which is home to both the Jets and the Giants and whose parking lot has hosted more NFL tailgate parties than any other blacktop over the last quarter-century, is now showing its age.

And that's what some experts suspect the push for the 2007 Super Bowl is really about: a hunt for money to bail out Giants Stadium. Because the 2007 Super Bowl carrot comes with some NFL strings attached to the stick: $200 million in stadium renovations would be required first. The league's not looking for a temporary roof installed; instead it wants more restaurants, an NFL merchandise store on-site and lots of new luxury suites built to bring Giants Stadium in line with the amenities offered by the newest league facilities.

Washington, D.C., a city also hit by terrorist attacks and which has never hosted a Super Bowl, has also been discussed as a possible cold weather site if the NFL were to amend its host rules. But Tagliabue has been much more focused on securing the big game for Giants Stadium. Perhaps that's because the Washington Redskins play at the brand-new FedEx Field and the NFL wouldn't be able to leverage any new stadium improvements out of a D.C. Super Bowl deal.

Since the New Jersey Sports and Exposition Authority acts as the stadium's landlord, the state would have to pony up most of the money. ($100 million worth of updates were just done in 1998.) The question now is, will the lure of landing a Super Bowl five years from now encourage New Jersey, currently facing a $2.8 billion state budget shortfall, to support more renovations? (Giants V.P. Mara never alluded to the $200 million cost in his cheerleading Op-Ed in the Star-Ledger.)

"If I'm the New Jersey Sports Authority and I want a few improvements made to the stadium and I need public support, then yes, the Super Bowl makes all kind of sense," says Professor Antil.