Fueled by a nervous breakdown and primitive synthesizer technology, the Who created a 1971 album so great even classic-rock radio couldn't kill it. 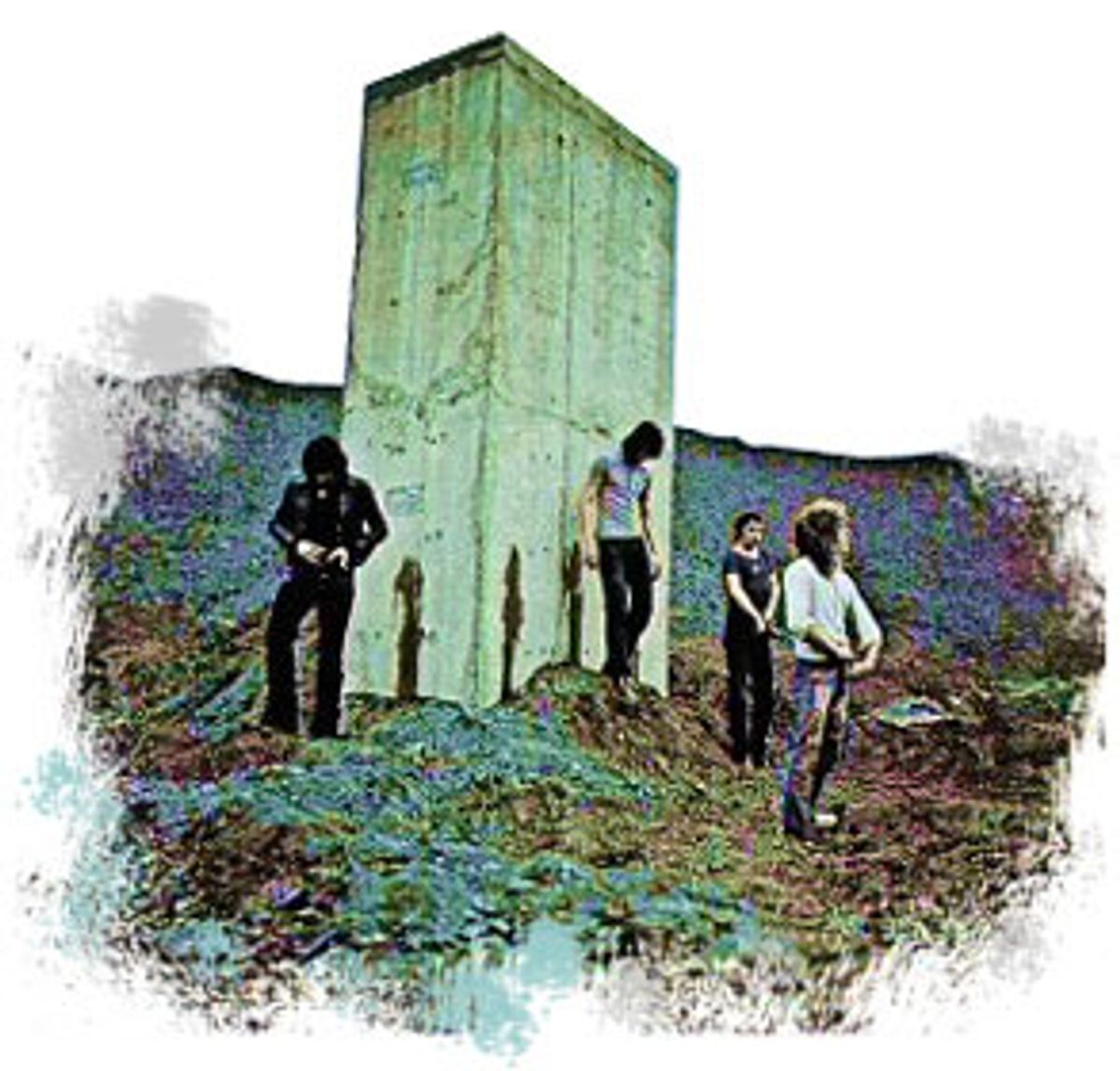 By that order of deduction, I reasoned that most of the music on the radio in 1982 -- at least the music that my 9-volt, battery-powered radio could pick up from the faraway radio signals of Chicago -- sucked. For every decent "Jack and Diane" there were many "Up Where We Belongs," for every OK "Tainted Love" there were 10 maudlin "Open Arms," for every J. Geils Band there were 15 Quarterflashes.

But hold that top-30 ditty. I was about to discover the bloody Who, a band whose members fought constantly, it seemed, onstage and offstage, and whose music vacillated between banal teenage angst and sophisticated adult angst. And the album I was on the verge of discovering, by way of public library checkouts and worn, borrowed eight-tracks, was "Who's Next," released more than a decade earlier, in 1971. It's an album that should have been a failure on many levels. On song after song, it blatantly mutes, deletes or ignores the Who's most combustible musical qualities and replaces them with elements that seem superfluous, or even grievously mistaken. Yet because of this album-long, stereotype-defying, musical running of red lights, "Who's Next" has remained a brain-blowing masterpiece of sonic joy.

One afternoon following an after-school band practice, the radio in my parents' sky-blue Ford LTD picked up that haunting synthesizer break toward the end of "Won't Get Fooled Again." Suddenly that synth pulse was broken up by a furious drum break that hiccuped to a halt and started right back up again. Then a scream that sounded like Satan on the rack, followed by menacing guitar chords and an epigram -- "Meet the new boss/ Same as the old boss" -- that I would hear repeated in some manner every day the rest of my life. Finally, six heavy downbeats signaled the end of the song -- no pussified fade-outs here.

It lasted less than two minutes, but the end of this song hooked me on the horrible Who, a band that would break up in December of that fateful year of 1982. I read books and articles about them, checked out their records from the public library, saved up allowance money to buy my very own copies. The more I learned about them the more I loved them. They ended concerts by smashing all their equipment, then went back to the hotel and smashed that up too. They wrote smart songs that soared and rocked and begged to be played loud. They were even on the cover of Time magazine, a periodical I read at my grandparents' house. That Time article didn't condescend to the band and in fact took it seriously, the way Time magazine took Jimmy Carter and Henry Kissinger and sometimes Ronald Reagan seriously. Rick Springfield certainly didn't get taken seriously by Time magazine.

Twenty years later I am still unable to look at any of the band's work objectively, particularly the record that contains "Won't Get Fooled Again." That record is of course "Who's Next," which, at least on paper, looks like it should have been a total dud.

Before the final copy had even been pressed, the album had nearly destroyed its creator. Initially, the songs on "Who's Next" were part of a grandiose science-fiction film/concert concept called "Lifehouse" that even Who guitarist/songwriter/idea man Pete Townshend could barely grasp (although he has since resurrected it). After that bigger, ambitious project fell apart, Townshend suffered a nervous breakdown and a regular old album was patched together so the band could salvage whatever it could from the "Lifehouse" failure.

In fact, the tracks that were left off the album -- "Pure and Easy," "Naked Eye," "Join Together," "Water" and others that have surfaced on compilations and CD reissues since -- could have made up a great, completely different Who album on their own. As it stands, however, the nine songs that make up the initial "Who's Next" present the same contradictions and masterly ensemble work that made the Who so fucking great to begin with.

From beginning to end, "Who's Next" showcases Townshend's fascination with the synthesizer, an instrument that really had no business being embraced by the Who. Months earlier the band had released "Live at Leeds," a roaring, soaring, daredevil guide to improvisational ensemble playing if ever there was one. The 13-minute rendition of "My Generation" the Who pulls off on "Leeds" is so wild it needs a traffic cop. A synthesizer on "Leeds" would sound like Britney Spears auditioning for Metallica.

Yet Townshend's mastery of the primitive ARP synth -- at the time more complicated than a NASA launch and bigger than most London neighborhoods -- added a spectral presence to the band, and on this album it really became a fifth member. On "The Song Is Over," the synth adds a lush, orchestral-yet-funky feel to the stew. On "Bargain," it brings a deified presence to a song that's really a prayer. And on "Won't Get Fooled Again," the synth's meter brings a precise rhythm track that allows the rest of the band -- especially bassist John Entwistle, who was usually the group's de facto percussionist behind Keith Moon's maniacal drumwork -- to play wildly around it without fear of getting lost.

The opening track on "Who's Next" is "Baba O'Riley," which should likewise be a complete failure as a song. It starts slowly, introduced by a synthesizer imitating an Irish jig. Then a piano comes in. A piano? In the bloody Who? Preceded by a synthesizer? Wouldn't these instruments get smashed up in one of Moon's tantrums?

Then Moon himself enters the song, pounding out a marching beat. Somehow he manages to hit a ride cymbal throughout the entire song, an audio "error" that became blatantly apparent after the introduction of digital technology in the 1980s. I know this because I listened to the LP at least twice a day back then, and when I finally switched to CDs, "Who's Next" sounded like a completely different album. That perpetual ride cymbal was nowhere near as apparent on the LP (either that or my secondhand record player just couldn't pick it up). Here, Moon's ride cymbal work sounds like static underneath the whole song. Maybe producer Glyn Johns tried to persuade Moon to cool it and then simply gave up.

Midway through the song, Townshend takes over for Roger Daltrey and sings a couple of lines. During that sequence, the rage-addled, guitar-smashing, lead singer-decking, brandy-inhaling genius sounds like a whiny little girl, his high-pitched voice squeezing out the lines, "Don't cry/ Don't raise your eye/ It's only teenage wasteland." Those lines add another weird wrinkle to the album: The title of its most overplayed song does not appear in the lyrics, causing Who neophytes and generations of clueless classic-rock D.J.s to identify the track as "Teenage Wasteland." (For what it's worth, Townshend's title purportedly refers to spiritual guru Meher Baba and minimalist composer Terry Riley, an influence on the orchestration and arrangement here.)

The song ends with a violin solo. Yeah, a violin solo ending a bloody Who song. My music-major buddies tell me it's wrong to end a song with a solo of any kind, much less a violin. Either way, hired gun Dave Arbus (apparently a pal of Moon's, of all people) somehow saws that song toward one hell of a climax, with Townshend, Moon and Entwistle accelerating around him like a pack of sharks in a musical feeding frenzy.

"Bargain" is a classic Who moment that strangely vacillates between the band firing on all cylinders again and softer lyrical introspection. A subdued Townshend again tackles the softer vocal additions, while Moon drives the faster portions with another classic percussion performance.

The lone number written and sung by John Entwistle, "My Wife," is typical in that it spotlights the bassist's black humor and unusual in that it showcases a horn section. If that's the right way to describe several different horns all played by Entwistle, perhaps the only rock 'n' roll bass player who could have doubled as an orchestral French horn player. And at the beginning of the song, a disciplined Keith Moon sounds like he's actually using restraint with his eighth notes to keep the band at one tempo.

"Gettin' in Tune," "Goin' Mobile" and "Love Ain't for Keepin'" are three nice "Lifehouse" holdovers that form the middle of the album. "Goin' Mobile" revisits a "Bargain"-like use of the synthesizer, while the softer "Love Ain't for Keepin'" presents a folksier Who playing acoustic guitars and belting out impressive vocal harmonies. "Gettin' in Tune" starts with a piano part, then segues into a power chord-driven jam toward the end.

"The Song Is Over" is a tune that would have benefited from the proximity of some of the songs dropped from the final version of the album. Had this song been immediately followed by the omitted "Pure and Easy," as the Who often performed them, the one-two punch of songs dealing with human (or perhaps male human) disconnection would have been profound. As it stands, however, "The Song Is Over" again presents the sharply contrasting vocal styles of Daltrey and Townshend over some great piano and guitar work.

"Behind Blue Eyes," another classic-rock staple, is the most typical Who song on "Who's Next." It contains no synthesizer or weird instrumentation. For the first couple of minutes, it also contains no Keith Moon. The vocal harmonies in this early part of the song are extraordinary; God knows how Johns got that band to sit still long enough to record them properly.

The song ends, of course, in a typical Who rage, a softer coda revisiting the first line before the opening power chords of "Won't Get Fooled Again" launches the band off again. This tour de force, with which the Who ended nearly every concert from the release of "Who's Next" on, puts all the band's cards on the table: thunderous, gravity-defying drumwork; reckless guitar solos and vicious power chords; hyperactive bass playing; and vocals driven by sheer rage, all backed by that spooky synthesizer. It still sounds just about as amazing to me as it did in the back seat of that LTD.

This morning, as I sat working this article, I heard snippets of the "Who's Next" songs in a commercial for a Who concert scheduled for Chicago this August. Twenty years ago, such an announcement would have driven me into a sleepless, "Happy Jack," sleeping-out-for-tickets frenzy. This time around, I smiled and grinned at the change all around me. The Who have been on many, many reunion tours. The band has broken vows of retirement every year, it seems, since 1982. The Who's music is used to sell gas-guzzling SUVs, presumably for goin' mobile.

It's easy for rock snobs to point the finger of derision at Townshend's giant proboscis and say, "You should have quit when Keith Moon died." But old as the surviving members may be, they still put on a compelling live show; witness their ass-whupping performance at last fall's Concert for New York City.

At first I didn't feel so great about "Who's Next" being whored out to sell four-wheel-drive vehicles and other consumables. But if that otherworldly synthesizer part on "Won't Get Fooled Again" -- followed by that evil drum kick -- drags one more 12-year-old kid face to face with "Who's Next," in all its contradictory anger and glory, it might be worth it.

Dave Wilson is a writer living in Chicago.