Too Bizzaro for words

Richard Bizzaro could serve 20 years for disrupting a recent Delta flight. Was he actually acting out the heroic impulses we're supposed to be cultivating? 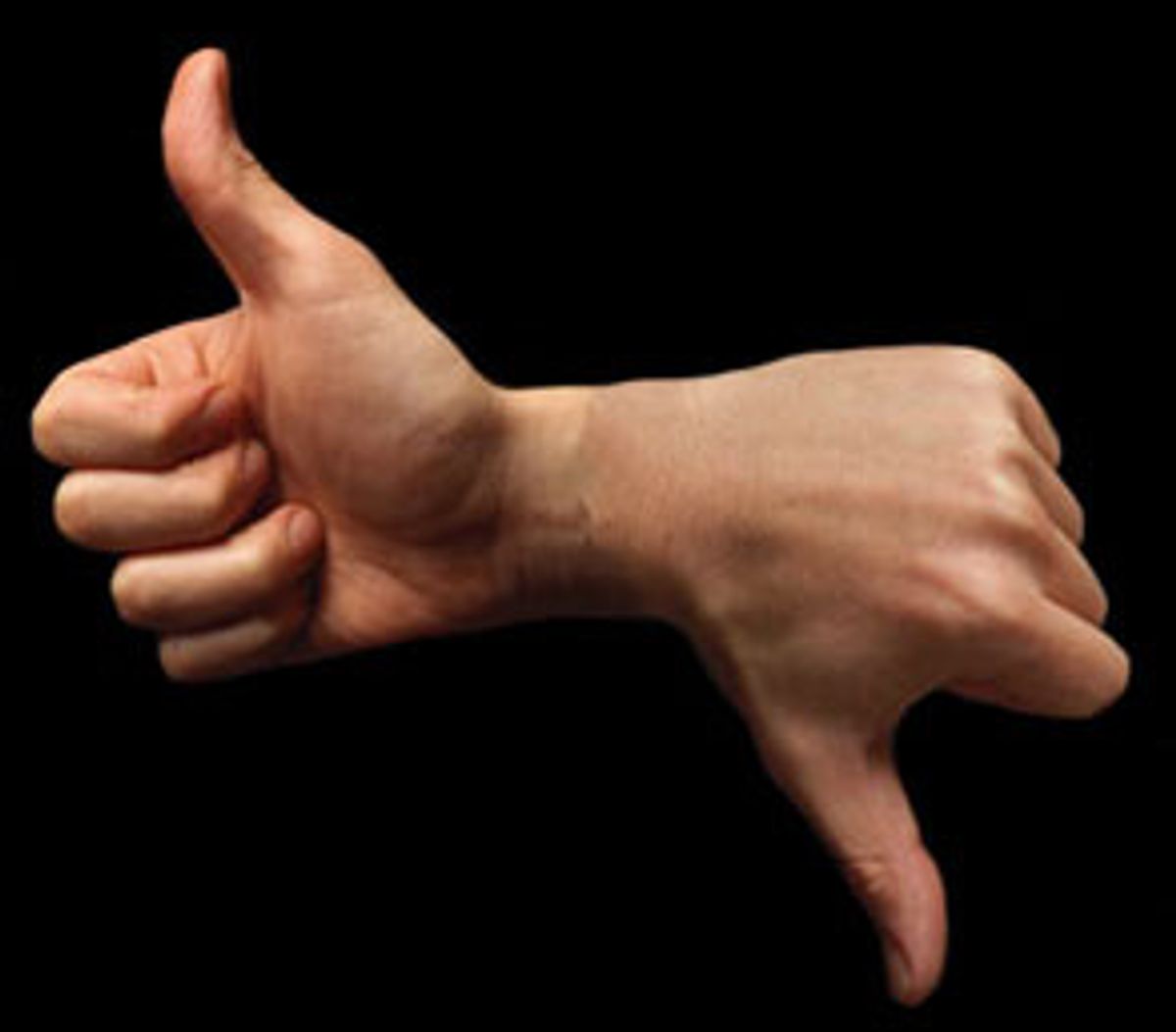 When Delta Air Lines passenger Richard Bizzaro was led off his Feb. 9 flight in handcuffs and accused of interfering with the flight crew -- a charge that could earn him 20 years in jail or a $250,000 fine -- most people took him for just another nut oblivious to post-Sept. 11 airline decorum. Indeed, defying federal air marshals seems to border on insanity. But in our haste to purge the skies of kooks and crackpots, we might well have overlooked a significant possibility: Richard Bizzaro displayed nothing less than patriotism, vigilance and heroism -- the very qualities we've all cultivated in ourselves since air travel changed forever five months ago.

It started in the bathroom. Bizzaro, the CEO of an herbal supplements marketing company, was on his way to Salt Lake City and had gotten up to use the lavatory. In conjunction with the tight Olympics security, a new federal law forbids passengers from leaving their seat during the first and last 30 minutes of all Salt Lake City flights. Bizzaro entered the lavatory about 25 minutes before landing, and as he left it, he was confronted by a flight attendant. According to the attendant's account, Bizzaro -- who is 6-foot-2 and weighs about 220 pounds -- silently stared her down. Then he returned to his seat, at which point things took a turn for, well, the bizarro.

This comes from an FBI statement recounting the incident:

"[Special agent] Illes observed Bizzaro give what he believed to be a hand communication or 'thumb's up' to another passenger seated in 2A. At this time, air marshals on the flight took control of both the first class and coach cabins. In the first class cabin, Demarest and Illes identified themselves, displayed their badges, and instructed the passengers to remain seated facing forward with their hands visible and on top of their heads. The passengers complied, however Mr. Bizzaro kept lowering his hands, leaning into the aisle, and turning around to look aft toward the coach cabin. He continued this behavior despite Special Agent Demarest's repeated instruction to keep his hands on the top of his head and face forward."

Understandably, most media accounts of the incident give an impression of Bizzaro as obnoxious and belligerent -- the kind of guy who bullies flight attendants and thinks himself above such trivialities as airline regulations. This may or may not be the case. Either way, it's irrelevant to the fact that in a slightly different scenario, Bizzaro could have been America's next Todd Beamer or Mark Bingham.

Bizzaro tried to explain his actions in a statement released last week through his lawyer.

"When the young men claiming to be sky marshals directed everyone in the plane to place their hands on their heads, I did not initially believe them. They were dressed in street clothes and one of them wore a ball cap backwards. They did not give the appearance that they were law enforcement officers and I did not pay them the proper respect. I believed I was witnessing a hijacking of our airplane."

The details here matter, and they vary widely. Did Bizzaro sleep through the announcements asking passengers not to leave their seats for the first and last 30 minutes of the flight -- as he alleges -- or was he awake, as the marshals report? Did he try to intimidate the flight attendant? Or was she rude to him? Did he give a thumbs-up to one of his neighbors, as the marshal's account alleges? Or did he do no such thing, as Bizzaro insists?

Regardless of how disruptive or obnoxious Bizzaro was or wasn't, his account suggests he was doing exactly what all airplane passengers have been instructed to do since Sept. 11: be vigilant. In the wake of the attacks in New York and Washington, Americans face a strange new conundrum. We want stealthy in-flight security systems, but we're also primed to be on the lookout for stealth. In his State of the Union speech, President Bush himself singled out the watchfulness of the American Airlines flight attendant who noticed Richard Reid -- the alleged "shoebomber" -- behaving strangely on a flight from Paris to Miami. In this new culture of civic valor and heightened alert, how do we distinguish potential heroes from belligerent troublemakers?

After his run-in with the flight attendant, Bizzaro returned to his seat. Unbeknownst to him, the attendant had consulted with the three air marshals on the plane, who had decided to take control of the flight. Watching three men order the plane's passengers to place their hands on their heads, Bizzaro sensed danger, according to his statement: Even after the men identified themselves as marshals, he remained skeptical, and readied himself to defend the plane. Given current levels of jumpiness, and the aura of mystery that surrounds the Federal Air Marshal program, it's not hard to see how Bizzaro could have mistaken the air marshals for hijackers.

The FAA's air marshal program, introduced first in the '70s, was expanded in the mid-'80s after the hijacking of TWA flight 847 in 1985. In those days, too, passengers were on the lookout for suspicious midflight behavior, but the atmosphere was different. Back then, says Jerry VanCook, a former police officer who now writes training manuals for undercover officers, "The passengers on a hijacked plane might have thought, We'll go to Havana for a few hours, then be home." In those days, says VanCook, the safest thing to do was be passive with the hijackers. "Before 9/11, that's what I would have done. That was the wise thing to do. Everything has changed."

But just as we've learned not to sit back and let the terrorists do their bidding, Americans are less likely than ever to trust an I.D. at first glance.

Last month, an armed, Arab-American secret service agent on his way to protect Bush in Crawford, Texas, was barred from flying, at the request of the pilot. Military, police and secret service officers are permitted to travel armed, as long as they carry documentation for the weapons, as this man had. That American Airlines authorities thought to double-check the man's credentials isn't surprising. But he remained barred from the flight even after displaying his Secret Service I.D. and offering the phone number to his supervisor at the White House. If you look suspicious, the story suggests, no amount of credentials will get you through the door. Americans have, by and large, learned to trust intuition over documents and badges.

Just as the secret service agent didn't fit the pilot's idea of what agents are supposed to look like, the air marshals didn't match Bizzaro's expectations. They were "young enough to be my grandchildren," he claims, and "wearing baseball caps."

According to the FBI report, it was only after inspecting the marshals' credentials -- not just their I.D. badges, but their identifying paperwork -- that Bizzaro cooperated. The press has been unsympathetic, but how many Americans do know what a Federal Air Marshal I.D. looks like? Who can tell the difference between a real one and a fake one? A flight attendant, presumably. But how much damage could an overly cautious group of passengers do to an innocent air marshal before the flight attendant can clear things up?

"There has to be a way for air marshals to identify themselves real fast, a unique I.D. that would be extremely hard to counterfeit," VanCook says. "Everybody ought to know it when you see it. You know what a $5 bill looks like. You don't have to stop. The general public needs to be able to say immediately, 'This is a real sky marshal.'"

VanCook speculates that had Bizzaro gained the confidence of his fellow passengers, the situation could have turned tragic.

"My immediate thought is that this, theoretically, could go back and forth several times. The air marshals could stand up and identify themselves, and the passenger could say, 'I don't believe you.' And, if he's a charismatic personality, he could get the rest of the plane to rise up against the air marshal. What if you identified yourself as an air marshal, and all the innocent passengers don't believe you and attack you. Are you going to shoot them?"

Certainly, mix-ups like Bizzaro's are one of the hazards of doing undercover work. But in a climate as skittish as this one, the FAA's steadfast refusal to shed any light on the details of the air marshal program does not seem to be helping to prevent such incidents.

Most ordinary airline passengers are in the dark about how the Federal Air Marshal program works. "I don't really know much about the air marshals," said John Hoxsey, who recently flew from Boise, Idaho, to Oakland, Calif. "I assume they're on most of the flights I take, at least the long ones. But are they armed? Do they carry I.D.? Do the pilots know who they are?"

The FAA won't answer these questions, and generally maintains a high level of secrecy around the program. Unless the Transportation Security Administration decides to position marshals on each of the nation's 30,000-plus daily flights, the agents will have to travel incognito to disguise their numbers.

Airline security insiders say that flight attendants and pilots are routinely informed when an air marshal is on their flight (just as they're also informed of other police or military passengers who are armed) and where he or she is sitting.

"If I'm a passenger on an airplane," says Charlie LeBlanc, managing director of Air Security, a private consulting firm, "and someone stands up and says they're an air marshal, the first thing I'm going to do is look for a flight attendant to see how they are reacting. Because the cockpit is locked. You are not going to get any help from the cockpit crew. It's you and the flight attendant. If I see a reaction from them, like 'This guy's not a marshal,' I'm an aggressive enough individual that I would challenge that person."

Of course, no matter how sophisticated the air marshal program becomes over time, it may be that no one will be able to save the plane from terrorist attack. Clifford Egan, an expert on American military history at the University of Houston, says it could just come down to who can overpower whom.

"In the case of the World Trade Center, there were [four or five] terrorists on board each plane. So is one air marshal going to have the ability to stop these five terrorists, who are not stupid -- they may be spread out on the plane. And, when an attempted hijacking takes place, there's the possibility that they'd attack the air marshal."

There's no foolproof way to run the air marshal program; in the end it's just another stab at preventing the kind of attack that took everyone by surprise on Sept. 11. What Bizzaro's case makes clear is that multiple security measures, layered one upon the other, do not necessarily have the cumulative effect of greater security. It's not hard to imagine how Delta flight 1540 could have been a victim of one passenger's own vigilance.