Some may listen to the secretary of state about condom use, but a call girl offers her condom cues instead. 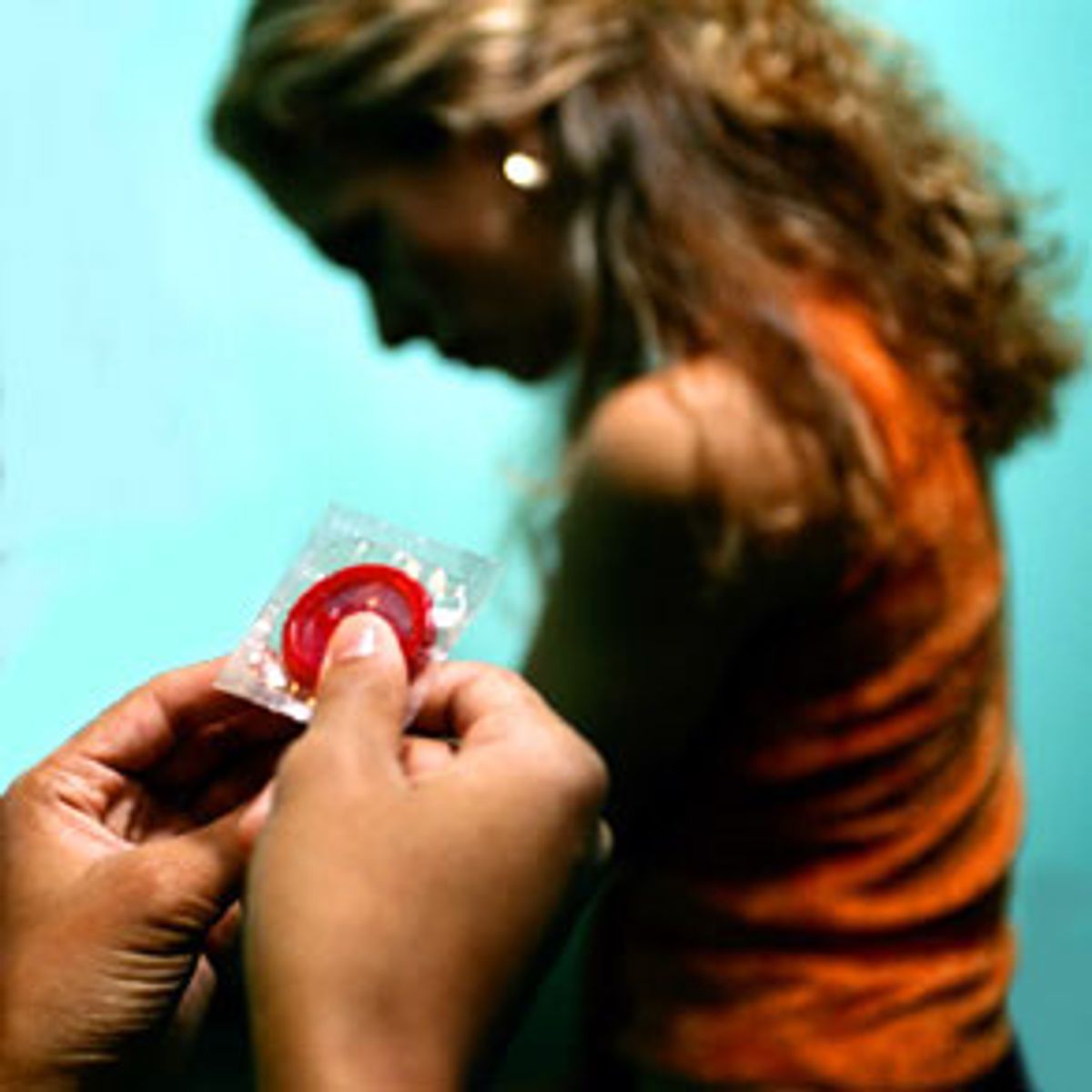 Last Thursday, Secretary of State Colin Powell caused a stir by announcing that he favors such sensible measures as condom use and contraception for sexually active teens. This is like coming out in favor of infant safety seats and traffic lights -- or saying you're opposed to putting tinfoil in the microwave.

Except that it's not. And it puts him way to the left of those (including President Bush) who have pandered to the Christian right by urging Congress to invest in abstinence. Recently, Bush announced that he would propose a $135 million investment in "just say no" programs for teens who might be tempted to experiment, not only with sex, but with, gasp, condoms.

This Republican marketing strategy offers abstinence to crusading wing nuts, safe sex to public-health wonks and a combination of both to ambivalent parents. On this issue, at this moment, the administration is almost like a well-run American brothel offering a diversity of wholesome blondes, smoldering brunettes, ethnic beauties and spunky redheads. Something for everybody.

It's easy to demonize, lampoon or categorize Powell's Christian right detractors. But abstinence, less than a decade ago, was championed by Americans very far from the religious right. Hillary Clinton, in her moderate manifesto, "It Takes A Village," wanted teenagers to abstain from sex until the age of 21 -- despite the fact that the age of consent in many American states is 16. Remember Donna Shalala, former secretary of health and human services? Certainly not a woman you would describe as a right-wing demagogue. In 1997, Shalala launched a teen abstinence campaign that included -- according to Katie Roiphe's provocative account -- support for the "secondary virginity movement," which is a way for sexually experienced teens to redefine themselves as virgins. Without even having her hymen surgically restored, a young woman could proclaim herself a virgin by taking a chastity oath. Lunacy about teen sexuality is not the exclusive property of the lunatic fringe.

By endorsing condom use, Powell is aligning himself with realists who acknowledge that most human beings will eventually start having sex. There are those who insist that teenagers aren't "ready" for sex, but sometimes I wonder how many adults are truly ready for sex. There's a strange kind of hypocrisy surrounding teen sexuality that has nothing to do with religion or government spending - it's based, rather, on the notion that adults are sexually mature by virtue of their chronological age.

Perhaps Bush and Powell should talk to some sexually active adolescents. For example, when I was a sexually active teenager, I carefully protected myself from pregnancy because I wanted to prove that I was grown-up enough to have a sex life. I thought an accidental pregnancy would somehow disqualify me from adulthood. Later, I discovered that real grown-ups do not have to set such high standards for themselves because nobody is telling them that they're too young for sex. We talk about the "epidemic" of teen pregnancy but why do we never hear about an "epidemic" of unplanned pregnancies among adult women?

Every mistake a teenager makes in the realm of sex is pathologized by conservatives and liberals alike, despite the fact that most of these mistakes are also made by women well into their 30s. In fact, adults above the age of consent must account for the majority of unplanned pregnancies, abortions and STD cases. Why, then, do we project our anxieties about sexual risk onto this temporarily disenfranchised group of people -- teenagers? Is it because we're afraid they'll outdo us in some way? Are adults embarrassed about the mistakes they've made even when they should have known better?

A few tips from a professional: Promiscuity, done right, is an inherently nerdlike pursuit that requires discipline, practice and forethought. You can't just throw condoms at an STD epidemic if people don't know how to use them properly. Anyone who has spent time convincing the public to use condoms, teaching people how to put them on (and get them to stay on) and distributing them on street corners, can tell you this. So, of course, can any competent sex worker. It's easier to be methodical about sex when it's your job. Romance is not an ideal setting in which to study safe sex because few people want to calculate their every move while having sex purely for pleasure. Safe sex might even be regarded as a strange form of erotic sublimation by those who require unplanned passion. This could explain the reluctance of some teenagers to use condoms, but what can explain the same reluctance in adults?

Actually, many adults haven't got a clue about the basics of condom use. These are the adults who complain that condoms are not 100 percent effective because "they break." Indeed, sex with a condom is never as safe as abstinence, but many sex workers have observed that condoms don't break when you keep a tube of KY or a bottle of Astroglide next to your bed. (No, you should not rely on the fact that a condom is already lubricated by the manufacturer. That merely makes it easier to put the condom on.)

There was a time not long ago when the only lubricant at the local drugstore was KY jelly and you could only find Astroglide in sex boutiques. But KY now comes in two "flavors" -- liquid or jelly -- and good lubricants are not exactly hard to find. Still, a lot of people over 30 aren't schooled in the fundamentals of lubricating latex. A person conscientious enough to use condoms might not realize that a synthetic lubricant is essential -- to prevent breakage, discomfort and other erotic snafus. This is an aspect of contraception and STD prevention that the abstinence lobby would banish from any curriculum because it hints at teaching people how to be "good in bed." But you can't effectively teach teenagers about birth control without discussing the politically dicey subject of sexual skill.

And all those adults who have abortions because of broken condoms? They were once teenagers.

There are other aspects of condom etiquette that many adults aren't clued into, which need to be part of any sex education program. For example, many people are disenchanted with condoms because of the aftertaste. Switching from intercourse to oral sex can be awkward if you haven't learned to think of mid-sex grooming as a natural aspect of intimacy. Too many people assume that washing up is something you do after, not during, sex. A woman can gracefully get out of bed, head for the bathroom and privately rinse herself free of condom aftertaste without ruining the mood. Call girls do it all the time and it gets easier with practice.