Sleeping with the enemy

Two men -- an Israeli Jew and a Palestinian Muslim -- risk harassment, jail and death for their love. 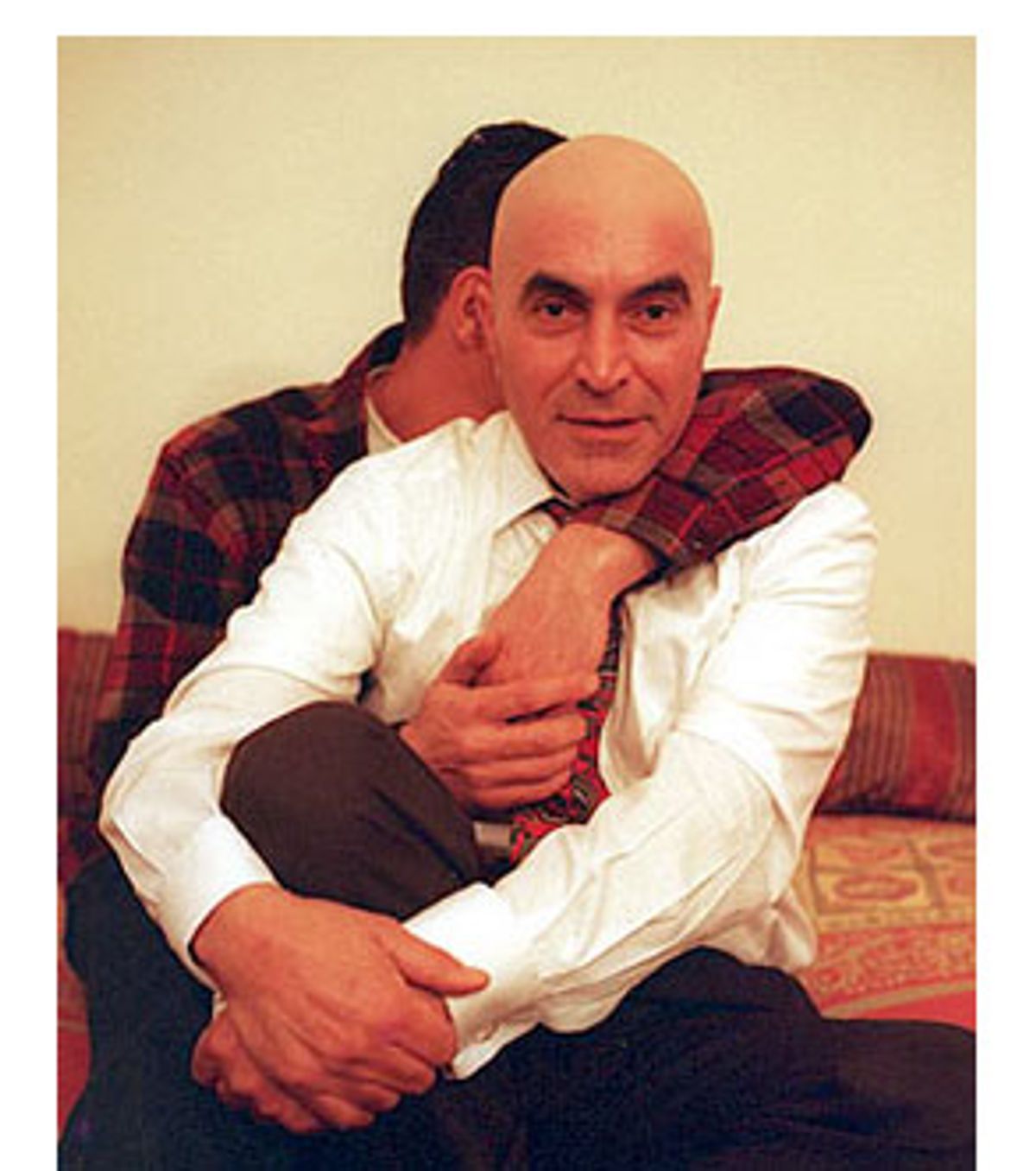 After nuns kissing rabbis and wolves necking with sheep, Ezra and Selim could feature in Benetton's next advertisement campaign. Ezra, an Israeli Jew, and Selim, a Palestinian Muslim, live, sleep -- and hide together.

The gay couple faces arrest at any moment: Selim for being illegally on Israeli soil, Ezra for helping, hiring and sheltering him. They took time off, on Valentine's Day, to describe their personal hell.

"We feel like rats. They run after us all the time," says Ezra Yitzhak, the head of a successful plumbing business where Selim also works. "We have to think carefully about where to go, who to go with and always have papers ready to explain our situation."

Their situation is unusual in the extreme. At a time when even sympathizing with the other side is enough to be called a "traitor," an "Arab-lover" or a "collaborator," Ezra and Selim broadcast their love for one another. And in conservative societies where sexuality is rarely discussed, the two are openly gay.

When Ezra accompanies Selim on family visits in the West Bank city of Ramallah every other week, Selim's parents greet Ezra warmly, sometimes even arranging for armed security men to stand guard by the door. (Palestinian neighbors are not so open-minded about homosexuality and Israeli friends, so Selim chose a pseudonym for this article to avoid embarrassing his family.) Selim is also welcome in Ezra's family in Jerusalem. Ezra's mother would prefer that he see a nice Jewish boy, but "it's a Jewish mother's problem," he says, and his brother and nephews accept Selim wholeheartedly.

"For me, it feels normal. I've been working with Arabs since 1967," says Ezra. "But of course it's totally unusual. In Israeli society, its normal for Arabs to be janitors or garage workers. But here we are on par, living together, going to restaurants and movie theaters together."

"When people ask me [about Ezra] I say yes, I have an Israeli friend," says Selim. "They accept me as I am." Perhaps because he fought and was jailed during the first intifada, Selim has never been accused of being a collaborator.

Selim, 26, is tall, shy and doe-eyed. He was locked up for two years for throwing stones as a teenager during the first intifada, released when the Oslo peace accords were signed and thrown back in jail for stealing a car. Ezra, 50, shorter and bald, has striking eyebrows, sophisticated tastes and fluent English. The pair met in the streets of Jerusalem and had a fling about six years ago. Three years later, Ezra and Selim bumped into each other again and became a steady couple. They've been living together in Ezra's Jerusalem apartment ever since.

"Selim was a product of the occupation: no school, nothing to look forward to, put in jail automatically, " says Ezra. "Since he's been with me, it's been the best period of his life: He's working, his health has improved, he's more relaxed."

Ezra's love opened new vistas for Selim: steady employment, clubbing in Tel Aviv, movies in Jerusalem -- activities that Palestinians often don't have access to, but the current armed uprising abruptly ended all that.

Repeat terrorist attacks in downtown Jerusalem mean people with Arab complexions can't walk two blocks without being carded these days. "I can't count the number of times we've been stopped together," says Ezra. Usually Ezra's eloquent patter, a few documents (including a precious letter from the Israeli security services that states Selim presents no known security risk) and well-placed phone calls solve things on the spot.

In October 2000, at the beginning of the current conflict, Selim was sentenced to eight months in jail for residing illegally in Israel. He was released after three months when Ezra appealed the verdict and the judge recognized that Selim was in Israel due to personal circumstances. The last time they were stopped was just two weeks ago in Jerusalem when security people yelled through a megaphone "Red Toyota -- stop!" They were searched down to their shoes and questioned for 30 minutes until Ezra managed to convince the police to let them go.

So, apart from driving to plumbing maintenance jobs around town, they avoid going out as much as possible. "Because of the situation, [Selim] is now 24 hours a day with me. Sometimes it's fun but sometimes it's not easy," says Ezra. They've stopped going to Tel Aviv, preferring instead the mixed Jewish-Arab port town of Jaffa, where Selim looks less conspicuous. They watch videos rather than movies. And Ezra tells Selim to wear a coat at all times in case he gets arrested.

Mixed Israeli-Palestinian couples are very rare, but in most cases marriage confers Israeli residency rights to the Palestinian spouse. In Ezra and Selim's case, that legal option doesn't exist. Although they signed a notarized document establishing the fact that they are domestic partners willing to share all their belongings, the move hasn't helped their case so far. Selim's criminal record is one obstacle; being gay might be another, although Ezra and Selim see their quandary as a case of discrimination against Arabs more than anything else. "If Selim were an illegal resident from Russia, everything would be fine," says Ezra. "But this guy, who was born here, whose family has lived here for hundreds of years, isn't allowed to go two to three kilometers [from Ramallah to Jerusalem]."

The Jerusalem Open House, a one-of-kind organization that provides supports for gays and lesbians in Jerusalem and in the West Bank, is helping to publicize their case. "In many ways [Selim] should have been the poster boy of the Oslo agreement," says Hagai El-Ad, the organization's director. "He was engaged in terror during the first intifada, and now after a turn-about he's in love and living with an Israeli." El-Ad hopes to raise Selim's plight with Israeli Prime Minister Ariel Sharon in a meeting that could take place as early as today; the group wants Sharon's government to blast bureaucratic hurdles and give Selim the Jerusalem ID papers he badly needs. (El-Ad knows of at least one precedent when the late Prime Minister Yitzhak Rabin granted residency rights to a Palestinian from Gaza who wanted to live with his partner in Tel Aviv.)

With residency rights, "I would be more quiet, less anxious. Every time I'm stopped, I get upset," says Selim. Half Selim's family was born in Jerusalem and therefore has Jerusalem IDs. But Selim, born in Ramallah a few miles north, has no residency rights and must tiptoe in Jerusalem, moving about like Ezra's anxious shadow.

"I'm twice his age; I'm realistic. We're not going to marry or adopt children," says Ezra. "We just want to lead our life and let it develop naturally. I would like Selim to have the freedom to choose to reduce the intensity of our relationship, look for a wife, whatever. The situation has partly forced us together. I don't want another jail for Selim. Right now, we're together whether we want it or not."

Last time Selim was jailed, "he looked like a caged animal; his eyes were full of terror," recalled Ezra. "His body and soul wouldn't survive another stay in jail. He would collapse as a person, and I would feel a sort of Palestinian need for revenge. I would hate those who killed him. I don't want to hate my country." Ezra sees himself as a loyal citizen: He's politically engaged, pays taxes, served three years in the army (like most Israeli men) and fought the 1973 Yom Kippur War. "I don't want to fight against the state," he says.

As it is, Ezra frequently finds himself on the Palestinian side of things. He takes communal taxis with Selim and other Palestinian workers, walks through hills and valleys to avoid Israeli-manned checkpoints and has had bullets and tear gas fired in his direction by Israeli soldiers. In addition to helping Selim stay illegally in Jerusalem, Ezra also frequently breaks the law that bars Israeli civilians from entering Palestinian-ruled areas.

Several Israeli businessmen -- including men like Ezra, who felt they had privileged connections with Palestinians -- have been killed in Palestinian-controlled towns in the recent past. All it takes is a hotheaded Palestinian who wants to make a name for himself by gunning down an Israeli. Crazy enough to wander the streets of Ramallah in a time of war, Ezra would be an easy target. But he feels somehow immune. "Friends warn me not to do it. But unlike those who were killed, I'm not going for business. I'm going door to door. Selim's family is waiting for me. I say this without modesty: I feel part of them, and I think I know the code."

He was scandalized when an Israeli policeman took him aside once and asked: Aren't you afraid Selim will kill you? "The relationship between Jews and Arabs can only be one way. We are the masters and they are the servants," says Ezra. Most Israelis "can't imagine an equal relationship. Palestinians are like Indian immigrants cleaning the floors at Heathrow airport -- they're transparent."

Ezra also dismisses the suggestion that right wing Jews might target him for publicly revealing his love for a Palestinian. "I may be gay, but I'm not a sissy," says Ezra.