Kevin Costner makes a 1-800 connection with the next world in this piece of gauzy supernatural hokum. 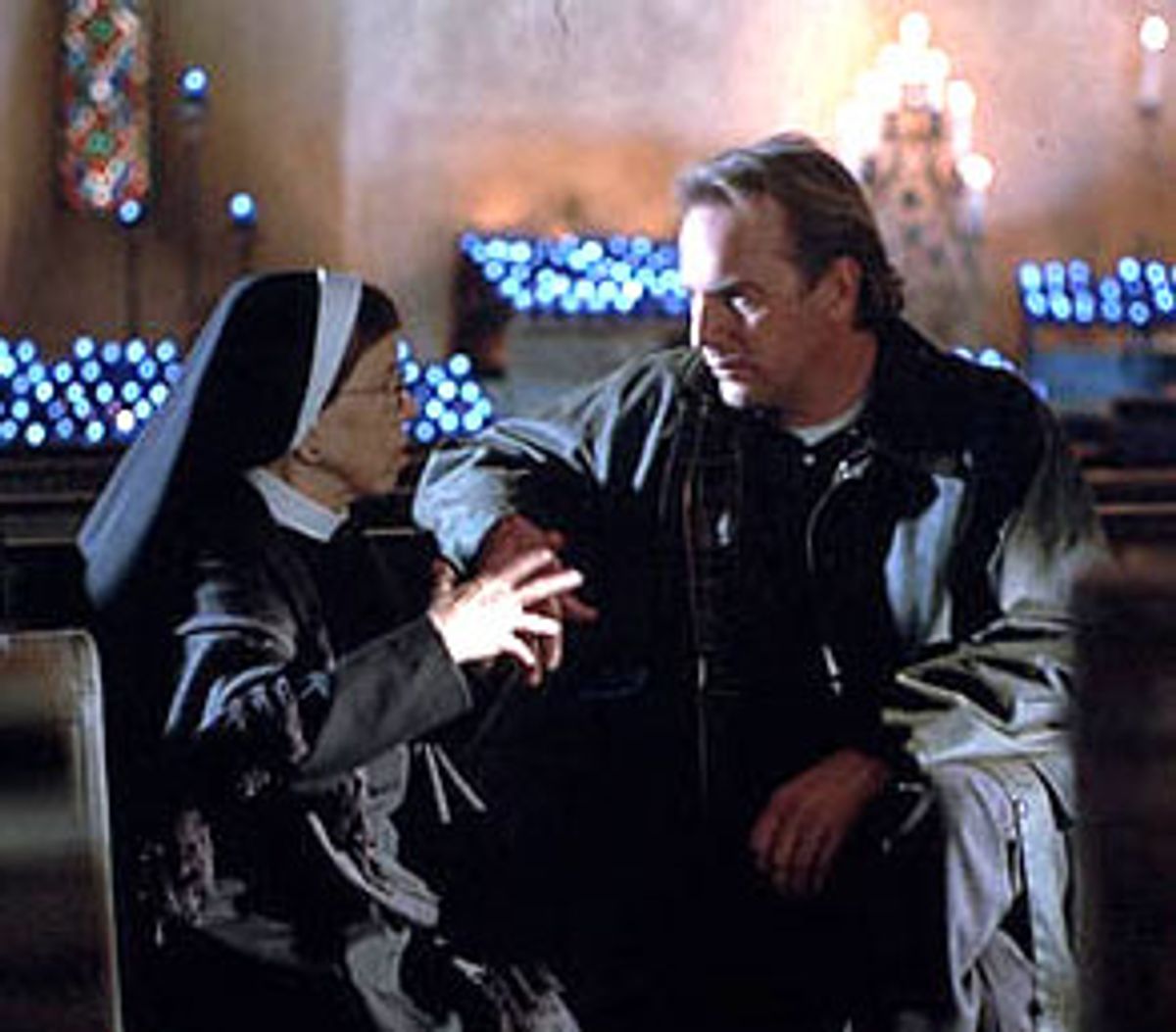 Since when have movie theaters become the new churches? I'm not talking about the way many of us have found transcendence in, say, watching Fred Astaire and Ginger Rogers skitter and sweep across the dance floor, or in succumbing to movies that touch the very core of us, from the Apu Trilogy to "McCabe and Mrs. Miller" to "The Rules of the Game." I'm talking about movies like "The Sixth Sense" and the new "Dragonfly" (both of which have their genesis in the life-after-death weeper "Ghost") that are nothing but pure science-fiction hokum enrobed in facile, dial-1-800, Marianne Williamson-style spirituality.

People everywhere yearn for connection to something bigger than themselves: It's a human and universal drive that, ideally, shouldn't be slimed up by the snake oil of crummy movies. Too bad that doesn't stop Tom Shadyac's tear-jerky, love-beyond-the-grave thriller "Dragonfly" from passing the collection plate at the Church of the Holy Load.

Whether you like "The Sixth Sense" or not (and for the record, I don't), it's easy to understand why audiences found its surprise ending effective. But "The Sixth Sense" presented itself as something more than a clever thriller: It purported to grapple with larger spiritual issues surrounding life and death, mixing up New Age burblings with campfire ghosties to make audiences think it was deeper and richer than it actually was.

"Dragonfly" wants desperately to be the spiritual heir to "The Sixth Sense," but it's not even as effective a thriller. By the time Kevin Costner has finally paddled his way to the carefully calibrated, tearfully joyous (or is it joyously tearful?) conclusion, a passel of astute viewers will already be there waiting for him, cleaning out their fingernails and yawning. At the very least, spiritual enlightenment should never be this boring.

The key to "Dragonfly" is -- I kid you not -- a tiny cluster of freckles in the shape of a dragonfly, a small wonder of a natural phenomenon situated on a woman's upper back, so when the camera lingers on this detail for, oh, some 30 seconds, be sure to pay attention. The woman with the special freckles is a beautiful and altruistic doctor named Emily (Susanna Thompson), beloved wife of Costner's character, Joe, also a doctor. As the movie begins, we learn that Emily was recently killed in an accident in Venezuela, where she had been working for the Red Cross. (We see the dragonfly mark in an early flashback.)

Joe's grief devastates him and causes problems at the hospital where he works. It also causes friends and acquaintances, among them Kathy Bates in one of those salt-of-the-earth next-door-neighbor roles, to spout textbook grief-therapy-speak at him. Costner, who mostly somnambulates through the movie (he plays grief as if he's perennially forgotten where he put his car keys), has his greatest moment when he confronts a grief counselor who tries to psychoanalyze him at a dinner party. When she tells him, as she sanctimoniously glows from within, that he must eventually face up to his guilt and anger issues, he snaps back that he damn well knows it: "I don't need you to crawl up my asshole with a flashlight to tell me about it."

At no moment in "Dragonfly" is Costner more likable, in a snaggle-tooth kind of way, or more sympathetic. (If you've ever lost someone and found yourself at the hands of a well-meaning psychobabbler bound and determined to diminish your grief no matter what, you'll identify with Costner's miniblowup.) But mostly Costner's Joe just busies himself with unraveling the mysteries at hand: Is his dead wife trying to reach him, speaking mostly through the voices of the cancer-stricken children she had been treating before her death? (What's more, those moppets keep presenting Joe with mysterious drawings of the same squiggly-cross doohickey, which sends him scrambling for his "Penguin Dictionary of Symbols.") Does it mean anything when the dragonfly paperweight he'd given Emily flies off the table, seemingly of its own accord? And is it possible, even against all odds, that his wife is still alive?

These are the questions Costner must answer, as his friends and neighbors become convinced he's crazy and we merely become hypnotized with boredom. Director Tom Shadyac ("Patch Adams"), working from a script by David Seltzer (from Brandon Camp and Mike Thompson's story), layers the movie with lots of mystical-spooky touches that don't really need to be there. In fact, they raise more questions than they answer: If Emily is a benevolent spirit who's simply trying to get her husband's attention, why does she seemingly cause her cranky, beloved pet parrot to suffer a seizure?

Forget the way the movie tries to wrap us in a dreamy cocoon of wishful thinking, in the idea that -- thanks to mysterious forces we can't understand -- it is possible to reconnect with our deceased loved ones. If the sight of that comatose bird lying on the floor, its toes curled in terror, isn't enough to make you dial Father Damien pronto, I don't know what is.

"Dragonfly" doesn't know if it wants to be spooky or spiritual, and it ends up being not enough of either, but not for lack of trying. That's why we get Linda Hunt as a nun specializing in near-death experiences. When Joe seeks her guidance, she twinkles beatifically while dispatching words of wisdom: "It's belief that gets us there."

It's belief that finally gets us to the end of "Dragonfly" -- it seems like a small miracle that this thing actually ends. What doesn't go away is the nagging sense that Shadyac and his team really do believe that "Dragonfly" is a meaningful movie about grief and our need to have faith in the grand and mysterious workings of the universe.

But it's another matter entirely when you use faith as a handy catch-all for things you don't want to bother explaining in your movie. Worse yet, there's something distasteful about the way "Dragonfly," like those dishonest mediums who took advantage of grieving loved ones during the spiritualist craze of the early 20th century, suggests that there's always hope to open that channel between the dead and the living, if only we'll give ourselves over to powers greater than ourselves.

"Dragonfly" flutters around helplessly in a New Agey haze. While it's true that logic will take you only so far in life -- at one time or another, we all face situations that demand a leap of faith -- there's also something to be said for taking full advantage of those most blessed gifts, common sense and intellect. There are deeply religious and spiritual people in this world who would argue that entering a church, synagogue or temple doesn't mean you have to check your brain at the door. The same should go for movie theaters.