A Pig and a Monkey make crazy love

She can't help lovin' that man, he can't help being so damn shiftless and sexy. What's to become of these two? 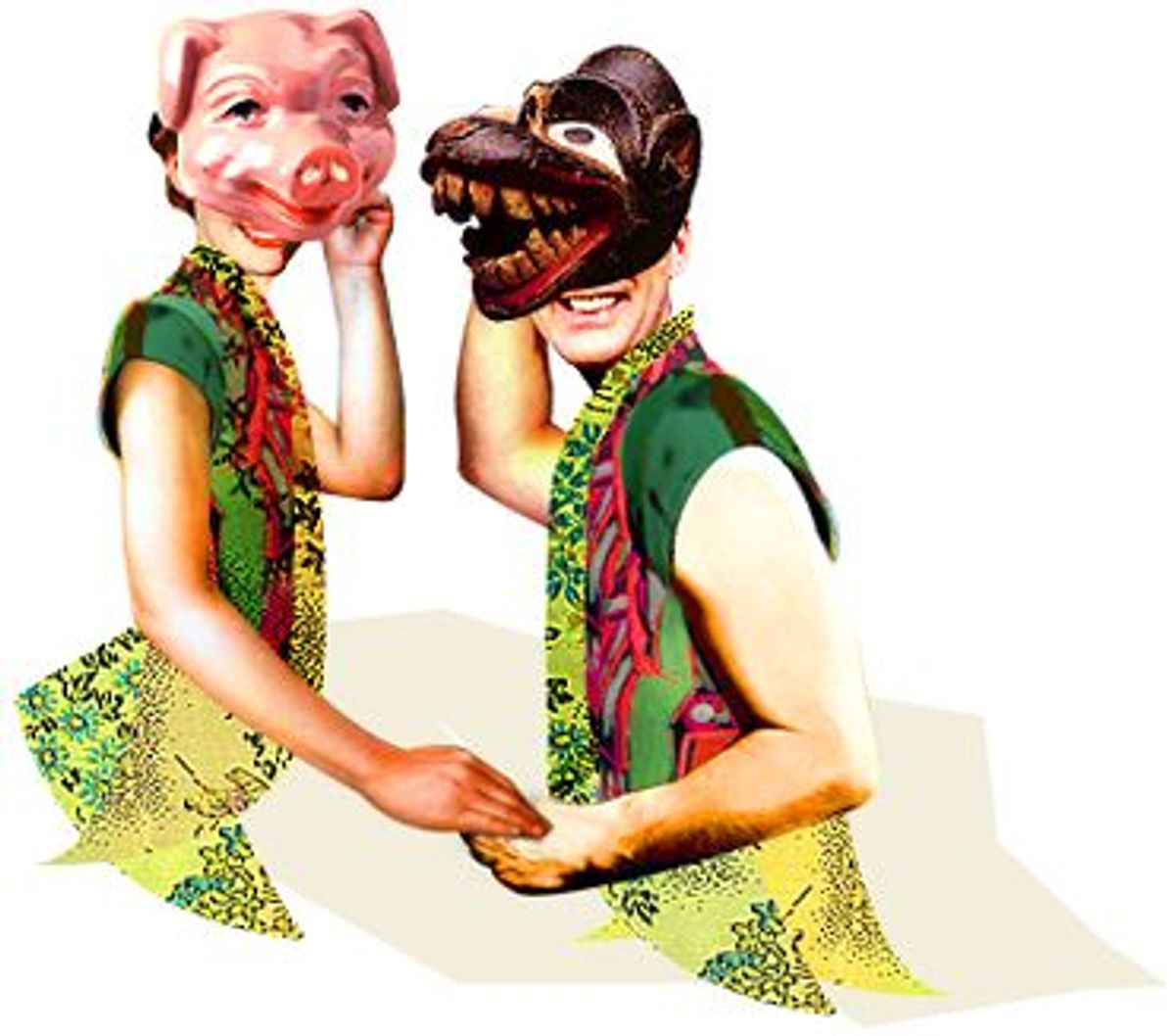 So you have a crazy love, and somehow it lasts. Year after year, the two of you roll around like pouncing kittens, see the sun rise and set in each other's eyes, and skip love-drunk through life, stopping to smell the flowers in every garden and to sip a drink from every lemonade stand. So what if you still live in the spare room at your parents' house? Who wants a mortgage! Who cares if you share a thin futon instead of a king-sized Serta? Togetherness is what you crave. The two of you survive on peanut butter and cabbage sandwiches because you're too besotted to remember to go to the grocery store. Why does it matter that he doesn't have a job? The way he says "chair" turns you on. And the way you hold a pencil makes him helpless with desire. Is this a problem? Or is this what we're all looking for?

This week, Frieda writes in to admit her fears that she and her husband, David, live in a fantasy world that reality will spoil one day. Frieda grew up a sheltered rich kid, and now she runs a restaurant with her parents, whom she leans on for emotional and financial support. She relies on David for love and for "the whoops of chimps at play." Will that be enough to sustain their marriage when her parents are gone? And will she and David ever have kids and careers of their own (and maybe a bigger place)? "Please tell me why that darn son-of-a-gun husband of mine has wheedled himself so deep into me?" Frieda writes. "He drinks too much, is ridiculously sexy and handsome, snores, has less ambition than a rock, makes me laugh more than anyone I've ever known, and after being together for more than ten-and-a-half years, he still manages to explode my soul with color and light when he simply stares at me and smiles." Should Frieda call a shrink? Or should she call Miramax?

All four of Frieda and David's signs conspire to bring them together like Bonnie and Clyde, Pebbles and Bam-Bam, a con man and his shell game. The Aries Gemini relationship (when it works, as this one clearly does) has no brakes. Aries is an eternal optimist, hugely energetic and desirous of hero-worshipping people (remember: optimists get disappointed more easily than pessimists). Aries often depend on their parents one way or another throughout their lives (even when they're not hitched to a mad Gemini). Meanwhile, Gemini always wants to be unhindered; to be given free rein to be as creative and spirited as possible. Geminis don't like to think they're making a single compromise. When an Aries believes in her Gemini, she's incapable of saying "Whoa!" She will defend him to the last, however harebrained his schemes may be. She will believe in him, in herself, and in the two of them against the world. When she's lucky, it turns out her Gemini was a genius, and her faith pays off.

David is born in the Gemini Monkey constellation -- an especially charmed and brilliant combination -- so maybe this Aries won't be let down. Both signs are utterly withered by criticism (well, Aries is withered, Gemini is enraged); they will instinctively protect each other from any intimations of failure (which explains the unreality aspect that dances around this pairing). They make excellent allies; watch out if an Aries-Gemini pair starts sweet-talking you; they will come away with the candy, whether or not you meant to give it to them.

As a Metal Pig, born in the Sheep hour, Frieda is sensual, loyal, headstrong, jealous, gullible and somewhat of a hedonist. Pig and Aries are both home-loving creatures; Frieda will need to have a comfortable home, and she's right to worry that without her parents providing an Eden of security, she would become unhappy. She might consider asking them to give her a down payment to get a house for her and David now (it might be wise to get the house in her name). If she feels strongly about having a child, she should push the point with David; Monkeys often resist or delay childbearing.

An Earth Monkey is the most thoughtful of the Monkey signs; they're still scheming and clever and funny, but they're also introspective, generous, and comparatively high-minded. There's an unusual twist in the Chinese relationship between Pig and Monkey -- they can have a good accord, yet the Monkey often manipulates the Pig. But David's Earth Monkey year birth makes him more likely to be aboveboard. His Horse hour birth (if indeed he was born between 11 a.m. and 1 p.m.) can make him temperamental, but he will be well-meaning, and the Gemini-Monkey-Horse meld will make him unusually lively and appealing.

It's a mischievous but powerful sign combination that draws Frieda and David together. The only thing that worries me in Frieda's letter is David's drinking; she treats it lightly, but a bad drinking habit can scupper even a Gemini Monkey's chances at happiness -- and David won't be able to take good care of the two of them if he can't learn to subdue this appetite. This matters particularly because, despite appearances, Frieda, with her Aries-Pig born entitledness, is the one in the couple who will really need "long-term care"; David needs allegiance, appreciation and nurturing but he's not as soul-searching as she is.

Frieda will need a nice home, day-to-day fulfillment and emotional feedback. (Pigs are popular, but don't go out of their way to make friends; Frieda would be helped by trying to extend her circle of friends.) As far as the home goes, David may surprise her; Monkeys are usually very clever at coping financially. If David has not done so for the two of them now, this may be because Frieda and her parents have made it unnecessary for him to exert himself. A monkey can whoop like a chimp at play, but he also knows how to dip the honeyed grass blades into the anthill when he has to. But why eat ants when passion fruit and bananas are dangling before you?

If David and Frieda are still exploding each other's souls ten years on, it sounds like they have come as close to conjugal happiness as two married people can, so maybe it doesn't pay to borrow tomorrow's trouble. And if trouble comes -- well, that's so unromantic, why worry? It doesn't take away the ten years. Besides, if Frieda's parents are as well-heeled as her letter implies, she's got a safety net that can tide her through any number of future difficulties. As Hall and Oates would say, "You know it don't matter anyway."