"Queen of the Damned"

The late R&B star Aaliyah haunts an Anne Rice adaptation that feels like a vampire's life: It goes on forever. 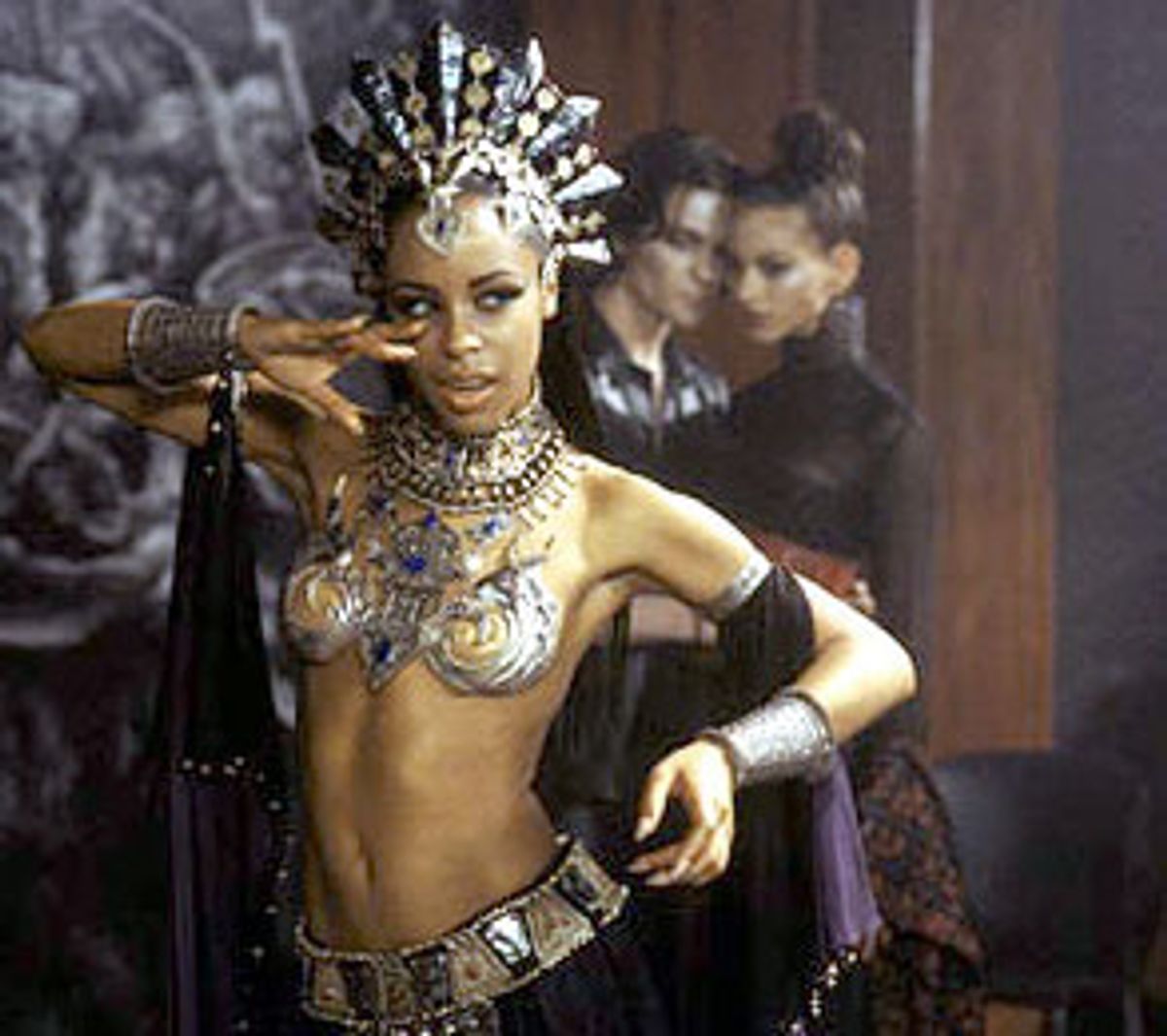 "Queen of the Damned" feels like a vampire's life: endless. I suppose it captures the spirit of Anne Rice's bestselling vampire chronicles, at least in that sense. Just as the author's characters suffer through their immortality, as they crave closure and a death to their blood-sucking madness, so "Queen of the Damned" demands an end to its own misery.

Virgin vampire fans will be confused by the cliché-addled dialogue, clumsy directing and eardrum-bursting sound effects, while those who have come to love Rice's dark, tragic novels will wonder what they've wandered into. The movie is not a complete failure; arresting scenes with Aaliyah -- the beloved 22-year-old pop star who died last summer while playing the film's queen -- stanch the pain, as do a handful of impressive sets. But "Queen of the Damned" ultimately belongs in video-store hell, far away from better genre movies such as "Cronos" or "The Crow" and somewhere near Rice's last filmed failure, Neil Jordan's version of "Interview With the Vampire."

This film's largest problem lies in director Michael Rymer's inability to create a clear story line. It's true that Rymer, critically acclaimed in his native Australia, faced a difficult task. Rice's novel, at 491 pages, is filled with long-winded back story about the world's first vampires and a globetrotting tendency that doesn't lend itself to dramatic adaptation. But sheer mass is no excuse for the incoherent mess Rymer has created. His final distillation, with the assistance of writers Scott Abbott and Michael Petroni, answers questions that were better left to the book and ignores those that might have given the movie more depth.

"Queen of the Damned" tries to focus on the vampire Lestat, who awakens at the start of the movie to become a rock star. It makes him the hub around which other characters spin, and the able Stuart Townsend nearly has enough stage presence to keep the cast close. With his dark eyes, dark hair and Aussie-tinged French accent, his Lestat is far more believable than Tom Cruise's version in the Jordan film.

But Lestat has too many people to keep track of. Before the evil Queen Akasha appears halfway through the movie -- at a coven bar where Aaliyah gets the chance to writhe on the dance floor -- the audience is introduced to a score of characters and subplots. There's Lestat and his band who appear at a press conference, and then a flashback to Lestat and Marius (Vincent Perez), the ancient vampire who gave Lestat "the Dark Gift." Rymer also introduces the queen early on, in a form of marble-encased hibernation, and Jesse (Marguerite Moreau), a student of the paranormal who meets Lestat outside a vampire bar. Oh yeah, and Jesse also has both a scholarly mentor and a benign vampire aunt (the talented Lena Olin from "Chocolat") who rivals the queen in strength, knows Lestat and appears to Jesse regularly in dreams, always telling her to go live "with her own kind."

Few of these relationships, particularly those between mortals and immortals, are ever sufficiently clarified. Lestat learns with Marius that he must never consort with humans unless he plans to kill them, for example, but while he longs to bite into Jesse (who offers her breast the way a wedding waitress offers hors d'oeuvres) he doesn't seem to crave the blood of his band-mates or his manager. The fact that they and so many other human characters know but don't care about Lestat's hunger for groupie blood also undermines another primary theme: the idea that humans hate and fear vampires.

Audiences are supposed to believe that covens of the undead want to kill Lestat for revealing their secrets through his songs, giving humans the chance to hunt and kill them all. But the vampires' fear of mankind is clearly unjustified. Most of the movie's mortals treat vampires like superheroes rather than ruthless killers. Victims never notice their killers' fangs and die without complaint from their families or the public. Even those who believe what Lestat sings about -- including a vapid press corps that is used mostly to explicate upcoming plot twists -- seek not to destroy vampirism, but rather to study it.

Of course, Rice also glosses over the mutual fascination between mortals and immortals in her book. But by focusing almost exclusively on the vampires and their thoughts, she gives her characters emotional complexity and manages to create a mood that allows for such oversights. Not so for Rymer. His visual effects -- mostly vampires flying in their capes or bursting into flame -- are predictable. The movie's dialogue seems to be torn from a comic book. Lines like "Come out, come out, wherever you are" (Lestat, whispering to the vampires who want to kill him), should have been rewritten or killed.

The sound, turned up beyond 11 to somewhere near unlucky 13, doesn't help. Some of the soundtrack's industrial music suggests the sweaty power of Nine Inch Nails but the volume, at least at the screening I attended, bordered on deafening. Worse, the songs never get a chance to stand alone or stand out. Every action comes complete with an overly dramatized sound effect, whether it's Queen Akasha stopping attackers with a thrust of her hand or Lestat turning his head and baring his fangs.

Townsend's performance and the cold, crisp sets of Lestat's Los Angeles home (designed by Michael Bell and Fiona Donovan) are lost in the shuffle. The movie's flaws also undermine Aaliyah's at least halfway impressive achievement in playing Akasha, who contrasts sharply with the sweetness the young star revealed in "Romeo Must Die." Good acting -- and both Townsend and Aaliyah are just good, not great -- rarely overcomes miserable writing and "Queen of the Damned" is no exception.

The pop star's fans won't likely be scared away by the movie's failures, nor will those who live vicariously through Rice's fictional world. But both these pop-culture luminaries, one dead, one alive, deserve better. To truly appreciate their art, experience them in their original medium. This film does not become them.