This time, it's personal

California's Republicans might win with a moderate like former L.A. Mayor Richard Riordan -- but only if they can put their fratricidal inheritance behind them. 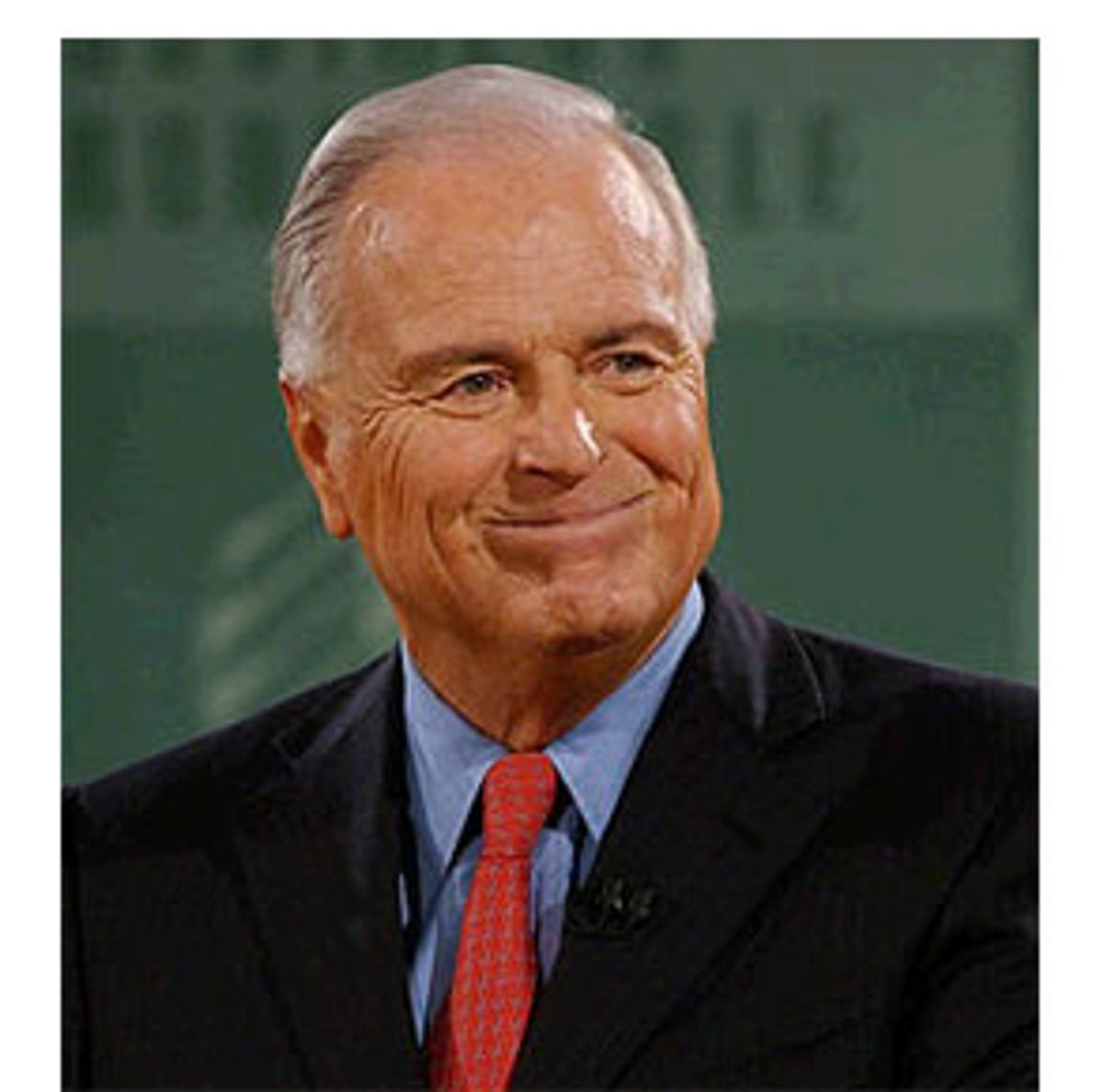 Movie stars and moonbeams, mayors and millionaires have all sought to become governor of California. But even for California, this year's governor's race is turning into a strange one.

The current front-runner, former Los Angeles Mayor Richard Riordan, once said, "My worst nightmare in the world is waking up in the morning and realizing I'm governor of the state of California." His chief opponent for the Republican nomination, political novice Bill Simon, only entered the race after Riordan -- not yet a candidate himself -- talked him into running. Former California Republican Gov. George Deukmejian has said he would not endorse Riordan even if he wins the party's nomination -- which probably has something to do with the fact that Riordan gave half a million dollars to Democrat Tom Bradley in Bradley's 1986 run against Deukmejian for governor.

There are other intriguing subplots involving former President Richard Nixon, a bankrupt savings and loan, Sen. John McCain, R-Ariz., the Bush White House and actor Don Knotts, but we'll get to those in a minute.

In some respects, the race for the Republican nomination is simply the latest chapter in a long-running fight between conservatives and moderates. Since the party's implosion in 1998, these battles have been very public and very ugly. Republican strategist Dan Schnur once quipped the party was like a "circular firing squad," unable to sidestep divisive fights over issues like abortion and immigration, relegating itself to obscurity in the process.

While the Republican primary is being dubbed by some as a long-overdue showdown between moderates and conservatives, among party insiders it's also very personal. Deukmejian has clearly not forgotten Riordan's support of Bradley during in the 1980s, and Riordan has done little to try to salve the wounds.

Though the former L.A. mayor is a regular at a monthly comedy confab in a Los Angeles deli, which features the likes of Jonathan Winters, Buddy Hackett and Don Knotts, Riordan didn't help matters when he joked at this month's state GOP convention, "George has a bad memory. The only thing he remembers are his grudges."

The Republican audience responded with a chorus of boos.

The Bush clan is also looking for a little payback on March 5, when state Republicans will choose among Riordan, Simon and Calif. Secretary of State Bill Jones. As much as the Bushies would love to see a moderate Republican in the governor's chair in Sacramento, this primary provides the added allure of removing Bill Jones from the state picture. Jones, the only Republican to hold statewide office in California (term limits mean he cannot run again for his current post), made national headlines after the New Hampshire primary, when he switched his endorsement from Bush to John McCain.

Though the Bushies have a famously long memory, Jones' team seems to have already forgotten the past. In a recent hit against Simon, Jones campaign manager Rob Lapsley pointed out, "Bill Simon never voted for a Republican president of the United States in a primary, including George Bush." Presumably Jones' endorsement of McCain means Jones didn't cast a primary vote for Bush either -- but that, apparently, is beside the point.

Though it officially remains neutral, the White House is all but publicly pulling for Riordan. Last June, the president called Riordan to urge him to enter the race. And Riordan communications director Margita Thompson, who worked for Bush in California, came to the Riordan campaign with the White House's blessing, straight from her old job as Lynne Cheney's press secretary.

There is also some history between the Bush forces and Simon. Simon's father, the late William Simon, was Richard Nixon's treasury secretary. Throughout the 1980s, Simon and a young hotshot from the Nixon White House began a partnership, buying up several small, ailing savings and loans in an effort to create a giant merchant bank. Simon and his partner made millions off the banks but eventually parted ways in an acrimonious split.

Simon's partner was Jerry Parsky, a Bush confidant who ran Bush's presidential campaign in the state and is today the White House's de facto point man in California.

Before the split, Parsky had described Simon as his mentor; Simon had returned the compliment, calling Parsky his best friend. But in 1991, Simon sent his partner a fax informing him their partnership was over. A big reason for the split, reportedly, was that the elder Simon wanted to make room for his two sons -- one of whom is now running against the candidate Parsky unofficially supports.

That history resurfaced in a new attack ad unveiled by Riordan's team this week. In their effort to introduce Bill Simon to California voters, the Riordan spot says "mismanagement was cited in collapse of savings and loan, resulting in $92 million taxpayer funded bailout" of Western Federal, a savings and loan that was purchased by his father and Parsky. The Simons lost an estimated $40 million on the collapse of Los Angeles-based Western Federal -- which took place after Parsky was gone from the partnership.

The new Riordan spot shows his campaign is concerned about Simon's surge. A new poll from the Public Policy Institute of California shows Simon on the rise. In January, Riordan held a 37-point lead over Simon; in the poll released Thursday, Riordan's lead had shrunk to 17 points. Some private polls show Simon within single digits of Riordan.

Catching Riordan by primary day on March 5 will be an uphill climb for Simon, but Riordan's about-face on negative advertising could backfire. As Bush once so eloquently stated during the presidential campaign, "you can't get on your high horse and take the low road." That's just what Simon's campaign is accusing Riordan of doing with his latest spot.

"It's really pathetic that Dick Riordan cannot articulate a single policy position in an entire six months of campaigning but can ... create negative advertising," said Simon political consultant Sal Russo in an interview with the Sacramento Bee. "He's more like Gray Davis than anybody imagined."

None of this, of course, bodes well for the California Republican Party. Davis' advisors have not been shy about expressing their joy as Republicans once again beat each other up.

"I hope they kill each other," Davis campaign manager Garry South said recently.

That's just what they've been doing for the last six years. The party machinery in California is largely controlled by conservative activists; they help nominate conservative candidates who are unelectable statewide. The fights have badly damaged the party. All but one of the state officers, along with the two U.S. senators, are Democrats, and Democrats enjoy near veto-proof majorities in both the state senate and assembly.

The Bush administration has worked hard to change that. During the 2000 campaign, Bush largely circumvented the state party establishment. Though conservative Shawn Steele is still the party chairman, much of his power has been stripped. Parsky now leads the effort to reform the state party. When he's not chaperoning Vice President Dick Cheney across the state, Parsky's charge is to help Bush do in California what he tried to do nationwide in 2000 -- put a kinder, gentler face on the Republican Party. But in California, it just might take a little longer.

Conservatives have shown some willingness to support a more moderate, electable candidate, but Riordan is certainly testing their ability to grin and bear it. Though he differs with his party's conservatives on issues like gay rights and abortion, it's Riordan's political donations and endorsements that have most rankled the GOP troops.

The Riordan camp called the remarks "unbelievable. These are the subtle signals that some men in our party send out that turn people off to the Republican Party in California," Thompson said.

Indeed, Democrats have been able to capitalize on the slew of pro-life Republicans who have headed recent Republican tickets in California. The last Republican to win at the top of the ticket was a pro-choice candidate, Pete Wilson. Davis' last opponent, Dan Lungren, was tarred with the pro-life label; Davis painted Lungren as an arch-conservative who was out of touch with most Californians, and won by 1.4 million votes.

Many Riordan supporters say their candidate is the party's only hope. Burned by the last six years at the polls, many conservatives have lined up behind Riordan, not because they agree with him, but because they think he's electable.

Certainly Gov. Gray Davis thinks so. Davis is so concerned about a possible Riordan candidacy (polls show Riordan with a slight lead over Davis in a head-to-head matchup) that the governor has already started airing television ads attacking Riordan's record, on everything from abortion to energy.

In another one of the campaign's strange twists, Davis is getting an assist from the conservative Deukmejian. The cash-strapped Jones, who is supported by Deukmejian but is still a distant third in the polls, aired a new spot featuring Deukmejian declaring that "Riordan is a man I couldn't vote for." While Jones lacks the funds to bring his message to the people, Davis is helping to spread the gospel. A new Davis ad notes, "Former Gov. George Deukmejian says Riordan tries to be all things to all people and questions his commitment to principles."

Jones' campaign is hurting for cash, and spent less than $100,000 on the Deukmejian ad buy. The cash-flush Davis spent more than $1.5 million on his new ad. "Bill Jones said he was going to have money, but he didn't say he was going to use Gray Davis' money," quipped Thompson.