The director of the Child Witness to Violence Project argues that President Bush isn't doing enough for kids who see too much. 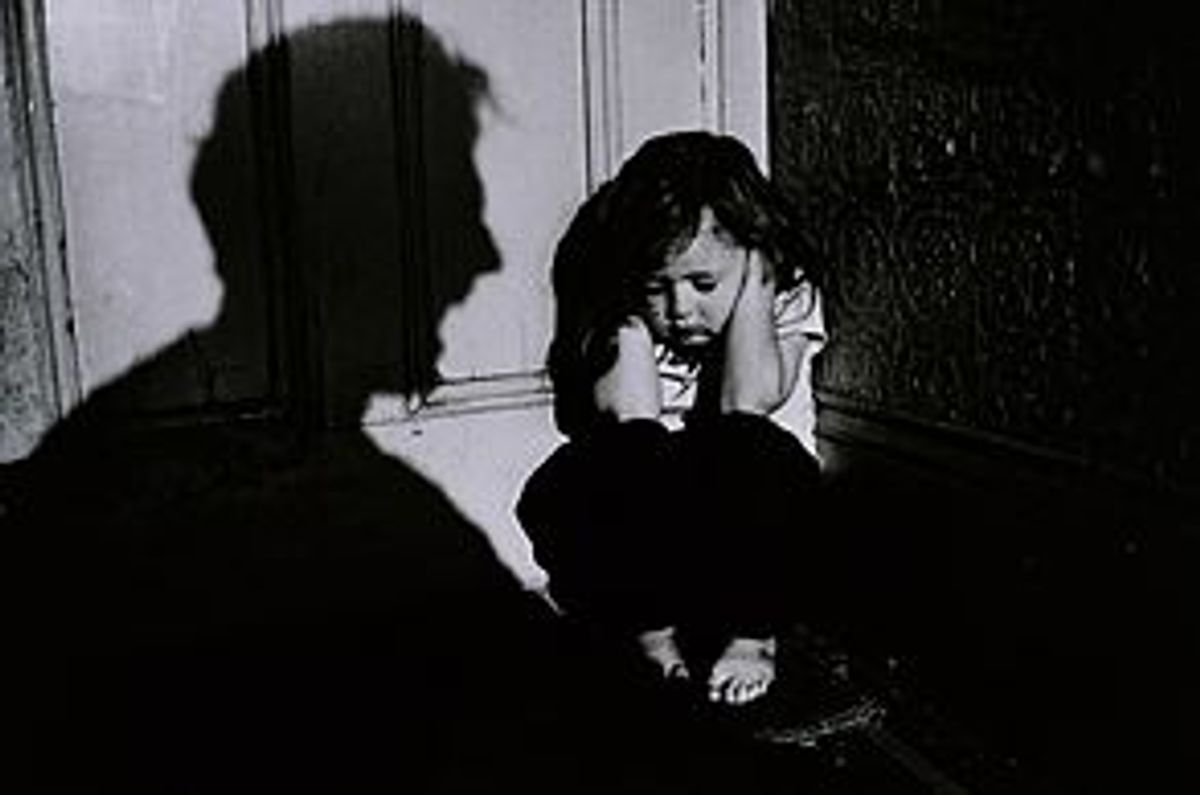 In the last decade, Betsy McAlister Groves, director of the Boston Medical Center's Child Witness to Violence Project, has seen the worst of what the world does to children. She's met with kids whose parents assault each other; children who have witnessed murders, rapes and suicides; children who live amid gang warfare or with an abusive parent. Over 250 traumatized children receive therapy and assistance through her program every year.

Groves' new book, "Children Who See Too Much," is a survey of the impact violence is having on America's children -- whether domestic violence, the most pernicious problem (a shocking 85 percent of her program's referrals); community violence; or simply the death and destruction that we all see in the media every day. If children who witness violence don't get help from nurturing adults, she contends, they grow up to be pessimistic, alienated and aggressive adults.

In the days after Sept. 11, when millions of children witnessed the World Trade Center attacks -- up close and in person, or simply live on television -- it was a particularly good time to discuss the impact of violence on future generations. Are we stuck in a vicious cycle of ever-escalating aggression? Groves attests it is possible to break the cycle, but she worries about the Bush administration's commitment to assisting affected families and communities.

You wrote your book before Sept. 11. What kinds of fallout for families with children have you personally observed from that event?

We were overwhelmed with requests from parents, groups and agencies for the first two months, until Thanksgiving. [We were] helping parents try to think about how to talk to kids, and how to allay kids' fears about their own safety and the safety of their parents. Young children didn't feel safe, and didn't want their parents to go to work, didn't want to fly. Kids were very confused about anthrax and had great misunderstandings about how one could contract anthrax poisoning -- kids thought you couldn't touch any mail. Kids whose fathers were letter carriers were terrified by this stuff.

There's also the issue of how to talk to kids about war. It's a question of safety; but there's also the moral and philosophical and political dilemmas that parents face. There are notions we want to teach kids about getting along with their peers -- telling a 4-year-old that hitting isn't the way to solve the problem and you don't just "get back" at somebody -- and you have to square that with a national retribution that is overkill in many ways.

But my sense is that those specific fears -- the anthrax, the flying -- have waned, and we aren't hearing a lot anymore. That's consistent with what we have learned about reactions to traumatic stress: There's a normal reaction to horribly abnormal events, and then that decreases after a while. Certainly in our eyes, this is decreasing a bit.

In your book you discuss the idea of pervasive pessimism -- a "sense of foreshortened future" -- that is evident in children who witness violence. Do you think this applies to this generation of kids who have grown up with violence all around them?

When I talk about the notion of pervasive pessimism, I am talking about a smaller subgroup of children who have witnessed or experienced traumatic violence -- I mean real-life violence, not images on TV or even seeing the World Trade Center collapse. It's very important to make that distinction between what it does to have physical proximity to real-life violence, as opposed to seeing it on TV.

Different generations of us have grown up with some kinds of diffused fears or worries -- for my generation, we grew up with the threat of atomic war, and the age of fallout shelters. Think about that for a minute: That can do a number on kids. I had a teacher in school who was convinced that we all needed fallout shelters -- and that was sixth grade. So there are precedents across the generations.

What is the long-term impact if a child witnesses a violent event? Say, seeing a murder, or observing his mother being beaten by his father.

If a child witnesses traumatic violence, is it permanent and how does it play out over time? There haven't been studies that have shown that, but my sense is that it is highly contingent on the child first being in a stable and secure environment, and getting some helpful intervention. There are ways that we can help kids, if not avoid it, at least manage it. I don't want people to feel like this is hopeless -- that these kids are scarred for life. It's the kids who don't get help that we have to worry about.

Are the kids who have to deal with violence able to get help? You write that [the Bush] administration has shown a "stark unwillingness to invest in the kinds of support that will reduce poverty, support children's emotional and intellectual development, and make the world safer for kids."

I continue to have concerns about the current administration's focus on poverty -- I would point to the tax relief, the tax bills that generally favor either wealthy persons or corporations. There is a continued reluctance to take up the issue of health insurance for all the many, many uninsured families in this country. These are two topics which concern me a lot.

I worry that the emphasis on defense spending may come at the cost of support to vulnerable families in this country. In Massachusetts, we are already seeing drastic cuts in human services as it relates to the economic downturn.

What kind of impacts will these cuts have?

Families are attempting to raise kids under what could be increasingly stressful conditions -- lack of money, lack of jobs, lack of resources. We know that those kinds of stresses are associated with both family violence and community violence. So you have more kids that are growing up in climates of high stress and increased violence, and this is a breeding ground for all kinds of bad outcomes -- one of which is children's increased involvement in delinquency, gangs and antisocial or illegal activity of all sorts. We see increased substance abuse.

We end up paying at that end, and we're paying dearly -- in prison costs, court costs, substance abuse treatment, increased child abuse costs. Prevention is cheaper than the cost of years of neglect. And it's that essential failure that is most troubling -- I do think that this country is continually unwilling to invest in families upfront.

There is something about the chronic living with terror, living with a parent who is abusive to another parent, that wears and tears at children's psyche maybe in a different way than child abuse. It emphasizes how much domestic violence erodes children's functioning.

The child can't turn to either parent for comfort -- one is a victim, the other is an abuser?

Right, the adults are not emotionally present to their child, and that's the jeopardy of domestic violence. It's unlike other forms of violence, where parents can heroically help their children -- even looking back at 9/11, so many parents struggled with 'How to talk to my kids? How much TV to let them see?' If you're a traumatized victim, you can't think like that.

You write that traumatic events initiated by humans carry more psychological risks than natural disasters -- why is this?

I think that the knowledge that human beings can wreak such violence or destruction on other human beings is more overwhelming for children than a hurricane or some less irrational act. The fact that it is of a human hand. Children understand "evil" -- seeing the dark side of what humans can do to one another. It's really hard for kids to take in or comprehend, and it's very overwhelming.

You write that "There is no such thing as a day in the life of America without violence." And yet so many people feel like they should shield children from violence. But should we try to whitewash how terrible things really are?

When children are young, you protect them from that. Children's ability to cope with the realities of violence, or any number of stressors, is rooted in a solid foundation of trust and stability. To expose a 3-year-old to the truths in the world -- that there is violence out there -- is going to damage that basic foundation of safety and ability to trust in adults. It's overwhelming and kids don't have the cognitive structure to put it in perspective. Telling a 3-year-old about the grim realities of 9/11 is only going to be overwhelming. It's not going to help in the long run.

But as kids grow up you don't want to continue to shield them, because then the subtle message is that the child can't handle it and it's too scary and overwhelming for them.

How would you reform the media if you could?

I wish that TV news programming would take stock of the way they essentially manipulate stories of violence and mayhem by making them lead stories, giving them lots of airtime. Kids take away from this a skewed sense of the dangerousness of the world: If this is what they see as the lead story, that's how they think the world works. And it doesn't.

We also need to help parents have more control over what children are seeing, though it's easy to say and is a very complex set of ideas to embark upon. Because of the instant media, parents have been increasingly robbed of their abilities to mediate the outside world to their children. Parents feel helpless about that.

We all are desensitized to the barrage of violence. Here's an example of the cultural shift of what's on TV, what kids see, and how difficult it is for parents to protect children. I was watching "West Side Story" with my own kids a few years ago, and there's the gang scene in which Tony gets killed; it is so stylized, done through choreography, that you don't see any direct aggression. It gives kids the idea, you know what's happening; but they are spared the more brutal and violent images. That's such a difference: If this was made in 2000, we would have seen a bloody gangbang.

What actions can adults take?

One of essences of all this is the power that adults have to be role models or shape behavior in children. I think that adults need to really set the example for being civil and humane and caring. You have the hockey dad, but I'm also just as concerned about public leaders who berate or humiliate or behave publicly in ways that are aggressive and hurtful. All of this has an impact. My hope is that we take stock of ourselves as adults and think about how we can create more safety and nurturing for children.