Osama bin Laden is still at large and Afghanistan is a mess -- so why is the president in a hurry to take his anti-terror campaign elsewhere? 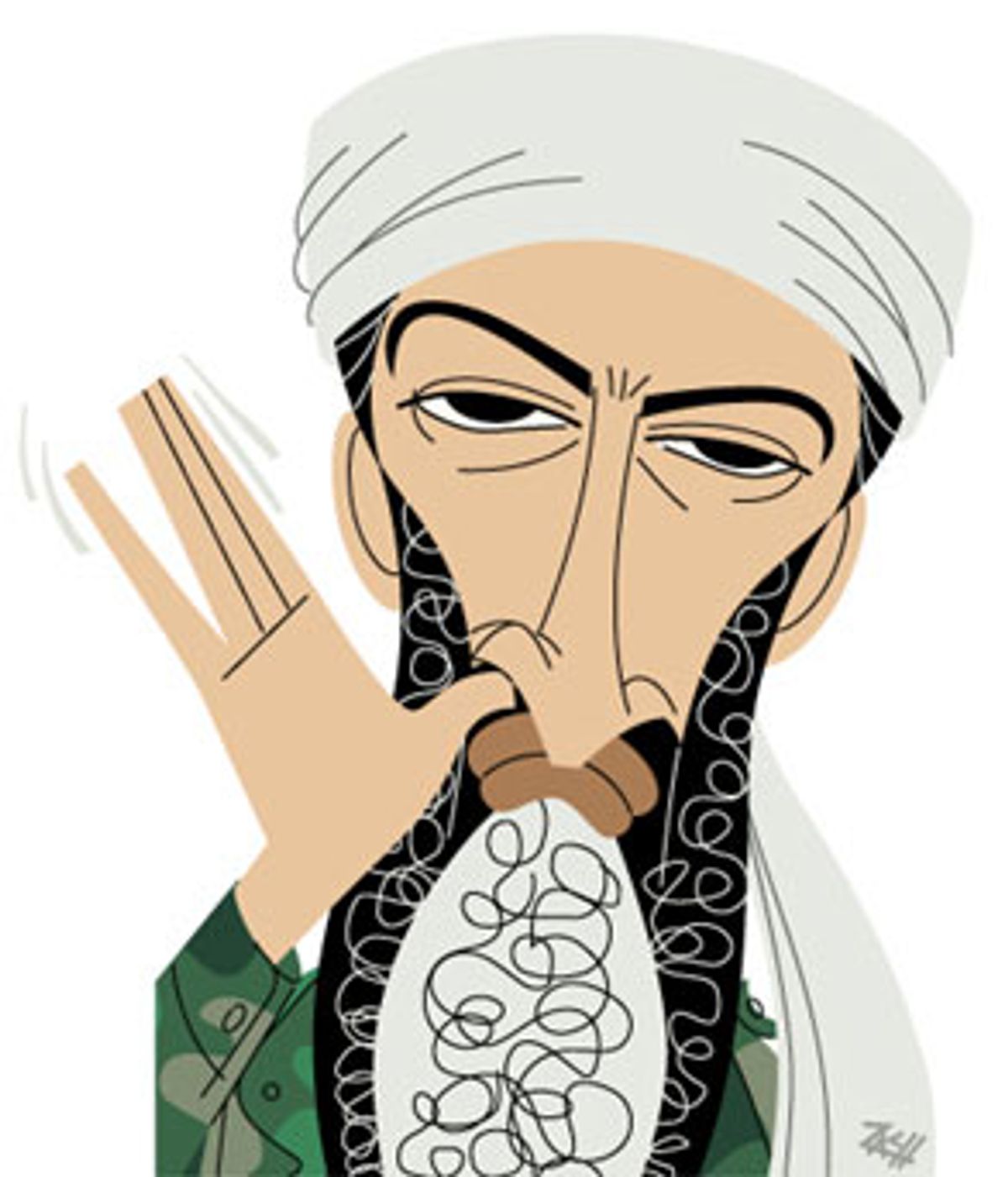 The Bush cheering squad that is still applauding his prosecution of the war in Afghanistan should hold off on the victory parades. Recent news reports are now confirming that Osama bin Laden (remember him, the demonic mastermind behind Sept. 11 whom the president once labeled his No. 1 target?) and most of his top lieutenants are alive and well, as is the Taliban's one-eyed despot, Mullah Omar, and his top deputy. While the president searches for evildoers in other far-flung corners of the globe, the man responsible for more American deaths than anyone in Baghdad, Tehran or Pyongyang is merrily sending out e-mails to friends and supporters, including heartfelt condolences to the family of a deceased Afghan cleric. As the administration was forced to acknowledge last week, only one senior al-Qaida official has been killed or captured -- Muhammad Atef, the terror network's top military strategist. And the FBI has not even removed his name from its list of most wanted terrorists because his death remains unconfirmed.

Apparently frustrated by its inability to track down the terrorist leaders, the Bush team has begun to downplay their significance. The president once told the world that he wanted bin Laden "dead or alive." But nowadays he never even mentions the holy warrior with a lust for American blood -- and Defense Secretary Donald Rumsfeld has begun telling the press that bin Laden and his loathsome circle are not that important in the overall scheme of America's anti-terror war. Try selling that one to New York City firefighters -- or the rest of the American public, for that matter.

At least Gen. Tommy Franks, the commander of the Afghanistan campaign, had the decency to concede his mission remains glaringly incomplete. Testifying before the Senate Armed Services Committee earlier this month, Franks nodded in agreement when Sen. Jim Bunning bluntly told him, "I'm not pleased, and I don't think any Americans are pleased that we haven't done a better job on al-Qaida." The Pentagon strategy of relying on Afghan warlords and heavy American bombing to secure the Tora Bora region where al-Qaida leaders were holed up, now seems an undeniable blunder. It might have minimized American casualties -- more journalists than GIs have died as a result of enemy fire -- but it failed to stop bin Laden and his band from melting away, probably across the poorly guarded Pakistan border. One military analyst quoted in last week's Boston Globe called the bombing-centered strategy "shooting a hornet's nest with a shotgun."

Without the head of bin Laden (and of key deputies like the doctor of death, Egyptian surgeon Ayman al-Zawahiri), the Bush war in Afghanistan is looking more and more like Gulf War II, a replay of his father's half-victory against Saddam Hussein, which left the dangerous dictator in power. The analogy is not exact: Bin Laden does not rule a country, and his terror network may have received a far more damaging blow than Saddam received. And, of course, luck may fall our way one of these days -- the $25 million bounty on bin Laden's turbaned head might finally prompt a local fortune hunter to ambush the world's most wanted terrorist. But the Bush administration's apparent haste to move on to other quarry, like North Korea's hermit tyrant or the obscure band of thugs marauding on a distant Philippines island, is not reassuring.

Meanwhile, Afghanistan -- the country we were aiming to rescue by eliminating the Taliban and its terrorist backers -- is a mess. According to a classified CIA report made public last week, the country is not exactly on the brink of civil war, but it's close. Warlords and other assorted thugs control the entire country outside the capital city of Kabul -- and even there the popular British peacekeepers have been fired upon and civil order is still shaky. Reports in the press -- including those from Salon's war correspondent Phillip Robertson -- paint a picture of a country whose valiant efforts toward peace and justice are widely frustrated by what its decent but beleaguered interim leader Hamid Karzai calls "the culture of the knife and the gun." Crime is rampant, even in Kabul and its surrounding villages, which are patrolled by 4,000 soldiers from Britain and other countries. Even relief workers have been kidnapped and killed. Last week, Dallas Morning News correspondent Gregg Jones filed a discouraging report about life in the Kabul area, where Northern Alliance "liberators" have reverted to form and are terrorizing the local populace, killing and robbing and preying on young women. "Many of the same Northern Alliance soldiers who were here before the Taliban are here again, and they took many girls away before," a young medical student named Nasima Makhail told Jones, explaining why she still covered herself in public. "Under the burqa we feel safer." (Those warlords who prefer boys are also back to their pederastic ways, according to another story in last week's New York Times.)

And outside Kabul, law and order is practically nonexistent, as Salon's Robertson documented when he took his life in his hands by traveling by car from Kabul to Kandahar, a route preyed on by heavily armed teenagers and highwaymen on motorcycles. When not worrying about bandits and warlords, the people who live in the Afghan countryside must contend with malnutrition and disease. And the drug business is back in full force, with farmers once again planting fields of opium poppies, even though Karzai has demanded it stop.

Despite Karzai's tireless efforts, government in Afghanistan remains a pipe dream. His own cabinet has been torn by sectarian violence, with assassins from one faction throwing his aviation minister from a plane and stabbing him to death on the tarmac two weeks ago. Government agencies, which have so far received just a sliver of the foreign aid promised them, cannot pay their own staffs. And with less military clout than a highway brigand, Karzai has no power to enforce his government's will. "Basically, Karzai is a hostage in his own palace," a Kabul businessman told Jones. "He doesn't have an army, and if you don't have an army in Afghanistan, you don't have power."

As Rumsfeld has acknowledged, "It's not a pretty picture." And administration officials are making the right noises about helping set it straight. They're telling the press that this Bush won't abandon Afghanistan, the way the first one did after the Soviet defeat there in 1989. They won't allow Afghanistan to slide into chaos and once again become a breeding ground for terrorism. But at the same time, Rumsfeld and his lieutenants are declaring they're dead set against "nation-building" in the ravaged country and "mission creep." The Pentagon has offered to help Afghanistan build its own military -- but that could take more than a year, and in the meantime, the country is at the mercy of its most savage forces.

The rock-jawed defense secretary who makes conservative pundits go weak in the knees won't even flex his muscles on behalf of the international peackeeping force. Karzai has pleaded with Washington to help expand the force so it can bring peace to more than Kabul, but Rumsfeld has told him, sorry, the bugles in the war on terror are calling America's armed forces elsewhere -- and besides, we don't want to get our hands dirty with the messy work of peace enforcement. We just do the glamorous opening salvos -- our allies can clean up behind us. But abandoning Afghanistan would be inexcusable, for both practical and moral reasons. Practically, if we don't put Afghanistan on the road to recovery -- and yes, that means nation-building -- it will collapse into terror-friendly anarchy. And morally, we owe something to the blameless Afghan people: After all, we just bombed their country. Yes, it was necessary and yes, we rid them of their tyrants, but in the process we created more rubble and misery in a country that has seen far too much of both.

Speaking of Rumsfeld, just what is the secret of this man's appeal? I can understand why some conservatives, with their deep need for strong father figures, get all gooey over his man-of-few-words Pentagon briefings. But why is the so-called liberal press so enamored of him? Are they grateful that a Washington authority figure "respects" them enough to tell them he's not going to tell them the truth? Are they relieved that an administration presided over by a goofy and inexperienced leader -- someone who still seems weirdly young at age 55 -- has a grown-up at home? Where was the blast of criticism from the media that should have immediately followed Rumsfeld's outrageous refusal last week to apologize for the screwed-up U.S. raid that killed at least 16 anti-Taliban fighters? Apparently apologies are for wimps like Clinton. This is precisely the kind of attitude that has so endeared our country to the rest of the world in recent weeks.

Over the weekend, the New York Times ran yet another story about our European allies "seething" over America's "we are the champions of the world" act. After Sept. 11, Europe rallied to the American cause -- the attacks gave President Bush "the wind of virtue," in the Times' words. But this international solidarity has now disappeared, gone with the winds of Bush administration arrogance.

The Europeans aren't the only ones feeling royally had by the White House these days. There are many of us at home who fully supported massive military retaliation against bin Laden and his terror apparatus. We still do. But as Chris Matthews astutely commented on Saturday's "Hardball," the war against bin Laden -- what Matthews calls "the firefighters' war" -- has been "hijacked" by neoconservatives with their own agenda. Somewhere around Tora Bora, Bush took a wrong turn and ended up on the road to Tehran and God knows where else. What is this neoconservative agenda? Matthews has suggested it's related to this lobby's support for Israel. But it's arguable whether putting aside bin Laden in favor of chasing evil around the world serves Israel's interests. And it certainly doesn't serve America's. (Talk about mission creep!)

On Sept. 11 the smug, amoral Saudi princeling named Osama bin Laden escalated his war on America. And with his galling air of superiority, bin Laden keeps promising to see this war through to its conclusion. Unfortunately, our own well-born leader lacks bin Laden's sense of focus. Bush's mission has struck off hither and yon and is in danger of losing not only international support but its very meaning. "Those who've escaped [the U.S. military] and are in Pakistan or Iran say al-Qaida and the Taliban are in safe places and preparing a counteroffensive," a Saudi sympathizer of bin Laden gloated in the Financial Times last week. "This tells supporters that the U.S. is living a fake triumph." If the United States is to win a real victory, it must single-mindedly track down the bin Laden cabal and make sure Afghanistan never again becomes a garden for their type of pestilence.