A backpacking tourist in Laos gets his hands on "The Fellowship of the Ring" just two weeks after its U.S. release. 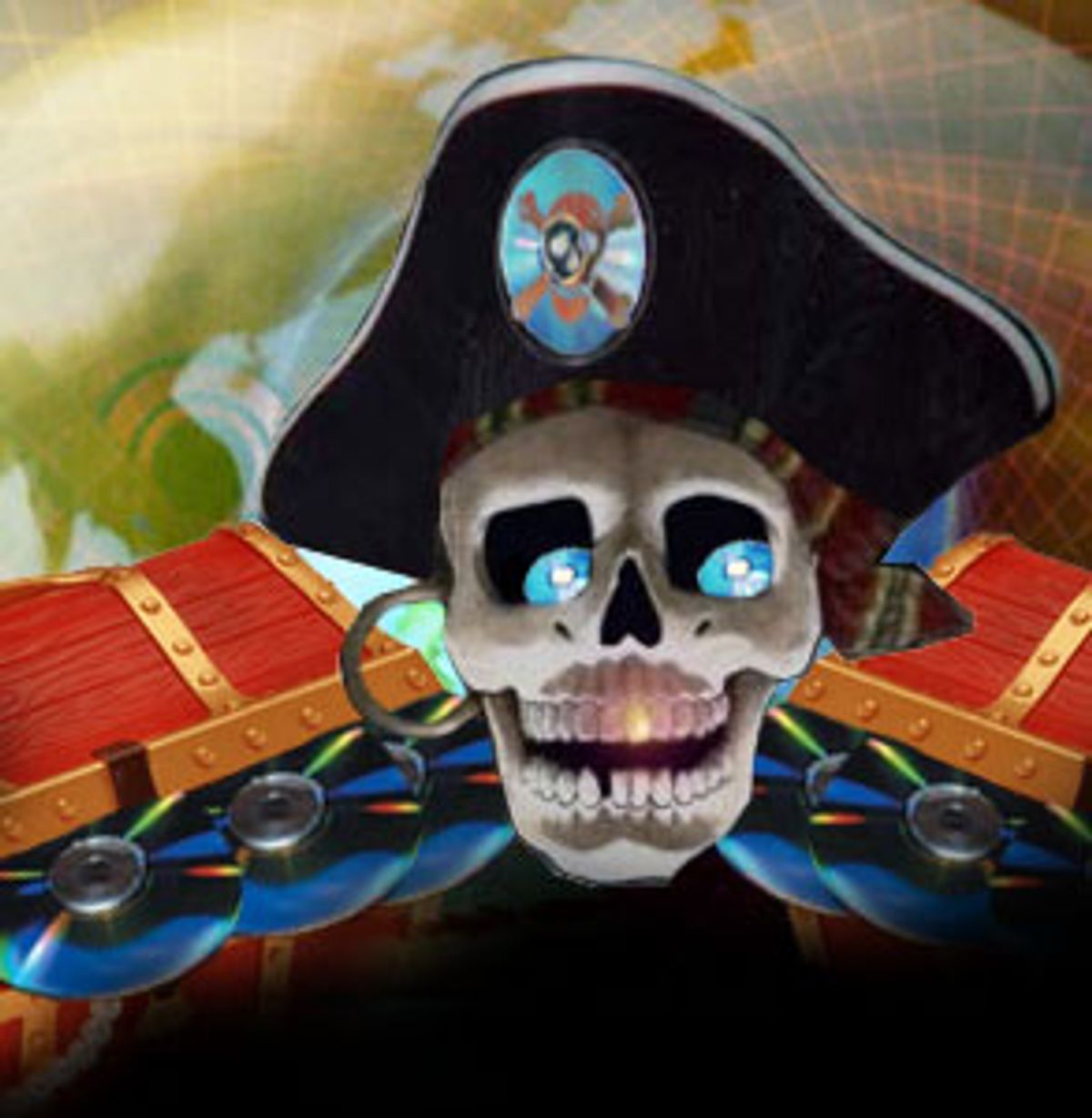 Like all markets in Cambodia, the Russian market in Phnom Penh is chaotic, packed with hawking and gawking merchants. The floors are littered and various hunks of animal flesh can be purchased, but by Cambodian standards the market is clean and fairly modern. Paint vendors stand next to motorcycle part sellers and a cluster of bootleg video vendors -- all in all, a typical Southeast Asian market.

After negotiating my way through a warren of stalls and struggling to get my bearings, I find the DVD section. There are about half a dozen vendors, but I go directly to a shop I have already visited. And there it is -- "The Fellowship of the Ring" on DVD. Barely two weeks after the movie has been released in the United States, I'm staring at a pirated DVD version of it in Phnom Penh. I ask the shopkeeper to demo the quality. He starts up the movie as I browse through his other stock. The video starts, and I wait for credits.

Not knowing how the movie begins I don't know how long to wait. After five minutes, I wonder if perhaps this is some elaborate hoax. I wait another five minutes. Finally I ask, and discover that this is actually the second disc of a two disc set. And it's a VCD -- a video compact disc. VCD no good. I want DVD.

I step over to the next stall, and am rewarded: LOTR on DVD. I ask for "Full Metal Jacket" as well. The prices for DVDs are pretty firm, unlike almost anything else in this market. I negotiate a 25-cent discount per title, and pay the man in a combination of $5 U.S. and the remainder in Cambodian riel. The total works out to $7.50 for the two DVDs. I step outside and grab the first moto driver away from the market. Many hours later, and after much fretting, my test of the DVD ensures that it does play on my iBook. I save LOTR for the next day and pop "Full Metal Jacket" in for a view.

In another week, I am in Vietnam, wandering the streets of Saigon, when I stumble down a side street into the worst nightmare of the Motion Picture Association of America. Shop upon cluttered shop of DVDs, VCDs, CDs, VHS cassettes. The DVDs flow forth in endless stacks of cellophane wrappers with semi-glossy inserts into my hands. Bootlegs of varying quality from all over Asia.

Most of the copies appear to be of Chinese origin, and many include Chinese subtitles embedded into the video stream. DVDs of Malaysian origin are generally of a higher quality and more recent vintage. Those from China sport cryptic DVD menus, and often choices limited to Cantonese and Mandarin for the soundtrack (with English subtitles, always). Universally, the text descriptions on the inserts are in sore need of copy editing (the title of "Braveheart" is mangled into "Bravegeart"), and sometimes even contain references to the wrong film. The quality tends toward the slapdash.

I walk away with a fistful of Bruce Lee, "The Bad Lieutenant" (NC-17 version), "Das Boot" (director's cut), "Heathers" and "The Indian Runner." But all is not as happy as it seems. You get what you pay for. Some of the DVDs are mastered imperfectly or contain so many glitches that they fail to play at all.

Finding a few DVDs that don't work on my iBook, I return to the den of intellectual property iniquity. This becomes a shopping spree that ends with almost 15 more DVDs in my possession and me scratching my head wondering exactly where I am going to fit them in my backpack as I continue to traipse across Asia. By now, I have gained some savvy -- I only patronize shops that have video equipment available for viewing prior to purchase. But even this isn't surefire. I end up with a copy of "Natural Born Killers" that won't work on my iBook even after playing acceptably in the store. I can only imagine how many foreigners purchase one of these poorly mastered DVDs to play at home, sight unseen. In my experience, these DVDs are not sold into the local market, as VCD equipment and media still predominate locally.

I finally view "The Fellowship of the Ring" in its entirety for the first time at a guesthouse in Luang Prabang, Laos. It's common for guesthouses along backpacker trails across Asia to host films, usually on a large-screen television, predominantly bootleg VCDs. It's a nice way to sell some extra beer, attract new guests and bring in some additional revenue.

I offer to show any of my films at the guesthouse. I am thinking maybe a double feature of zombie flicks with "Dawn of the Dead" and "Evil Dead," or a night of bad cops with "The Bad Lieutenant" and "Romeo is Bleeding." The managers of the guesthouse are thinking money: They want "Lord of the Rings." I say "no problem." After a couple of glitches getting the video out from the iBook to the TV, the movie plays to an audience of maybe 10 to 12 people. Far less than the full house for "Harry Potter" the night previous.

The little things I had overlooked about the quality when just previewing come into the glaring foreground with an audience. The sound quality is barely adequate. The color is far from rich. It would seem that this bootleg was created by smuggling a camera into a theater and filming the screen. You can hear the audience chuckling at the jokes. A couple of minutes are missing here and there, either because a battery change was in order, or a head was in the screen. Characters speaking in the Elven tongue are subtitled in (presumably) Chinese, instead of (presumably) English. Credits are entirely left off at the end. All in all the quality is in the realm of passable, but barely.

Still, in a country like Laos, where I was unable to find a single movie theater, you take what you can get. "The Fellowship of the Ring" now sits in a stack of over 20 DVDs awaiting its turn to be played again. I am trying to fight the urge to return to the DVD market for more carnage and needless weight to tow. I do need to replace "Natural Born Killers," and there are dozens more shops waiting to tempt me. But mostly I am trying to grasp the economics at work here. I've been visiting countries where the per capita income is often less than $1,000 a year, and it has cauterized whatever sympathy I have left for the gluttons in the Hollywood food chain.

I realize that I am depriving the very artists I most appreciate of compensation, but I rationalize it all away with the thought that a disproportionate piece of the pie ends up in the hands of the same soft-porn schlock merchants pumping out the tons of trash that can't even sell for $1.50 in some little stall on a side street in Saigon.

Jeff Radice moved Salon from Windows NT to Linux. He's currently enjoying the dot-com downturn from an island in the Gulf of Siam.