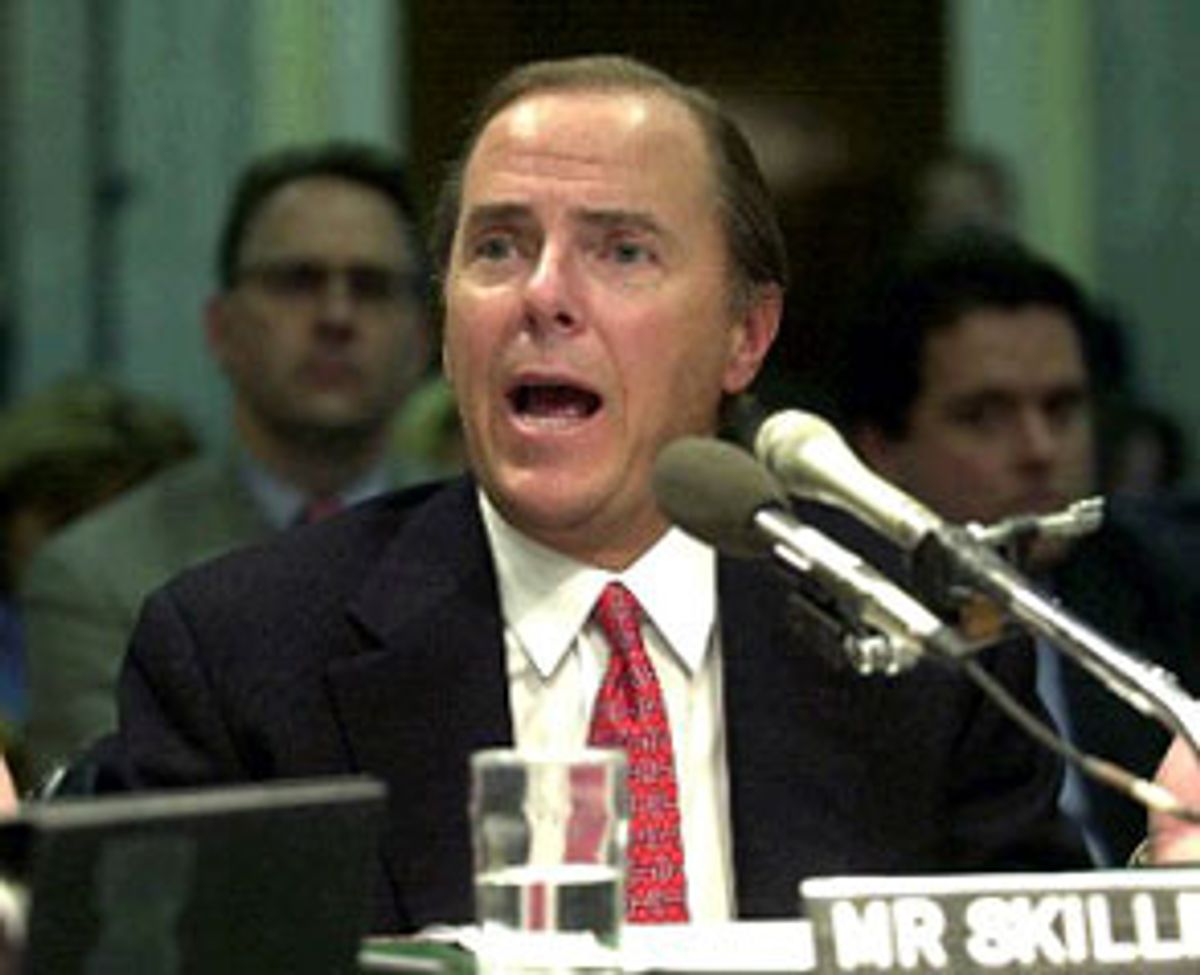 No doubt some other ex-Enron employees, their life savings long gone, would disagree with Skilling. Or at least think Lay deserves dinner and a movie first. But the rather stunning remark exemplified the righteous indignation Skilling brought with him to the Senate Tuesday morning.

The strategy was at least somewhat effective. Since Skilling -- one of the few Enron executives without what Sen. Peter Fitzgerald, R-Ill., referred to as "the Fifth Amendment flu" -- last testified before Congress, many members of Congress have said that they suspect him of having committed perjury. Rep. Billy Tauzin, chairman of the House Energy & Commerce Committee, told CBS that Skilling seemed to think "that he could come and just, you know, flamboozle us, just tell us anything he wanted, and we would buy it. I'm afraid he may have put himself in some legal jeopardy as a result."

But throughout the five and a half hours of his second appearance, few senators seemed able to pin Skilling down on any examples of any clear lies, however unbelievable some of his claims may have been. Skilling aggressively, arrogantly, rebuffed their charges, occasionally turning the tables and questioning his inquisitors.

Likewise, the hearing, billed as a senatorial Thrilla in Manila, with Skilling confronting two of his company nemeses, Enron president Jeff McMahon and vice president Sherron Watkins, did not live up to hype. Both McMahon and Watkins have been lauded as whistleblowers for expressing concerns about the questionable partnership arrangements. "I wish there had been more Miss Watkinses and Mr. McMahons in the organization," effused Sen. Olympia Snow, R-Maine, though it's worth pointing out that neither complained of the alleged chicanery to anyone outside the company, such as an SEC official, or in any way tried to prevent thousands of Enron employees from losing their shirts.

Still, despite the compliments, McMahon and Watkins both seemed somewhat cowed in Skilling's presence. McMahon was lauded for his March 2000 meeting with Skilling in which he expressed his concerns about the questionable partnerships formed by Skilling's protégé, former chief financial officer Andrew Fastow, which created awkward conflicts of interest. Skilling, sitting only one lawyer away, continued to describe the meeting as one in which McMahon was mainly concerned about his compensation. McMahon didn't have much to say about that.

Watkins, who had called Skilling a "swindler" in her House testimony, found herself even occasionally agreeing with some of his assessments. The biggest embarrassment Watkins caused Skilling Tuesday may have been when they stood to be sworn in, and she towered over him.

Long before Skilling insisted that Lay didn't deserve the fate wished upon him by California Attorney General Bill Lockyer, who told the Wall Street Journal last May that he "would love to escort Lay to an 8-by-10 cell that he could share with a tattooed dude who says, 'Hi, my name is Spike, honey,'" Skilling was true to his own peculiar form: a type A on Planet Nine.

He continued to insist that Enron was in sound shape when he left for "personal reasons" last August. The company collapsed not because it overstated its worth by approximately $1 billion due to the debt hidden in the shell partnerships set up by Fastow, Skilling insisted, but because investors and banks got nervous and there "was a classic run on the bank" like in the 1880s. The Harvard MBA who was able to riff endlessly on the difference between a low correlation and a "naked" hedge continued to plead ignorance of basic accounting.

Throughout the hearing, Skilling said that the partnerships were OK'd by the accountants, and that that was all he needed to know since "I am not an accountant." He said he "did not know that there was an absolute prohibition against" a company using its own stock to generate a gain or avoid a loss on its income statement, which Enron is accused of doing to hide debt. But Skilling was too smart and too arrogant to convince the senators he didn't know better. After Skilling confused the committee members with biz-speak, Dorgan said, "You seem to know more about accounting and finance than you let on."

At the beginning of it all, Skilling insisted that the charges against him were false. He had "not lied to the Congress or anyone else about my recollection of events while I was at Enron," he said. Nor did he dupe Lay, as Watkins seemed to have alleged previously. He then offered "a few observations about this congressional process, to which I and others have been subjected." Apparently Enron's collapse isn't the real outrage, Skilling said -- what's really outrageous is when politicians shamelessly demagogue him and his senior exec pals. He even invoked the framers of the Bill of Rights who, he warned, were watching.

"What has happened thus far -- primarily in the House -- should be cause for concern of every American," Skilling said. "The entire management and board of Enron has been labeled everything from hucksters to criminals, with a complete disregard for the facts and evidence assembled." Calling himself an "innocent," Skilling said: "Common decency suggests that I be treated as innocent until proven otherwise. Common sense suggests that accusations made now, before the facts are in, are likely to be wrong." But neither happened "in this politicized process," he said.

With that, the games began. Much of the ground had been covered. Sen. John McCain, R-Ariz., the committee's ranking Republican, said that he thought the public should receive "accurate assessments about a company's financial health." Sen. Kay Bailey Hutchison, R-Texas, the No. 1 recipient of Enron campaign donations, used the opportunity, as she did when Lay testified, to push pension reform.

But most of the questions -- when there were actually question marks at the end of the meandering filibusters -- seemed mostly like aerobic venting. Sen. Max Cleland, D-Ga., decried the culture of "arrogance and intimidation" that Watkins had described under Skilling, a culture that surely no senator could be even remotely familiar with.

"Appearing before the House, you disclaimed responsibility," said Fitzgerald, encouraging "the perception that Mr. Andrew Fastow played perhaps the pivotal role in the company. But if the theory is that Fastow went rogue somewhere deep in the jungles of Enron -- and was the sole agent of the apocalypse -- I just don't buy it." With Kurtz-like indifference, Skilling drank his water.

Sen. Barbara Boxer, D-Calif., slammed Skilling for the insensitivity he demonstrated last May by repeating the lame and stale joke contrasting the Golden State, then beset with an energy crisis, with the Titanic. ("At least when the Titanic went down, the lights were on," Skilling yukked at the time.)

"I know Mr. Lay," Skilling said. "I've worked with Mr. Lay for a long time. Mr. Lay doesn't deserve prison rape or the suggestion by the top law enforcement official in the state of California that he be raped in prison when he hadn't been charged with anything and hadn't been found guilty of any issue."

Legal analysts have speculated that one reason Skilling may be cooperating with congressional, SEC and Justice Department inquiries is that in doing so he can see the evidence at hand. (At one point Skilling even lauded the House Energy & Commerce Committee staffers, though he had lambasted their bosses.) Under intense if uncoordinated questioning by Sen. Ron Wyden, R-Ore., that strategy seemed to prove effective.

Wyden pointed out that Enron attorney Jordan Mintz testified before the House that he tried, unsuccessfully, to secure Skilling's signature on approval sheets for the controversial shell partnerships Fastow had set up. But Skilling, armed with documents obtained in the previous hearing as well as through cooperation with the committee, quickly rebutted Wyden's point. "Back up, back up!" Skilling instructed the man he called "Mr. Senator." Though Wyden claimed that minutes from an October 2000 meeting indicated that Skilling needed to sign off on the transactions, Skilling was now familiar with the memo and pointed out that the minutes were not of the rules, but of Fastow "representing that that's what the process was. Mr. Fastow was in error," he said.

Though he wasn't asked, Skilling said that his solution to the problem would be to prohibit lenders from pulling their loans from companies like Enron that are on shaky ground. That, "in the business world, is tantamount to walking into a crowded theater and screaming 'Fire,'" Skilling said. That was the law he would make "if I were in charge of the world," he said. You got the impression that, biggest bankruptcy in the history of the country aside, he thought he could do a pretty good job at it.