If looks could kill

The glance Sherron Watkins gives her ex-boss tells us all we need to know about Enron's sexual politics. 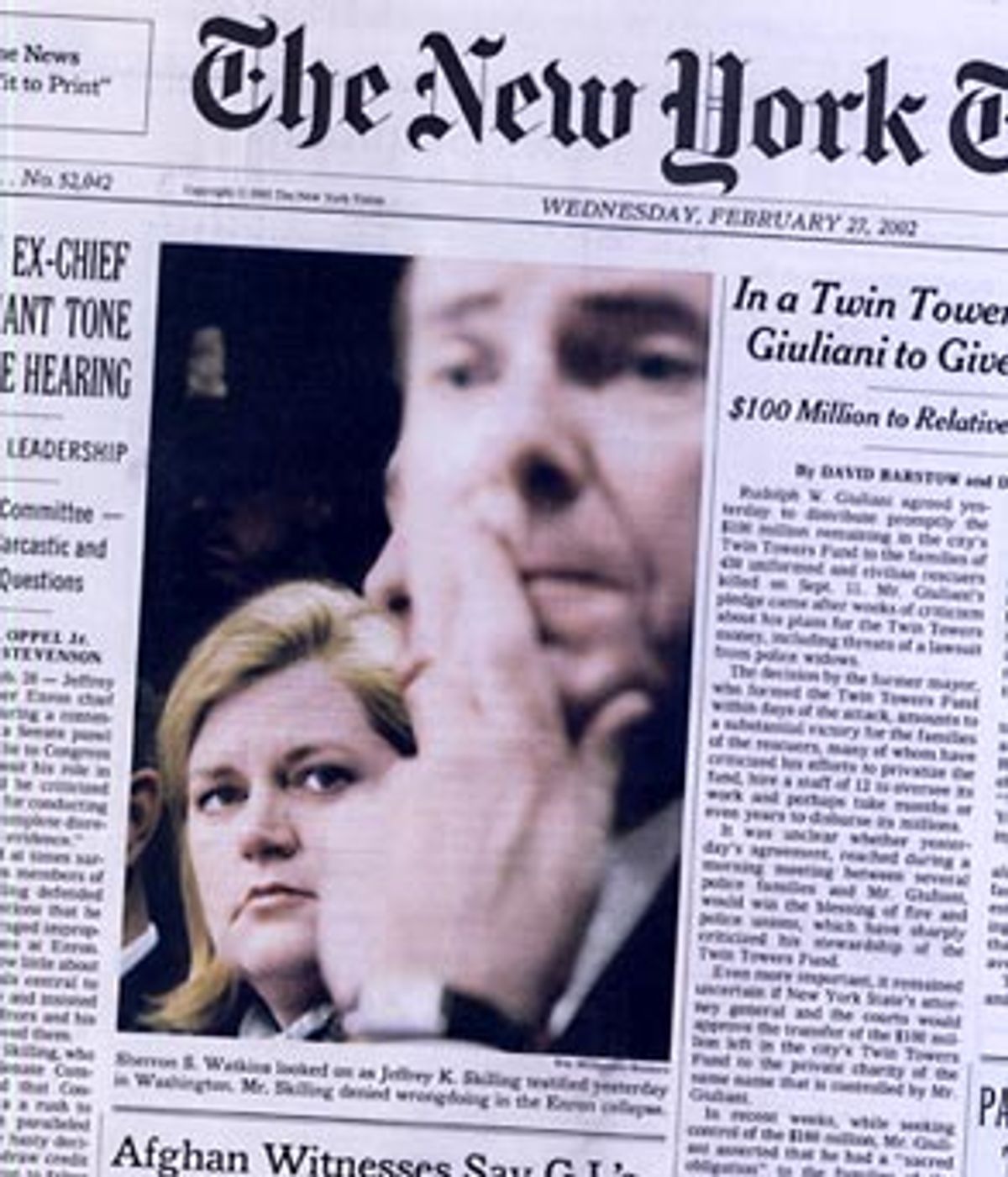 There's a photograph on the front of the New York Times Wednesday that says so much about sexual politics and the workplace hustle. It's a beautifully calculated double-portrait (by Win McNamee/Reuters) with Jeffrey Skilling in the right foreground, tactfully out of focus, and Sherron Watkins to the left and behind him, looking at him with a mixture of disbelief and contempt that is wonderfully balanced by the haze of Skilling, his resolute looking away and the manner in which his hand is half-covering his mouth.

I hasten to add that in no way am I suggesting that there was ever any romantic or sexual connection at Enron between Watkins and Skilling. I suspect she loathed him, just as he had written her off as someone "unattractive." She has admitted that she felt intimidated by him, and you can feel that in the lofty way he ignores her in the picture. Doesn't every woman in the workplace know the body language of the superior male's put-down, that magnificent silence that dares her to utter or exist? It's a way of behaving learned in handling servants and stale wives.

The picture was taken as the two former colleagues testified (under oath) at a Senate panel investigating the Enron collapse. More or less, it is the contention of Watkins (a vice president at Enron) that Skilling (the former chief operating office) was paid, hired and qualified to run the company -- meaning that he knew what was going on, understood its intricacies and possible illegalities and was responsible for them. She is joined in these beliefs by several senators who marveled that Skilling now claimed such extensive ignorance of business and accounting procedures.

In this land of laws, business practice and still serene male chauvinism, it is an open question as to whether anyone will be identified, charged, convicted and properly penalized in the whole Enron scandal. It may prove too complicated for judgment. The evasive skills of the accused and their top-class lawyers may lead to stalemate. But I'd like to suggest that anyone who has worked in a large organization -- rife with the male exploitation of women -- knows from this picture what happened.

The faces and attitudes McNamee captures so vividly are integral to the still pervasive belief that women in the workplace must be more than exceptional to survive and succeed, making them vulnerable then to charges of being lesbian, men-haters or "unbalanced." Whereas, it is an equally pervasive condition in our culture that the men's club in authority takes advantage of its position and false privilege at every step. Above all, in business as in domestic matters, male bullying (rooted in terror, I think) still tries to exclude women from natural, open, equal discourse. It happens in the office, and it happens in bed. No amount of "advances" in women's rights should kid us that the problem is diminished or even in retreat.

There is a corollary to the resentment in Watkins' face. It is that Mr. Skilling resigned from Enron last August, abruptly, and allegedly for private and family reasons. He was "flat-out tired." "I had issues in my family that were more important to me ... I had neglected some things that needed to be dealt with." This wistful mender of fences, who resigned only after cashing in some $66 million worth of Enron stock, is now engaged to Rebecca Carter, once a secretary at Enron, but promoted under Skilling to secretary of the board of directors at a salary of $600,000 a year.

Thus my conclusion: that "a skilling" be a new word, admitted to the lexicon, meaning the well-timed stripping of old assets so as to furnish a getaway.