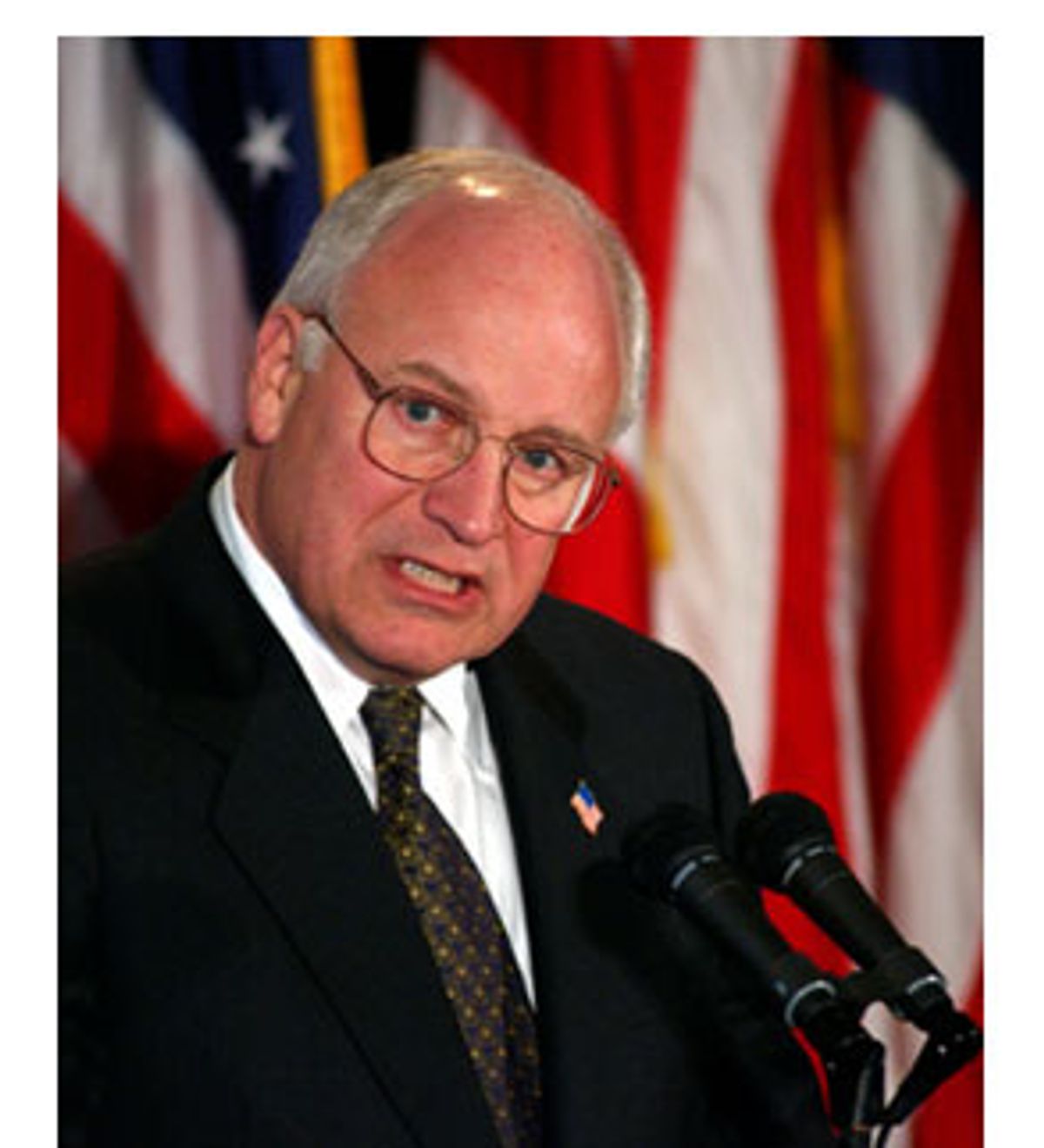 You know that if Democratic National Committee chairman Terry McAuliffe and the National Review agree about a Bush administration policy, the White House is probably in real trouble. But the unusual coalition leaning on the White House to come clean about the energy task force doesn't stop there. Conservative watchdog group Judicial Watch has joined forces with the Sierra Club, conservative Andrew Sullivan with neo-liberal Arianna Huffington, all to demand that the White House turn over documents concerning the formation of the administration's energy plan.

You can add U.S. District Court Judge Gladys Kessler to that mix as well. Kessler issued a ruling Wednesday ordering the Department of Energy to hand over more than 7,500 pages in documents related to the energy task force to the National Resources Defense Council.

The congressional General Accounting Office, the investigative arm of Congress, has filed a similar lawsuit against Vice President Dick Cheney, seeking his office's notes about whom the task force met with while its members created the administration's energy policy.

The responses of Cheney and the Department of Energy to the document requests illustrate the lengths to which this administration has gone to keep the energy task force meetings shrouded in secrecy. To avoid public scrutiny, the DOE and Cheney's office have employed two very different techniques. Cheney and his aides have consistently mischaracterized the nature of the GAO's requests, and said the GAO suit threatens the very ability of the executive branch to conduct business. "This is about the ability of future presidents and vice presidents to do their job," Cheney told CNN's John King last month. "And they've always had the capacity in the past to get honest, unvarnished advice, to have people come in and speak the truth without fear that what they say is going to appear in the front page of the newspapers the next morning, and we need to preserve that principle."

The Department of Energy, meanwhile, has apparently chosen to ignore the NRDC's requests for nearly a year, arguing that they have been complying with the law all the while.

"We've always said we would comply with it, and we are working diligently to do so," DOE spokeswoman Jill Schroeder said Wednesday.

But NRDC attorney John Devine scoffed at Schroeder's definition of compliance. "The law requires disclosure within 20 days [of an FOIA request], and it's been nearly a year. It's hard to define that as compliance in my view," he said. "The Department of Energy can characterize this as they will, but we think that it's unfortunate they stonewalled as long as they did and that we were forced to ask a federal court to intervene.

Kessler's opinion was unequivocal. "In addition to having no legal, or practical, justification for working at a glacial pace on plaintiff's [Freedom of Information Act] request until suit was filed in December, the material which plaintiff seeks is of extraordinary public interest," she wrote. "The subject of energy policy, especially since the terrible events of Sept. 11, 2001, is of enormous concern to consumers, to environmentalists, to the Congress, and to industry."

While there may be significant overlap between the documents sought by the NRDC and by the GAO, the documents requested by the GAO should be more comprehensive, according to the NRDC's Devine. The NRDC requested documents only from the Energy Department, but Devine speculates there are other meetings Cheney had with industry representatives or other government officials that did not involve anyone from the Energy Department, and so would not fall under the purview of NRDC's request.

But NRDC attorneys were not shy about speculating as to why the White House wants so desperately to keep the energy task force documents away from public scrutiny.

"The energy plan reads like a wish list for corporate polluters," Devine said. "We've heard reports that the administration met with a lot of big energy companies. We know that the plan gives billions in subsidies to the coal, oil and nuclear energy industries, and we want to know the most basic information about the task force -- including the big energy company lobbyists who may have helped draft it."

Such speculation was fueled even further Friday after the New York Times reported that 18 of the top 25 contributors from the energy industry to the Republican Party were granted an audience with Cheney's task force last year.

Kessler's ruling is the first in what may be a series of legal showdowns between the executive branch and groups or individuals fighting to get public documents. Devine says from Day 1, the Bush White House has been far more reluctant than other administrations to cooperate with FOIA requests. That has only gotten worse since Sept. 11, and now advocates fear the White House is using the terrorist attacks as justification to keep information away from the public.

In October, Attorney General John Ashcroft sent out a memorandum to government agencies saying the Justice Department would back up any agency's efforts to stymie FOIA requests as long as there was a "sound legal basis" for doing so. That is a change from the Clinton-era policy, which held that documents should be withheld only if "disclosure would be harmful."

In November, President Bush signed an executive order delaying the release of Ronald Reagan's confidential communications with his advisors. Under the Presidential Records Act, those papers are supposed to be released 12 years after a president's term ends, which would have been Jan. 20, 2001, in Reagan's case.

Critics say Bush's move to stop the release of the Reagan papers was meant to protect former Reagan aides who have ties to the current president, among them Secretary of State Colin Powell, economic advisor Lawrence Lindsey and, of course, Reagan's vice president, George Herbert Walker Bush. The White House had denied those claims.

But the administration's foot-dragging has brought criticism from liberals and conservatives alike. Among the harshest critics of the Bush administration's secrecy has been Judicial Watch, which has its own FOIA suit against Cheney currently winding through the courts. Its recent report on the Bush administration compared Cheney's attempts to keep the public out to Hillary Clinton's efforts to keep her 1993 health care task force secret. For anyone who knows Judicial Watch, comparisons to Hillary Clinton are never a compliment.

"The President and Vice President have also refused to turn over records and documents concerning their dealings with Enron, a thoroughly corrupt company that made large contributions to the two major political parties," the report states. "Americans overwhelmingly support his leadership in the war, but almost 70 percent think his administration is hiding something in this latest mega-scandal. We rejoice at the end of the Clinton regime, yet we are worried that Clintonism is still the ethic of this city."

Democrats realize that the administration's pattern of stonewalling the public is a good populist issue, and have been quick to blast the Bush administration for its penchant for privacy. The DNC has started sending out daily briefings, which it calls "A daily review of the White House's attempts to keep America from learning their secrets." Earlier this week, the Democratic Congressional Campaign Committee launched a new Web site called DiscloseTheDocuments.org

The next test of the DOE's willingness to comply comes on March 25, the deadline Kessler set for the department to hand over its documents pertaining to the energy task force. "For now," says Devine, "it's just a matter of watching the mailbox."