The Life and People sites offer a week of articles about many-splendored living things, some of them furry, all of them edible. 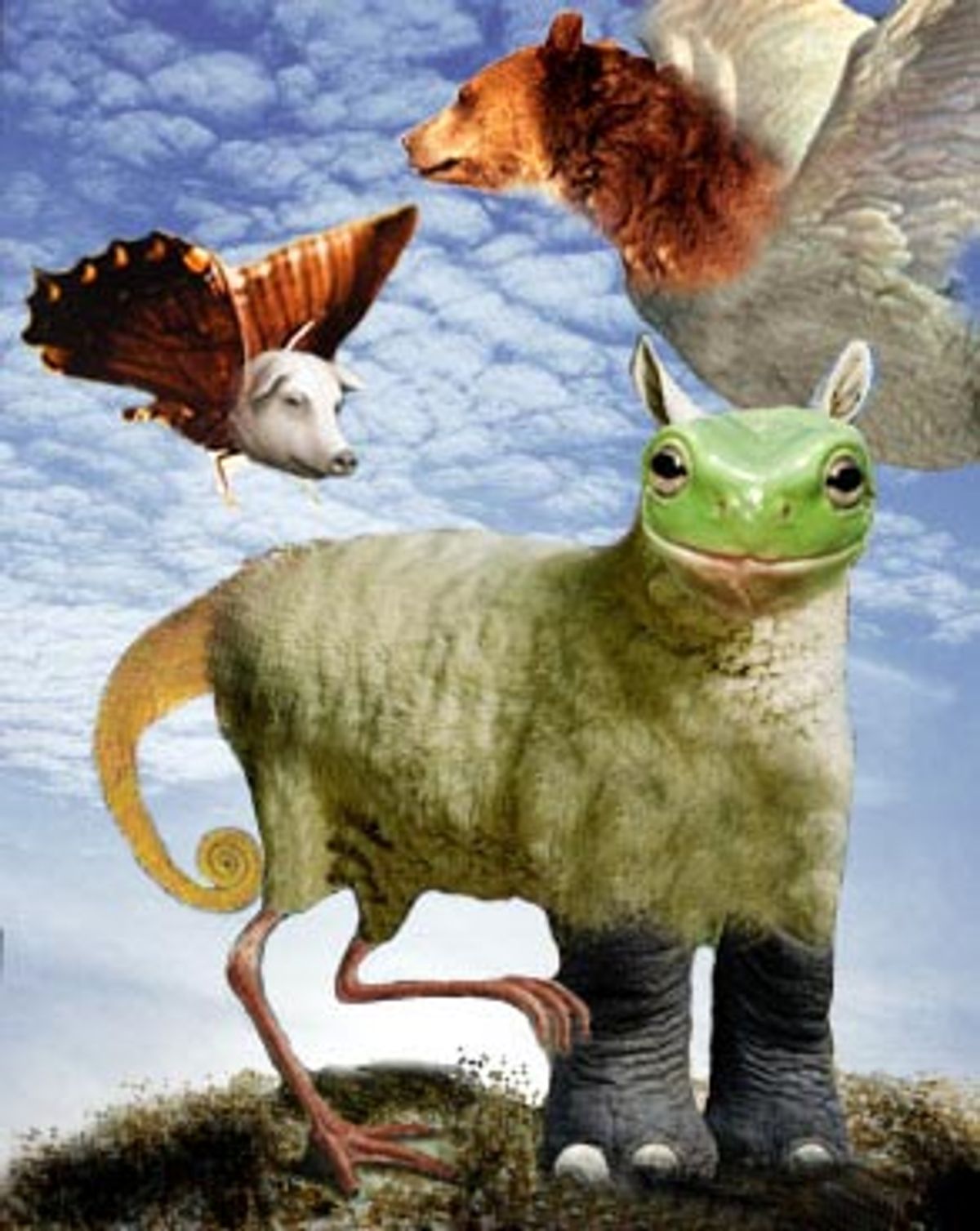 Whether you love animals, hate them or feel indifferent toward them, there is a good chance you also eat them. Is it any wonder that our feelings about beasts are so complicated? We exterminate the brilliant and industrious ant. We pay top dollar to clone Texas tabbies. We obliterate whole species of creatures as a way of life. Yet we go to bat for puppies in Kansas who were about to be fed by a high school teacher to the class snake.

Certain species of animals have achieved iconic status (the lion, the bull, the dove) that almost transcends their animalness. Consider the horse. A glimpse of a galloping stallion stirs up all sorts of feelings related to freedom, power and independence -- even for those of us who have never ridden a horse. That's why a picture of a man in a cowboy hat, or better yet, a guy wearing such a hat while perched on a horse, is still one of the most potent images in advertising -- for both products and politicians.

Other creatures evoke in us a fierce passion and protectiveness (think panda, polar bear, tiger), an effect which informs the label "charismatic mega-fauna" and explains the relative ease with which conservation groups can solicit funds in their behalf. Millions of less seductive living things -- the Delhi Sands flower-loving fly, the Stevens kangaroo rat, the fat pocketbook pearly mussel -- are easily dismissed for obvious reasons, despite their endangered status. But when you find out about, say, the Texas blind salamander, a translucent cave-dweller with visible organs and blood-red external gills, it's hard not to at least want a few to hang in there.

And then there are the mundane creatures whom we love with special fervor -- our pets. As witnesses of -- and sometimes participants in -- the traumas and triumphs of our daily lives, they are no less than immediate family, more or less related by marriage. Yet, let us not forget those who are repelled by this notion, and the animals involved. A certain editor's spouse, whom we will not name, tolerates household pets with undisguised contempt, frequently suggesting that the attention focused on the dog, which can take the form of actual kissing, is a ridiculous waste of time.

Both authors of this article are avowed dog-kissers, considered by some to be slightly (or very) eccentric. But we have an excuse. We were brainwashed: Doug, the People editor, as a result of growing up in the country with dogs, horses and other livestock (including pet butterflies, moths and a preying mantis named Jesus); Jennifer, editor of Life, as the child of a bleeding-heart veterinarian who brought home every condemned patient he ever met (a three-legged mutt, deaf cat, and vindictive terrier, among others). We enjoy animals as a connection to the past -- the greatest hits of our childhoods. But we also have them to remind us of the benevolence of voiceless creatures, to remind us that we share the planet with species other than our own.

We are not exactly Bardot-grade animal lovers, but we are the type who might be asked -- and we have been -- why we would concern ourselves with the welfare of animals when so many people are suffering. To this, we say a couple of things. First, we are multitaskers. We find it easy to care about more than one kind of living thing at a time. Second, it is by concerning ourselves with creatures that we will begin to end the suffering of human beings. The more life forms there are in a place, the better that place is suited to support life. With all its living components intact, a region will clean its own water, generate oxygen, enrich soil and maintain a healthful climate. That is more, certainly, than what humans have tended to bring to the eco-table.

Of course, we have been known to romanticize and anthropomorphize animals from time to time. Both of us talk to them a lot, and sometimes we are jealous of what we project to be their superior mental health. Mostly, though, we are impressed, fascinated and respectful. In a tiny passage from his most recent book, "The Diversity of Life," the great naturalist Edward O. Wilson sums up the source of our awe: "A mite has been found that lives entirely on the blood it sucks from the hind feet of the soldier caste of one kind of South American army ant. Tiny wasps are known whose larvae parasitize the larvae of still other kinds of wasps that live inside the bodies of the caterpillars of certain species of moths that feed on certain kinds of plants that live on other plants." It makes "the leg-bone's connected to the hip-bone" sound pretty lackluster by comparison.

Wilson, in an earlier essay, points out that "even though some 1.4 million species of organisms have been discovered (in the minimal sense of having specimens collected and formal scientific names attached), the total number alive on Earth is somewhere between 10 and 100 million." No one knows which is the more accurate figure. But given their numbers, and the specificity of their roles on the planet, it is hard not to accord even the most dull or threatening creature a great deal of admiration, if not gratitude.

And that is what we are attempting to do, in our own small and perhaps quirky way, this week, as the People and Life sites collaborate to bring readers five days of articles on everything from rats to orangutans to bomb-sniffing dogs. Also included is a sampling of animal comics by Lynda Barry, a cartoonist who seriously believes that the smell of a warm, adoring dog can cure illness.

For those who might be described as animal pragmatists, we will feature a new recipe each day, excerpted from Calvin Schwabe's fine, and occasionally repellent cookbook, "Unmentionable Cuisine." The recipes, which include "Stewed Cane Rat" and "Baked Armadillo," as well as "Red Ant Chutney" and "Cockchafer Soup," will not, as Craig Claiborne has pointed out, "appeal to all palates." But we figure that vegetarians will at least get a kick out of their titles. Bon appétit.