Wilde called fox hunting the "unspeakable in pursuit of the uneatable." On the upside, it's got all the thrill of battle and only 25 percent of the injuries. 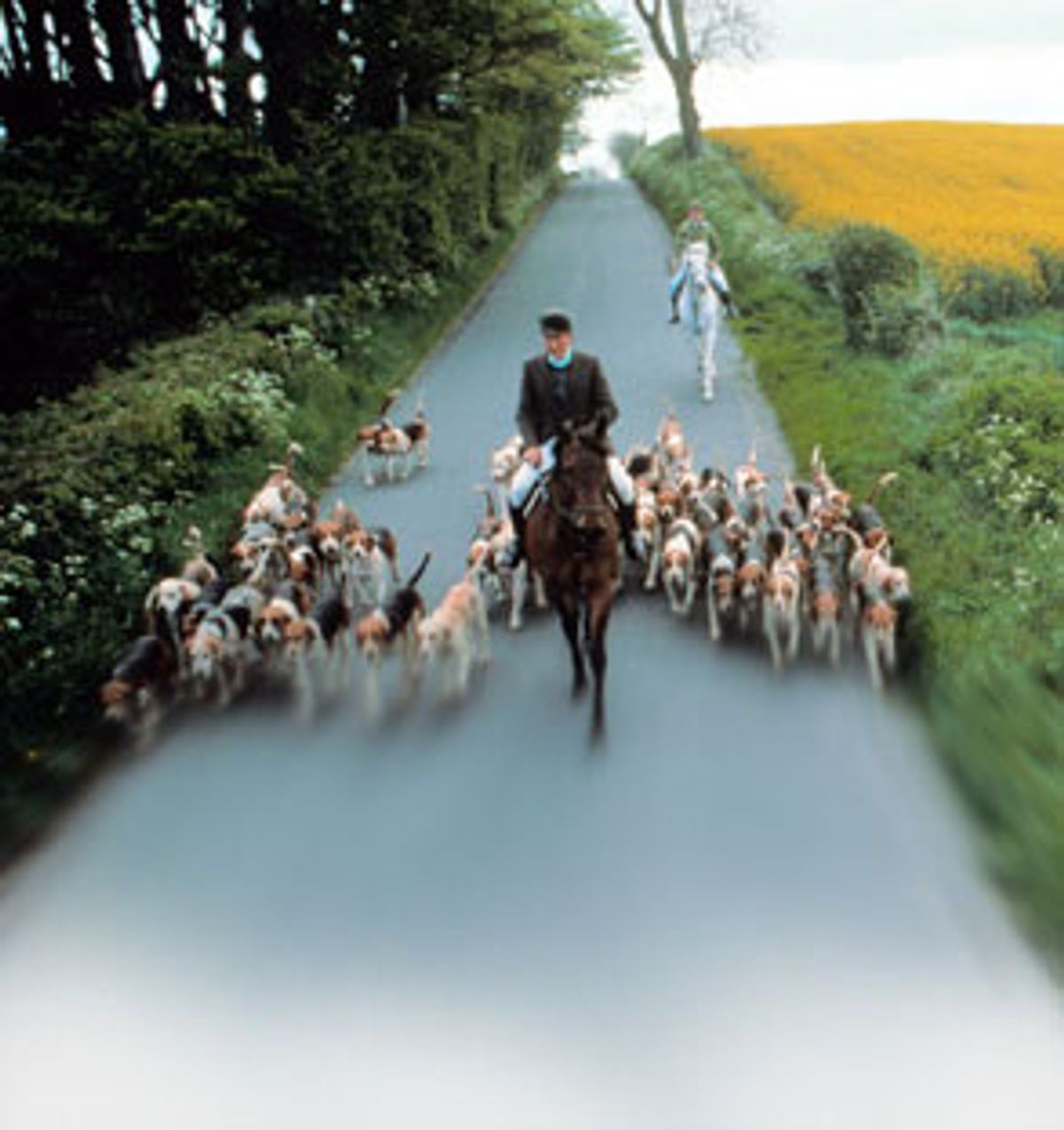 As part-time jobs go, this is the worst-paying one I've had since high school, but the perks are irresistible. I exercise horses. These are hunting horses -- tough but saintly types who are expected to be able to run pell-mell in a steaming herd but never dislodge their cargo, which would be unable to write checks for pricey equine upkeep with their arms in casts. My job is to keep the little monsters in line. Some of them are so battle-hardened that they'll never behave. But even with the worst ones, I go bopping through the woods and meadows, wrestling as I go, and it was on one such run that I and a stumpy, muscle-bound bay gelding nicknamed Pork Chop nearly collided with a tawny animal the size of a motocross bike. Motionless and unperturbed, it tried to stare us down with its amber eyes. Chop, dumb as he was, didn't flinch. "Tally fucking ho," I whispered to the coyote.

Sporting opportunities for fox hunters having been restricted in recent years, coyotes have increasingly become the quarry du jour, and this was hunt country. The Old Chatham Foxhounds, in fact, were kenneled just over the hill in this Hudson Valley settlement: They'd hear me on my way back to the barn and start their usual small-scale riot. Far from being a dying ritual in the U.S., though, fox hunting is thriving in agrarian pockets all over the place (unlike in the United Kingdom, where it is increasingly under fire). Private owners hang onto vast tracts of land they'd otherwise sell, keeping them open to the equestrian public and frequently to hikers, too. There are foxes aplenty where I live, if you can judge from how visible they are.

Anything killed in a day's hunting, however, is likely to be human. I've seen people launched, stepped on, and kicked so hard while mounted that they were knocked writhing to the ground. I've still never met anyone who's been "blooded" (present at a fox's death). The game is all about the scenting abilities of the hounds and the fox's strategies for laying a trail. There are no guns, traps or cages; foxes aren't released from boxes and chased, despite what most people think. There are days when it's too dry, too wet or too windy for the trail to be sniffable. That's supposed to be the beauty of the sport -- chance and glory, scarlet coats, the trees in autumn, dead-game horses, the sound of the horn, the thrill of a run. Some of the newbies are only in it for the clothes, but that's natural. The only time in my life I've ever looked presentable was on a horse.

Foxes look and act a lot like cats and are just as sly as they're said to be. Coyotes are a different story. A fox will run in spirals in a field and then cut out over its own trail. Your coyote will jump up and run in a straight line like Secretariat going for the wire. That's why a day of hunting in the Hudson Valley trolls between boredom and suicide, and why, when offered a sporting proposition because the boss lady was out of town and her hunt horse -- my favorite student -- was idle, I said yes.

Breakfast and coffee must be taken early. Once you get hunting, there are no opportunities to pee. So it's up at 5:00, guzzle whatever you can and construct the regulation outfit, which has changed little since the 19th century and from which you must not deviate -- not if you ever want to go again. On with the long underwear and thin socks (thick socks don't fit under riding boots), then the white shirt with stand-up rat-catcher collar and the stock, a white ascot that must be knotted around the throat and secured with a three pins, only one of which may be visible, so you look like Orson Welles in "Jane Eyre." This is hard to do before you're awake. There are instant ones. They look cheap.

Ladies and men wear tan, buff or canary britches and tall black boots, preferably custom-made, for which the big shots particularly love to shell out a grand at Vogel in New York. (Mine are off-the-rack, but they fit.) Men get brown leather tops on their boots, ladies get black patent, while guests of both sexes wear theirs plain. Professional hunt staff of either sex, including the masters of foxhounds and the huntsman (the hound expert) sport the scarlet coats, correctly termed "pink." Ladies wear severely tailored black Melton with a collar of contrasting color and special hunt buttons, if they've been awarded the privilege. Men similarly favored also wear the pink coat. Mine is black. Everyone needs white "string" gloves and a velvet-covered crash helmet replacing the traditional bowler. Ladies may carry sandwich cases. Flasks are strictly -- I hate this -- for men.

Last of all, you need a horse. Mine for the day was a fat palomino with the personality of a locomotive. Edam is barely controllable under the best of circumstances, but I had to prove I'd done my job and taught him something. Besides, I love him. He does this thing where he grabs my jacket in his teeth, but jokingly, like Don Rickles. Chop is his best friend, and they get onto the horse trailer like two little old ladies on a bus.

At the meet, you adjust your tack before you move off with the "field," or group of riders, after which you must be smoothly functional and utterly silent. The huntsman, in this case a woman who rides a Harley to the kennels, gathers her hounds and pushes them ahead of us into the woods. Forty horses all crowding down the same path is a lot to work with. Clattering across the slippery road, they strike sparks with their hooves. On the other side, the field stretches out ahead, and like a roller coaster, chugs into motion. I can feel Edam's afterburners click on. Five horses ahead of me, my riding teacher is sawing away at a towering $25,000 Irish import that's doing grasshopper leaps with its teeth bared. With Edam revving so hard he's throwing clods of dirt into the air, we take up off the hill at a gallop.

Running horses look sublime, but that's not how they feel. The ground comes up at you hard. The horse flattens out its body, drops its whole carriage about eight inches and grabs the ground like a radial saw blade. Vroom -- you know in every cell of your body how strong they are. But you get only a minute to contemplate this, because it's time to cast the hounds again, and we all skid to a stop.

I hear horses crashing into low-hanging branches. "Bees!" somebody yells. I tried to figure out why nobody was running crazily away, but there wasn't time for that. We emerged into a bumpy field divided by a split-rail fence. Other riders snaked around it; Edam bobbled up and hopped over enthusiastically, and we were off again.

Minutes later, after a fast canter through a 90-degree turn, we were all forced to wait while the field tried and sometimes failed to urge their horses over a vertical assemblage of two by fours. This was the very fence that dislodged a weekend warrior a few days before, a handsome advertising executive whose hired thoroughbred swerved, leaving him to slide to the ground with his arms around a tree. The same guy came over the hill to a check, people told me, like the Charge of the Light Brigade.

Finally Edam gets a few free yards in front of him, takes the thing like he's in the Grand National, and then I have to pull him up with all my might because there's a pileup ahead. The domino effect is getting extreme as horses take the fences behind us faster and faster, and slide into the waiting mob like hockey pucks into the net. This is the same scenario I was in years ago, wherein a crowded horse delivered a pile-driving kick that would surely have killed the beast behind him had it not creamed its master instead.

The man who's leading my part of the field takes off at a canter up the road. We follow. We have to. I find a part of the verge that has grass on it and aim Edam's feet for whatever dirt is available, pulling him out onto the pavement to dodge beer bottles, praying no cars come. I'd never ride like this on a bet, but my boss is in front of me somewhere, and behind me is somebody -- I can't turn around to see who -- breathing down my neck. Back when the bible of fox hunting was written in 1849, W.S. Surtees inspired generations of cavalry officers by saying that fox hunting has "all the thrill of battle and only 25 percent of the injuries." A cartoon in Punch magazine around the same time declared, "It's not the 'unting that 'urts 'un, it's the 'ammer, 'ammer, 'ammer on the 'ard, 'igh road." Horses have an intricate assemblage of bones inside their hooves, and their tendons can be severely damaged by pounding. That's what was troubling me, and I cursed the authority of whoever it was that led us to this callousness, along with myself for wanting, as Courtney Love would have said, to go and join this stupid club. Running a good horse on the road is like defacing art. And I was doing it.

We turned into the woods. This time, when I heard the hounds give tongue, the huntsman's horn blew the series of choppy notes called "gone away," and we were off on a mad dash through a lovely tunnel-like wood until, yet again, it was time to stop. So we waited for the next signal, and then waited some more. The horses shifted their feet, jingled their curb chains, tried to browse available leaves. The hounds were drawing a blank. Down a slope to my right was a tumble of mossy boulders with a rivulet of clear water dropping into a tiny pool. The breeze picked up; leaves blew from a stand of white birch. My hips ached, my toes were paralyzed from being still. Edam's sweaty neck was almost dry. Then, wordlessly, we shuffled forward: The command was handed down that we were packing it in. A woman on a big chestnut horse pulled out a cell phone and dialed it. "This is important," she growled, shushing us. "You want to eat, don't you?"

Twenty minutes later, when we arrived back at where we started, the food detail had already arrived, with barley soup, giant aluminum trays of chicken and mega-bottles of picnic wine. People had removed their hats and jackets. I didn't recognize them; I'd just spent three hours looking at the backs of their heads. Chop and Edam just wanted to get home. I wondered if the little palomino's feet hurt. I know I could find another outfit I look good in. If only I could do that for him.