Tart and tangy, the wee Camponotus consobrinus gives me a lesson in world culture. 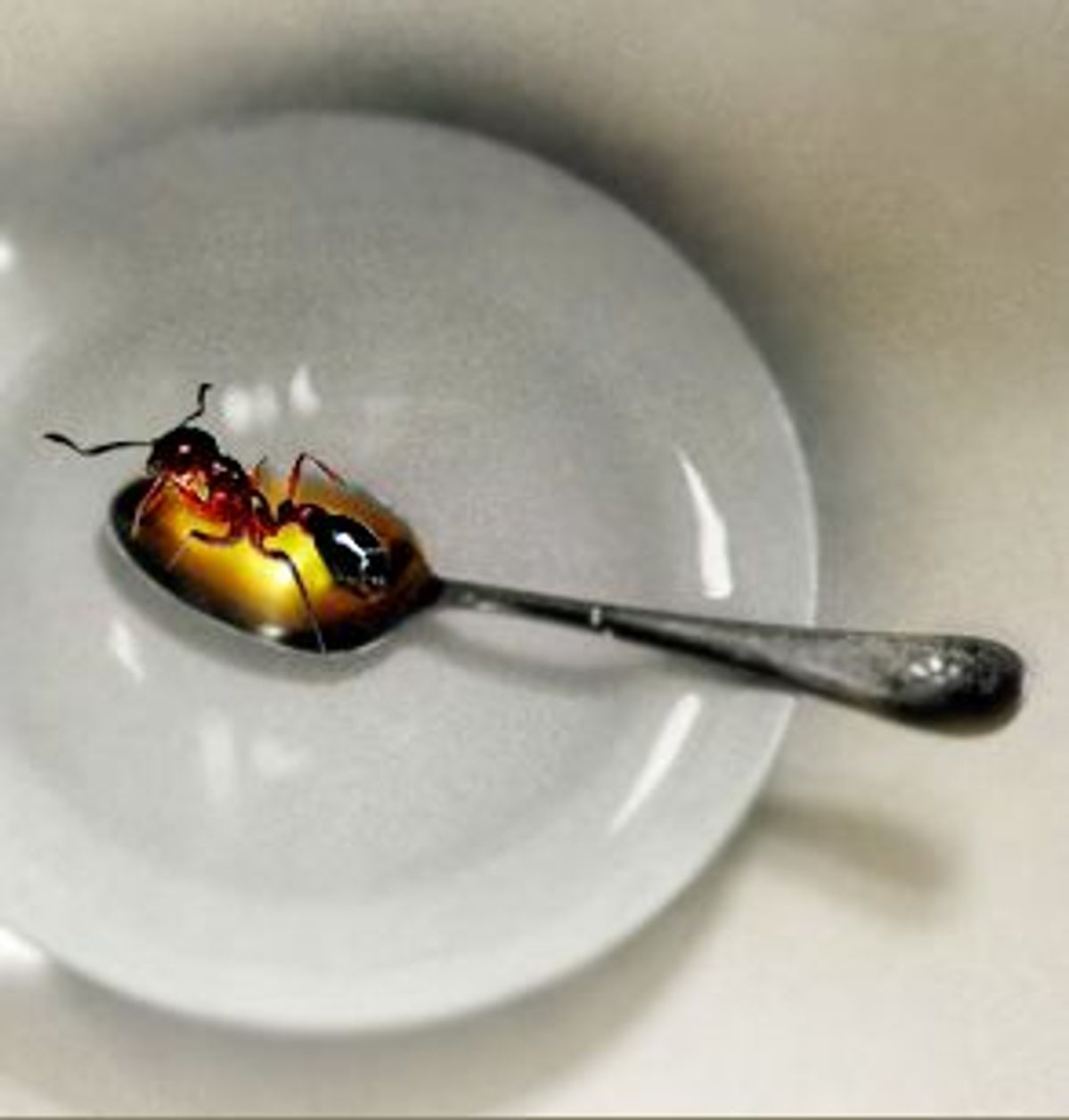 We rise before daybreak in our home, and my wife is off to work. We embrace, kiss and she drives away. The noise of the alarm, the chatter of doors and drawers give way to silence, to time to read, to think and to be alone in the predawn stillness. The world turns quiet, and I am free to start the day on my own terms.

I find a book and settle down to a simple breakfast of tea and dry cereal. I like best the neat little shredded wheat biscuits. I don't like milk, and so I dip handfuls from the box as I page my book.

Shredded wheat comes in a variety of forms. I prefer the plain, but last week I found only one box left in the cupboard, and that was a box of the type "with honey and almonds baked in." My wife has a sweet tooth.

That explains the ants, but it doesn't explain why I ate them.

Actually, it doesn't completely explain the ants. Spring and fall, our house suffers an invasion of sugar ants, tiny fellows perhaps an eighth of an inch long. My wife murmurs about the efficiency of pesticides. I refuse to listen. I'd rather put up with ants temporarily than spray chemicals indiscriminately.

And so it came to pass that I scooped out a handful of cereal "with honey and almonds baked in" and ate an indefinite number of ants. Admittedly, I was distracted by my book, and I didn't look carefully as I lifted the cereal into my mouth, and so my decision to add meat to my breakfast was accidental.

I had noticed earlier a parade of ants along the baseboard, and, since ants are hedonists and would head for dessert first, I knew my wife's cereal with "honey and almonds baked in" would be a likely destination. And, of course, the fact that I tasted something other than cereal, or even honey and almonds, was the final clue.

You could call the taste bitter, but you wouldn't be quite right. Add tangy, and you'd be closer. The flavor was sharp, woodsy, but it lacked texture. Of course you wouldn't expect texture. Ants are minuscule, after all. Certainly not big enough to crackle as you bite down on them.

I didn't gag or spit out the ant-and-cereal mixture. There is a sense of people-aren't-watching freedom at that time of morning. I find myself open to possibilities, willing to accept a different rhythm for the day to come.

I thrust my hand into the box, grabbed more cereal and carried it quickly to my mouth. There again, the taste. Tart, wild. Once more into the box, for something never before on my tongue.

I pushed back the lid and looked into the box. I could see dozens of tiny creatures rushing about in panic. I picked out a single piece of cereal and checked it carefully for signs of wildlife. Cereal, nothing but cereal, and so I ate it, slowly, savoring the sensation. And the taste was pure, sweet grain, with no perception of the raw, wild aftertaste lingering on the tongue.

I once was squeamish, nearly obsessive, about the cleanliness of what I ate. I have become less so over the years, but now I wondered if that trait had disappeared entirely.

Amused at myself, I thrust a finger into the box and watched as an ant jumped aboard. He was nearly black, tending toward maroon rather than sable, and his antennae moved constantly as he wandered down from my fingertip.

I have eaten a living, breathing creature, I thought, hair, hide and hindquarters. I turned my hand and looked directly at his microscopic head, rotating about in apparent confusion at being kidnapped from his tribe.

I once sat next to an evangelistic vegetarian at a holiday banquet. "I suppose, to put it simply," I said, "you won't eat anything that had a face." She was not amused.

I eat meat, but I was struck by the odd notion I had engaged in social cannibalism. Much like us, ants maintain a highly organized society, although a literate entomologist might suggest it is closer to a brave new world than a liberal democracy. The little buggers even fight wars.

"Good protein," my wife remarked later when I told her about my culinary adventure. This from a woman who claims the smell of cooking beef makes her gag.

Of course, she said something nearly identical while we watched a television documentary about spiders. A group of Amazonian aborigines prowled the jungle seeking food, and a hunter speared a tarantula the size of a dinner plate. He tossed it into an open fire, and his children waited eagerly for the beast to roast to perfection.

The oldest child used a small stone to split the spider's body. After he levered it open, his two sisters and a brother squatted on their haunches beside him and daintily fingered out the meat. The normalcy of it all paralleled a group of youngsters sharing fries at a fast food restaurant, right down to the multiple earrings.

Ants, spiders -- does size matter? I have eaten ants, but obviously I have only ventured to the edge of the jungle of exotic foods. Perhaps it is a matter of appearance. Compare a tarantula and an Alaskan king crab, both unlikely looking brutes, but one is subsistence for a Stone Age family and the other is a luxury in gourmet dining rooms.

I looked once more at the cereal box. Why do we eat what we eat? Culture, of course. A friend, a native of the Philippines, must have rice every day, every meal preferably. And dogs are a delicacy in the Far East.

On the other hand, I am a descendant of the malcontents and misfits who fled northern Europe, where the French ate snails, the Scots sheep's heads, and the Germans blood sausage. In that great migration to the New World, we came upon aboriginal peoples who were dog-eaters, but we didn't change. The best we could do, it appears, was to admit corn was edible.

Practically speaking, a dog is a quickly renewable source of meat protein. Does Benji sound more appetizing if we phrase it that way? Our cultural equivalent is a pig or a chicken, or, perhaps, a rabbit. But it's a big world out there, and every group has its table taboos. Hebrews and Muslims eat no swine. Hindus eat no beef. I eat no dogs. I suppose we could share a meal together, but we'd probably need to hire my vegetarian acquaintance as chef.

Of course, I shouldn't point fingers. Scholars who study this sort of thing protest that any aversion to another culture's dietary preferences means we are indulging in "ethnocentric assumptions about the food ladder hierarchy."

Apparently, while I wasn't looking, the intelligentsia has pushed us past comfort food to food as a measure of tolerance. I've traveled a bit, and I'm sophisticated enough to understand that food choices are cultural and environmental; but now word comes down from opinion-makers that food choices -- and our perceptions of other people's food choices -- are political. Of course, it has always been so in a Machiavellian sense. A good prince distributes the harvest wisely and prevents hoarding and suffers no riots in the streets. But princes are no more, and cultures are valued subjectively. We are told we wallow in elitist ethnocentricity if we declare that a Masai feast of cow's blood and milk descends to savagery. I suppose, if you consider it carefully, it's no better to eat cow lips, cheeks and other assorted scraps mashed into a gut tube and labeled bologna.

All things considered, I am willing to indulge my Grade A USDA-approved diet and retreat from ethnocentric culinary superiority, but I refuse to be sheepish about my aversion to certain foods. Call it habit. Call me a reluctant explorer. I will even admit to continuing to be judgmental about dietary practices. And, to be frank, I believe there's a measure of ethnocentric arrogance within the recipe for some cultural specialties.

Bird's nest soup, a sheep's head with eyeballs intact or blowfish so poisonous a chef must have a license to prepare it -- what is this but gastronomical hubris? Who decided the bird saliva binding twigs together in a swallow's nest is nourishing and tasty? Who ate the first sheep's eye? Why is blowfish popular in the Far East although hundreds of people die after consuming improperly prepared servings?

On the other hand, tripe, scrapple and pig's feet remind us of our wastefulness. I realize people began to eat intestines, brains and trotters from necessity. And while many people continue to eat assorted organs and extremities today, I sense no haughtiness when someone announces he cherishes chitlins.

Ants, tripe or a sheep's head -- I suppose given a choice of the three I would take the ants. I prefer simplicity. Age burns away passion and certainty. Age also consumes appetites. To me, food is fuel. Simple cereal is sufficient in the morning, beans and salsa midday and perhaps an egg, bread and cheese at night. Food is neither my religion nor my vice, and I have come to the point of my life where I have no quarrel with the gourmet, look with some puzzlement on the gourmand and pity the glutton.

I looked at the cereal box, and I smiled in admiration of the industrious Camponotus consobrinus. The sugar ant tribe had managed to discover the single open box of sweetened cereal in our house. I watched as they hustled through a small gap in the top flap. I will eat no more of them, I suppose. Three bites are sufficient. Now I'm left to think about what is and what isn't food, and about why I must claim accident rather than intention if I tell someone I ate ants for breakfast.

I will take the box outside later, scattering the tainted cereal beneath the great pin oak in our yard. The squirrels will not notice the ants, rejoicing only in the bounty among the leaves. Some of the less squeamish among us see the ants in the same light. Some go further, insisting nourishing protein is available in abundance not only from ants and spiders, but also from grasshoppers, termites, beetles, crickets and nearly every other thing that creeps and crawls. Cattle, sheep, goats, pigs, chickens demand land, energy and human stewardship. Insects breed like flies, take up minimal space and provide excellent food value.

I looked again at the ant-infested cereal box, ideas crawling along the edge of my subconscious. A breakfast of ants has carried my concept of food into unknown territory. I thought that I cared most that I eat nourishing food in minimal amounts, believing control of this appetite, like any other, reflects moral stability. But now I see that may not be enough. It seems every hamburger declares my contempt for the environment, illustrates my lack of regard for ethical choices and proclaims an unsupportable belief in an illusory cultural superiority.

I tried to explain all this to my wife. "Sounds like a heavy burden for a little ant," was all she had to say.