"All About the Benjamins" 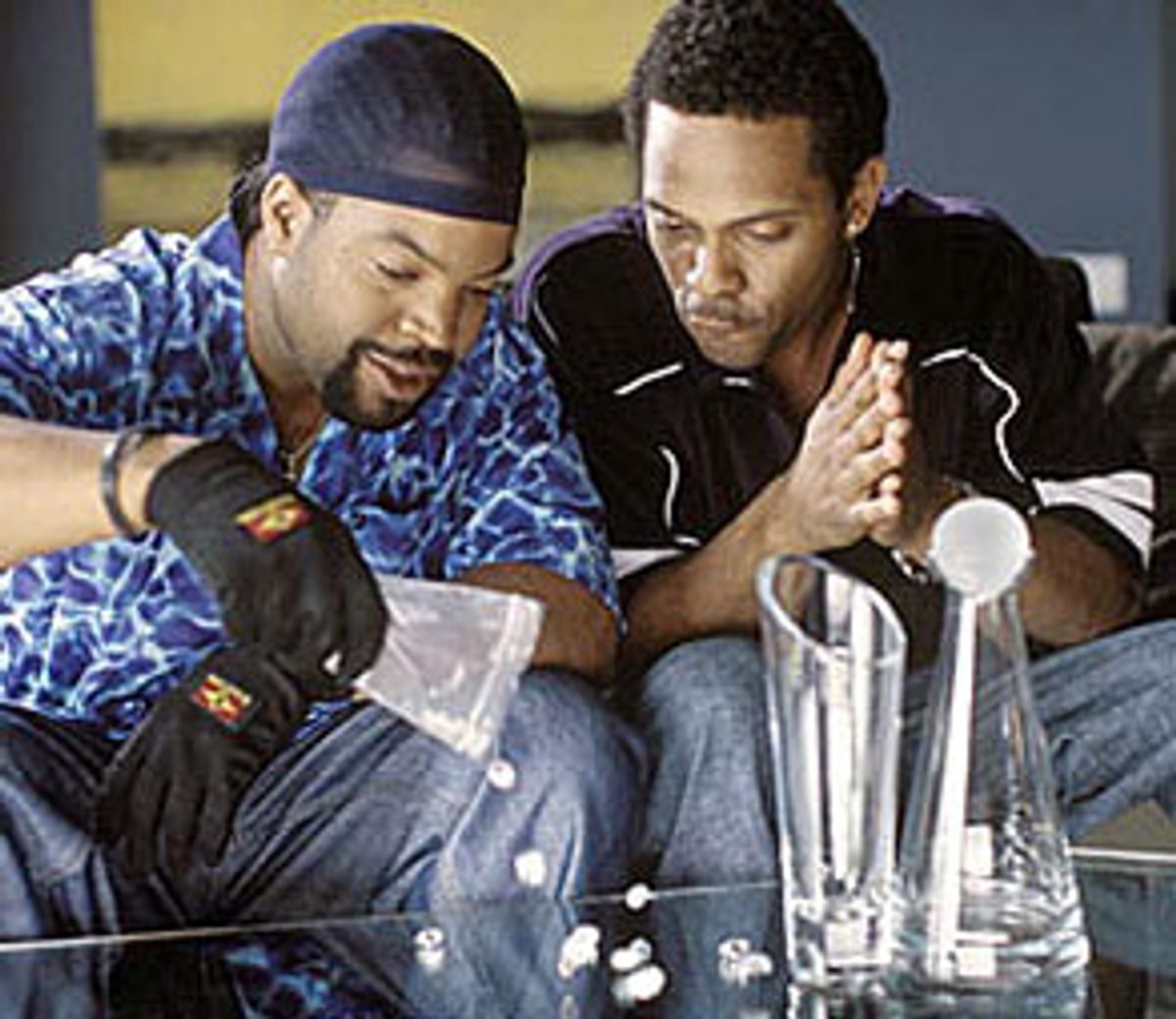 Even in the realm of pure, cheap entertainment -- a category that should never be undervalued -- there's no reason to settle for a half-assed action-comedy like "All About the Benjamins." "Benjamins" has exactly one thing going for it, and his name is Ice Cube. He co-wrote the script with Ronald Lang, and he's a genuine and likable presence in almost every scene. But he suffers from the story's lackadaisical, almost nonexistent pacing, as well as the ways in which first-time director Kevin Bray constantly loses control of the dialogue. (The spaces between the actors' lines often feel like strings of stretched-out elastic.) Everyone knows the movie business is about making money, but the most you can say about "All About the Benjamins" is that it's so audacious, it bores us all the way to the cash register.

The comedy is tepid, the action is dopey and even the violence is boring and occasionally cruel. Could you ask for less? We know we're in trouble from the opening scene, in which Anthony Michael Hall plays a cracker holed up in a trailer lavishly decorated with Confederate flags. (It's not like he's playing a stereotype or anything.) Ice Cube, as Bucem Jackson, a bounty hunter who's sick of the routine of his job, not to mention the low pay, bursts in on the scene and, after a scuffle, subdues Hall by deftly zapping his crotch with a stun gun. It may be the movie's subtlest moment.

Before long Bucem (pronounced "Book 'em") has hooked up with hapless and harmless petty criminal Reggie (Mike Epps), who has somehow landed himself in a pickle with a bunch of cutthroat diamond thieves led by toughie Scotsman Robert Williamson (Tommy Flanagan). Bucem wants to recover the stolen diamonds so he can reap recognition and start his own private-investigation business. Reggie is more interested in recovering a piece of property that the thieves have unwittingly made off with -- something that represents a small fortune to him and his girlfriend Gina (the reasonably appealing Eva Mendes).

Bucem and Reggie bicker and bond and shoot guns in all the predictable places. There's some run-of-the-mill car-chase stuff as well as a runaway-speedboat sequence. (The movie is set in Miami, although it captures so little of the city's vibe it could have been set almost anywhere.)

The two good guys do bad stuff to the bad guys, some of it so sadistic it isn't really fun. In one sequence, Gina repeatedly winces and averts her eyes as she watches Bucem and Reggie work over a baddie. You can't tell if that's supposed to be a joke or if it's Bray's way of halfheartedly acknowledging that this particular brand of violence is cheap and ugly. In a later scene, a woman character who's a minor villain is shot point-blank in the forehead by another bad guy; the moment has no weight or consequence, and while some of her male counterparts meet worse ends, this character's previous actions don't really match up with the punishment.

Bray cut his teeth doing commercials and music videos, and that isn't always the worst training ground for a movie director. But "All About the Benjamins" (for those who are Top 40-challenged, the "Benjamins" in the title is street slang for $100 bills) feels as if it were spit out of a machine. Bray likes to work in tight, swimming close-ups that grow wearisome almost immediately. And he's not quite sure how to guide his actors. Epps, who co-starred with Ice Cube in "Next Friday," has about one-third of a decent moment, when he sings out the lottery number he wants to play to a cranky convenience-store owner. But almost everywhere else his jokes feel forced and badly paced; one of his best ones involves his verbally comparing his penis size with the Scotsman's.

The picture's biggest sin is the way it wastes Ice Cube. Ice Cube has already proved himself a marvelous actor in pictures like "Trespass" and "Three Kings"; he's never really gotten the recognition he deserves, but he sure won't get it here. His Bucem has one interesting character tic (he adores exotic tropical fish), but even that ends up being just another device -- it's raised and dropped as if it were nothing more than an afterthought.

Ice Cube seems to be doing his best, but he can't rise above his surroundings. And the music used in the movie barely registers, either. "All About the Benjamins" is a story about two down-and-out guys who get into some deep trouble but somehow end up bettering their lot. It should be exhilarating and fun, and it should at least look like a million, instead of a Washington and some change. Its bling-bling sounds more like plink-plink.