Is anyone else besides me watching the sexiest thing on television? 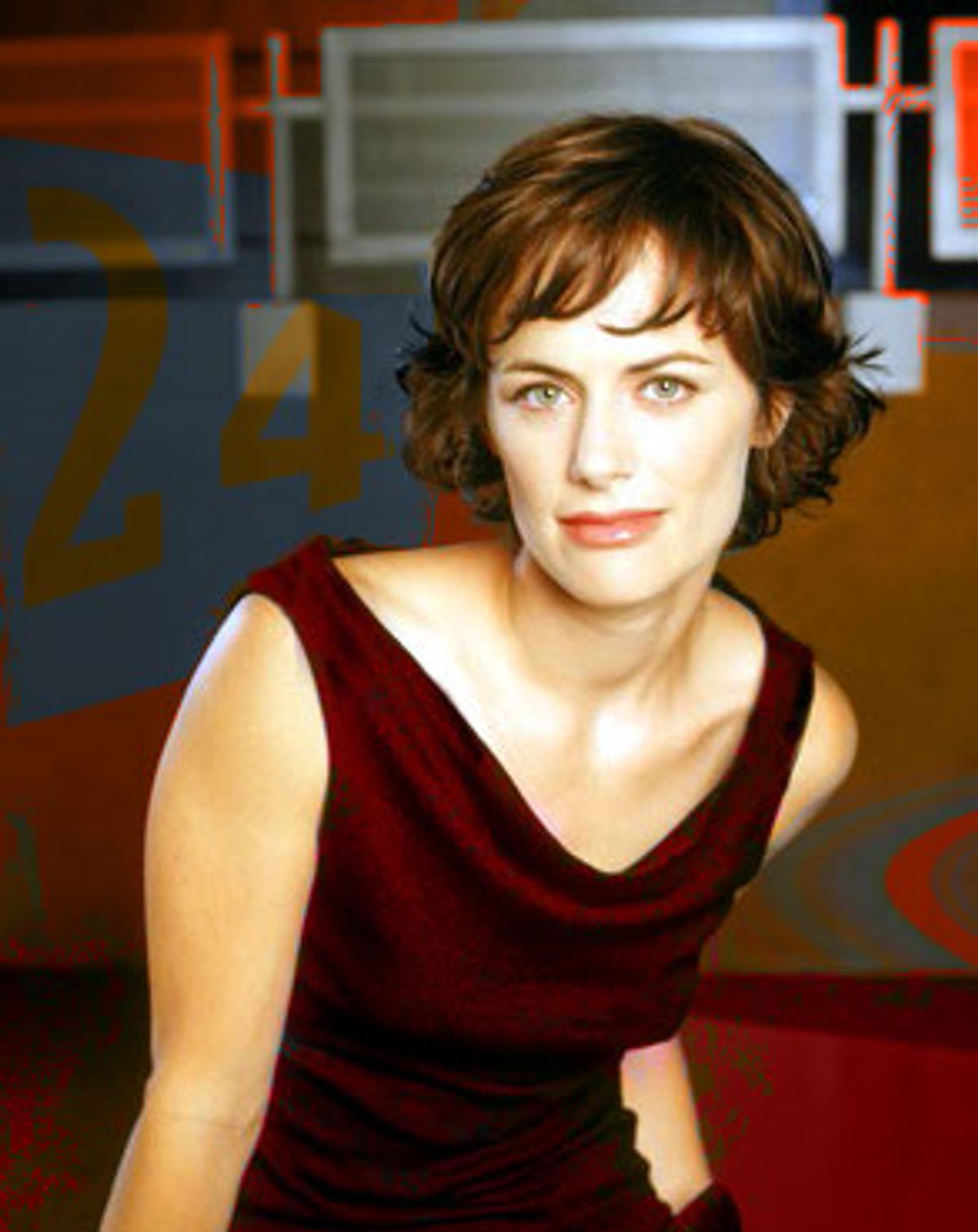 For all the promos that run on the Fox channel about "24," I still wonder whether I may be the only person watching it. The show has been bumped and pushed around, and it's not hard to believe that it's too complicated (or flat-out impossible) for a lot of viewers. Of course, it's part of the delicious, creeping paranoia that "24" induces that you are likely to feel alone. Sometimes I wonder if the show is pulling unfair tricks with the plotline -- but there's no one to complain to, because I'm the only one watching.

That's why I have this thing about Nina (Sarah Clarke). Because she seems to be desperately watching the whole thing unfold in just the mood I'm feeling.

Nina (for the rest of the world) is chief assistant to Jack Bauer (Kiefer Sutherland) in some kind of high-level security operation in which Jack is trying to prevent an assassination plot against a presidential candidate. Don't ask me to explain the plot any more fully because I can't. All I know is that I can't miss the show, and that Nina is the sexiest thing on television.

In the back story to "24," Nina has had an affair with Jack, but it's over now (I think), which has enabled Jack to be driven all over greater L.A. and halfway out of his mind to rescue his wife and his teenage daughter, who were kidnapped as part of the assassination plot. This has left Nina, back at headquarters, always in some kind of magical telephone hookup with Jack, trying to help, trying to hold the show together -- and, in an odd way, seeming like a kind of surrogate writer-director trying to puzzle it out.

Last night, with the wife and daughter rescued (for the moment at least, though there is something wrong with the wife that is probably more than her having been raped during the ordeal), a lot of characters were saying what a brick Nina had been, how much she had done to save everything and so on and so forth. All true.

Plus, because "24" is what it says it is -- continuous action, 24 hours in the life of these people -- Nina hasn't had a break, a catnap or time for a shower or a change of clothes. She's been in the same drab black outfit all along, and her makeup has gone very faint. It doesn't matter; Nina is a knockout still, and so beautiful and so intelligent-looking that you sort of know that she and Jack haven't gotten over that affair (no matter his fresh vows of duty to his family). And given the complete uncertainty that envelops "24," you can't abandon the thought that Nina could yet prove more than she seems.

And that's a big part of why I wonder about her.

You see, in last Tuesday night's episode, as Jack went into deep interrogation over his episodes on the lam, he asked Nina to take off and visit the hospital where his wife and daughter were being checked out. Not the kindest assignment, you might think, in view of the inevitable wariness between Nina and the wife. And Nina had a close-up where the thought bubble said, "Jesus!" but she went along with it all -- because she seems devoted to making the series work, because she does as she's told, because she can't say no to Jack or because she is more than she seems. Take your pick.

And, of course, when she gets to the hospital, Nina not only handles the awkwardness with the wife, but she is so brilliant an investigator (or so extreme a paranoid) that she picks up on another little line of sinisterness that seems to be developing. With the result that she takes command and orders the wife and the daughter out of the hospital -- to a safer place.

We are more than halfway through "24," and it's only natural that one begins to wonder where the whole show is going. Well, for what it's worth, it's really only Nina I care about. The presidential candidate leaves me cold. Kiefer Sutherland has won his Golden Globe already. But I have such a need to see Nina week after week that I'm getting very anxious, worrying that the show may let her down.

However, what do I want? What would I do if I were writing the show? Is the wife dying? If so, does that leave legitimate room for Nina and Jack? Or is Nina going to be the last death, giving herself for Jack in the final crisis? Those could work for me, but I'm not sure that I don't want to see a final scene where Nina -- showered, and brilliant in aqua and mauve -- is revealed as the brains behind the whole thing.