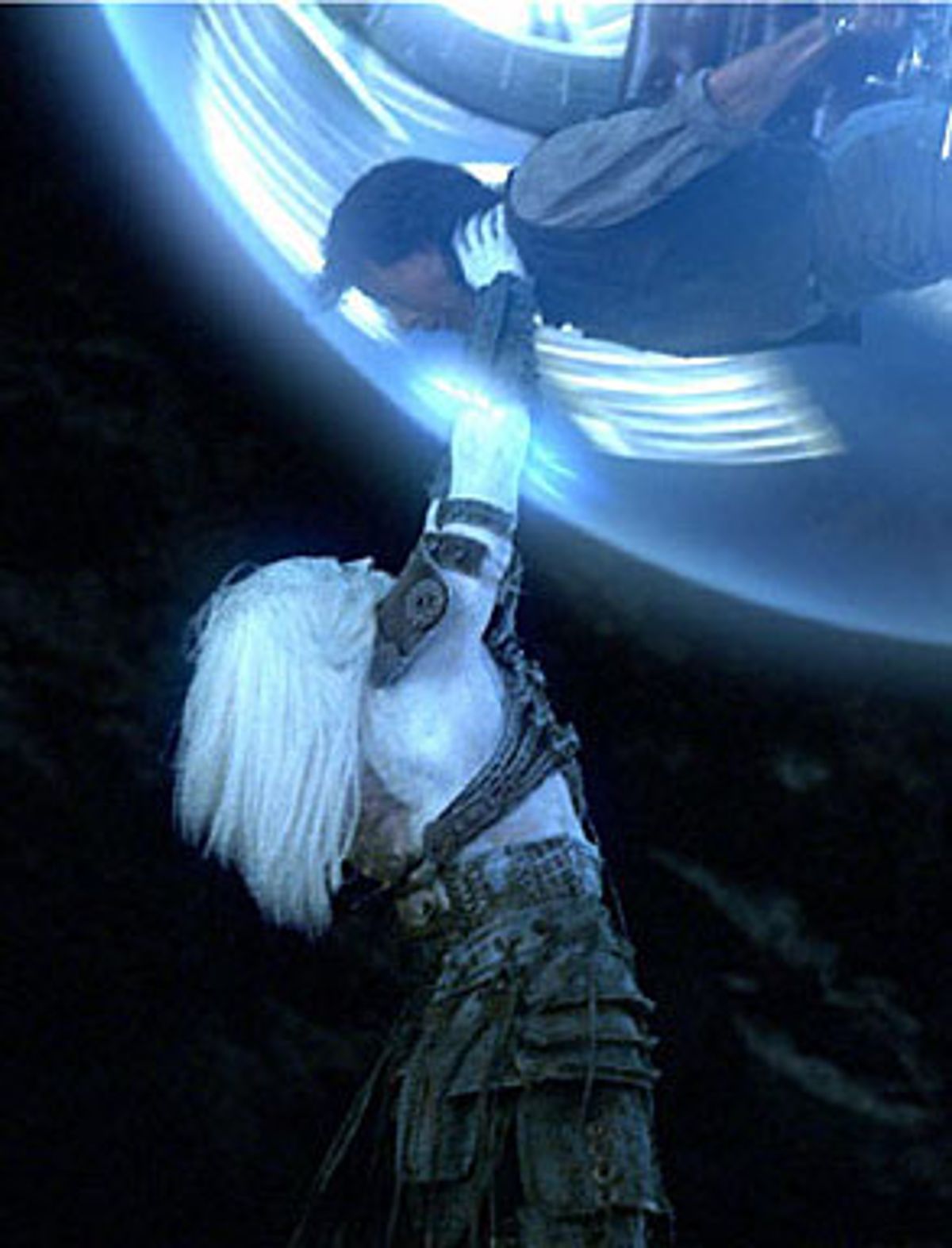 "The Time Machine" is, for the most part, a handsome, pleasant entertainment. Perhaps because the idea of time travel holds out the promise of traveling hither and yon, the movie bogs down when the hero (Guy Pearce) settles into a primitive future. (That was a problem in the 1960 version starring Rod Taylor, too.) But the director, Simon Wells, still manages to bring the picture in at around 90 minutes, and with the exception of a battle sequence and the chase climax, he doesn't go in for a lot of the jagged, incoherent cutting that reduces most contemporary action sequences to visual gibberish. He also comes up with one genuinely graceful visual effect: a scene where characters from two different time periods, turn-of-the-century New York and New York a million years in the future, stand side by side in their respective time dimensions, unaware of each other. We watch as a Manhattan brownstone gives way to a leafy junglescape.

What the movie lacks is the simple affection for its material, the classic sci-fi novel by H.G. Wells, that characterized the 1960 film directed by George Pal. That picture was a studio job, but you could still feel that Pal was motivated by his love for Wells' tale. (You could feel the same in the 1953 film of "The War of the Worlds" that Pal produced and Byron Haskin directed.) Most people in their 30s and 40s saw Pal's version as kids on TV, and when they talk about it, you can tell they still retain a special affection for it. It's easy to see why. The movie has a plummy, storybook feel, and the special effects are rendered with an almost elegant simplicity. When H.G. Wells (played by Rod Taylor) sits in his time machine, Pal depicts epochs whizzing by via shots of the sun arcing repeatedly across the sky, the changing dress styles on a store mannequin across the way and, gradually, Wells' London house falling away to make room for other buildings.

Simon Wells (who is actually a descendant of H.G.) borrows some of Pal's effects, and they're not bad. As Pearce's Alexander Hartdegen ventures further and further into the future, we see flowers blooming and withering across the skylights of his laboratory, and finally, the very landscape around him changing; widespread destruction giving way to a second Ice Age, land masses forming and receding, vegetation returning to the planet. It's a clever, effective means of depicting the unimaginable future life of the planet.

But though the effects are far more complex than anything Pal could achieve, they aren't nearly as impressive. Perhaps this is because, with all the technology available to filmmakers today, you don't have to have any particular talent to amaze us. It's easy to show the earth slipping into a second ice age when you've got computer graphics and matte artists and millions of studio dollars at your disposal. ("The Time Machine" was a co-venture of Dreamworks and Warner Bros.) Sometimes, watching the new generation of special effects, what I see looks so real that it feels fake. Less technically sophisticated effects from films of the past often retain their capacity to invoke wonder, working at a simple, almost symbolic, level that can tap into real suggestive power.

I'll say this for Simon Wells: He's not so in love with his effects that he lets them stop the movie dead. "The Time Machine" benefits from the charm of its conceit, and the sets and backgrounds of turn-of-the-century New York have that pleasing old-movie feel -- the sort that doesn't let you believe in what you're watching for a minute; what you respond to is the fact that all this has been made up to entertain you -- but it lacks any poetry of its own. And the movie doesn't wear you out with the pell-mell pacing that makes so many Hollywood pictures feel exhausting after 10 minutes; instead, it's a little sluggish.

John Logan's screenplay, based on the one David Duncan wrote for Pal's film, makes a few nice additions. Alexander's motivation for exploring travel in time works just fine, at least until the script adds one twist that makes you feel tricked for responding in the first place. Logan does better when Alexander winds up nearly a million years into the future, where the human race has split in two: the peaceful Eloi who live aboveground and the cannibalistic Morlocks shunning the light of day in underground caves.

In Pal's film the Eloi were blue-eyed, blond emotional zombies (like teenage versions of the kids in "The Village of the Damned"). These Eloi, a multiracial bunch featuring the pop singer Samantha Mumba (not much of an actress, but a lithe, attractive camera subject), at least have the emotional resources to know they're in danger from the Morlocks. The Morlocks themselves look like deformed, overgrown gnomes, but they are such CGI creations that they're never as scary as they should be. They have, however, acquired one neat new trick: the ability to rise out of the sand and slip back down into their cave world in the same way, their victims slung over the shoulder.

The best thing about this future world is that it's a lush movie jungle, set atop huge cliffs. The Elois' dwellings are especially nifty -- a community of treehouses hugging the cliffside. (It looks like a Tarzan and Jane version of Club Med.) There's also one nice addition to the Eloi world -- a hologram figure (played by the enormous-eyed comic Orlando Jones) left over from the New York Public Library, a repository of the information of civilizations past. There's a nice moment when the Eloi gather to hear Jones recite "Tom Sawyer" to them, but there's also one I could live without: Jeremy Irons, camping it up (though not enough) as the brain behind the Morlocks. In his tattered bondage gear, death-white skin and straight white hair, he looks like the retirement-home version of Marilyn Manson.

The biggest problem with "The Time Machine" is the dead weight at the center, namely Guy Pearce. Watching Pearce prance and hiss his way through the recent "The Count of Monte Cristo," I couldn't figure out why he chose to play a character who is supposed to be a lecherous, villainous blackguard in the effete, finicky, crypto-gay manner of old-movie baddies. Maybe he always dreamed of being Clifton Webb? Here, he wears a slugged look that's simultaneously simian-slow and voracious (he's all teeth and chin). Yes, he's supposed to be an absent-minded professor unaware of his unkempt appearance, but did he really have to have such pasty skin and lank, greasy hair? Whose idea of a scientist-hero is this, Charles Bukowski's?

There's no romance or fire or wit in Pearce's Alexander, just a mopey, gobsmacked expression that doesn't exactly inspire the confidence the Eloi -- or the audience -- need to feel in him. When he does something clever to outsmart Irons' Morlock pooh-bah, would it have been too much to ask for a trace of bloodthirsty joy from Pearce? The hero of "The Time Machine" needs to have the grace and precision and charm of an antique pocket watch. Pearce is like that Swatch you bought on a whim and forgot about a month later.

It's not much praise to say that "The Time Machine" is the sort of diversion that's better than you expect it to be. But we're almost a quarter of the way through a year that so far has offered no genuinely entertaining mainstream movies. Kids (say, aged 8 or 9 and up) might even respond to "The Time Machine" the way their parents did to Pal's version. I just wish it gave them a little more of the craftsman's pride and care that the earlier movie gave us.