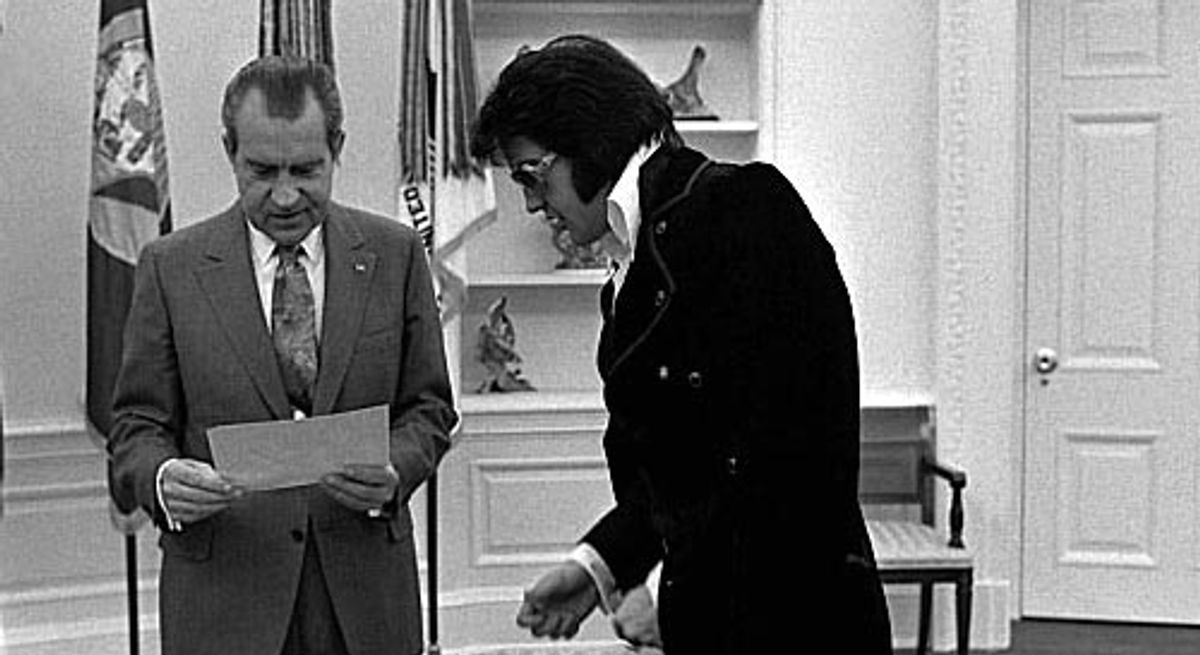 Yes, it was all about her reputation: "Amy Fisher is out and Paula Jones is in as Tonya Harding's 'Celebrity Boxing' opponent, Fox announced Saturday ... Jones, who lives in Cabot, Arkansas, told the Arkansas Democrat-Gazette she's not concerned about the notorious skater. Her only fear: the safety of her new nose job."

This fiercely unpretentious record features Christopher Wool-style lettering, an epigraph from Susan Sontag ("The only interesting answers are those which destroy the questions"), abstract art by Neale Howells and a host of expertly produced songs that allow you to imagine what the Beatles might be doing if they were still together and hadn't lost their edge. (If the singer on "Miss Europa Disco Dancer" isn't Paul McCartney -- McCartney today, in his ragged rockabilly clothes -- he could be.) But the music reaches its height with "Epicentre," an unbreakably stirring piece of 1970s-style guitar rock that calls back such dead heroes as Paul Kossoff of Free and Rory Gallagher of Taste. One chord after another, the song climbs its own steps, a leap from the top of the tower preordained. "Feels like/ There's/ No escape," James Dean Bradfield says in a harsh cadence, breaking up his line like Wool breaks up words. "Except through/ Our hate."

No album ever has to sound better, but God help us if any album ever sounds more under pressure. With "This Year's Girl," "The Beat," "Hand in Hand" and "Lipstick Vogue," both the singer and the band are so swept up in the cruelty of the music it's hard to credit the multitude of choices shuddering out of every note, word or riff -- what can come across as pure emotion can also communicate as craft. What feels like spew one day will feel like someone biting his tongue the next. No wonder that "Radio, Radio" and "Night Rally," both burning on their own terms, feel contrived by comparison; next to numbers that can scare you because they cut the ground out from under your feet, they're just protest songs. In sum, a world-historical statement -- plus, as with all the new double-CD Costello reissues on Rhino, an extra disc of junk.

Big, chiming guitars are one of the corniest devices in rock 'n' roll, but sometimes there's no better way to say that no matter how bad the story you're telling, you're coming out of it like Timi Yuro with "What's a Matter Baby (Is It Hurting You)"-- as pure vengeance. That's the feeling the fiddler from Whiskeytown gets on "Thick Wall Down," despite the fact that her words tell a story about how bad turns into good. It's one more proof that the refugees from the never-so-hot band are better off on their own -- Ryan Adams with glory-rock success, Cary, unafraid to sound too much like Sarah McLachlan, with tunes that might stick.

The only highlight, from a very diminished Jon Stewart: "In Afghanistan, they were ruled by a totalitarian regime for five years, and when Afghanistan was liberated, the first thing that happened was that music was played on the streets there. (Applause from the hall, but somberly; this is a tribute.) And three days later even they were sick of Creed." (Rumbles of protest from at least a few in the seats: That wasn't very nice, especially after Stewart had set them up to act patriotic.)

Since Bush assumed the presidency, the one-time gadfly has become an administration cheerleader and his audience a gang of chanting dittoheads (this night people laughed mockingly over attorney Gloria Allred's assertion that the Supreme Court decision that made Bush president was "wrong," as if to say, "That's just so 2000, you cunt"). There's still room for good writing, though Miller has trimmed his famous blind references with I.D.s, perhaps because he thinks his new crowd might be a bit slow on the uptake. "We're not living in a police state," he said during his rant. "The only people longing for 1984 are the original members of the band Whitesnake" -- and it's that "the band" that bleeds the line dry.

As it begins to emerge that presidential candidate Sen. David Palmer (Dennis Haysbert) is being run by forces unknown to him, his wife, Sherry Palmer (Penny Johnson Jerald), tries to keep him focused -- by insisting that Palmer's asking who he's actually working for can wait until after the California primary. "We're almost there," she says reassuringly -- and more like Angela Lansbury in "The Manchurian Candidate" every week. The premise of this show from its first episode was that you can't trust anyone; you, the viewer, really can't. It's stunning that the level of tension hasn't simply been sustained over three months, but deepened.

8) Daniel Wolff, co-author of "You Send Me: The Life & Times of Sam Cooke" and editor of Ernest C. Withers' "The Memphis Blues Again," considers a White House photograph officially titled "The President and Presley Examine Documents," and initiates a caption contest. The results so far:

Wolff: "So, if I read this correctly, you're saying that if I can dream of a better land, where all good people stand hand in hand, then why can't that dream come true?"

Anonymous staffer at the Clinton Presidential Library, Little Rock, Ark.: "I'm sorry, Mr. Presley, but what you're asking is just not feasible."

9) Low and Dirty Three, "In the Fishtank" (Konkurrent)

Premise: The Dutch label "invites bands to whom they are strongly related" -- in this case the Duluth crawlers and the Australian instrumental trio led by Warren Ellis' violin -- "to record while touring Holland." So every number, including what might be the first version of Neil Young's "Down by the River" cut by a woman, Low's Mimi Parker, seems 10 minutes long, and not too long. Drifting in and out of "When I Called Upon Your Seed," Parker turns the music into a church; it's as unnerving, and as lacking in doubt, as the scratch of Ellis' fiddle in "Cody." You can almost hear the water freeze -- the canals in Amsterdam, Lake Superior, the Bass Strait.

Trying to nail a company that sells personal information taken off anyone's computer, Elisabeth Rvhm's young assistant D.A. Serena Southerlyn does a little research on her boss, Sam Waterston's crusty Jack McCoy, just to see how hard it might be. "You listen to a lot of Beatles and fusion jazz," she says, confirming the clichés of the character. "And you have what I can only describe as a very weird obsession with the Clash."

Correction: In a Feb. 11 item about Jim Roll's "Inhabiting the Ball," I wrote that, regarding the performance of "Handsome Daniel," with lyrics by novelist Denis Johnson, that Johnson "could put more into this song than the person who's singing it now." The verses were in fact sung by Roll, his guitarist and his drummer.