The tourists that ate Florida

Before Sept. 11, residents loved to gripe at the out-of-state visitors clogging Orlando. But then they were gone. 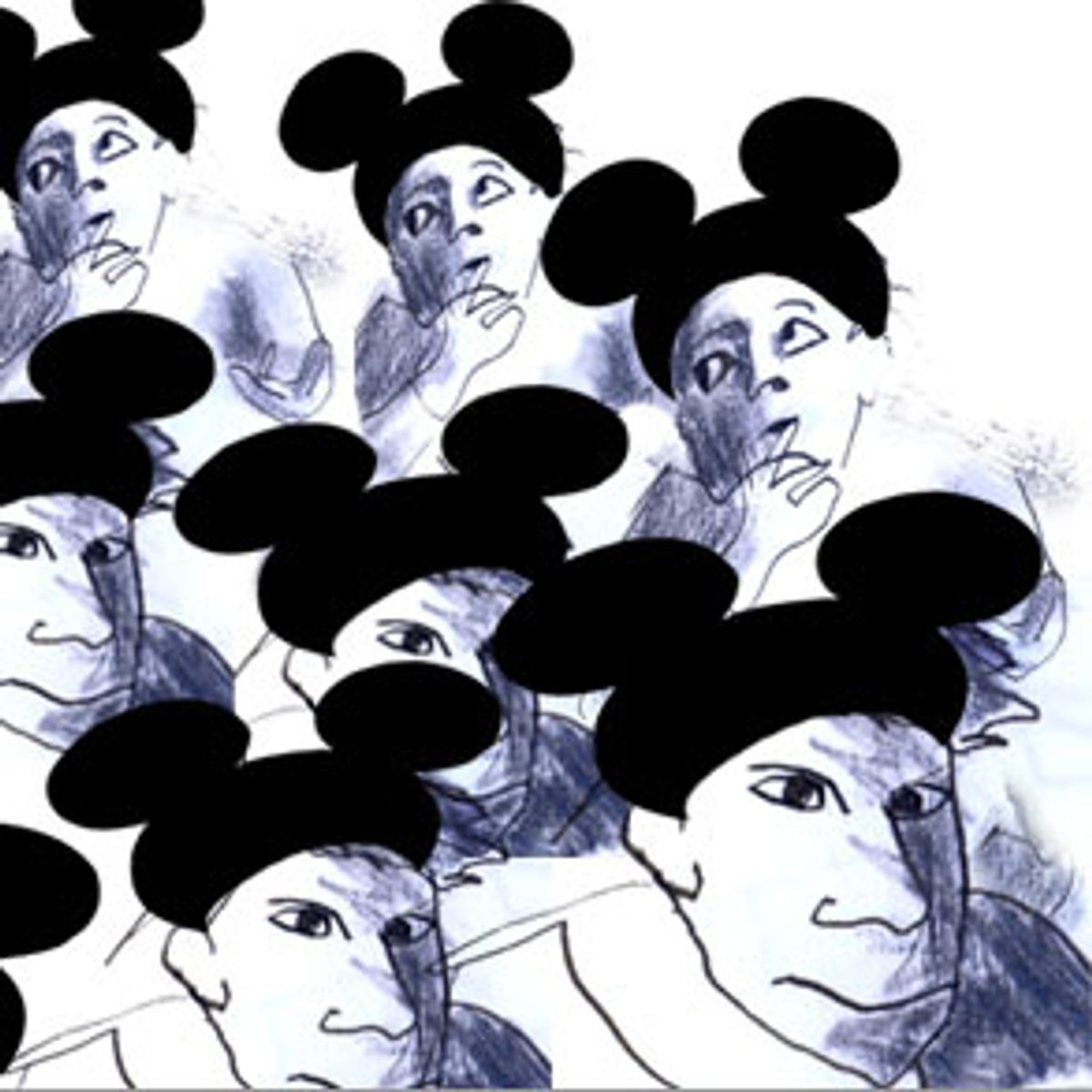 At Orlando International Airport, a billboard featuring a new ride at Sea World stares down over the baggage claim. Tourists packed six in a roller-coaster car, holding their hands up to their faces, look terrified as three fire-breathing dragons prepare to incinerate them.

I grabbed the last, lone piece of luggage on the belt, mine, wended my way to long-term parking, and hit the queue for Interstate 4, a relaxing 30-mile drive, which takes only three and a half hours when the traffic is good. Inching along, I had plenty of time to study the billboards. Here is what I saw:

An ape crushing another roller coaster car of tourists.

A water-park advertisement featuring a bug-eyed tourist being sucked down a drain.

A hideous gnarled depiction of ET beckoning motorists with his abnormally long, glowing and alien forefinger.

There was more, in the form of "attractions," including menacing dinosaurs, impending natural disasters, and towers with slipshod elevator equipment. I used to dismiss the billboard ads as theme park folderol, designed to lure tourist dollars out of their khaki pockets and into the sleek leather wallets of hotel, restaurant and recreation magnates. Now I saw the ads for what they were: subliminal expressions of Central Floridian animosity toward the tourist industry. On second thought, they're not even that subliminal. I mean, in one, a dinosaur is about to bite off a tourist's head.

Today, the U.S. Department of Commerce ranks Orlando as the third favorite vacation city in the nation. In the past 30 years, over 1.2 billion tourists stampeded through Central Florida and most of them headed for the theme parks. These guests provide such huge tax benefits when they buy airline tickets and hotel rooms that Florida can get by without a state income tax. On the other hand, only a minuscule amount of those tax dollars are spent on Central Florida counties. Which may offer one reason why we want to see all those tourists fricasseed by dragons.

But after Sept. 11, the wretched tourists dumped us just like that. They weren't afraid of the Terminator at Universal Studios, but they were afraid to fly. They weren't afraid of dropping 30 stories on Tower of Terror at MGM, but they were afraid of Osama bin Laden dropping bombs at Disney World, Church Street Station and the outlet malls. Hotel reservations took a 77 percent dive. Unemployment in the Orlando metropolitan area climbed to 5.1 percent. Profits plummeted, which led to shorter operating hours. State lawmakers called two special sessions to address a $1.3 billion decline in state revenue caused by the shortage of tourists.

We hate tourists when they're here, but we hate them even more when they aren't.

George Carlin quips that most people with low self-esteem have earned it. Apply that premise to an entire midsection of a state and you have all six counties in a nutshell: Osceola, Volusia, Seminole, Orange and Lake. We're talking about former cow pastures dotted with swamps and populated with people who didn't give a damn about the dirt roads because they had nowhere to go. We're talking about the proverbial country cousin with mauve melanoma dots around the neck.

Then we were transformed by slick, city developers with long, low cars and bags of moolah: not into Cinderella, but more like one of her stepsisters with lots of plastic surgery. Plenty of smooth, stinky asphalt in place of dust, mud and toe-stubbers. The roiling ash of pollution in place of the sickening bouquet of orange blossoms. A grown man wearing a Mickey Mouse headset instead of a donkey with his ears sticking out of a straw hat. The compressed years of meandering sameness, of livestock and impenetrable woodland exploded into a hurricane of shopping malls and theme parks populated by sightseers; junk-food gobbling, gawking, bumbling sightseers.

In those days, anyone could purchase 2,400 acres of wetlands and a concrete-block house for less than $10,000; exactly what the Disney Corporation did. Uncle Walt, the godfather, dug canals, drained the wetlands, killed off the wildlife he portrayed so fetchingly in animation, felled trees and poured a thick layer of concrete over everything. The sturdy house was transformed into a faux castle, and the swamp turned into an advertising bonanza, which is basically a big parking lot and an overpriced shopping center called Disney World. Universal, SeaWorld, Wet 'n Wild, Animal Kingdom, Epcot and MGM soon followed.

We pretend that we like tourists, but we do not. It's not because of the loss of our natural resources, which, let's face it, consisted mainly of ticks and deer flies, which tourists do a good job of imitating anyway. No, it's more of an erstwhile caste system. Native Floridians regard tourists in much the same way that the French regard Americans. We peer over our shades at hordes of geeky, freckled Midwesterners and Northerners who say warsh when they mean wash and sofer when they mean sofa, and who mill around International Drive, focusing expensive cameras with the wrong aperture settings on the lopsided Ripley's Believe It or Not.

And even if we don't have to pay an income tax because of all those tourists, here at the center, in Orange County, where most of the theme parks are located, we still don't benefit as much as we should from all those dollars funneled into Space Mountain. Orange County is known as a sponsor county -- the tax benefits are applied throughout the state. According to the Orlando Sentinel, Florida gets 10 percent of all the sales taxes it collects in the entire state just from Orange County. But when the state divvied up a $730 million profit last year, Orange and its cities received less than 5 percent.

A measly 5 percent, and even that is mostly spent on airport runways, roads and ramps leading into and out of the theme parks, and construction of new hotels and convention centers and sports arenas -- most of which are aimed at bringing even more tourists in. Worse, the Legislature routinely increases sales taxes and gas taxes, which the residents pay for along with the tourists. Residents also pay for the extra police protection and city cleanup crews for gala puke fests such as Spring Break and Bike Week in Daytona Beach.

To be fair, almost everyone who lives in Orlando, all 1.5 million citizens, is or was a tourist at one time. In the 1960s, the population barely scraped 60,000. Although there are few natives other than the Miccosukee Indians and the 585 babies born in the Sunshine State every single day, 660 people move to Florida daily. Most of them are ex-tourists. In spite of Florida's reputation as Geezerville, the median age in Orlando is 35.9: prime child-rearing years.

Given the circumstances, you'd think some of those tourist tax dollars would be earmarked for education, especially since our governor and his brother spend so much time reading in Florida schools and getting the elementary kids to help them sound out words. Yet our schools suck. According to the Florida Department of Education, more than 30 percent of fourth-graders failed the reading portion of the Florida Comprehensive Assessment Test last year. Florida is ranked third-lowest academically in the nation and only 65 percent of high school students graduate.

You'd think some of those tax dollars would also be earmarked for public transportation, since traffic in Orlando is basically a blocked asphalt artery and each visiting family adds more strain to the violent lurch of transport. Yet local government already shot down the idea of a bullet train between Orlando and Miami. Next they're about to aim at the proposal to hitch up Orlando and Tampa.

Yet, in Orlando, we pretend we consider tourism as progress, since our past claims to fame -- picking oranges, the space program and designing nuclear warheads -- pretty much went bust thanks to citrus canker, the Challenger, and the collapse of the Soviet Union. Tourism is our one and only lifeline. We pretend that the traffic, the pollution, and the gas prices are a small price to pay for the privilege of earning minimum wage at a swank attraction. We pretend that it's OK for Michael Eisner to reap huge bonuses from Disney World without having a main residence with a phone number in a 407 area code.

The truth is, we have never recovered our dignity after becoming pimps for cartoon mice, extinct prehistoric monsters and sci-fi aliens. But we're not finished yet; Lockheed recently landed the Joint Strike Fighter, although it's intended to fight terrorism, not tourism. And the tourists are coming back. Recently, Orlando started a softer, kinder advertising approach featuring a lovable "park hopper" who looks a little like a yellow Gumby. But it may backfire. Aside from Osama bin Laden, tourists obviously like to be scared; the evidence adds up along the perimeter of I-4.

You could argue that none of the theme park stuff is real, which means that the tourists are smart enough to stay away from genuine risk. I beg to differ. Miami is the fourth-favorite vacation spot in the nation and they've got something scarier than terrorism, the recession or snotty attitudes.

Elizabeth Randall is a freelance writer who lives in Orlando.