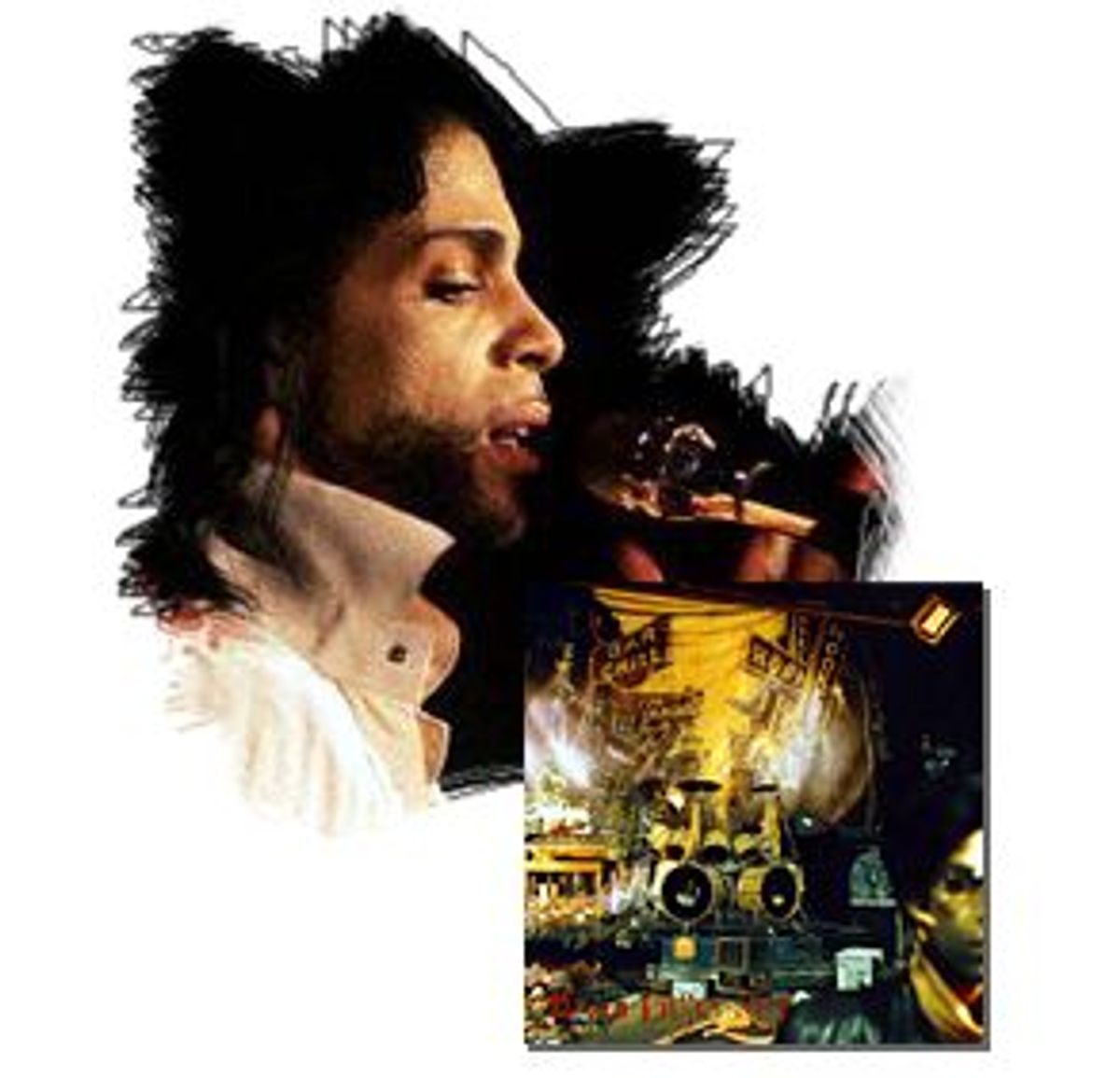 Little in the world of music is more self-indulgent than the double album. To create one implies an artist has twice as much to say as the majority of performers, what they have to say must be said right then and there and little of it can be understood outside the context of a massive amount of other material. Most double albums -- at least the great ones -- are bound by nothing except their own far-reaching scopes. The subject matter, range of musical styles and grooves on the LP seem to fit together only because nearly everything else under the sun is there too. Such examples aren't hard to think of -- "The Beatles" (aka the White Album), "Exile on Main Street," "Songs in the Key of Life" (perhaps the most thematically consistent double album of them all).

And then came Prince, as grand and in love with his own talent as any performer in memory. His first double album, "1999," was a smashing success, a cultural landmark that showed how genius could turn vulgarity into erotica, weirdness into eccentricity, and synthesizers into orchestral weapons. Most striking is the fact that as brilliant as that album was, its most significant achievement was that it laid the groundwork for "Purple Rain." (Songs on that later album such as "I Would Die 4 U" and "Computer Blue" are simply refinements of the styles introduced on "1999.")

In typical purple fashion, the little man sped past us and made two albums for which the world was not fully prepared: "Around the World in a Day" and "Parade." Maybe, if he'd chosen to take us around the world in a week instead of a day, the dizzying psychedelic follow-up to "Purple Rain" could have been digested more easily. And maybe, if "Under the Cherry Moon" hadn't been such a bad movie, the world could have appreciated "Parade" beyond the hit song "Kiss." But when he gave the world time to breathe and catch up, there was a glorious reward for our hard work.

That reward was 1987's "Sign O' the Times," the last great double LP and Prince's artistic peak. Sure, "1999" and "Purple Rain" were pop-culture milestones that introduced the masses to the Wonderful World that was Minneapolis and started their own respective crazes, but "Sign O' the Times" was Jamie Starr at his creative and technical best. With this masterwork, Prince combined the styles that had confused casual listeners on "Around the World in a Day" and "Parade," bringing both works together in one deep but totally navigable sea of brilliance.

Many Prince-o-philes recognize "Sign O' the Times" as the beginning of the end for popular acceptance of his music, but to say that is to see the glass half-empty. "Sign O' the Times" was one of those albums that made people realize how much potential music had in the dreary artistic landscape of the '80s; all the more amazing was the fact that it was all written, performed and recorded by one man.

After three albums with his band, the Revolution, "Sign O' the Times" brought Prince back to the one-man shows that made him famous, but it was much different, in scheme and concept, from "Dirty Mind" and "1999." It was originally titled "The Crystal Ball," a title that would resurface on a collection of outtakes released a decade later, but no psychic could have predicted what was on this album. It has nothing as shocking as "Sister," as vulgar as "Jack U Off" or as explicit as "Head." This was a more mature and refined Prince than the one most had grown accustomed to. Those early albums had no songs as brilliantly crafted as "The Ballad of Dorothy Parker," as soulful as "Adore" or as intelligent as "If I Was Your Girlfriend."

The latter stumped the world with a question that may never be answerable: "If I was your one and only friend, would you run to me if somebody hurt you, even if that somebody was me?" To this day, I still can't tell you. I can see the psychosexual genius of the lyric, a juxtaposition of the roles of friend and lover (commonly misunderstood as homosexual) that comes to an electrifying crescendo that demonstrates the lyric "We don't need to make love to have an orgasm." Apparently not.

For every element of brilliance that jumps in the listener's face -- the unreal guitar solo and bridge on "I Could Never Take the Place of Your Man" or the undeniable groove of "Housequake" -- there were dozens of wrinkles to be discovered with each additional spin of the record. To listen to "Forever in My Life" numerous times is to become fascinated with the staggering of the second verse, a vocal arrangement that cements the emotion in its lovestruck lyrics in reiterative fashion. In spite of its poppy beat, the love/hate vibe on "Strange Relationship" is so vividly disturbing that it begs closer attention. And though little thought is necessary to explicate "Starfish and Coffee," listening to the transition into and out of that song makes you reflect how mind-blowing it is that what sounds like a White Album leftover fits so snugly in the middle of Prince's '80s oeuvre.

Indeed, this album is something of an '80s retrospective, all on its own. The sonic landscape drips of big hair: Synthesizers and drum machines are the primary vehicles on many of the songs. Careful observation shows, however, that the album is as much a time machine as anything else. "Adore," Prince's greatest love song, is reminiscent of the soul records His Badness was into while recording the album. What better describes love than hyperbolic exaggerations ("If God one day struck me blind, your beauty I'd still see") tempered with realistic limits ("You could burn up my clothes, smash up my ride -- well, maybe not the ride")? The power chords of "The Cross" were neither like hair bands or the speed metal of the '80s, nor were they reminders of the decade that passed before. This was more a precursor to Pearl Jam than an echo of Poison, with a Christian message that Creed keeps trying to get right. "Slow Love" goes both ways in the time continuum, its jazzy vibe going back decades from 1987 but leaping forward into the neoclassical soul that so many artists hope to achieve now.

But in case anyone listening in 1987 forgot what time it was, the title track says it all in so many ways. With lyrics pulled straight from the headlines, it gave listeners their first glimpse into the political psyche of Prince. There were elements of commentary on previous albums ("Free" from "1999," "Annie Christian" from "Controversy" and a few others), but nothing in his previous seven albums had been as directly political and sharply insightful as the song "Sign O' the Times." In less than four minutes, he tackles gangs, crack, NASA, AIDS, child murder and heroin, leaving two minutes for an instrumental exhibition. But in that initial four minutes came a demand for change, a demand for a revolution in the kind of concern that we have for each other and ourselves. Simultaneously, he flipped music upside down with that and 15 other brilliant tracks.

Like any double album worth the name, "Sign O' the Times" sprawls all over the place, leaving little territory uncovered and proving who was the preeminent artistic force of pop music in the '80s. For the first time since "Purple Rain," Prince gave listeners just as much as they could handle, nothing more and nothing less. What resulted was his last hurrah of sorts and a void now 15 years in the making: a hole created by the fact that there has been no similar album from anyone since. No artist has been ambitious or successful enough to hit every mark in the course of two discs since "Sign O' the Times." Many came close -- 2Pac's "All Eyez on Me," most notably -- but none could cover so much ground without spreading themselves a little too thinly.

Perhaps the one identifiable weakness of the album is what makes it so damn special: the title. Sign O' what times? The relevance of the subject matter, even on the songs that are not about the ageless topics of love and sex, has not waned. Little of the music sounds dated. Perhaps the ambiguity of that definite article in the title is as brilliant as the rest of the LP, which has a specificity that will remain applicable long after the Challenger explosion referenced in Prince's lyrics is forgotten. "Sign O' the Times" is the sign of anytime, a landmark achievement from another era that continues to show us how much one man can accomplish alone in a recording studio.