Did "Black Hawk Down" sell out? 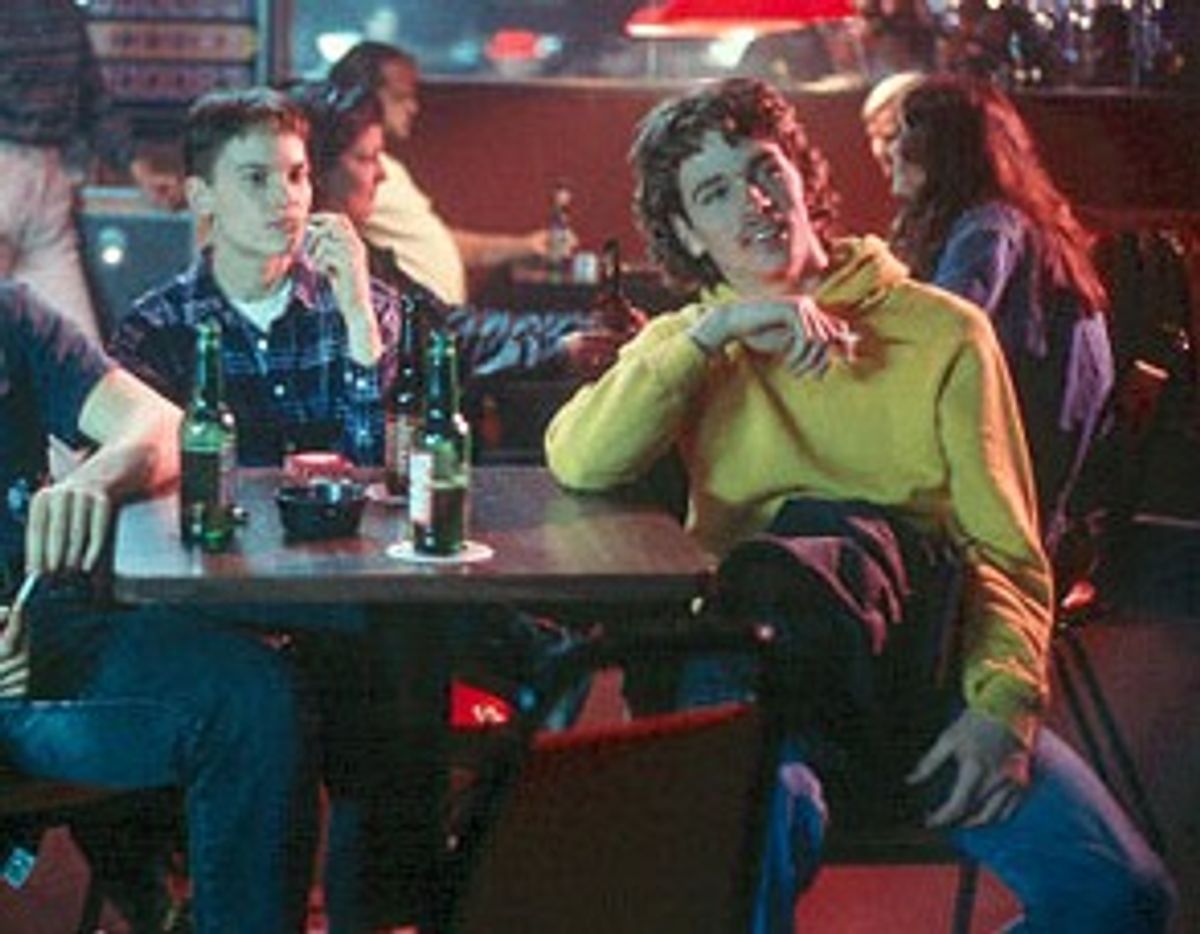 Like most of those who played soldiers in Ridley Scott's "Black Hawk Down," Brendan Sexton III was only in the film for a few moments. His character, Richard "Alphabet" Kowalewski, was fatally injured early in the battle between U.S. Special Forces and Somali militia, impaled by an unexploded missile while driving a Humvee through the streets of Mogadishu. Still, given the movie's tremendous success, you might expect the 22-year-old actor to ride the film's commercial glory toward greater things. After all, it took him a year to land another role after playing a homicidal homophobe in the acclaimed 1999 film "Boys Don't Cry," and "Black Hawk Down" was his first big-budget blockbuster.

But Sexton isn't working his connection to a movie that has so far grossed more than $105 million and been nominated for four Oscars. Instead, on a frigid night at the end of February, he crouched on a chair in a little meeting room in downtown Brooklyn and decried U.S. foreign policy. He'd been invited to talk about Somalia and his role in "Black Hawk Down" by the International Socialist Organization, an anachronistic group of would-be revolutionaries.

Dressed in a gray sweater and baggy jeans, Sexton gestured like a hip-hop MC while reading a speech. "Jerry Bruckheimer has made millions of dollars producing propaganda," Sexton told the crowd of 30. No one looked surprised.

Before the U.S. had permanent bases in the Middle East, he continued, they needed a strategic position in Somalia. That's why America supported dictator Siad Barre, who "exploited clan rivalries that exploded into civil war." While text at the beginning of "Black Hawk Down" claimed that the Americans were there to alleviate the famine, Sexton insisted that "the basis for the famine was laid by U.S. policy."

Sexton studies Latin and Caribbean history in New York. And he sounds pretty much exactly like an idealistic college student who reads a lot of Noam Chomsky (whose writings on Somalia Sexton directly echoed). In the side room off the Beat Cafe, the self-proclaimed "knee-jerk anti-imperialist" accused the U.S. of "mass slaughter on a massive scale" and dreams of a "socialist society, a society where we as working people control all the wealth in society."

Sexton continued for about an hour and a half, talking about global policy and the plight of the working man, citing the majority of the leftist writings on Somalia. But the most fascinating thing about the entire evening -- besides finding out that film actors are downtrodden proletariat too -- was listening to his gutsy, unscripted candor as he attacked a movie that could be his meal ticket.

"I didn't think it was the greatest thing in the world, but I thought the script raised good, important questions about why the U.S. was there," said Sexton. His character, he said, was supposed to be the only Ranger who didn't want to be in Somalia. During a later conversation, Sexton added that there was a scene in which Josh Hartnett's character and another actor were questioning the war over a ping-pong table, saying something like, "Why are we here? What are we doing here? We're not even feeding people."

Yet Sexton, who thinks he lost his original copy of the script, didn't provide proof of the ostensibly censored lines, lines that Mark Bowden, who wrote the book "Black Hawk Down" and who collaborated on the screenplay, says were never there. Having the soldiers question U.S. policy "would have been unrealistic, because these young soldiers knew almost nothing about Somalia," Bowden said in a phone interview.

There's a hint in the book "Black Hawk Down" that Kowalewski wasn't happy in the Army, but his dissatisfaction had nothing to do with politics: "Kowalewski was new to the unit, and quiet," Bowden wrote. "He had just met a girl he wanted to marry, and had been talking about leaving the regiment when the tour was up in a few months."

In fact, the missing lines were likely Sexton's own improvisations. "I was originally given a scene with another actor who is quite radical -- actually, he's a revolutionary -- and we were scheming to put our politics in the movie," Sexton says. "Fortunately for the military, that scene was cut."

Yes, it's easy to laugh at some of his rhetoric. After all, this is someone who took up a point made by a bearded middle-age black man with the phrase, "as the brother over there said ...." And the ISO, which Sexton says he's been involved with since he was 14, is a harmless but intellectually dubious organization that claims allegiance to Marx, Lenin and Trotsky. To criticize a Hollywood film for not representing their perspective is like bashing Vogue for leaving Andrea Dworkin off the masthead.

Yet Sexton's insights about the Pentagon's role in the film shouldn't be discounted. Nor should his inspiring if quixotic bravery in risking his Hollywood reputation for his convictions. For all his undergraduate radical-chic bombast, he's using his minor celebrity to point out the very real ways in which "Black Hawk Down" distorts the historical record.

According to Sexton, the military hijacked the project early on. "Once we started shooting in Morocco, I saw that the Pentagon had veto power," he says. "The Pentagon didn't want another 'Three Kings' out there. They wanted to make sure the film was as right-wing as possible."

He is sketchy on the details. Indeed, throughout his talk and dinner afterward at a Latin American diner, he seemed to be doing a weird dance with his confidentiality agreement, pushing its limits without totally flouting it. As he said at one point, "I'm not in the most solid position right now." He claimed he had "supportive legal counsel," but that most in Hollywood didn't know what he was doing, and that he was trying to keep it "hushed." Yet his insider's perspective strengthens charges that have been made elsewhere.

"The military was so helpful in making "Black Hawk Down" that it deserves a production credit," wrote Michael Massing in the Nation. He reported that the Pentagon provided advisors, eight helicopters and more than 100 soldiers from the Ranger company that fought in Mogadishu. But first, of course, the military had to vet the script.

Bowden, who spent several weeks on the set in Morocco, confirms that the military was involved in shaping the film. "The movie people had to negotiate with the Pentagon people in order to get Black Hawk helicopters and Rangers," he said. Yet to his knowledge, most of the issues the military raised were "very technical ones -- the way soldiers would carry their weapons and move."

That's not to say that there weren't ideological skirmishes. Initially, Bowden said, "The Pentagon wanted the movie people to promise not to have me involved at all." Not because they were unhappy with his book "Black Hawk Down," but because they were enraged by his 2001 "Killing Pablo," a newspaper series and book about the hunt for Pablo Escobar that revealed the role of U.S. Special Forces in South American death squads. However, the filmmakers didn't relent, and Bowden said once things got underway there was no friction between him and the military people.

Bowden said the biggest change the military insisted on was one of the characters' names. Ewan McGregor's character was based on a man named John Stebbins, but whose name was changed to Grimes for the film. That's because Stebbins is currently serving 30 years in prison for molesting his daughter, and the Pentagon didn't want him being held up as a hero. "I don't consider it a substantial concession. It doesn't change anything about what happened in the battle," Bowden says.

He also insists there was no ideological bias in the movie. "I've been somewhat amused by efforts to discern a political subtext or message in the film because in my opinion there is not one," he says. "I worked very closely with Ridley and Jerry, and they never intended one either. It's a film about a group of young men who desperately want to experience combat and get their wish and are considerably wiser, those who survive, at the end of it. It's extraordinarily accurate to events of that day and I know more about the events of that day than just about anybody." Given the film's intense focus on the terror of battle and the ravages artillery inflicts on the human body, Bowden even considers "Black Hawk Down" an antiwar film.

As for Sexton, Bowden didn't call him a liar, and even conceded that the screenplay went through so many revisions that it's possible Sexton was given questioning lines that were later cut. If anything, he sees him as a bit of a pawn. "There's this whole school of leftist interpretation and writing on the film that's just ludicrous," he said. "I gather they found in this hapless young actor a spokesman for their theory that there was a plot to change the movie."

Yet even if the military didn't directly intervene to tilt "Black Hawk Down," that doesn't mean the movie isn't serving the Pentagon, even inadvertently. Especially in the current political climate, the film's reluctance to even hint at the roots of Somali rage reinforces the simplistic American perspective that our battles abroad are clear contests of good and evil.

Bowden doesn't fault the movie for jettisoning this background, pointing out that it's impossible for a film to provide the kind of context that a book does. Yet by completely ignoring the Somali history, the film confirms the myopic idea that anti-Americanism is a primal madness.

As for Sexton's statement about Bruckheimer profiting from propaganda -- well, the last few weeks have proven him right. It's been widely reported that Bruckheimer is collaborating with the Pentagon on a reality TV show about American soldiers in Afghanistan. "There's a lot of other ways to convey information to the American people," said an admiral in the New York Times.

Plenty of people outside the military-entertainment complex have decried this new alliance, but not enough people on the inside have spoken out. Brendan Sexton III is risking a position other young actors would sell their souls for in order to condemn his industry's role in obscuring reality. He's not on CNN, but he's doing what he can, speaking at Vassar and at Columbia (with fellow "Black Hawk" actor Danny Hoch). Sure, his message is littered with naiveté and hyperbole. There's truth there, too.