"My job is to choreograph chaos" 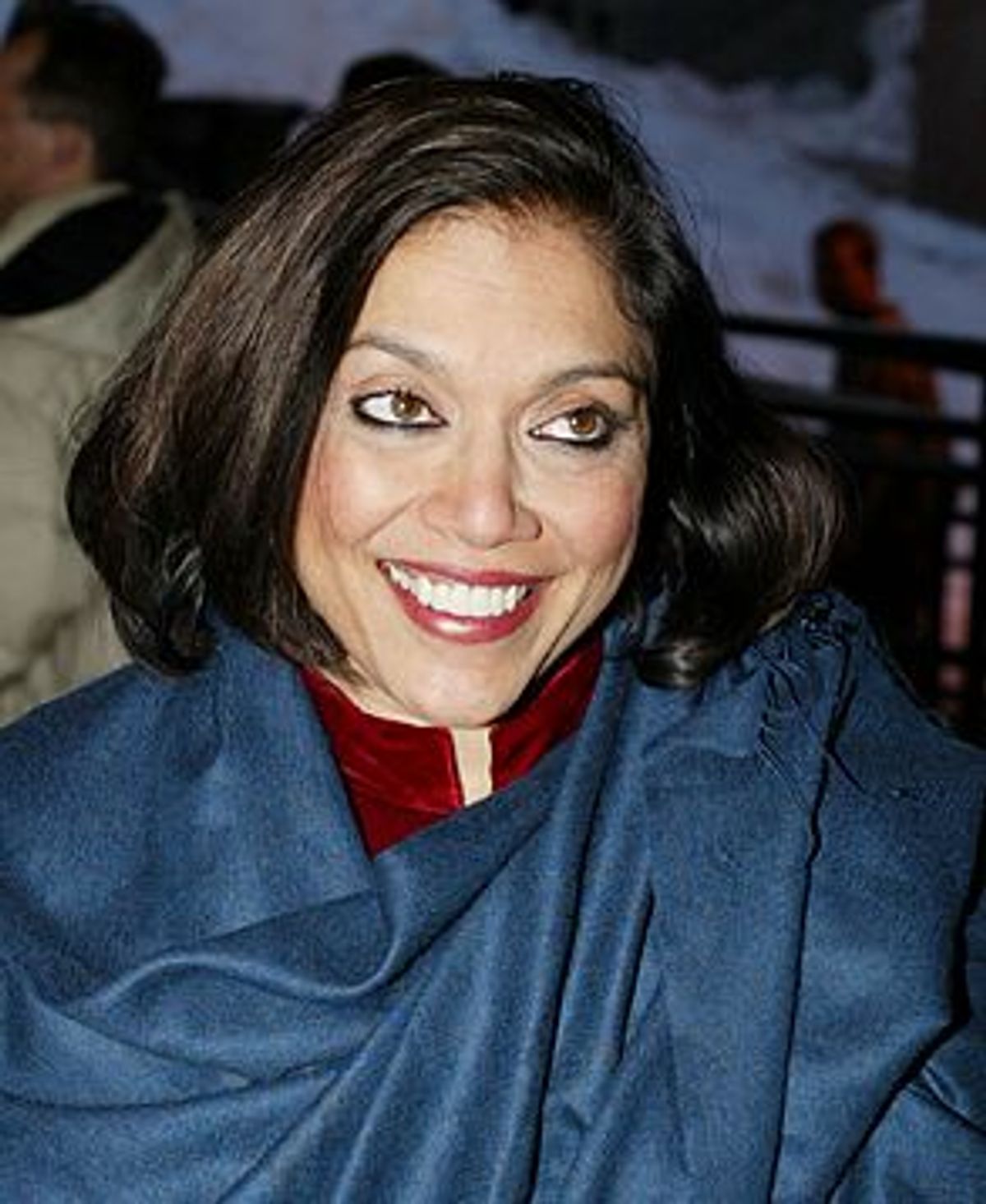 Indian filmmaker Mira Nair originally left her home in New Delhi to study sociology at Harvard, and her subsequent career continues to probe the boundaries of social interactions. In her films, Nair displays a fascination with the ways human beings adapt their cultural traditions to changing environments: Bombay street urchins in "Salaam Bombay!," exiled Cubans in "The Perez Family," African-born Indians resettled in the American South in "Mississippi Masala."

In her latest film, "Monsoon Wedding," Nair shifts her attention back to India to focus on her own Punjabi background. The film follows an upper-middle-class Delhi family gathered for an elaborate weeklong wedding celebration, filled with singing and dancing, during the monsoon season. It captures the paradoxes and pleasures of contemporary urban Indian society, a combustible marriage of ancient traditions, global consumer culture and high-tech communications.

Describing the film as a homemade and home-grown homage to the big-budget "Bollywood" musicals for which Indian cinema has become famous, Nair has produced a rollicking film about her homeland that comes with a universal appeal. Indeed, "Monsoon Wedding" won the top award for best picture at this year's Venice Film Festival and is breaking box-office records at art houses in New York and other cities throughout the United States. Catchy Indo-pop music, traditional Punjabi wedding songs and old-school tunes from musicals familiar to generations of South Asian moviegoers are incorporated into the film's soundtrack to support and comment on the five plotlines running throughout the wedding celebration.

Each narrative in "Monsoon Wedding" represents some aspect of love: The bride-to-be waits until the last minute to choose between her married ex-boyfriend and the groom selected by her family through a traditional marriage arrangement; the builder hired to erect the wedding pavilion silently courts the family maid; the bride's harried father discovers comfort in his wife and children; a bumbling cousin who grew up abroad flirts with another relative, a hot Delhi beauty; and a fiery unmarried cousin reveals a dark secret.

I spoke with Nair by telephone just after she'd returned to her New York home from a stint as jury president at the Berlin Film Festival.

What inspired you to make "Monsoon Wedding"?

The whole film was conceived in a spirit of self-imposed leanness. I wanted to make a lot of nothing, to consciously turn my back on big budgets and manipulations and excesses of any kind. I decided to make a film in 30 days even before I did the script. That way you can finance it, because there's nothing to lose! I wanted to make a self-imposed low-budget film, and then while writing the film it became a circus, with 68 actors and five plotlines and 30 days.

Did you have everything pretty much written by the time everyone had assembled at the start of the 30-day shoot?

Yes, the script had mostly been written but then it was consciously refined, sculpted and pared down and, in some cases, expanded while working with the actors during improvisations that took place during the filming. In order to achieve such a large film in 30 days, it eventually required much more mastery and discipline behind the camera.

Did you choreograph the dance scenes?

We worked with a great choreographer [in a studio] for about two weeks before shooting the first sequence and then he came to work on set with us. I'll never forget what he asked me. He said, "Do we have four days or five days for this sequence?" and I answered, "We have four hours." His jaw dropped. To shoot a big scene in four hours is unheard of in India. Well, anywhere, really. But we did it. "Don't worry," we said, "we'll go ahead and plot around it."

Did you look for dancing ability in your actors?

Because the film was really a homemade portrait of Bollywood, I didn't require a big-time Bollywood dancer to do it. The film was about people like us imitating Bollywood style. So I never tested the girl who I cast, I just hoped she could dance. I asked her and she said "Oh, I love to dance," that kind of thing. But I never auditioned her as a dancer.

Did you select the music yourself?

Yes, it was all personally compiled. Some music that played in the film, like the dance sequences  well, two of the three -- was pre-planned. The big number in which the girl dances [Ayesha, played by Neha Dubey], that was something we purchased the rights to before we started shooting. That song was a very hot number at the time. I just asked my niece, who was in college, "What are you dancing to?" I heard a number of these and I picked that song because I wanted a song that could be reinterpreted in a pretty modern way and be a crossover popular song.

All the other Indian pop songs in the film are personal choices, mainly '70s Bollywood pop songs that I love for one reason or another. For example, this great love song that the lovers hear on the radio, while they are making out in the rain -- that's a song my husband would sing to me in our courtship. So it's very personal, the whole thing. And each song is laden with double meanings, to comment on the situation that's happening on-screen. Like the song playing when Alice [the maid] bumps into P.K. Dube [the contractor] and the glasses fall is a '70s song that says, "Today the weather is playing tricks on me. Is something happening or nothing happening?" These lyrics directly relate to the magic of Alice and Dube and the monsoon that is to come.

You've commented elsewhere that Indian kids today have realized that it's hip to be Indian. Why do you think the younger generation of Indian youth, including nonresident Indian youth, embrace these songs? Is it ironic?

In my generation, we embraced the music as nostalgic but lovely. Kids today look at the '70s music anew because oftentimes the music comes back to them remixed, so it's being embraced as contemporary music. Like the song in the film that I bought is a classic song which has been remixed and redone by a band in Delhi called the Midival Punditz. [The song is "Fabric," a remix of a classic tune called "Ras Se Behare Tore Nain."] It's wonderful! These are kids you'd never imagine would know such a semi-classical song, but they've done it and they've remixed it and made it into something modern.

Who did you make this film for? What kind of audience were you envisioning?

I made the film just for myself. Really, truly, I'm telling you, I put myself through this river of 30 days, and the madness and all the fun of it too, because I wanted to lower the stakes. So that I had to just please myself, be truthful to myself and not pander to anybody's demands on me. How will they understand three languages spoken in one sentence? How will they understand all these different types of music? How will they understand five plotlines at the same time? There are so many ways you can just undercut yourself. But by leaving it so low-key and so "everything through the backdoor" as I always say, I just had to be true to myself.

I applied this sensibility to this film more than any other film I've done. With "Salaam Bombay!" nobody knew me, but this one, after I'd done the big things -- the epics and the big budgets and the Hollywood productions -- I just wanted to make a film as the purest act of making it. It was a utopian idea and it worked.

Surely Western audiences won't get all the jokes, all the layered references.

I hear them laugh in the film. The film is so local and authentic to itself, but it's actually universal in different ways you don't imagine or don't know. I've heard, especially with this film, people from Iceland to Hungary to Southern California asking me how I knew about their family. How did I do that? It's a very Delhi family, in a real way, but they can relate to it. As long as people can identify with the stories and the characters, they can always discover the deeper meanings and the jokes later. The great thing about a film with five stories is that a lot of people can return to see it again!

You enjoy the circus aspects of making films and yet say that you want to simplify your filmmaking process. How do you reconcile those two concepts?

My main work is to choreograph chaos. The chaos has to be choreographed perfectly so that you can capture it, but the planning has to be such that during the very act of shooting I want to be in a state of complete emptiness; sort of have a space in my brain so that it can happen and intuition can take over and can work with what's in front of me. That is a good example of the yin and yang of chaos and simplicity. You mastermind the chaos, you choreograph it and control it as best you can and then you expel it to the point where you can just let it all go and then see what happens and make the best out of what you've seen.

There are a lot of hand-held camera shots in the film. How did you work out the camera angles?

We workshopped the scenes for two weeks with the actors, and one week with the actors in the house. We designed the camera movements and shots and knew the blocking; that's what takes time. Everyone in front of the camera knew what they were going to do when we were going to shoot. So we took our positions and let the improvisation occur, but already knew what we were going to do because we'd achieved so much in so little time. Always the idea was not to do this myself and then just connect the dots. I would never just connect the dots, I always wanted to do it interestingly, not by rote. Why do that? The idea was always to be at play, but to be at play you had to be enormously prepared.

You come from a theatrical background, both as an actor and a director. How does your acting background inform your sensibility as a filmmaker?

Your screenwriter on this film, Sabrina Dhawan, was one of your teaching assistants in Columbia University's graduate film program. I've been impressed that you've mentored other women in your career. Was that a conscious effort?

Nothing pleases me more than to see interesting creative expression realized. That pleases me very much if it happens to come from women, but it's not conscious. In "Monsoon Wedding" we didn't set out to get a crew of 90 percent women. We just ended up with the best crew that happened to be women. That's fantastic.

You have become so prolific. It seems like you put out a film every year.

It's been a boom ever since I moved to New York. I've become a cosmic force, I did "The Laughing Club of India," "Monsoon Wedding" and "Hysterical Blindness" [premiering on HBO this spring] all in one year. I don't know what I'm doing next.

In closing, do you see any parallels between the success of "Moulin Rouge" and your own film? Did Moulin Rouge accomplish its goal of uniting Bollywood with the Western musical?