The independent counsel's pathetic final report reveals what a travesty the right wing's get-Clinton crusade was. 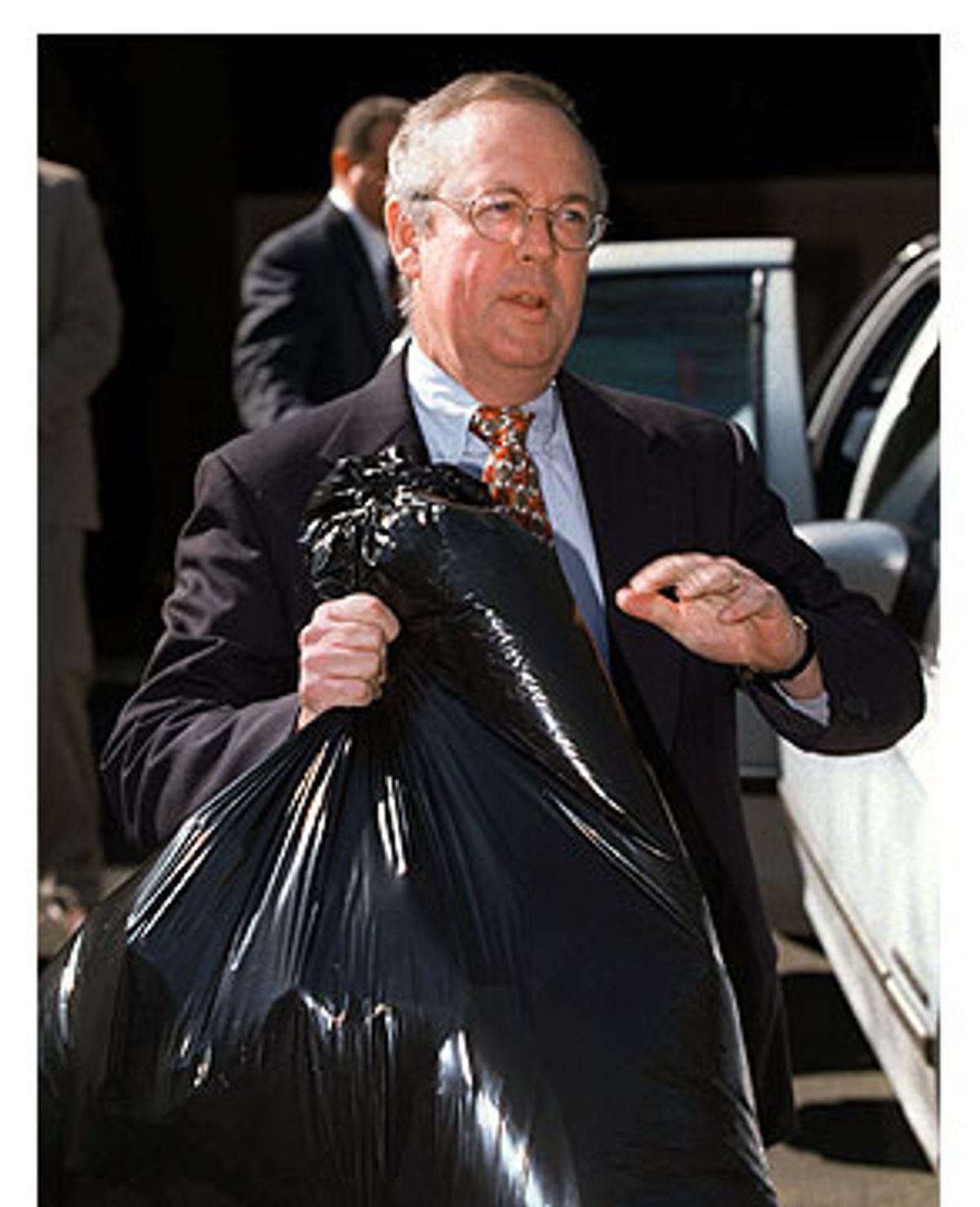 Robert Ray had enough evidence to indict and convict President Clinton -- he just chose not to. That was the headline on nearly every story about the Office of Independent Counsel's Final Report on the Lewinsky investigation, released last week. To his critics, Ray sounded like a schoolboy who, after running from a fight, later claims he could have beaten the other guy up. Really. He just decided not to.

How good was the evidence Ray had? We still don't know. The report sheds almost no light on the quality of his case against Clinton. We've known for years that during his deposition in Paula Jones' sexual harassment lawsuit against him, Clinton's answers to questions about Monica Lewinsky were comically evasive, even to the point of lying, if we mean "lying" in the common-sense, colloquial sense of the term. There's almost nothing new here.

What is new in the report is, strangely, getting very little attention. Or maybe it isn't strange. So much of the media was invested in breathless, often uncritical coverage of Clinton's impeachment, and the investigation that triggered it, that to blow the whistle on Ray's report might force reporters to look at the extent to which they colluded with the president's enemies. The investigation Ray inherited from his predecessor Kenneth Starr cost $70 million, and in the end yielded only the promise that it could have led to the president's indictment, but didn't. We all deserved more than that. (Although stay tuned: Ray promises that Part 2 will focus on Whitewater, the Clinton land deal that launched the Starr investigation in the first place. But since Starr himself decided not to proceed with indictments in that matter, it's probably safe to assume Part 2 won't contain any OIC-vindicating bombshells, either.)

But if the Clinton evidence isn't big news, the Ray report contains at least two fascinating revelations that haven't gotten nearly enough coverage. First, Ray's claim that the investigation showed that Starr's office didn't illegally leak grand jury information to the media is preposterous, based on a parsing of evidence more misleading than Clinton's famous "depends on what the meaning of the word 'is' is." And second, after spending almost $2 million to investigate her shocking claims against Clinton, the OIC apparently found Kathleen Willey, whose smeared lipstick almost toppled a presidency, not believable.

Even Ray's justification for releasing the report now ought to raise some eyebrows. He wrapped the report in a mantle of obligation: This was no press release trying to prove in the court of public opinion what he couldn't prove in a court of law! It was one of his official duties as independent counsel.

Only it wasn't. Not only was Ray not obligated to explain why he didn't charge President Clinton, it's not even entirely clear the law permitted him to do so. Yes, the original independent counsel statute, which expired in 1994, obliged the counsel to issue a report explaining the reasoning for not bringing charges against the target of the investigation, if he or she chose not to do so. But when the law was reauthorized in 1994, this clause was removed. The Senate version of the bill explicitly barred such an explanation -- figuring that an independent counsel might use the opportunity to do just what Ray did: tar his quarry in public even if he couldn't nail him in court. That was stripped away in legislative conference committee, and the law was silent on whether such a report should or should not be issued. (To be fair, Ray includes a long argument, based on the legislative history of the 1994 law, for why he decided he should issue such an explanation anyway -- but it isn't convincing.)

Even less convincing, however, is his brazen attempt to acquit Starr's office of one of the most damaging charges against it: that the OIC had illegally leaked secret grand jury testimony to the press, a violation of Federal Rule of Criminal Procedure 6(e). Now, plenty of published accounts have found that the OIC did leak secret grand jury testimony. Then there's the uncomfortable fact that countless articles were written in which leaks appeared, attributed to unnamed sources in the Office of Independent Counsel.

Notwithstanding all this evidence, Appendix C of the report is a triumphant defense against all the accusations that Clinton's lawyers and others made against the OIC, claiming that they were all found to be "unfounded" or "unsubstantiated." It bears the screaming headline "No Person in This Office Was Found to Have Violated Federal Rule of Criminal Procedure 6(e)," in case anybody was in danger of missing the point.

But the real story is hidden in Clinton attorney David Kendall's "comment," a letter written in response to Ray's report, which was attached to the report when it was finally released. Kendall is obviously very much an interested party in this dispute. But the simple factual case he musters is hard to refute. As Kendall makes clear, the OIC was never cleared of his allegations. In fact, Judge Norma Holloway Johnson found prima facie evidence that the Office of Independent Counsel's office had violated rule 6(e). She found that the violations were "serious and repetitive," and that "a complete and thorough review of these allegations must be undertaken." Judge Johnson assigned a special master to investigate the charges.

The investigation droned on until February 2001. That's when Robert Ray himself asked Clinton and other complaining parties to withdraw the cases relating to the alleged leaks, in order to conclude all matters relating to the investigation. In the spirit of moving on, they did so. Ray's claim that the OIC was therefore exonerated on the leak charges is so transparently ridiculous that one wonders why it hasn't received more scrutiny from the press. But don't wonder too long, because the answer readily suggests itself: The folks who covered the OIC were themselves actors in the drama, since they received the leaks. In her March 7 article on the report's release, the Washington Post's Susan Schmidt -- widely considered the most slavish recipient of OIC leaks -- passed along Ray's shockingly disingenuous claim with an aside quoting Kendall saying he'd agreed to the dismissal "because 'it was time to move on.'"

Ray's critics cite his current bid for the GOP Senate nomination in New Jersey as evidence that he, like his predecessor Kenneth Starr, was less an "independent" counsel than a partisan with a political agenda. His obfuscatory handling of the crucial leaking issue does nothing to silence such critics. Maybe the most disturbing new information in the report, however, concerns the claims of Kathleen Willey, the Virginia Democrat and White House volunteer who accused the president of groping her during a brief private meeting in the Oval Office in November 1993. She told Newsweek the encounter left her looking tousled, with smeared makeup, and her story was partly backed up by that arbiter of Lewinsky saga credibility, Linda Tripp.

The Willey story was trouble for Clinton. As a Democrat, she had no obvious political motive for accusing the president. Unlike Paula Jones, she lacked a clear financial motive. For a time, virtually every TV talking head found her credible. "She came across as quite winsome, I think it's fair to say," Chris Matthews fondly recalled in mid-1999. "People liked her. She seemed credible, middle-class and all the nice things in this country."

But Willey didn't merely hurt Clinton. It was also on her say-so, and to sustain her credibility, that the OIC pursued a merciless prosecution against Julie Hiatt Steele, one of the bit players in the Lewinsky saga, but one of the most damaged. Steele was a onetime friend of Willey's who first said Willey had confided in her about the groping incident shortly after it happened. Steele later recanted this story and told the grand jury that Willey had put her up to it -- testimony that won her an indictment from the OIC for obstruction of justice and a series of bizarre side investigations into matters as far afield as the legality of the adoption of her daughter. (The case ended in a mistrial in May 1999.)

So how credible is Kathleen Willey? Apparently, not very credible at all. And that's not the word from some Clinton lapdog, but from the OIC itself. Appendix B of Ray's report analyzes Willey's accusations and concludes, rather hermetically, that "there was insufficient evidence to prove to a jury beyond a reasonable doubt that President Clinton's testimony regarding Kathleen Willey was false." But that conclusion is a comic understatement when read in the context of the report's Appendix B. The OIC lawyers couldn't even convince themselves that Willey was credible, let alone prove it beyond a reasonable doubt to a jury. They had already concluded that Willey was a liar.

For instance, as Appendix B explains, Willey's testimony in the Jones suit differed from what she told the Lewinsky grand jury. It was contradicted by the testimony of other witnesses friendly to the OIC. And, most damning, during the period when Willey was cooperating with the OIC under an immunity agreement, the OIC caught her in a lie about her relationship with a former boyfriend. (As the report phrases it, with oblique understatement, "Following Willey's acknowledgment [of the lie], the Independent Counsel agreed not to prosecute her for false statements in this regard.")

In other words, the OIC did not opt to forego prosecution of President Clinton on the Willey front because it could not prove Willey's credibility to a jury: They themselves believed she was not a credible witness. That makes you wonder why the OIC lawyers pursued their case against Julie Hiatt Steele based purely on Willey's word. And if the OIC now thinks Willey isn't credible, why didn't this get a bit more play in the press? (And should we wait around, in Part 2 of the report, for an apology to Julie Hiatt Steele?)

The Baltimore Sun was one of the few major newspapers to use Ray's report as an occasion to call the OIC investigation what it was: a $70 million boondoggle and political witch hunt. As a Sun editorial noted, the money spent on the Starr-Ray investigation would have hired 1,400 teachers for a year, sent 120,000 tons of food to Afghanistan, or provided early intervention for 24,000 young disabled children. Or as American taxpayers might put it, the OIC spent $70 million, and all we got was this lousy report.

Of course, it's not just the expense that rankles. Congress and the Clinton administration were paralyzed by the Starr investigation and by impeachment for almost two years -- crucial years during which the nation failed to use a budget surplus to solve pressing problems, while the al-Qaida terror network grew stronger. It's hard not to come away from the Ray report saddened by the colossal waste of time and money, and the report's Whitewater Part 2 isn't likely to make that feeling go away.