Storm before the calm

Israel is using the remaining days before Cheney arrives to smash the camps and cities of the West Bank and Gaza -- and militants and noncombatants alike are dying. 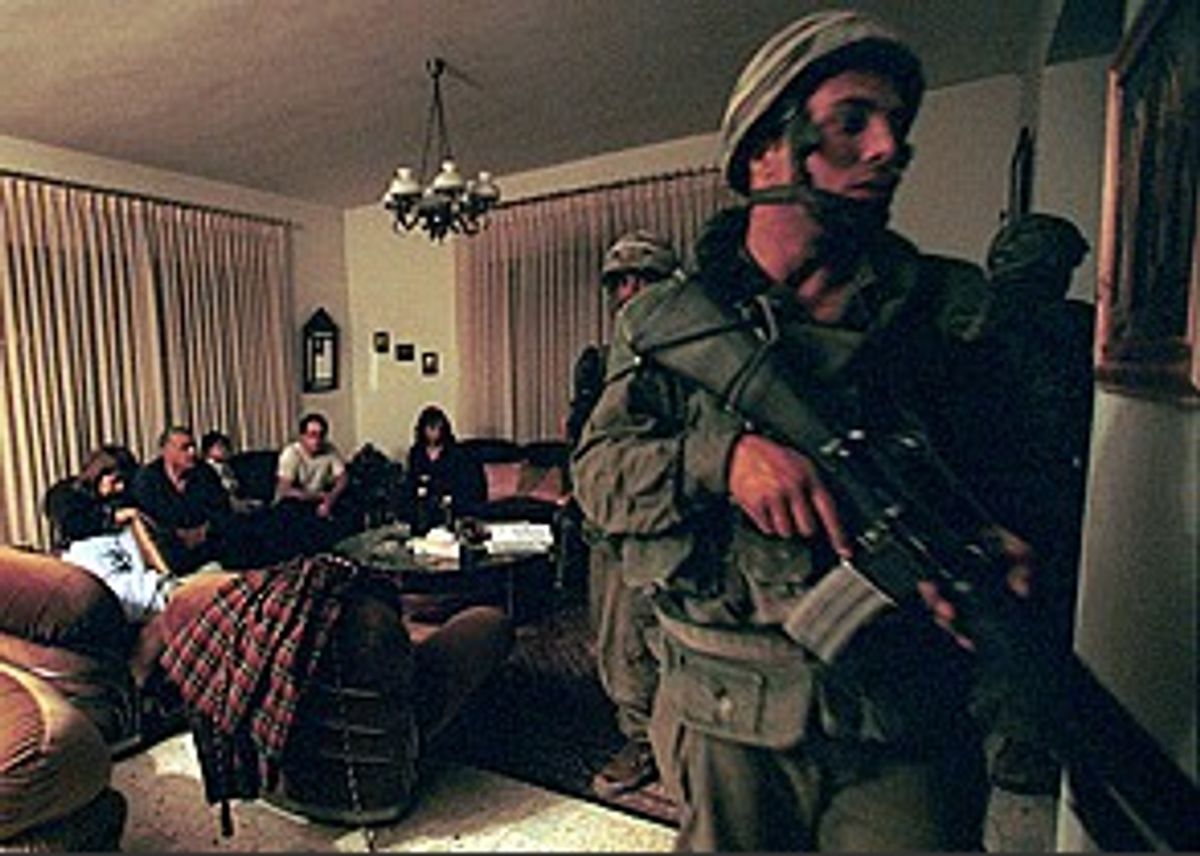 Standing beside the remains of his aluminum workshop on the outskirts of Gaza's Jabalya refugee camp on Tuesday, Sultan Muslekh pulled a tea tray out of the rubble: "This is what we make here, not rockets." His factory had been blown up that morning by Israeli troops, who claimed it was used to produce the Kassam-2 rocket that Palestinians have used (with very little effect so far) against Jewish settlements and Israeli towns.

During the four-hour blitz the Israeli troops destroyed houses and workshops and killed 18 people -- some of them apparently noncombatants. The operation in the largest Palestinian refugee camp, together with the ongoing re-occupation of Ramallah, the West Bank seat of the Palestinian Authority, is the culmination of the largest military operation since the invasion of Lebanon, 20 years ago.

That operation will have to be wrapped up in a hurry, as part of an understanding between Israel and its closest ally, the U.S. Israeli Prime Minister Ariel Sharon agreed to end the incursion by the time Vice President Dick Cheney arrives at the beginning of next week, at the end of his swing through the Middle East to shore up Arab support for possible U.S. military action against Iraq. But Sharon announced Wednesday that Israeli forces would continue their operation during the stay of U.S. peace envoy Anthony Zinni, who arrives in Tel Aviv Thursday.

International diplomacy heated up as the crisis threatened to explode out of control. In his harshest criticism of Israel yet, U.N. Secretary General Kofi Annan blasted Israel's "illegal occupation" and denounced Palestinian terrorism as "morally repugnant." Tuesday, the U.N. Security Council approved a U.S.-drafted resolution backing a Palestinian state. And the Saudi peace proposal remains a serious subject of discussion.

On Wednesday, the apparently unexpected ferocity of the Israeli military action, combined with Zinni's imminent visit and Cheney's diplomatic needs, finally led U.S. President Bush to issue a mild rebuke to Sharon, whose hard-line policies Bush has hitherto supported unswervingly. "Frankly, it's not helpful what the Israelis have recently done, in order to create conditions for peace," said Bush at a White House press conference. "I understand someone trying to defend themselves and to fight terror but the recent actions aren't helpful," he added. Bush did not issue a demand that Israeli forces withdraw from areas controlled by the Palestinian Authority.

Israel maintains that its massive military action is necessary to fight what it calls Palestinian "terrorism" by rooting out militants in the camps, whose narrow lanes and crowds offer shelter. The blanket use of the word "terror," however, is a point of controversy. There's little question that Israel would not have launched such an all-out assault without the recent dramatic rise in suicide bombers within Israel. But Palestinians argue that Israelis improperly use the word "terrorism" to denote a range of violent actions, including not just suicide bombs against civilians in Israel but rock-throwing and attacks on Israeli troops in the occupied territories -- which even moderate Palestinians regard as legitimate resistance to occupation.

How effective Israel's strikes will be is hard to say. While hundreds of Palestinians have been killed and thousands arrested, many top militants who spearhead the intifada have gotten away. Dozens of houses and workshops have been destroyed during the operation but, as in the case of the tea-tray factory in Jabalya, it is difficult to verify if arms were actually made there. In any case, the Kassam-2 rocket is not what has caused so many Israeli casualties; suicide bombers have been responsible for far more deaths.

"It will take weeks, maybe months, to see if the operation has had any effect," says Israeli analyst Gerald Steinberg of Bar-Ilan University. There are probably scores of Palestinian militants already inside Israeli territories, in place to strike, he explains. While Steinberg accepts the stated goal of the operation, destroying the terrorist infrastructure in the camps, he points out that it also has a psychological aspect. "It shows that Israel can dictate the terms, that the Palestinians have no chance of defeating Israel."

Nor has Israel had to pay too high a diplomatic price so far. A commentator in the Israeli daily Ha'aretz noted that "the international response to Israel's operations" was "generally feeble."

Domestically, the attacks have shored up the embattled Sharon's position. While Sharon has been heavily criticized by right-wing politicians for his recent softening toward the Palestinians, including releasing Palestinian Authority head Yasser Arafat from house captivity in Ramallah, the military offensive has found favor with his core constituency, the Israeli settlers in the occupied territories. "Sharon should have done it much earlier, to show them that we are strong. It would have saved a lot of lives, on both sides," says Idit Hochman, a primary school teacher at Psagot, a settlement just north of Ramallah.

From her living room Hochman has a panoramic view of Ramallah, impeded only by the sandbags on the balcony. When machine gun fire echoes into the house from the city below, her youngest daughter starts crying, "Mummy, mummy, close the window." Hochman sighs, "Usually there is not so much shooting during the day, but now with the army in there you can hear the fighting."

Psagot is frequently a target for Palestinian gunmen firing from Ramallah and the adjacent town of El Bireh. The Israelis occupied both on Tuesday, but that has not put a stop to the sniping. Adi Shpetel is a security guard at the settlement who got a nasty surprise as he walked toward his office on Wednesday morning. "I heard a shot and then a bullet whistle by. At least two more bullets hit the wall." He is convinced, though, that the army operation is helping to secure Psagot. "We coordinated with the army and because they were in El Bireh they caught at least some of the snipers."

If it were up to Idit Hochman, the army would stay on indefinitely. "At least until they teach their kids not to hate us. I never tell our children to hate them or that we have to shoot back when they shoot at us," she says. She is worried that the government will be forced to withdraw the soldiers because of outside pressure, and has much more faith in the ability of the army to put an end to the violence than in the mission of Gen. Zinni: "Last time Zinni was here, it actually led to violence."

Gerald Steinberg, too, is skeptical of Zinni's ability to influence events positively. "What has changed since his last mission? Nothing except for the number of casualties, and that is not enough yet to really affect his chances of success." In the analyst's view, the main purpose of Zinni's mission is to cover the flank of Vice President Dick Cheney as he attempts to shore up support for the U.S. policy toward Iraq: the administration needs to make it appear that it is seriously engaged in the Israeli-Palestinian conflict.

Other Israeli commentators, however, think that the government and the army are operating on the assumption that Zinni means business this time. The current offensive "is actually a last-minute maneuvering before the expected fist of U.S. envoy Anthony Zinni comes down in an effort to achieve a cease-fire both sides crave," wrote Arieh O'Sullivan in the Jerusalem Post.

For now, though, the guns still haven't fallen silent. In Gaza's Shifa hospital, a policeman who is visiting a friend who got wounded in Jabalya expresses what most feel: "Sharon said he wanted to kill as many of us as possible to force us to give up the resistance. That is why they went into Jabalya and into any other camp or city."

When Israeli tanks rolled into Jabalya late Monday evening, most members of the Palestinian security services and the police as well as armed militants fled the camps towards Gaza City, by all accounts. Some of the wounded in the Shifa hospital say they were hit while trying to get away. Others acknowledge they fought the invaders, albeit briefly.

"We shot at the tanks but when they returned fire with their machine guns, we saw there was no use," says Bahjat, a 20-year-old Palestinian who was gravely wounded and who lost two brothers in the incursion. He tried to flee the approaching tanks and hopped into a car carrying the corpses of several fighters. "When I got into the car, I saw that one of them was my brother Mohammed," he says, moaning with pain while he tells his story. His other brother, Hani, was a member of the armed wing of the Hamas movement, the 'Izz al-Din al-Qassam Brigades. When he retreated further, Bahjat saw the body of Hani, still holding his gun in his hand.

There are strong indications that civilians were hit too, though. On the top floor of the stairwell in the house of the Izzedine family, a huge pool of dried-up blood marks the site where father Abdul Rahman and his son Walid were hit by bullets. Israeli soldiers fired from a neighboring building when Abdul Rahman tried to close the door to the roof, his family says. Just minutes before he had called down the stairwell to his family to remain indoors.

Abdul Rahman was instantly killed by the bullets. Walid, who was shot when he went up to help his father, lingered on for a while, says Samah, Walid's sister-in-law. "We are not interested in politics, we didn't have guns in the house, why did this happen?" Samah asks. The family called an ambulance but it couldn't get through for three hours. "I opened the window and saw three tanks in front of the house," says Samah. "I was so afraid."

In the living room, the women of the family open a bag of bloodstained clothes: A couple of T-shirts and Abdul Rahman's once-white skullcap. They hold the clothes up as more evidence of what has happened. Samah cannot muster any understanding for the Israeli actions, nor does she feel any sympathy for Israeli civilians who are killed in Palestinian actions. "The difference is that we are really innocent civilians while even if they are civilians, they still occupy our land," she says.

The walls of Jabalya already bear dark predictions of the future, ones that history has shown are likely to come true whether Zinni or anybody else succeeds in arranging a cease-fire. "Hey Jews, you are cowards," reads the graffiti which is signed by Hamas. "We swear we will revenge this aggression, you just wait."