Two women fall in love with no place to go in this bright and funny romantic comedy. 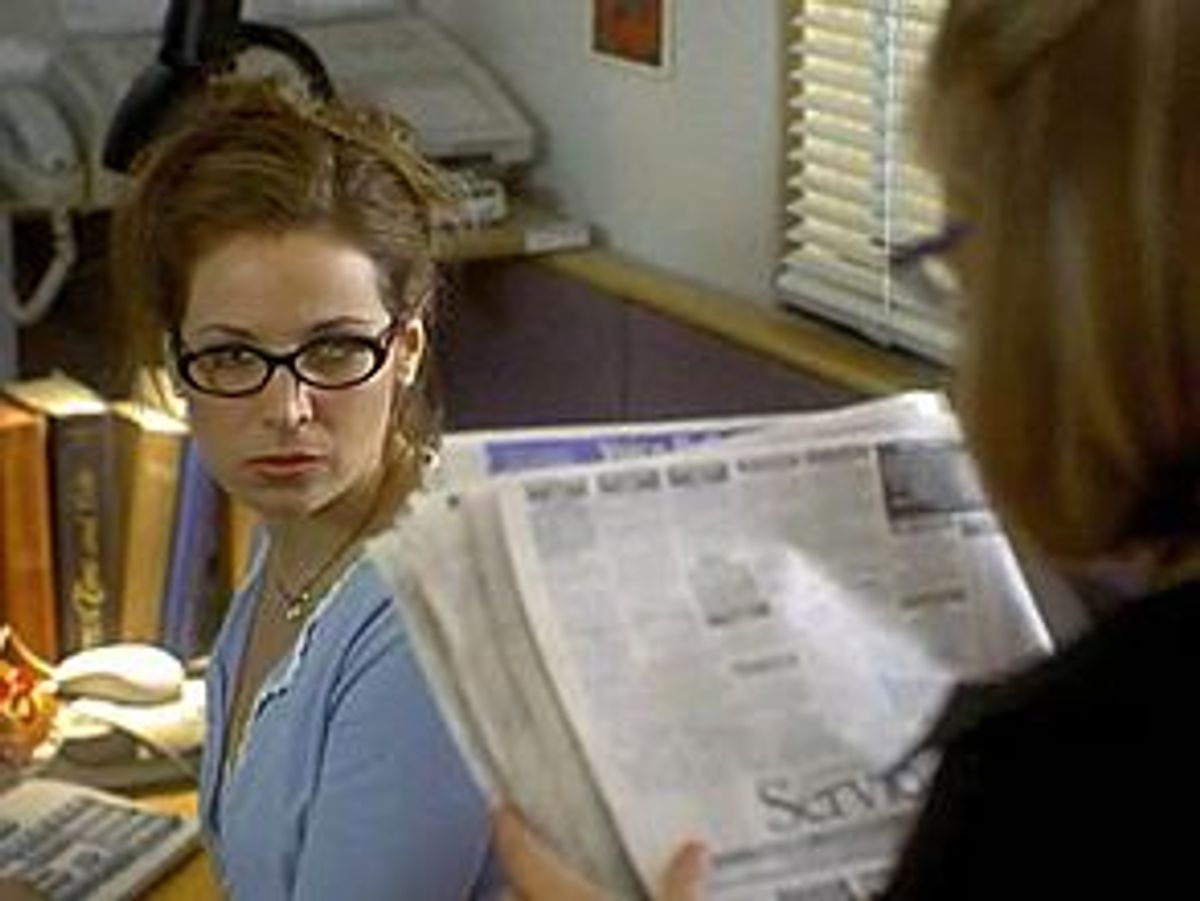 "Kissing Jessica Stein" is a romantic comedy about two young women who meet, get on like gangbusters and fall in love, only to discover they don't know where to go from there. The movie itself has the same problem: The first half has some of the neurotic juiciness of early Woody Allen, and a similar loose-jointed, knock-kneed charm. In the second half, you can almost feel the panic of the writers, Jennifer Westfeldt and Heather Juergensen (who are also the stars), sweating off the screen. They have no idea what to do with the story once they've set it up, and the mad scramble to wrap it up doesn't feel right.

But then any bozo can make a movie with structure. We live in a moviemaking world where the subtleties of mood and feeling often take a back seat to winking self-awareness and film-school earnestness. We've gotten so used to allegedly outsider filmmakers with all the right moves that we're reluctant to acknowledge how tone-deaf they can be. Not even slickness is the sin it was in the old days: I'll take the brightly polished sheen of "Serendipity" over the play-school Lego-construction of "The Royal Tenenbaums" any day.

Maybe that explains why even an imperfectly shaped little picture like "Kissing Jessica Stein" feels like just the ticket right now. The picture grew out of a series of theatrical sketches developed by Westfeldt and Juergensen on the subject of dating hell, which must be why the first half of the movie works so well: Westfeldt and Juergensen, guided by director Charles Herman-Wurmfeld, fly through it without a hitch. These are brilliant bits of sketch comedy strung together like multicolored Christmas lights; they get tangled later when more dramatic shaping is called for, but at least they're still blinking with life.

Westfeldt is Jessica, an extraordinarily neurotic copy editor who works for a hard-ass, wiseass boss named Josh (Scott Cohen), whom she also dated briefly years earlier. She's a bright, beautiful girl, but like thousands of other bright, beautiful girls in New York, she's been single for far too long. Her family, including her well-meaning but overbearing Jewish mother, Judy (Tovah Feldshuh, funnier and less obnoxiously actorish than usual), and her friends, among them the 40-ish, newly pregnant, cat-eyeglass-wearing Joan (the appealing Jackie Hoffman, who resembles a pint-size Bette Midler), have begun to worry.

And like single women everywhere, Jessica is on the verge of being branded with that most damning label: "Just too picky." Jessica has polished honey-blond good looks that allow her to seem at home both uptown and down; she's so just-in-the-middle that she fits into every landscape and none at the same time. We're told her great passion is painting, and although it doesn't seem in character (it's a device thrown in to suggest a secret, artistic side), it does make sense that there's more sensitivity, intelligence and flintiness to this girl than her surface conventionality would suggest. You can see how it might be difficult for her to find a man who would be smart enough for her and able to handle her breathlessly rat-a-tat neurotic patter.

And so it turns out that her perfect match may be a woman. She meets Helen (Juergensen), a vibrant, sexually open downtowner who works in an art gallery and, having grown tired of men, has placed a personal ad in search of a girlfriend. Helen has had no trouble attracting guys: Her pillowy mouth and Betty Boop eyes signal the kind of fun, flirty sexual assertiveness that draws men in even as it vaguely terrifies them. Her sexuality is all on the outside as well as in: She's like an orchid with lips.

But she does have good sense and a good heart -- this isn't a story about a cruel experiment, or even a flighty, quickly forgotten one. Jessica and Helen begin to argue almost as soon as they bond. Jessica, skittish about even the possibility that she might be attracted to a woman, doesn't respond well to Helen's touchy-feely speech about her devotion to yoga. As they walk down a nighttime city street, they're catapulted into an argument by the sight of a bunch of Hare Krishnas chanting in their characteristically peacefully aggressive manner. ("They have no goals!" Jessica announces firmly.)

Their relationship evolves both slowly and bumptiously headfirst. Jessica needs to spend lots of time just kissing Helen in order to get used to the idea; Helen is eager to go further, faster. But the awkward mismatch of their rhythms makes the movie feel real and natural. The picture also tangos right into the territory of the eroticism of even platonic female friendships. At one point, Jessica gabbles to her mother on a cellphone from the back of a cab, barely breaking stride to lean over and stroke the knee of Helen's leather trousers and absent-mindedly mutter, "What are those pants, I am so borrowing!"

Helen and Jessica set out to transform themselves into lesbians even as they share lipstick tips. And ultimately, even as they forge into the dazzling underbrush of this new territory, they make the same mistakes that plenty of hetero couples make.

There may be some gay and lesbian groups who will object to the movie's sexual politics. (The issue is addressed briefly in a scene where one of Helen's gay friends accuses her of trying lesbianism on as if it were the latest fashion.) But I'd say "Kissing Jessica Stein" is refreshing precisely because it has no sexual politics. Its overriding message is that there's no explaining sexual attraction, and there's no way (or need) to justify who turns us on and why at certain points in our lives.

Westfeldt and Juergensen keep "Kissing Jessica Stein" bright and funny and loose, and Herman-Wurmfeld moves along with the flow. The picture was shot on location in New York, with a very small budget. Most of the "extras" are real people who just happen to be walking by. Herman-Wurmfeld's camera makes the city feel alive and thriving, as if it were the movie's third major character.

You may think the world doesn't need another movie about single people looking for love. But as long as there are people looking, there ought to be movies like "Kissing Jessica Stein." Even its more stock setups are handled so well that you forget you've seen them before. Instead, you take delight in seeing the old conventions properly staged and polished -- for instance, an early montage of Jessica's bad dates that moves along so swiftly and pleasingly that we're swept along in its current. (The winner in that bad-date contest is the alleged writer who pompously spins out malapropisms, announcing how "self-defecating" he is.)

And then there are moments like the early one in which Jessica, unsure that she wants to "become" a lesbian, looks at Helen, who has dressed up beautifully for one of their dates, and exclaims almost mournfully, "Look at you! Who wouldn't want to have sex with you?" Jessica does and she doesn't, but she just isn't sure, while Helen, patient but hopeful and waiting in the balance, awaits the final decision. They're a match made in heaven, or maybe just the shoe department at Bloomingdales. However it turns out, you can't say they didn't try.