Microsoft should be punished

The feds failed to order a breakup when it could have done some good. Now, based on the government's findings, Sun, Netscape and Be are suing -- with good reason. 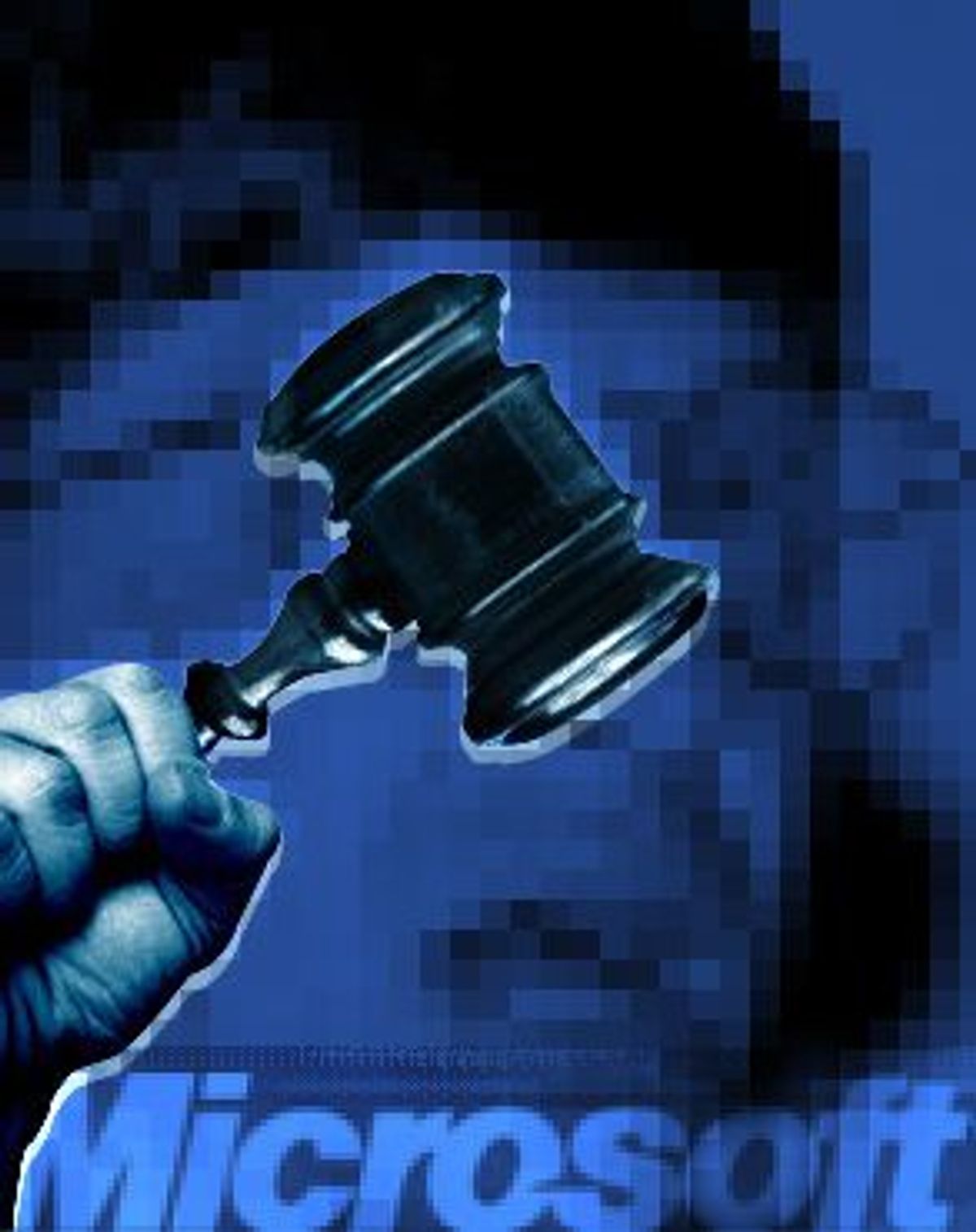 Microsoft's legal team is a lucky bunch. First, its four-year antitrust battle with the government, which had once seemed so bleak, now looks like a victory. Second, the company has now been hit with a raft of private antitrust suits, guaranteeing the outside lawyers lots of billable hours and the inside lawyers job security for years to come.

So far, Netscape, Sun Microsystems and Be Inc. have all sued the software behemoth, alleging that they suffered from the wrongdoing so thoroughly documented in the government's case. Other competitors, sensing an easy victory, will likely follow suit.

While this may seem like just a legal pile-on -- literally the last chance for Be to make a buck, before vanishing forever -- the results may be far-reaching, and will especially affect technology-minded consumers. Microsoft has for years now used its monopoly power to quash competitors and promote its own products. Its stranglehold has sapped innovation from the industry and robbed consumers of the benefits of a competitive market. Indeed, Netscape's business has been nearly eviscerated by Microsoft's actions. Sun's Java, an exciting technology that has survived thus far, may nonetheless meet a similarly dire fate at the hands of Microsoft's just-launched .Net.

The government's case now looks like it will do little or nothing to curtail these wrongs. Chances of success for the private suits are also slim, but there is at least a possibility that they may indeed lead to stronger penalties and fairer markets. Regardless, consumers ought to applaud these actions, insofar as they seek remedies that the government has failed to pursue.

The lawsuits will get a boost from the government's case. The findings in that case -- documented in the court's findings of fact and conclusions of law -- will give the private suits a solid foundation, skewed strongly against Microsoft.

But the findings are only the foundation on which each of the plaintiffs hopes to build broader charges than the government was able to prove. For instance, both Netscape and Sun assert that Microsoft illegally monopolized the market for Internet browsers. The government's similar claim (of "attempted monopolization") was rejected by the Court of Appeals, which said the Department of Justice hadn't even defined the browser market.

Proving these and other charges will require some work. In addition, the standards for private antitrust suits are different enough that, even where the charges overlap with the government's, these will be far from simple victories. For starters, while the government showed that Microsoft's behavior reduced competition in certain markets, the private plaintiffs must further show that they specifically were harmed by that behavior. It can happen that a monopolist, in reducing competition overall, may actually benefit certain competitors.

This means that Netscape and Sun will eventually have to show that they would have been successful -- or, at least, more successful than they were -- but for Microsoft's illegal behavior. This makes a maddeningly speculative question suddenly critical: Was Netscape actually harmed? Would it have failed anyway?

It's impossible to know with certainty, of course. But it does seem clear that Microsoft damaged Sun and Netscape's businesses through aggressive and illegal tactics. The question remains: Will Microsoft pay a price for its behavior?

The symptoms of Netscape's suffering are obvious: By Microsoft's own estimate, Netscape controlled 80 percent of the browser market as late as 1997; today, it has only 20 percent. Importantly, Netscape's share didn't drop so dramatically because its products were inferior or overpriced. Indeed, it probably wouldn't have lost market share even if its product had been inferior. "Netscape" had become popularly synonymous with "Internet," and consumers -- perhaps schooled by Microsoft's years of pushing the "industry standard" against upstarts like Apple -- wanted to stick with the market leader. Even Bill Gates acknowledged: "[quality] alone won't get people to switch away from Netscape."

The real migration to Internet Explorer started only after Microsoft played its trump card, and used its operating-system monopoly to close off Netscape's two most effective and cost-efficient distribution channels: original equipment manufacturers (OEMs) like Dell and Compaq; and Internet access providers such as AOL. The Microsoft executive in charge of operating systems, James Allchin, pushed this strategy, arguing "we must leverage Windows more."

OEMs offered particularly effective distribution, as they could simply install Netscape's browser on every machine they shipped. Microsoft fought back by bullying these OEMs into exclusively distributing Internet Explorer. While some of the company's tactics were simply questionable -- such as offering Windows-licensing discounts to cooperative OEMS -- others smacked of thuggery. For instance, Microsoft threatened to audit Gateway's internal use of Microsoft products if the computer maker wouldn't abandon Netscape Navigator.

Microsoft used similar methods to foreclose distribution by Internet access providers, for instance by facilitating user sign-ups for only those ISPs that would exclusively promote Internet Explorer. Recognizing that theirs was a commodity product, few ISPs could afford to leave to their competitors the visibility and convenience of appearing on the Windows desktop. Indeed, even AOL -- whose proprietary service was and is unique, and which now owns Netscape -- eventually signed up with Internet Explorer in exchange for a spot on Microsoft's desktop.

The tactics worked: Internet Explorer dramatically gained market share at Netscape's expense and, importantly, Netscape's distribution costs skyrocketed. But were these tactics and the others alleged in the suit entirely responsible for Netscape's failure? Might not the company have failed anyhow, as did so many of its bubble-market contemporaries?

Sure. Netscape shared a lot with those now-failed "businesses": arrogance, ungrounded optimism, a 20-something co-founder and nearly uncontrolled growth. Those negatives could easily have conspired to bring down the company. Netscape certainly seems to have stumbled badly and to have made several mistakes, such as choosing to rewrite its browser from scratch just when it faced real competition. That process turned into something of a debacle and led to an almost three-year wait, during which Microsoft raced ahead. Missteps like that suggest that the stock market's manic expectations may never have been met.

But there were important differences between Netscape and the dot-coms. For starters, the company enjoyed real revenue (over $500 million in 1997) from browser licenses, Netcenter portal advertising and sales of server software and development tools. Without Microsoft's illegal interference, those streams likely would have grown and may well have led to additional sources of income.

The company's management should be credited not just for those revenues, but also for being savvy enough to sell the company to AOL for $4.3 billion in 1998 -- not at the peak of the market, but well above what the company would sell for today. Even if AOL hasn't turned out to be the best corporate parent, it was a smart move that brought Netscape into an environment with stable revenue and little direct competition from Microsoft.

If the company had survived on its own and executed its original plans, the rewards could have been immense. Its products, already must-haves, might have grown into a development platform able to support full-fledged applications. That, after all, was Microsoft's fear: that Netscape would lure developers (and thus users too) from the operating system to the browser. Had it succeeded, Netscape might well have found itself in the same lucrative position Microsoft owns today and has fought so vigorously to protect.

This is, admittedly, a speculative future. For one thing, Netscape's products were far from being able to host sophisticated applications. Sun's Java was much closer to this goal, and actually might have ended up competing with both Netscape's browser and Microsoft's operating systems. We simply don't know how the markets would have progressed absent Microsoft's wrongdoing. But this lack of certainty is not reason enough to let Microsoft off the hook. If it were, that would only encourage monopolists to strike at their competitors earlier and more fiercely.

It is obvious that these companies were damaged by Microsoft's anti-competitive actions. But what should be done about it?

The companies want money, of course, though they haven't yet said how much. While Sun did reportedly estimate that its tab alone could exceed $1 billion, such figures are based on little more than guesswork. What is an unknown chance of owning a rapidly changing market really worth?

There are ways to value such uncertainties -- investors use various formulas to price speculative securities such as options -- but for all their precision, they typically boil down to a number of judgment calls. In any case, they're likely to receive only nominal use here: Because these cases are all jury trials, the lawyers are likely hoping simply that the awards, if any, will be based less on formulas than on emotion.

Unfortunately, monetary damages won't likely be an effective remedy because Microsoft has a $36 billion cash hoard with which to easily pay any but the most severe penalty. Furthermore, it is unclear whether such awards would accomplish much in the public interest. You could even argue that an award to Netscape, now part of AOL Time Warner, might even be an overall negative, at least for technology-minded consumers, because it would transfer cash from the technology industry to a media company.

In addition to cash, all of the private suits ask the courts to impose so-called conduct remedies that would restrict Microsoft's future behavior. Interestingly, Microsoft will likely contend that its conduct has already been remedied by the settlement of the government's antitrust case -- even though that judgment is poorly drafted and unlikely to produce meaningful change. That is one reason why the suits allege wrongdoing beyond what the government was able to prove in its case: Microsoft cannot reasonably claim to have settled claims excluded from that case.

Because Sun Microsystems' lawsuit is much broader and more ambitious than the others, it could produce the most dramatic regulations. Still, any additional regulation could create a serious burden for Microsoft if it conflicted with remedies already imposed by the government's settlement (or by the European Union, which is pursuing a similar case against the company). A patchwork of remedies imposed by various courts could well produce confusing or contradictory regulations.

Indeed, it's worth questioning if any conduct prohibitions, no matter how well coordinated, could actually reform Microsoft and restore competition to the marketplace. It may be that Microsoft could weasel its way through any but the tightest regulatory nets; and regulation so severe might only force the company to stagnate, with little or no benefit to the overall market.

A so-called "structural remedy" -- a breakup -- would likely have been more effective. It would have replaced Microsoft with a pair of smaller but still strong companies, in a market suddenly open to competition. The collusion between operating systems and applications development that has long fortified Microsoft's monopoly would be erased. Unfortunately, the government declined to pursue such a breakup and instead opted merely to slap Microsoft's wrist. With these private actions, perhaps the company will at least get a spanking.

Second of a two-part series on the legal battle between Netscape and Microsoft. Read Part 1.

J.J. Gifford is a writer and consultant in New York.