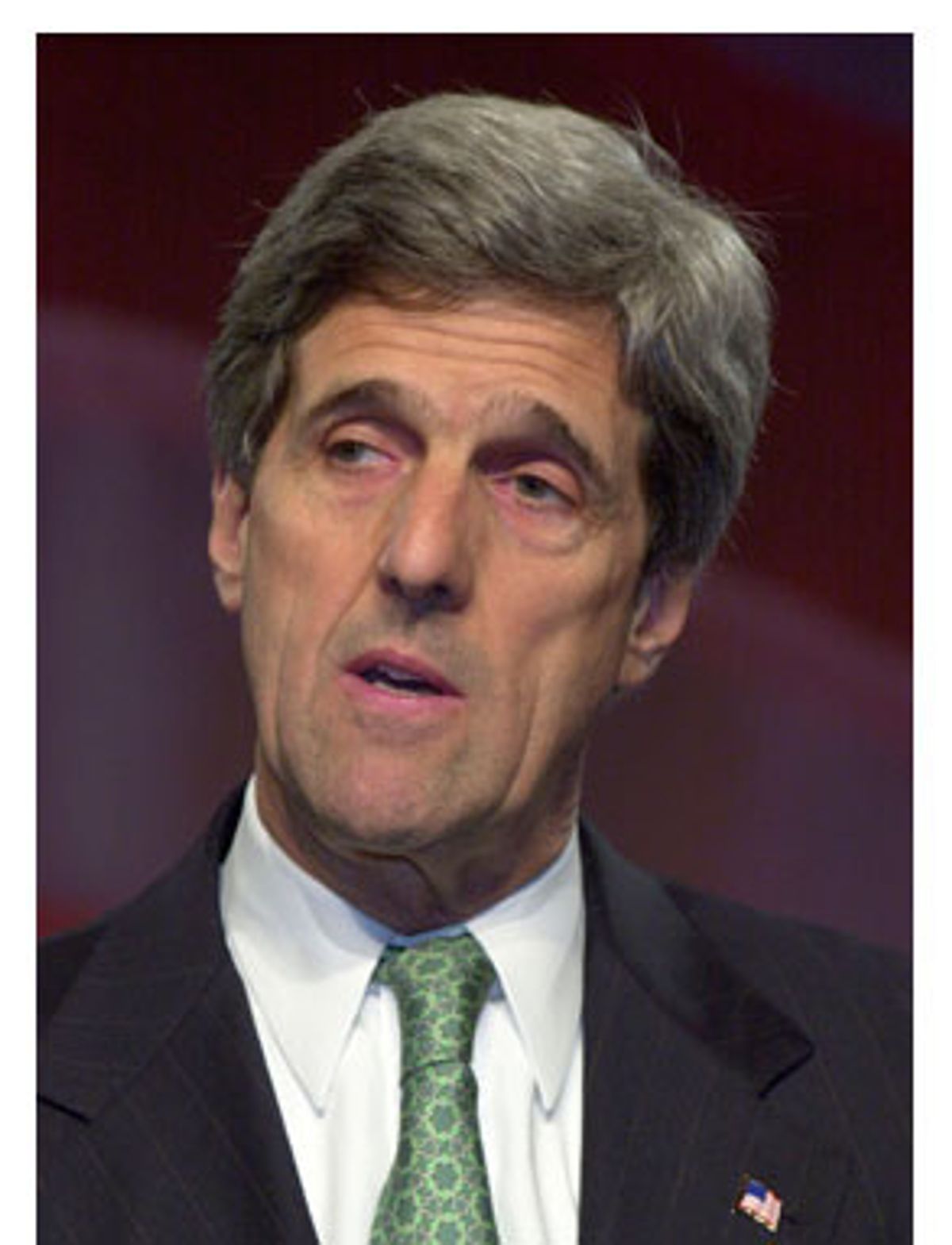 While the Senate defeated his proposal last week to dramatically increase fuel efficiency, or CAFE, standards on all cars, Sen. John Kerry, D-Mass., also could consider it a victory of sorts.

Few had given it any real chance of passing, but it forced the auto industry to unleash a series of newspaper, radio and television ads claiming the proposal, co-sponsored by Kerry and Sen. John McCain, R-Ariz., was downright un-American. "Imagine climbing an icy mountain, towing your snowmobile, but instead of driving a pickup or an SUV, you're driving a compact car," said one newspaper ad. "That's what you could be forced to do, if some U.S. senators get their way."

Labor unions objected, too. The United Auto Workers argued that, since American cars and trucks lag behind foreign imports in terms of fuel efficiency, "the Big Three would have to increase their fuel economy by 40-50 percent compared to less than a 15 percent increase for Honda. The net result is the Big Three could be forced to curtail production of larger vehicles, resulting in serious jobs loss for UAW members and other workers," according to a recent UAW statement.

Senate opponents got in on the action too, with Sen. Trent Lott, R-Miss., saying the proposal would force him to drive a clown car with his knees tucked under his chin, and Sen. Barbara Mikulski, D-Md., claiming "the functional civilian equivalent of a Humvee" was necessary to protect soccer moms from violence brought on by road rage.

But for Kerry, a likely presidential contender in 2004, it allowed him to further establish himself as a lead critic of the Bush energy plan, and to bolster his credentials with environmentalists, a key Democratic voting bloc.

Salon spoke with Kerry via telephone Friday afternoon about his failed bill, and his concerns about a "lack of leadership" on energy policy.

Were you surprised by the Senate's actions last week?

We knew we were going to lose. It was not a situation where we expected victory, but I think the intensity and the amount of money spent by the industry was beyond any anticipation. Sometimes, in the Senate, you have to get a benchmark starting point, and you lose a few times before you can win. Campaign finance is a classic example of that.

I was disappointed in the silliness of some of their arguments and the scare tactics that they used, which worked but have no relationship to the real world we're living in, and that's very disappointing for the United States Senate, and I think for the country. But in the end, it's a battle we lost; we're going to win the war. We are going to have the technologies, we are going to push the issue, and we're going to ultimately wind up with almost every car in America easily able to meet a higher standard.

Did you sense any change in the tenor of the debate, or in the public interest in the issue, this year as opposed to years past?

Not in the public. The public wants this. The intensity was the expenditure [of] money to prevent something the public wants from happening by creating a phony consequence to the public. It was very similar to the Harry and Louise ads of the healthcare debate [in the early 1990s] -- extraordinarily similar. [Nearly 90] percent of America believes we should raise the fuel standards of CAFE, 9 percent are opposed. We haven't seen the numbers [of what the industry spent], but they were running very personalized ads in farm states and the South, in states where senators might have been inclined to embrace an environmental vote, and it worked. \

The measure that passed calls on the Department of Transportation to issue recommendations within two years regarding fuel standards. Are you optimistic that the study will actually lead to an increase in the standards?

I believe it's possible that we could get some level. It will be de minimis, and it will be what the industry basically writes and accepts. It's not going to push the industry, I don't have any high expectations for that. That will be in 24 months, and I'm sure if they don't like what's happening, they'll sue and delay and do other things. I think that in the meantime, it's possible that we could have some technological developments that begin to move the process anyway. I am convinced that the debate itself and the requirement that they had to spend money to beat it now is a clear warning signal. It's really its own kind of victory because they know it won't go away, they know it's a serious question, and they know that the Japanese and Germans will continue to compete and push them on it. So, they're really going to have to face the realities of it, and I think they will to some degree. The question is really how far and how fast.

I believe this is a very important issue. This is part of a larger vision about the environment, and energy. Energy is the environment, and it's really part of a measure of how people see the world. It's a combination -- it's a national security issue, it's a health issue, it's an energy policy issue and it's an environment issue. All of the above. And it's really even a foreign policy, international affairs issue, because it has something to do with our own relationship with other countries, as to how they view our seriousness, our bona fides, on these issues. Both the less-developed countries and European countries.

What do you make of the argument that your proposal would put American car companies at a competitive disadvantage?

I don't agree with that. I think it would have made them more competitive, because we were giving them a tax credit that would have really cushioned the cost of the vehicle. We were willing to do a production credit, even. The fact is that the industry had an opportunity here to cut an agreement that would have been enormously beneficial to them, and they weren't even willing to negotiate. When the industry was asked, can you even do one mile per gallon over the next 15 years, they wouldn't even agree to that. So, the fact is, they really just wanted to stonewall, and that's where we are. But we'll go on. We're going to win this in the long run.

Is this issue dead for the year?

I think so. I do not expect anything else on that standard in this particular energy bill fight.

How does this affect the rest of the energy debate?

It has a great deal of effect in my judgment. It's part of the administration's oil-based, industry-based status quo approach to what is a very serious national security/environmental/energy set of choices.

We would have saved every day over the next years -- not waiting for the peak production of ANWR -- but each year we'd be saving more and more fuel than we import from the Persian Gulf ... I just think that those are the questions. I think the country really hasn't had it put to them as directly as a national security issue. That's partly the lack of leadership regarding it.