Video-game music remixers turn bleeps and bloops into everything from Swedish death metal to hillbilly pickin'. 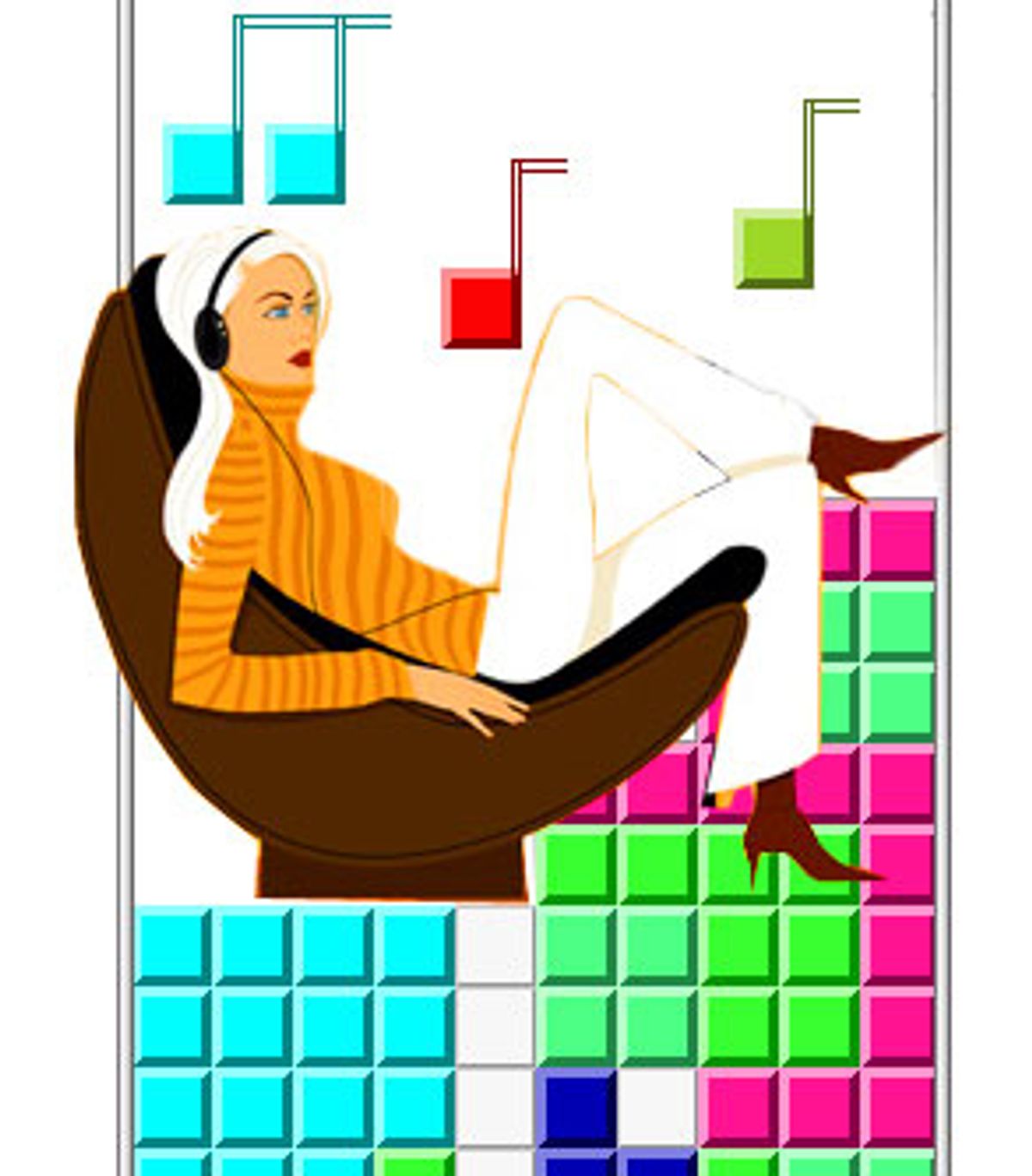 One night in February, Dale North, 25, and Sean "Ailsean" Stone, 24, were playing Scrabble on Games.com, when suddenly they were recognized by their fans.

A chat message flashed across Stone's monitor. Wow! Are you the real Ailsean?

Stone was flattered, although surprised. "Yeah," he responded. "Why on earth would someone impersonate a little-known musician whose SMALL amount of fame comes from remixing video game music?"

Stone and North are microstars in an only-on-the-Net subculture: video-game music remixing. Remixers take the original tune, melody, chord progression or rhythm of a video-game song and reinvent it.

North produces lush orchestral and symphonic arrangements inspired by tunes from the likes of MegaMan 3. He lives in Bentonville, Ark., where he works at Walmart corporate headquarters handling merchandise samples. Stone, aka Ailsean, hailed as "the Metallica of game remixing" by one admiring peer, is known for his heavy-metal riffs inspired by the music of the Legend of Zelda and Final Fantasy. Stone teaches guitar in Alton, Ill.

Remixers take the video-game music drilled into their brains by countless hours of obsessive gaming and reorganize it for their own purposes. Those familiar bleeps and blips reemerge in elaborate orchestral numbers, jazz, techno, ska, funk, hip-hop, even Swedish death metal. It's one way to get those haunting tunes out of your head -- recast them in your homegrown musical score.

Remixers upload their musical styling to sites like OverClocked ReMix and VGMix, where fans review their songs. Remixers also hold contests in which they compete to do the best arrangement of a specific video-game tune. A forthcoming CD will collect arrangements paying tribute to the music of the Final Fantasy video-game series.

Remixers tend to be young guys, in their teens or early 20s, who are lifelong gamers. "We grew up with this stuff," says Jake Kaufman, 20, of Seattle, one of the creators of the VGMix site. "When you play games as much as we do, a lot of the exposure to music that you get is from these video games."

But video-game music fandom isn't merely a geeky subculture. Some name brand musicians have composed for game soundtracks -- Nine Inch Nails' theme for Quake I may be the most famous. And in at least one country, Japan, video-game music is taken quite seriously. There, it's sold in CD soundtracks, which hit the pop charts, just like blockbuster movie soundtracks. That's not yet true in the United States, but as video gaming continues to increase its cultural and financial clout, video-game music will only become more important. Someday soon, the theme from Grand Theft Auto 3 is going to hit the Top 40 in the United States, and a hot salsa remix will no doubt be on the Net soon after.

While a bug-eyed gamer is busy murdering aliens or guiding his frog to safety, he may also be developing a lasting attachment to some of those rudimentary ditties playing in the background of his fun. "What kid hasn't walked around with the Super Mario Brothers theme stuck in his head for a week?" says Stone.

That single game has inspired innumerable tributes, including an orchestral version and an '80s pop anthem.

It's nostalgic, a little wistful even, to hear that Russian folk song from Tetris that you couldn't excise from your subconscious for years, reborn as oversynthesized techno. Still, remixers have a tough time explaining their obsession to outsiders. As a truculent line on the VGMix site warns: "If you need to ask why we arrange game music, you probably should not be here." But North gives it a shot: "I kind of look at it like a film score," he says. "Some people enjoy the music in the movie, but will never listen to it again. But some people will run to the store afterward and buy the CD." Yes, but how many movie soundtrack buffs hear a fledgling hip-hop tune trapped in the theme song from "Titanic" that must be liberated?

For most remixers, making music inspired by video games is a hobby. To get started, it requires little more than a PC and tracking software that lets users sequence various instrument sounds.

But many of these hobbyists have a secret dream: to get paid to write their own music for actual video games one day. "One of us is going to get the first Grammy for a video game!" says Mustin, 21, of Fayetteville, Ark. Mustin explains that he has only one name, just like Prince or Madonna. He's among the remixers on the forthcoming "Project Majestic Mix" CD, which celebrates the music of Nobuo Uematsu, who composed the soundtrack for the Final Fantasy series. Kaufman of VGMix is one of the few remixers who already does write music for video games for a living; his titles include Who Wants to Be a Millionaire, Second Edition, and Disney's Atlantis.

The term "remixes" is actually something of a misnomer, but it's the word that's stuck. What most remixers really do might be better called an arrangement, reworking some aspect of the video game's original soundtrack in an entirely new musical style or genre. In fact, as the VGMix site attests: "Actual remixes of game music are usually looked down upon in our community, as most of the art of game arrangements is in interpreting the ideas and themes completely from scratch." Plus, a literal remix that relies heavily on the original audio from a video game risks inviting a letter from game company lawyers.

Still, one might wonder whether the audio from many early games really qualifies as songs, much less art that can be ripped off. The technical limitations of early game consoles such as the Nintendo and Commodore 64 imposed serious restrictions on creativity.

"The systems didn't have as good sound processors. The composers were very talented, but they had limited resources -- little more than bleeps and bloops," says David "Djpretzel" Lloyd, 23, the webmaster of OverClocked ReMix who's just finishing his 50th remix, including this hillbilly tribute to the music of Bubble Bobble.

Yet, those early video-game "composers" with their repetitive jingles did make an impression. "More people can hum the Super Mario Brothers theme than can hum the national anthem, but not a lot of people appreciate it as a piece of music," says Kaufman.

It's tough when the genre that your derivative art leeches off of doesn't even get any respect. But it is the older games that inspire some of the most devoted remix tributes, perhaps because their bare-bones music leaves the most room for an arranger's interpretation. Remixers haunt sites like C64audio, Zophar's Domain and Retrogames to hear the old tunes and play the old games to get inspired.

Today, more powerful consoles such as the Xbox and PlayStation, as well as souped-up personal computers, have made possible games with lavish soundtracks. It's an important part of the gaming experience. If a gamer is going to spend umpteen million hours playing Warcraft III or Half-Life, the music better be good. This gives remixers hope that the video-game music that haunts them will one day be taken at least as seriously as movie soundtracks are. That's already true in Japan.

"There are Japanese composers out there who have entire fan followings to the degree that pop stars do in the U.S.," says Kaufman. Final Fantasy's Uematsu is one such artist, inspiring fan sites, as is Koji Kondo, the composer behind the music of the Legend of Zelda games. But their works can only be bought in the U.S. as imports; the CDs are often spotted for sale at sci-fi conventions.

In Japan, says Kaufman, the video-game music market is serious enough that he knows of remixers who have received cease-and-desist letters from game companies. The companies that own the games sometimes commission their own official arrangements of the songs, which they sell, along with the soundtracks to the original games.

But in the U.S. and on the Net, remixing remains in the realm of do-it-yourself fandom, where old gamers go to hear their personal video-game Top 40, and to write new ones themselves. Says Lloyd, "In a culture of instant gratification, irony-overkill and disposable art, it's sort of quaint and comforting that people still remember these parts of their past, and find ways of creatively re-creating these songs today."