Karl Auerbach, elected to the Internet domain-name authority with a mandate from the people, explains why he is suing his own organization. 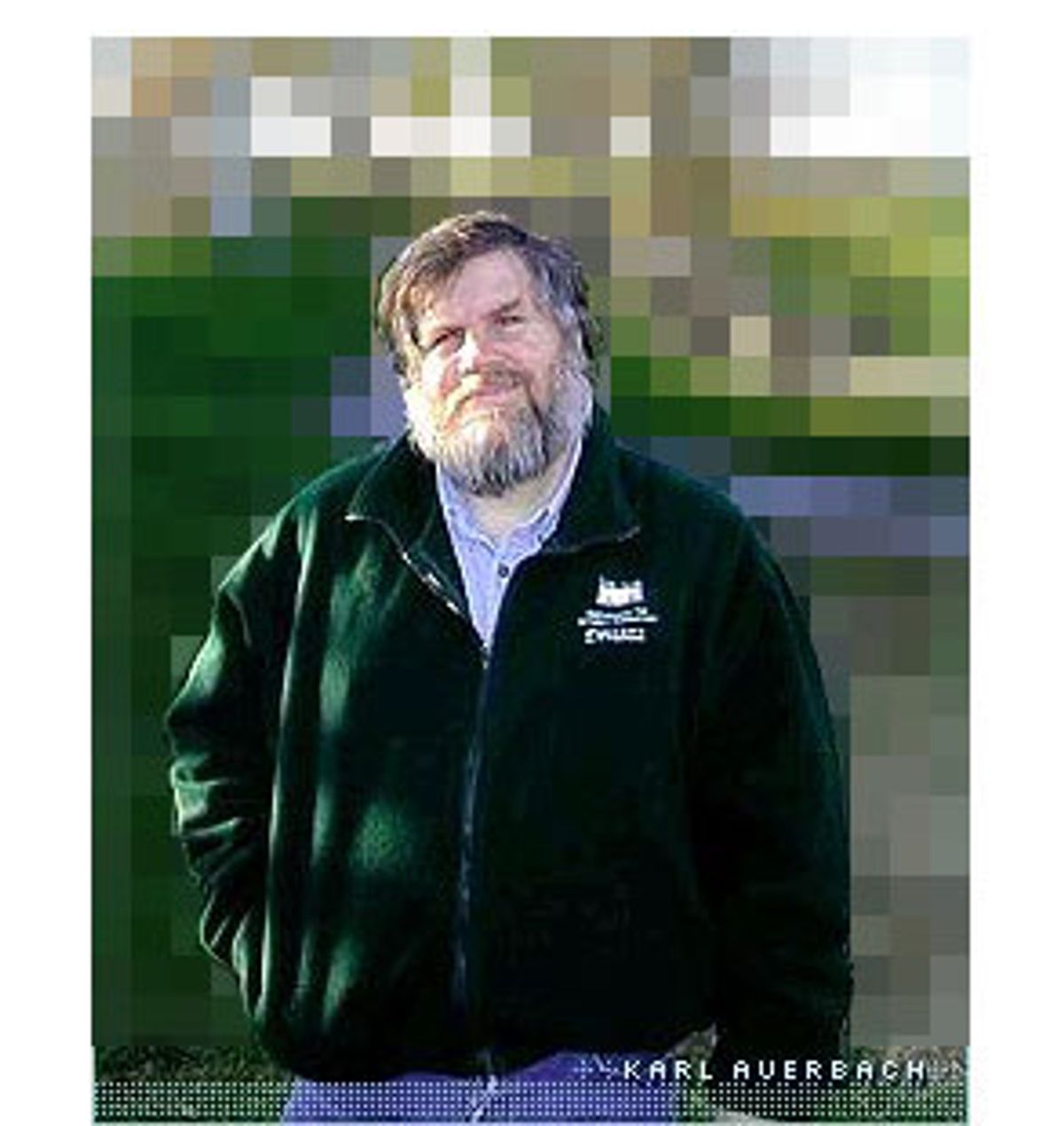 Karl Auerbach began his tenure at ICANN, the Internet Corporation for Assigned Names and Numbers, with a mild sense of optimism. By the time he joined the board of directors in November 2000, the nonprofit -- the controlling authority over the allocation and administration of Internet domain names -- had already earned a reputation for ineptitude and closed-door policies that favor corporate interests. But as one of five board members (out of 19) elected at large by the general public, Auerbach intended to guide ICANN toward reform.

Auerbach's hopes have not been realized. In February, ICANN CEO and president M. Stuart Lynn proposed a massive overhaul of the organization -- a shift of power away from public input toward national governments. At a meeting in Accra, Ghana, last week, ICANN agreed to go along, suspending at-large elections until further notice.

Auerbach -- a founder of several software companies who also spent time protesting the Vietnam War -- isn't ready to fold his tent yet, however. On Monday, he sued the organization he represents. He filed charges in California Superior Court against ICANN for withholding financial information in violation of a state law that gives directors "the absolute right at any reasonable time to inspect and copy all books, records and documents of every kind."

Salon chatted with Auerbach about the case and other ICANN-related matters.

You've been trying to see ICANN's financial records for a while. What led you to file a lawsuit?

I made my first request to see the financials within five minutes of my election to the board. ... I submitted written requests. They went off and hemmed and hawed and said they'd have to write procedures and send it to such-and-such committees. ICANN has a committee structure that makes the U.S. government look simple.

But nothing happened and I wrote more letters. Then, eventually, finally, around September, I get, out of the blue, this set of procedures, which Stuart Lynn simply declared by fiat to be applicable to all directors.

What were the procedures and why didn't you comply?

No. 1, they were unlawful in that they put conditions on me, which impaired my ability to make independent judgments. I essentially have to ask the approval of management to see certain documents. They go cogitate and then tell me whether I can see them. And they place conditions on my use of that material. They call it a nondisclosure, but it really amounts to conditional use.

So there are two parts to this: First, I'd have to sign the general agreement; then there would be additional conditions when I showed up at the door. To do this would be to abrogate my duties as a director. It would be contrary to my duty as a director to sign the agreement.

And what's really interesting is that through all of this process -- with Stuart piling more and more procedures on me -- he responded, out of the blue, to one of my requests. It was a request for fairly innocuous information -- I wanted the logs of international travel of all officers and executives for all international travel not pertaining to a board meeting -- but nevertheless he felt free to dispense with all of these procedures [and give me the logs] with just the wave of his hand. So he's playing fast and loose with these procedures.

What are you hoping to achieve with the suit?

I want to look at the records because I want to make better decisions. Part of Stuart's reorganization plan is inspired by the fact that ICANN is running out of money and needs cash. So I want to know where the cash is going. All I've seen are broad public statements and, to my eyeballs, they're very deficient. And I want to understand the conflicts of interest. I've seen signs that there are conflicts of interest at Jones, Day [the Washington law firm retained by ICANN] and elsewhere and I want to know the details.

What's going on is that we have the classical tension between managers and directors. This has been going on at corporations ever since they've existed. But at ICANN we have a passive board and an activist management who seem to want to be building an empire.

Some folks just don't get the notion that directors are there to oversee the corporation. ICANN's management seems to consider the board as a kind of rubber stamp to be used to approve management's fait accomplis.

I guess that some folks just haven't learned from Enron. My own sense is that this lack of director responsibility is mirroring the crisis in corporate accounting as shown by Andersen in the Enron situation.

In corporations, especially nonprofits and tax-exempts like ICANN, the public interest is often protected only through the vehicle of active, inquiring directors. As directors become lax and lazy, or in ICANN's case, as corporate management imposes unlawful limitations on directors that the directors accept, then the corporation becomes unaccountable and the public loses.

Look at Lynn's reform plan. His response to ICANN not having enough money is to build an ICANN that has 10 times the budget.

But Lynn is arguing that he's trying to streamline the organization and make it more effective -- goals that you share.

Yes, but his budget went up tenfold. It went from a couple million to $23 million. And it's virtually all staff people. So even if you give $250,000 per person per year, we're talking about 100 people. It's already too large with 20 people. I mean, what are they doing? ICANN's job is supposed to be narrow and technical. And here it is, 20 people? What in the world are they doing? It's inconceivable.

That's why I want to look at the records, to find out where the money goes. Why does it take $2.4 million (47 applicants paid $50,000 each) to evaluate seven top-level domains?

What do you make of ICANN's decision to suspend at-large elections -- the format that put you on the board?

I'm just appalled at the at-large study committee, which came back and said, "Oh, well, this is an improvement for the at-large community because they can organize." Well, we've always had the ability to organize so-called garden clubs of comment. It's the lack of the vote that matters. This is something that ICANN has promised Congress, promised the public, ever since its inception. Now, it's gone back on its promise.

But there were serious problems with the last election. Countries like China, for example, pounded the servers in what appears to have been an attempt to stuff the ballot box.

There were large problems with the U.S. election, but we didn't tear down the U.S. and rewrite the Constitution, did we?

What kinds of alternatives are you offering? How do you think some of the problems, particularly with fraud, should be fixed?

First, get rid of management. Here are people whose primary belief is that elections will never work, therefore they don't try. There's a lack of will here. Also, we don't have to have electronic elections. We can have good old paper elections, the kind that work for all kinds of nonprofits all over the world. You send people an envelope, they fill out the paper and send it back.

Why do you think these kinds of things aren't being considered?

Because it gets in their way of building an empire. A lot of people really get excited by having a huge organization chart with them at the top, and with lots of money to spend. And that's what ICANN is turning into -- bureaucracy upon bureaucracy.

Do you think the removal of at-large elections is the biggest flaw with Lynn's proposal? What other problems do you have with the plan?

The repudiation of public participation is the most egregious part. The imposition of the nominating committees [under Lynn's plan, five members of ICANN's board would be chosen by the organization's internal committees] is just awful because it creates a self-perpetuating organization in which the insiders determine who will be let in. It's very much like the College of Cardinals in Rome, who are not going to let a Protestant become pope.

As far as finances go, the thing is just naive. Here he is asking governments to pay. Who in the U.S. has been the most vociferous opponent to ICANN at the federal level? Congress. If anybody at ICANN would bother to read something simple, like the U.S. Constitution, they'd recognize that funds have to be approved by Congress; the executive branch doesn't print money and spend it. If someone's going to pay ICANN, it's going to have to be passed by Congress. And that certainly gives Congress a much stronger level to exert control.

And how are you going to get governments to agree? Governments are required, under the Lynn plan, to gather into clubs and select someone. But now, according to a recent clarification, they have to select from a list prepared by this council -- and then pay for the privilege.

Is there anything in the plan that's useful?

I think it would make great kindling for a fire. There's nothing in it that's useful.