Today's GOP demonizes any dissent, but one of its most influential forebears openly criticized WWII plans -- and just 12 days after Pearl Harbor. 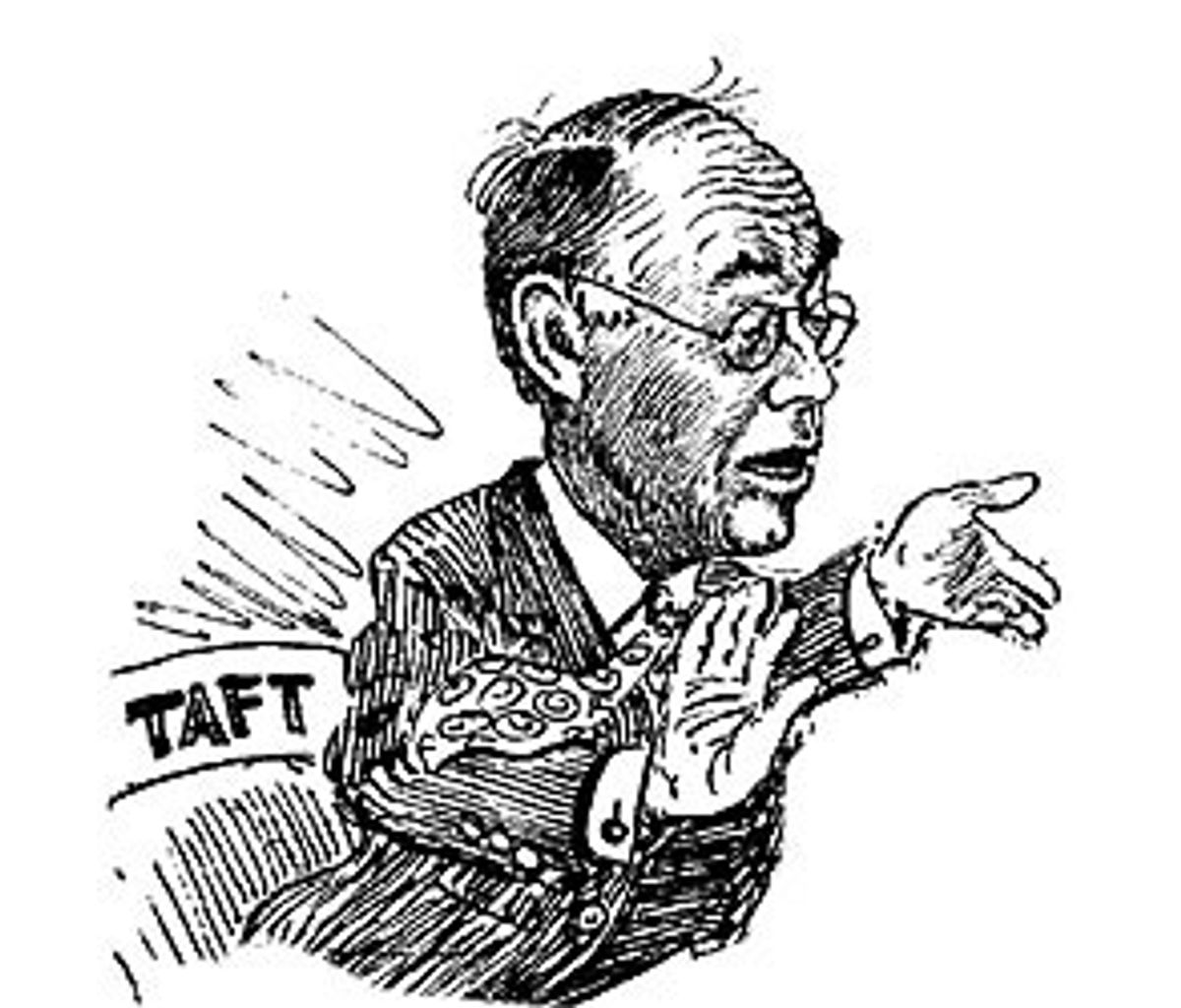 When Senate Majority Leader Tom Daschle said on Feb. 28 that Democrats would start "to ask the tough questions" about President Bush's war strategy, Republicans reacted predictably. Trent Lott accused Daschle of "trying to divide the country." Tom DeLay issued a one-word press release: "Disgusting." Bill Frist, the Tennessee senator who chairs the GOP's senatorial campaign arm, called Daschle's words "thoughtless" and "ill-timed." The charge amounted to something just this side of giving aid and comfort to the enemy.

They've since calmed themselves a bit, but the intensity of their choler raises a fair question: Were Daschle's remarks -- not a formal speech or even a press release, but rather a few sentences in response to some questions toward the end of a press conference that he'd called to discuss other topics -- so shockingly without precedent in American history that those blunt reproaches were deserved? More than that, what does history tell us about the appropriate parameters of loyal opposition after America has been attacked and while U.S. soldiers are at battle?

It turns out there is precedent for Daschle's position. That precedent comes from the aftermath of Pearl Harbor, the most direct analogy in our history to Sept. 11. And it comes, wouldn't you know it, from a Republican. And not just any Republican, but the icon of modern conservatism who was known during his lifetime as "Mr. Republican."

Ohio Sen. Robert A. Taft was a devoted conservative, an adversary of the New Deal, a spirited isolationist and, by 1952, the man whom the right, which harbored grave suspicions about the moderate Eisenhower's internationalist tendencies, was backing for the presidency. While he tended to focus his legislative labors on domestic issues, Taft -- his son and namesake is now Ohio's governor -- had made his isolationist views well known throughout the 1930s, and no GOP leader of the day had greater influence over his party's right wing.

After the attack on Pearl Harbor, the GOP faced pressures similar to those Democrats are under now. There were admonitions not to criticize the sitting administration, and declarations, immediately after the Japanese attack, that politics had to stop at the water's edge. But conservatives had detested Franklin Roosevelt, his New Deal and his foreign policy -- the lend-lease program and the destroyer deal with Britain in particular. And the events of Dec. 7, 1941, seemed to stifle their ability to dissent.

What, then, were they to do? Taft had his answer. He gave a speech to the Executive Club of Chicago arguing that it was precisely the duty of the opposition party to ask the tough questions. He didn't give this speech five and a half months after the attack, as Daschle did (and remember, Daschle didn't even give a speech). He wasn't speaking five weeks after hostilities began, which was how long it took DeLay to blast President Clinton on the war in Kosovo. Taft delivered his speech ... on Dec. 19, 1941!

And quite a direct speech it was. His defense of criticism as patriotism is worth quoting at some length:

"As a matter of general principle, I believe there can be no doubt that criticism in time of war is essential to the maintenance of any kind of democratic government ... too many people desire to suppress criticism simply because they think that it will give some comfort to the enemy to know that there is such criticism. If that comfort makes the enemy feel better for a few moments, they are welcome to it as far as I am concerned, because the maintenance of the right of criticism in the long run will do the country maintaining it a great deal more good than it will do the enemy, and will prevent mistakes which might otherwise occur."

Taft invoked Woodrow Wilson, Oliver Wendell Holmes and Francis Biddle, FDR's attorney general, as defending this right, and argued that "the duties imposed by the Constitution on Senators and Congressmen certainly require that they exercise their own judgment on questions relating to the war."

There was more, a lot more. Debates were raging in Congress at the time -- and, remember, American territory had just been attacked, bodies and wreckage still lay in the harbor, and U.S. soldiers were already in harm's way -- over questions like the conversion of industry to support the war and the best way to expand the draft. Taft weighed in on each, specifically opposing plans the Roosevelt administration had floated ("I see no use in sending boys of nineteen or twenty to war").

At great length Taft argued that the higher defense appropriations Roosevelt was seeking should lead to the end of both Keynesianism (New Deal economists "are confident that a people can spend itself into prosperity") and New Deal programs like the Works Progress Administration. Thus Taft was tying the war to domestic politics in a way that today's Republicans have also carped at Democrats for sometimes doing. Finally, there were shades of renegade Rep. Dan Burton, R-Ind. (who, angered at the administration's secrecy, has threatened the Bush White House with "war"), when Taft called for a congressional investigation into whether Cordell Hull, FDR's secretary of state, had informed Secretary of the Navy Franklin Knox of the contents of his famous Nov. 26 note to the Japanese. The note contained conditions that Hull knew the Japanese would never accept, and the suspicion was rife among Republicans that Hull, and Roosevelt, actually wanted the Navy to be ambushed at Pearl Harbor to stoke war fever among the populace. "Perhaps the fault at Hawaii," Taft said, "was not entirely on the admirals and generals." Mr. Republican, that Dec. 19, minced few words.

And his fellow Republicans got the message. According to historian Richard Darilek in "A Loyal Opposition in Time of War" (1976), Republicans entered 1942 ready to fight the administration head-on. Wendell Wilkie, the party's nominal leader, was an interventionist, but in a bid to placate the GOP's isolationist wing he appointed an America Firster named Clarence Boddington Kelland head of public relations for the Republican National Committee. On Jan. 8, Kelland delivered a speech in Salt Lake City on the importance of robust partisanship. Democratic National Committee chairman Ed Flynn countered by cautioning against the election of a hostile Congress. New York Gov. Thomas E. Dewey, who would run against FDR in 1944, warned of the existence within the administration of "an American Cliveden set ... scheming to end the war short of military victory" ("Cliveden set," a reference to the Astor estate in Britain that served as a salon for government ministers, was synonymous with "appeasers"). By the time of the Republican Lincoln Day dinners -- mid-February, just two months after Pearl Harbor -- politics in Washington, Darilek writes, were more or less back to normal.

Two points need to be made about Taft's speech. The first is that he was exactly right to make it. Who can possibly argue with Justice Holmes' statement, the one Taft quoted, that "we do not lose our right to condemn either men or measures because the country is at war"? Well, we know who can, but certainly the vast majority of the American public understands such a right to be a nonnegotiable principle of democracy.

The second is that it's virtually impossible to imagine a Democrat delivering a similar talk these last months without being labeled a traitor. Republicans have decreed that anything but blind support is beyond the pale, and the major media, in their coverage, have largely absorbed the idea that to criticize Bush on foreign policy is to flirt with signing the death warrants of American soldiers. This makes for a stark, and distressing, contrast with Roosevelt's time.

Taft's speech hardly caused a ripple. If the New York Times covered it at all, it did so in a small enough way to escape my notice as I looked through newspapers from that time. The Washington Post did mention the speech, but only at the tail end of a larger story that was mostly about Hull. In the American political system that existed then, Taft's right to speak his mind on policy was a given, and no high-ranking Roosevelt official launched a major public attack.

But imagine the frenzied spasms of today's Republicans and media if Tom Daschle had emulated Taft: asserting the right to dissent, hinting that Democrats might hold the administration's domestic policy hostage to bipartisan agreement on war aims, and calling -- on Sept. 23! -- for an investigation into why our intelligence agencies didn't know Sept. 11 was coming.

No historical analogy is exact, and some things were true then that aren't now, and vice versa. But the real difference between then and now, of course, is that today's hard right has made an art form of demonizing those who disagree with it and turning legitimate, necessary dissent into insurrectionist treachery. The next time they try that, Democrats should remind Republicans of a time when their own party, and one of their supposed heroes, thought differently.

Michael Tomasky is a political columnist for New York magazine.