For a while, I traded e-mails with a pregnant, terrified 18-year-old. Then she stopped writing, and I'll always wonder. 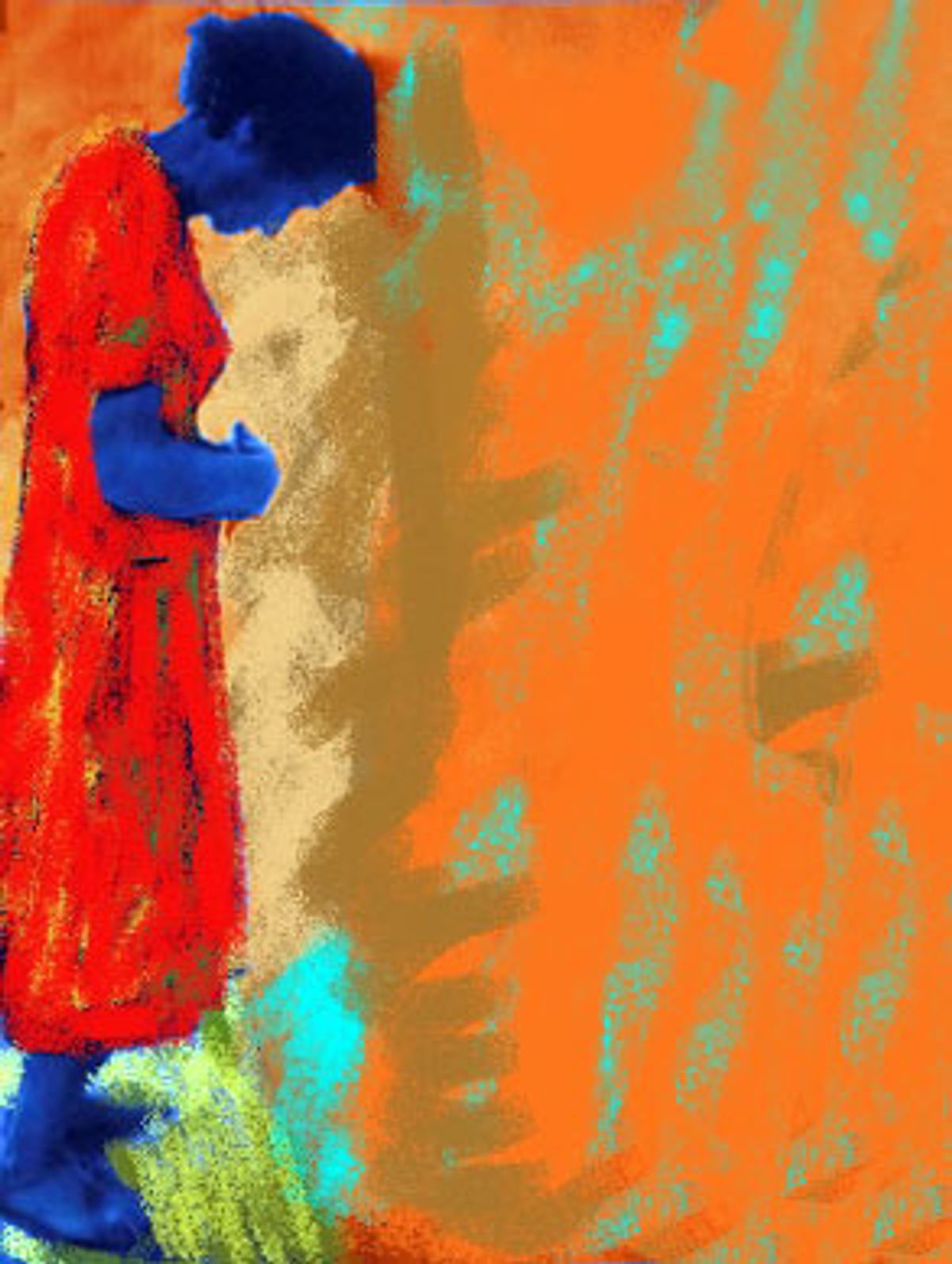 Last autumn, around my seventh week of pregnancy, I roamed the Web searching for palliatives for my mounting morning sickness. I'd already invested in a wrist band, favored by mariners, that pulses a mild shock with metronomic precision. And I'd tried sucking on "Preggie Pops," lavender- and ginger-flavored lollipops that lend one the aspect of an 8-year-old who has just braved a tetanus shot or a raver whose circadian rhythms are off. Neither was very effective.

During my wanderings I found myself on a pregnancy Web site with postings about everything from the now familiar gnawing in my gut to apprehension about amnio to anecdotes about inattentive husbands, stretch marks and unflattering maternity clothes. And then I came across a query from a terrified 18-year-old I'll call Liz. Although she was ostensibly seeking advice about how to quell her debilitating nausea, the subtext screamed more loudly: She did not want to be pregnant.

Liz was writing from a college dorm somewhere in the South. As her prenatal clock kept ticking, she had no idea where to turn. Afraid to confide in her roommate, terrified of her parents, unable to talk to the fellow who'd contributed half the gene pool to the embryo growing in her womb, she had tossed her plaint out to a faceless female claque.

The women who replied gushed with advice and anecdotal remedies -- from ginger tea to wheat thins and oranges -- as well as cheerful exhortations to "hang in there!" until the second trimester. Had the giddy estrogen bath of pregnancy rendered them completely clueless? This girl was panicking. She didn't want to be a mother; her morning sickness was no happy harbinger of better days to come.

Until then, I had never e-mailed anyone I encountered on a message board. My response made no mention of the joys of motherhood and contained no soothing words about how it would all work out. Why would it? Why would a teenager who couldn't even talk to the man with whom she'd had sex suddenly find herself prepared for the most challenging project of her life? But, suddenly and strangely mindful of the zealots depicted in the film "Citizen Ruth," I searched for a way to introduce the "A" word without proselytizing.

I shared with her the fact that I, too, had gotten pregnant while a student at Berkeley, but miscarried before having to take the next step (the abortion was scheduled for the following morning, courtesy of the student health service). "I'm now a couple decades older and thrilled to be pregnant with twins," I wrote. "I think that in the case of both love and motherhood, timing is everything. If this is not the time for you to become a mother, remember that you do have other options." I reminded her that abortion was still safe and legal, and that should she decide not to take this fetus to term, she had many years in which to experience parenthood, perhaps when she had established her place in the world. "I wish you all the best with a truly difficult decision," I concluded, hoping I did not sound glib.

She e-mailed back shortly. "Thank you for your message. I have thought a lot about abortion ... It's kind of funny I used to be one of those people who thought abortion was wrong, but now it seems like the only way. The only problem is finding a place that will do it. Some people say that there [sic] parents will disown them, but in my case they really would ... I could never tell them which means that I could never have the baby. The father and I broke up before I found out, and is now dating someone who used to be my friend. He is 8 years older then [sic] me. I don't know why I dated him. The only reason was because he looks like my favorite celebrity. Which is a great reason to date a person. Thank you for listening to my rabbling [sic], and for not thinking I'm insane for thinking about abortion. You are the only person that I have sent a reply to for this reason. Thank you again."

I suggested she contact her local Planned Parenthood office and try to confide in a friend for support. Assuming she came from a fundamentalist background, I wrote that even in Catholic countries such as France and Italy, women and their doctors were not threatened either by law or by self-anointed, if well-armed, soldiers of God. And I gently suggested, as she had already been suffering from morning sickness for a while, that time was of the essence if she did indeed wish to proceed with termination.

I was a little surprised by how involved I felt after a few exchanges. My husband and a few friends observed that I was an ideal target for a con: Had she asked me for the money? No, she had not. But I would have sent it if she had. When I read Naomi Wolf's book "Misconceptions" (sort of the Edward Gorey guide to pregnancy), I was struck by the effect Wolf's impending motherhood had on her feelings toward abortion (although she did remain pro-choice). My experience has been different. If anything, as I try to imagine going through this process alone, immature and ill-prepared, my passionate desire to procreate seems entirely remote from another's wish to remain childless. I feel fiercely protective of us all.

Liz's next message hinted at her growing paralysis. "I do have some girlfriends, but they are so far away and have mixed filling [sic] that they aren't much help. I can't say anything to my roommate because I have no idea what she would do. I live in a dorm in ... Georgia. So that is one reason my parents disapprove so much. It would be great if you sent me a list of the Planned Parenting place in this area ... if there is one. Thank you."

After calling around for an hour, I sent Liz the phone numbers and addresses for all the offices in her state: Atlanta, Augusta, Liburn, Marietta and Savannah. And at the same time I reminded her that Planned Parenthood was also an excellent resource for birth control, down the road. I felt as if I were talking a cat down from a high, precarious perch, with little faith that it would not panic and fling itself headlong into the light well. I held back revealing too much about the differences in our backgrounds, thinking she might discount me as the kind of wacked-out, godless Californian her parents had taught her would burn in hell. (My own parents would have been mildly shocked had I opted to keep a child at age 18, but would have supported the decision as mine to make. Neither heaven nor hell appeared on their moral relief map.)

I did not hear back for several days. Like someone hoping to spur an indifferent suitor, I could not resist sending a brief, studiously casual, note. "Liz, just wondering if you were able to get through to Planned Parenthood?"

A few more days passed. I sent the e-mail again, as if the first one hadn't gone through. I was becoming as pushy and panicky as a slighted lover. But why was she procrastinating? Didn't she get it? How hard was it to pick up the phone? Then she replied, "I haven't had time to call a place yet. I have been busy with a bunch of homework. This week the teachers hit me with a ton of work, I will let you know when I get hold of a place. Thanks for your concern."

I couldn't write her again, and I didn't want to force her hand. After all, there are plenty of 18-year-olds who do possess the strength, desire and resources to make excellent mothers. She didn't strike me as one of them, but perhaps she was now contemplating adoption, despite her fears of being disowned. It was time for me to back off, and I did.

A few weeks ago I read about a 19-year-old student who bled to death while giving birth in the bathroom stall of her dorm at the University of Wisconsin-Eau Claire. Her baby died at the hospital soon thereafter, and mother and daughter were buried together. "No one, not even a roommate, knew about the pregnancy until the baby was found," authorities said. (Around the same time, during the anniversary of Roe vs. Wade, President Bush reconfirmed his dedication to the "pro-life" agenda and asserted his faith-based belief in the "just say no" school of contraception.)

While reading about the Wisconsin student over morning toast and coffee, I thought about Liz, studying in her Georgia dorm. I never heard from her again. But I wonder, as my formerly flat stomach has morphed into this strange, hard mound that feels as if it contains a pair of wriggling albatrosses, if she is similarly swollen or if she is greeting spring in slinky sundresses and tank tops. As I alternate between being thrilled and terrified of my impending brood -- far from being accidental, the result of in vitro fertilization -- I'm curious to know if she was ever able to talk to her parents? The father? A friend? Did she make a decision, or was it made for her, as the days turned into weeks, and the weeks melted into months? I wanted to drop her a line, but I feel I've worn out my welcome and also lost my nerve. I hope she's OK.

Deborah Bishop is a San Francisco freelance writer. She also is the author of "Hello Midnight: An Insomniac's Literary Bedside Companion."