Marjorie Knoller is guilty of being a loathsome creep. But she isn't guilty of second-degree murder -- and the gays celebrating her conviction are putting tribalism before justice. 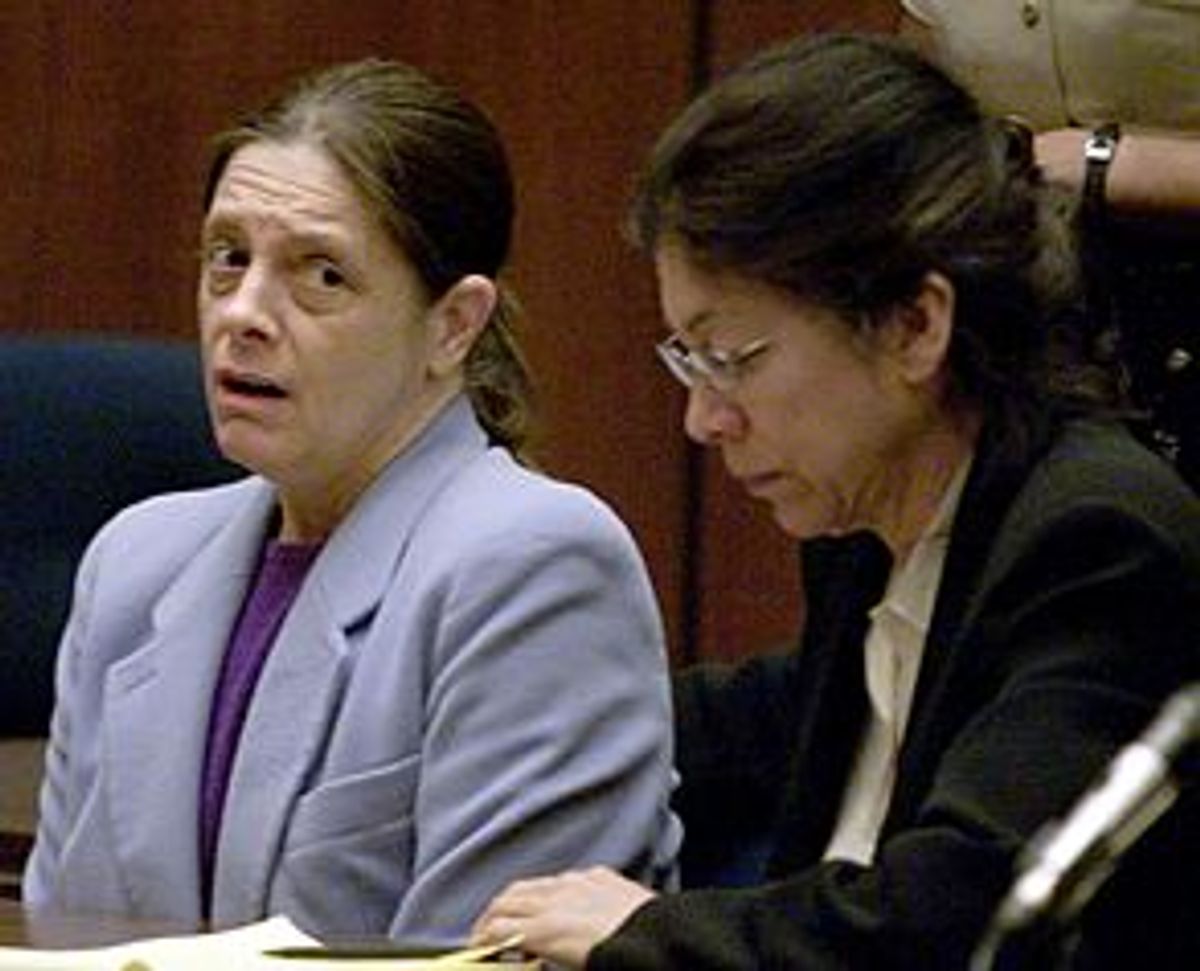 Marjorie Knoller is guilty of so many things: bad judgment in men (from shlumpy sociopath Robert Noel, her husband and co-defendant in the dog-mauling death of Diane Whipple, to white supremacist convict Paul "Cornfed" Schneider, her adopted son, rumored paramour and alleged killer-dog-breeding partner); worse judgment in lawyers (the nutty Nedra Ruiz might be the only San Francisco attorney more reviled than Knoller and Noel, thanks to her theatrics during Knoller's trial); reprehensible callousness in her early statements about Whipple's gruesome death (Knoller played blame-the-victim on "Good Morning America," claiming the athletic lacrosse coach had "ample opportunity" to escape being mauled, and whining "it wasn't my fault"); poor grooming; lousy posture, the list could go on and on.

There's evidence she's also guilty of involuntary manslaughter, for ignoring repeated complaints about the vicious behavior of her two massive apartment-bound Presa Canarios, Bane and Hera, before Bane tore Whipple to shreds in the hallway of their building in January 2001. But there is no way prosecutors proved the "implied malice" necessary to convict Knoller of second-degree murder in Whipple's death -- the first-ever murder conviction in a dog-mauling death in California history. When a Los Angeles jury reached that verdict Thursday, its members were really finding Knoller guilty of her many other misdeeds and offenses -- guilty, essentially, of being a bad person -- and that should disturb anyone who believes the American justice system is supposed to protect the rights of everyone, even the loathsome.

So I shuddered when I saw gay groups around San Francisco cheer Knoller's murder conviction on TV news shows Thursday night. It reminded me a little of the black crowds who cheered O.J. Simpson's acquittal in the bloody murder of his wife and her friend. Notoriously liberal San Francisco is the last bastion of support for the rights of the accused -- in fact District Attorney Terence Hallinan, whose office prosecuted Knoller and Noel to the hilt, is regularly excoriated by the press for being soft on criminals. And gay San Franciscans in particular might normally be expected to show concern for people hated in large measure because of their lifestyle, especially their sexual choices (the city thrilled and recoiled to lurid stories about a romance between Knoller and adoptive son Cornfed, as well as between the defendant and, yes, her dogs.)

But television captured gays applauding the murder verdict, in a disturbing victory of tribalism over justice. Over at San Francisco's Lesbian Gay Bisexual Transgender Community Center, folks held candles while the Knoller verdict was read, and lauded the jurors' decision. "The system worked for a lesbian who was victimized," one advocate told the San Francisco Chronicle. But of course Diane Whipple wasn't victimized for being a lesbian, and it's sad to see her turned into a poster girl for gay rights, at the expense of justice for an admittedly less likable woman charged with murder.

Although last week's Andrea Yates verdict was even more egregious, given Yates' obvious and uncontested mental illness, this one was almost equally questionable from a legal standpoint, and seemed an alarming measure of the tenor of the times: Evildoers will be punished, no matter what the law or the evidence really says. The trial was moved from San Francisco to Los Angeles to help mitigate the effects of the lurid local 24/7 coverage of Whipple's horrific death and the equally repellant lifestyle of Knoller and Noel, but Judge James Warren allowed the prosecution to introduce all kinds of inflammatory evidence about them, from their ties to the Aryan Brotherhood prison gang to their nasty remarks about their neighbors in private letters (Warren mercifully drew the line at evidence of bestiality that prosecutors tried to include).

So Knoller's awful "Good Morning America" appearance was played during the trial, and jurors cited it as evidence of her alleged "malice" toward Whipple. "It was just so out of left field," one juror said. "It showed no remorse." Jurors also expressed their firm conviction that co-defendant Noel, in the words of jury foreman Don Newton, "doesn't seem to be a very nice person."

Newton probably won't get any argument there. The paunchy lawyer bragged that neighbors were afraid of his killer dogs, derided the fearful Whipple in particular as a "timorous little mousy blonde," and seemed to get his rocks off consorting with Aryan lowlifes who allegedly bred the dogs for fighting. Personally, I came away convinced by the evidence that Noel deserved the manslaughter conviction, though I started out thinking it was a stretch to charge him when he wasn't even present at the crime.

But in the end, there was far more evidence that Noel thrilled to the way the dogs intimidated neighbors than that Knoller did -- yet she's the one in danger of spending her life in prison, unless her conviction is overturned on appeal, as many attorneys believe it will be. It's hard to see how she was convicted of second degree murder, which, according to jury instructions, required a finding that Knoller intentionally committed an act she knew endangered human life, with "conscious disregard" for that danger. I don't think prosecutors proved that.

Certainly there are plenty of gay people who think the Knoller murder verdict was overkill, just as there were plenty of African-Americans who thought O.J. was guilty as sin. But when a case as complex as this one gets caught in the tangle of identity politics, truth and justice go out the window, and power is all that matters: Diane Whipple must be avenged. But while Whipple was by all accounts a wonderful person, a terrific college lacrosse coach, devoted daughter, and loving partner to her companion of 13 years, Sharon Smith, she was not Matthew Shepard, or Harvey Milk (the legendary gay San Francisco supervisor murdered by conservative rival Dan White in 1978). There is no evidence that Whipple was killed for being gay, or that her death was in danger of being ignored because of her sexual orientation.

Of course, it wasn't just gay folks who wanted to see Noel and Knoller hang: Many of their Pacific Heights neighbors cheered the verdict. San Jose Mercury News columnist Sue Hutchison applauded it on behalf of everyone with "Neighbors from Hell," allowing that while there may well be evidence to overturn the murder conviction on appeal, "this one still feels like a victory for the good guys." Ah, there's keen legal analysis. And the credulous, indignant Los Angeles jury members weren't making a gay-rights stand with their verdict, either. As juries so often do, they seemed to follow their feelings -- they just knew that creepy Knoller was guilty! -- rather than the law.

But still, it's hard to say there's nothing to the also-creepy Nedra Ruiz's claim that prosecutors threw the book at Knoller to "curry favor with homosexual and gay folks." The notoriously lenient Hallinan has been attacked by the San Francisco Chronicle over the years for plea-bargaining too many violent crimes, and I think it's incontrovertible that he went Giuliani on Knoller because A) she's despicable, and B) he'd score points in the vote-rich gay community by coming down hard on the nasty killer of a telegenic lesbian.

I support Sharon Smith's attempt to bring a wrongful death suit in Whipple's death. (The law limits that right to family members, not domestic partners, but a local judge ruled Smith could bring such a suit, though that ruling is under appeal.) I hope she gets to sue the pants off Noel and Knoller and their landlords, too. A partner's right to sue is a legitimate gay rights issue: Whipple's tragic death was not.

Liberals often impute special moral status to aggrieved groups, claiming that they're better people because of their suffering, and of course it isn't true. Gay people can be redneck yahoos sometimes just like the rest of us -- but when they do so, they shouldn't get a break. The victim Thursday was Knoller, not Diane Whipple. But there's no advocacy group for loathsome lawyers with killer dogs.