Frat hijinks. Men in women's clothing. Where did they go wrong? 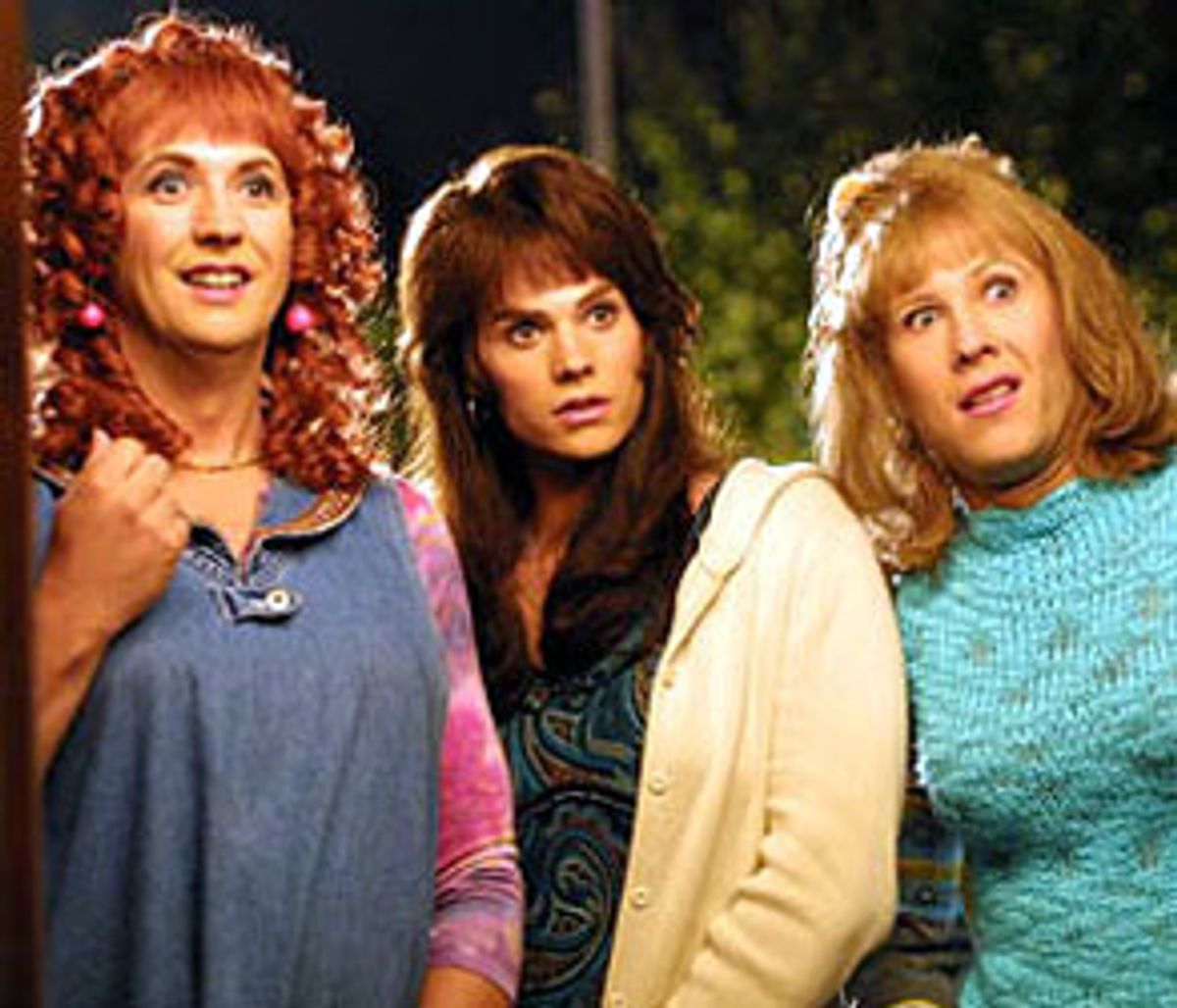 There's almost nothing in "Sorority Boys," an almost quaintly antiquated frat-boy comedy, to get all hot and bothered about -- which is to say, there's nothing interesting about it at all. The movie tries hard to amuse us, or at least offend. In some early scenes, we're treated to some frat-house debauchery and misbehavior, including irresponsible drinking and the boorish pawing of women at parties.

But behind all the shenanigans, there's a message to "Sorority Boys," and it spoils all the fun -- or, at least as much fun as we might have had with the eager but juiceless jokes in Joe Jarvis and Greg Coolidge's script. There's certainly no relief from the earnest yet clumsy performances of the movie's three male leads. Dave (Barry Watson, of TV's "7th Heaven"), Doofer (Harland Williams) and Adam (Michael Rosenbaum, of TV's "Smallville") get kicked out of their fraternity (Kappa Omicron Kappa, or K.O.K.; get it?) for ostensibly stealing the funds that have been set aside for the house's big year-end party. They don't seem to care so much about the stolen money; they simply must get into the party so they can lock down prestigious, well-paying jobs with the high-powered fraternity alumni who'll be in attendance.

To that end, they disguise themselves as women and somehow find their way into one of the campus's less prestigious sorority houses (Delta Omicron Gamma, or D.O.G.; get it?). This is the house that opens its doors to the young women who, in college boys' eyes, aren't exactly the crème de la crème, among them a girl with a voice like a police siren (Heather Matarazzo), as well as a "giantess" (who isn't really all that big but who perceives herself so) and a French girl who would be beautiful if not for the woolly tufts of hair sprouting from her upper lip, chin and armpits.

Naturally, dressing and behaving like women makes the boys more sensitive to the plight of women everywhere. Dave even falls in love with the house's president, the assertive but scattered Leah (Melissa Sagemiller). There's some gross-out goofiness along the way -- one of the best gags involves Doofer's extracting a snakelike gob of hair from the sorority's bathroom drain -- but the movie tries to earn its chief laughs from the sight of three guys with bad wigs and lumpy bustlines teetering about in skirts and uncomfortable shoes.

All comedies in which men cross-dress must be held up to the gold standard, Billy Wilder's 1959 "Some Like It Hot," and in those terms, "Sorority Boys" barely even earns a tin star. Director Wally Wolodarksy (who was one of the original writers of "The Simpsons") pushes the jokes at us clumsily and tentatively; the movie never rolls forward with as much reckless absurdity as it needs to.

An even bigger problem is that the boys look terrible. It's no fun seeing one of them rejoice over finding just the right dress on a store rack when we know it's going to look atrocious on him anyway. Jack Lemmon was genius in "Some Like It Hot" not simply because of the delight he took in frills and furbelows, but because of the way he allowed that joy to transform him into a beautiful creature: He felt beautiful, and so he was.

You don't see Watson, Williams and Rosenbaum coming anywhere close. They don't even look as if they're having fun. Their stint as cross-dressers is simply an endurance test for them, and for us. They learn in the end that women should be treated with respect, and that their current and former fraternity brothers who fail to do so are simply buffoons. But they never even learn to put their lipstick on right. Which means they haven't learned much about being a woman at all.