Bush officials stand up for Afghan women. So why do they say nothing as Egypt jails and tortures gay men? 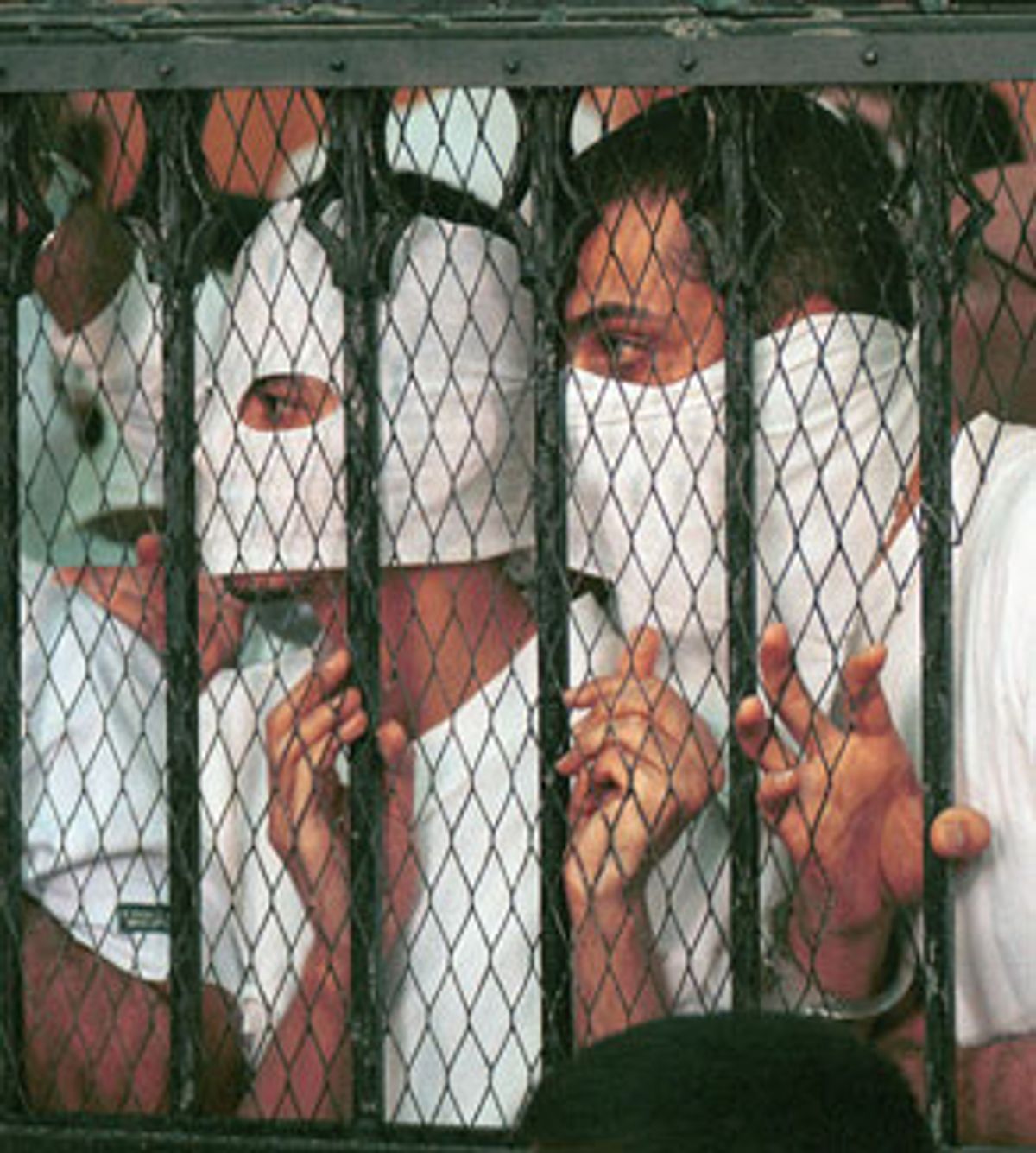 The first rightfully elicited an urgent denunciation via first lady Laura Bush in a special radio address Nov. 17. The second has elicited ongoing silence by the administration since the campaign of arrests and prosecution of gay men solely on the basis of sexual orientation was launched in Egypt last May.

And while the quick trials, hard-labor prison sentences and reported torture of gay Egyptian men have elicited an international outcry, the White House has been jarringly silent. But George Bush's indifference to the civil rights and human rights of gay men has a long, unblemished history going back through his governorship of Texas, where his record on AIDS and civil liberties was a source of rancor to gay activists and the state health-care infrastructure. That apathy has continued up to and including the administration's recent denial of compensation to same-sex partners of victims of Sept. 11.

It has been left to an ad hoc group of Congress members to take the lead as American human rights watchdog -- in its most enlightened, as opposed to grandiose, posture. Last August, 35 members of Congress issued an urgent appeal to Egyptian President Hosni Mubarak to stop the crusade in his country against homosexuals. "People are being arrested because they're gay, they're being charged because they're gay and they're being sent to prison because they're gay," says Dennis Kucinich, D-Ohio, one of the letter's co-signers, and head of the Progressive Democratic Caucus. "This is something that Congress ought to be speaking out on."

There was no response until January, when openly gay Rep. Barney Frank, D-Mass., who had spearheaded the letter, was invited to an Egyptian state dinner -- and refused to attend. In a letter to the Embassy Ambassador Nabil Fahmy, Frank noted that his presence would be "a betrayal of men very much like me who have recently been brutally arrested and imprisoned by your government for no other reason than the way in which they choose to express affection to other human beings in a mutually consenting relationship."

The Egyptian Embassy responded immediately, denying that the actions were on the basis of sexual orientation, and insisting that it had responded to the earlier letter, but the response must have gotten lost amid anthrax-heightened security precautions. "All 52 of the accused are charged under article 9 (c) of law number 10/1961 which prohibits public lewdness irrespective of sexual preference," wrote Fahmy in the reissued letter, dated Nov. 6, 2001.

Finally, two weeks ago, on March 5, the State Department acknowledged the persecution of Egyptian gay men. The 2001 Human Rights Report issued by the Bureau of Democracy, Human Rights and Labor catalogs arrests on the basis of "debauchery," the refusal of the government to try the men in criminal court, confessions reportedly elicited under torture and a prison sentence meted out to a juvenile. The next day, when Mubarak and Bush met at the White House in a highly visible state visit, there was no public discussion of the Egyptian campaign still under way. A week later, five gay Egyptian men received hard-labor sentences in a hearing that lasted 15 minutes, according to witnesses. The men were charged with "habitual practice of debauchery," a provision commonly used in Egypt to penalize consensual homosexual behavior. The same law was used to sentence 23 men to one to five years of hard labor on Nov. 14 of last year, in the notorious Queen Boat case.

But spurred by the new State Department report, and the Egyptian ambassador's belated response, a consortium of 37 Congress members delivered another letter this week to Mubarak, rejecting their explanation and continuing to put pressure on Egypt. "We are encouraged that Ambassador Fahmy in his letter officially denies that the 52 men in Cairo were prosecuted because of their perceived sexual orientation. We say we are encouraged because this denial recognizes that such actions are essentially indefensible," notes the letter.

The embassy has privately shared that international attention is causing it grief, however much a domestic hard-line against homosexuals benefits Mubarak's standing with the conservative constituency. Bush walks a similar tightrope.

But on the larger world stage, it is in the best interests of the White House, which has regularly been a target of criticism for ignoring the human rights violations of strategic allies, to publicly encourage the equality of all Egyptian citizens, regardless of sexual persuasion. That Egypt is the second largest recipient of U.S. foreign assistance gives the White House additional leverage to request compliance with its human rights standards.

"Egypt is an important ally of the United States, and yet the United States remains silent on this issue," says Sydney Levy, spokesman for the International Gay and Lesbian Human Rights Campaign, based in San Francisco. "President Bush must remember that against torture there should be no immunity, and there can be no neutrality." When Laura Bush spoke out against the persecution of Afghan women last November, she noted that "all of us have an obligation to speak out." The president also positioned himself squarely as the guardian of international human rights last December when he proclaimed both a Human Rights Day and Week, analogizing "human rights around the world" as an extension of the American Bill of Rights, and enlisting "all Americans to celebrate the universal principles of liberty and justice."

This applies to gay men everywhere, including Egypt, as much as women in Afghanistan, or anywhere.

Cliff Rothman writes about politics and culture for Vanity Fair, the New York Times and the Los Angeles Times.