When bison wander from Yellowstone National Park, they fall prey to Montana gunmen -- unless they're rescued by a motley band of eco-warriors. 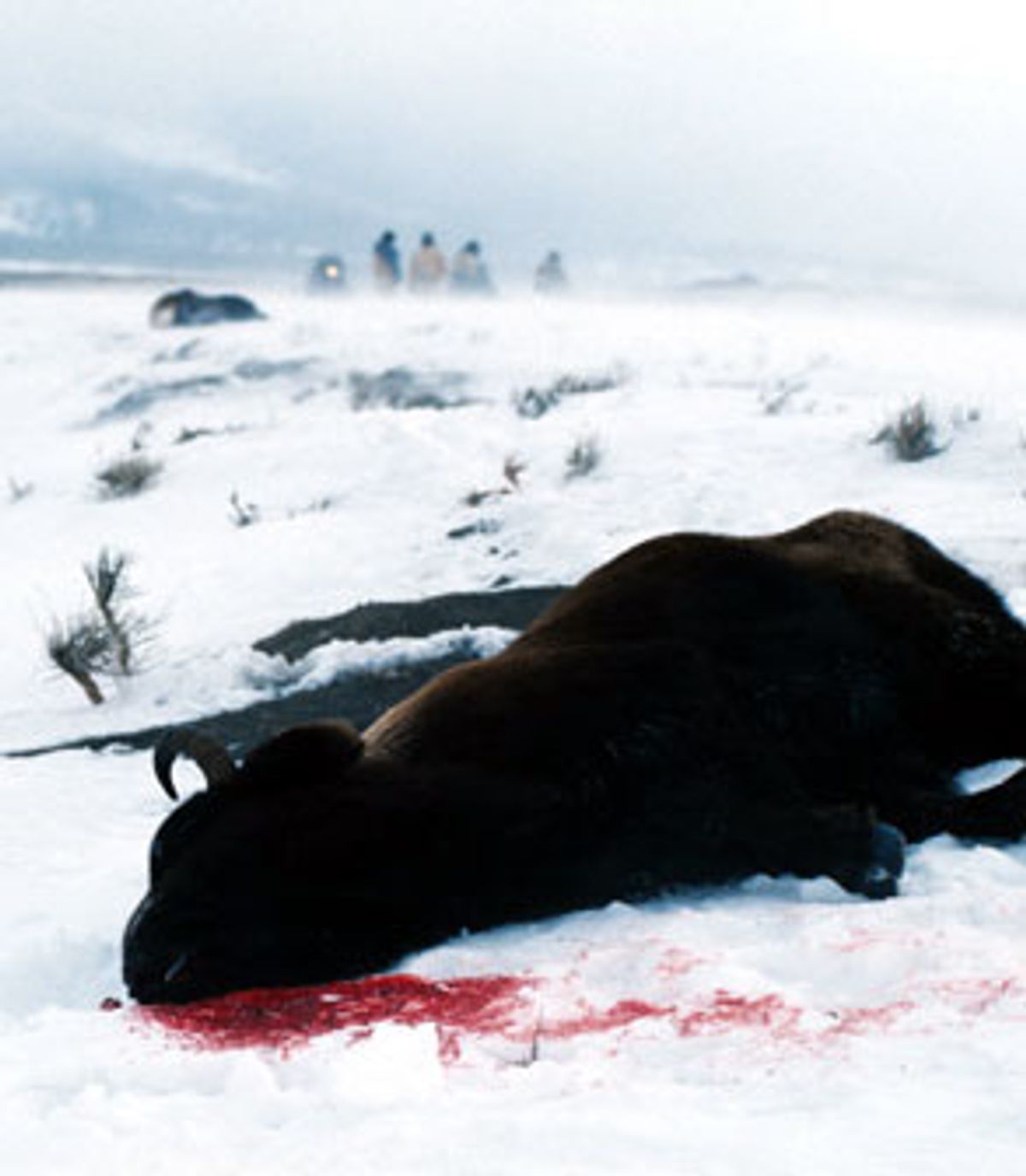 They had driven two days and nights from Bloomington, Ind. They had studs in their tongues and rings in their noses, and after they trudged out into the woods to get a feel for the territory, they carved the letter A -- for anarchist -- in a circle, in a snowbank. They had come to Montana on a singular quest: to let the buffalo roam.

Now they stood, Emily and Tim and Piper and Lindsey, like hobbits at the gates of Mordor, on a snowy Forest Service access road across frozen Duck Creek from the bison trap on old man Koelzer's farm. Shivering in the 20-below-zero cold, clad in Salvation Army pea coats and plaid pants and Doc Martens, the youthful quartet were briefed on how to fight the power, which, in this case, meant getting ready to sit. To sit, to watch, and to videotape.

Over the past five years, more than 1,000 volunteers have come to an unheated backcountry cabin north of West Yellowstone to participate in a remarkable campaign of environmental activism. They have come to the coldest spot in the lower 48 states from places as far-flung as New Zealand and Israel and Germany to witness, and at times obstruct, the Montana Department of Livestock in its roundup and slaughter of buffalo that wander out of Yellowstone National Park.

There are reasons for the roundup. About 40 percent of the bison in Yellowstone carry antibodies to brucellosis, a bacterial disease that weakens cattle and sometimes causes them to have spontaneous abortions. In the 68th year of a brucellosis eradication campaign, the U.S. Department of Agriculture is on the verge of eliminating the disease from cows and other domesticated animals. But the bacteria live on in the wild, particularly in Yellowstone. European beef cattle originally spread the disease to elk and bison. Now, these animals threaten to return the microbial favor.

During the summer, about 2,000 head of cattle graze on the private and Forest Service lands around Yellowstone where buffalo like to wander. Morbidly afraid that their cows will be contaminated by the bison, the state Department of Livestock is spending $1.4 million this year to haze wandering buffalo back into the park, using trucks, snowmobiles, helicopters and firecrackers. When hazing fails, the livestock agents capture the buffalo and test them for brucellosis -- those with positive serology are slaughtered, their meat donated to Indians in Bozeman.

Protests against the roundup began in earnest following the bitterly cold winter of 1996-97. Montana slaughtered 1,083 bison that had migrated from the Yellowstone plateau onto less snowy lands outside the park. Another 800 -- out of a total herd of perhaps 3,500 -- died of starvation.

Mike Mease, a self-described "undercover journalist" who had produced CopWatch-like documentaries for Indian tribes and environmental activists, was so incensed by the slaughter that he and Rosalie Little Thunder, a Dakota activist, set up the Buffalo Field Campaign to try to stop it. The following year, Mease and his volunteers started filming every step of the operation.

"I learned a quick lesson: I could be out there with a video camera and they would not kill the herd," says Mease, 40, who is your basic blue-eyed, shaggy-haired, Christ-lookalike Army brat. "They didn't want it documented. Because this had been a pretty swept-under-the-rug operation."

Mease argues that the eradication campaign is pointless. Brucellosis is essentially a form of ungulate venereal disease, spread through the reproductive tract or aborted fetuses. There haven't been any confirmed cases of bison-to-cattle transmission, he says. And the antibody tests performed on the bison, he argues, result in false positives and unnecessary killing.

But scientists dispute Mease's analysis of the brucellosis threat, even if they don't necessarily support the slaughter.

"Our work has shown that the bison are truly infected and we've shown that the organism is the same one that can infect cattle," says Thomas J. Roffe, the wildlife veterinarian in charge of the U.S. Geological Survey's brucellosis research program, based in Bozeman. "Of course, until you see a cow walk up to a bison abortion, lick it and then abort herself, you're never going to have proof that it occurs."

The buffalo campaign, offbeat as it is, has the support of many people living in the area west of the park. Increasingly, these are not cattle ranchers but transplanted suburbanites in expensive new housing developments. Mease's minions offer a free removal service for bison that trample gardens or wreck fences. With the property issue taken care of, many of the transplants actually enjoy having these charismatic megafauna in their midst.

There is no danger that the anti-brucellosis campaign will drive bison to extinction; the Yellowstone herd has already grown back near its 1996 level. Buffalo conservation is in fashion, actually, throughout the West, where the population of bison (the American variety of the buffalo) has increased at a 14 percent annual rate in the past decade.

Still, there is something symbolically appalling about killing buffalo. Perhaps it is the manner in which the animals dumbly accept a bullet to the brain. Or, more likely, the dithering thump of a 2,000-pound beast hitting the ground faintly echoes the 19th century slaughter of 60 million of the beasts, an essential element of the drive to deracinate the Indians and repopulate the Plains with cattle-raising Protestants. Bison bison, hump-shouldered survivor of those campaigns, is the iconic trapezium of the American West. His brown eyes are beady, suspicious and unvanquished. The horns and dark wooly mane are so familiar they could almost be costumes.

"They represent wildness," says Summer Nelson, a veteran activist in the Buffalo Field Campaign. "They are connected with so much -- with the history of public lands, the native wildlife and people and our lack of respect for the land."

The campaigners wax misty about the animals, often describing them in human terms. Mease tells a story about a male buffalo, nicknamed Houdini because of his ability to escape capture, who one day led 13 other bulls around the livestock agents. "Later that day," says Mease, "11 of the bulls walked to within 20 feet of us, stopped and nodded and thanked us for letting them know that the DOL was in town."

The bison understand that Mease is helping them?

"Oh, without a doubt. Every single day they're out of the park we're with them," he says. "We've been known to shepherd them to safe areas."

When federal and state officials try to influence the animals' movement -- sometimes by flying helicopters low and slow behind them -- it is called hazing. When Mease and his merry band do it, they call it shepherding.

In a larger sense, both activities -- the culling of infected animals, and the protection of the animals by radical environmentalists -- are forms of wildlife management, the somewhat oxymoronic activity that is as old as Yellowstone -- which became the first national park in 1872.

As the largest national park in the continental U.S., Yellowstone can be a very wild place. It has thousands of virtually unvisited acres, and an intact ecosystem with large mammals at the top of the food chain. But, historically at least, much of this food chain has been managed by humans in one way or another.

Elk, grizzly bears and wolves, once hunted nearly to extinction, were reintroduced to the park by rangers and now thrive there. The "wild" bison are descendants of the 23 wild stragglers and 21 imports that were herded together in the park's Lamar Valley starting in 1907 -- in response to one of President Theodore Roosevelt's pangs of guilt about the dismemberment of the West.

History would seem to undermine absolutist philosophies of nature in Yellowstone. Yet something about the place invites absolutes, even demands them -- the grandeur of the mountains, the vast meadows and waterfalls and incredible, almost surrealistic geysers, the psychedelic blue hot pots. To quote Edward Abbey, patron saint of the Green paganism, "An increasingly pagan and hedonistic people (thank God!), we are learning finally that the forests and mountains and desert canyons are holier than our churches."

One week this winter, 35 people were living in the cabin or in one of four teepees set up around it on a pine-forested hillside above Hebgen Lake. Three stunning mountain ranges surround the lake, with Yellowstone on a plateau to the west. There is plenty of room for sleeping bags in the loft above the main room of the cabin and Seeds for Peace, a nonprofit catering group, does all the (vegetarian) cooking. At night there's a big communal meeting for people to bitch and posture and plan the next day's activities.

For an environmentalist looking for action, this is something of a dream gig. Yellowstone, with its furry and sacred icons, is the perfect animistic shrine -- definitely a better work environment than a Superfund site in New Jersey.

Each day, at least a couple of two-member patrols cover each of three checkpoints to watch for bison on the move, or Montana Department of Livestock agents on the move against the bison. They travel by car and cross-country skis. Every patrol carries an FM radio for communication and a video camera to record whatever happens.

A lot of times, nothing much happens at all. Other times, the buffalo resist the loving embrace of the field campaign. "In 1999 we had round-the-clock patrols to keep the buffalo from leaving the park," recalled Dan Brister, 32, who spends his winters in the cabin and lives the rest of the year in Missoula, where he's a graduate student in environmental studies at the University of Montana. "It was very hard to do because the animals were hungry and you felt like you were starving them to death. But if they left they'd just head into the trap for the hay, and get slaughtered. Sometimes we'd give them a little shove."

The "little shove" meant walking to within 50 yards of the bison and clapping, usually enough to cause a retreat. Sometimes, though, the animals wouldn't budge. "When the buffalo's tail goes up in the air it means they are going to charge or discharge. So if they don't poop it shows they are pretty agitated and it's probably a good idea to get out of their way," says Brister.

Other dangers lurk as well. In 1999, Brister, Mease and two other activists were arrested when they tried to keep livestock agents from capturing two buffalo. The buffalo, trapped on a road between the activists and the agents, bolted up 12-foot-high snow berms on either side.

Brister was charged with negligent endangerment for "trying to cause death or serious injury to a state official by hazing a buffalo at him." The group's video footage absolved him of the charge, which was dropped.

Mease believes that the Yellowstone bison have "pure genetic links" to the Indian days. But this eugenic romanticism is based, like most of Yellowstone lore and the rest of our beliefs about nature, on a human construct.

"What is unique about YNP bison? You tell me," says Roffe. "If you go to the National Bison Range [a federal preserve in Moiese, Mont.], you can't tell the difference between those animals and the Yellowstone bison. But every year they round them up, give them blood tests and cull them. They are handled differently from the Yellowstone herd. Does that make them less valuable? There's nothing about wildlife management that isn't colored by our own perspectives."

The perspective of the Buffalo Field Campaign is colored by environmental concerns, but also by youthful enthusiasm and romance. Unlike the more ephemeral or relentlessly frustrating battles in the defense of nature, this one is a ground war with discernible, if debatable, results.

"It's a lot better now than it was when they were shooting every buffalo that came out of the park," says Brister. Better for Brister, definitely. Better for the buffalo? As a symbol, certainly. For the animals themselves? We may never know.