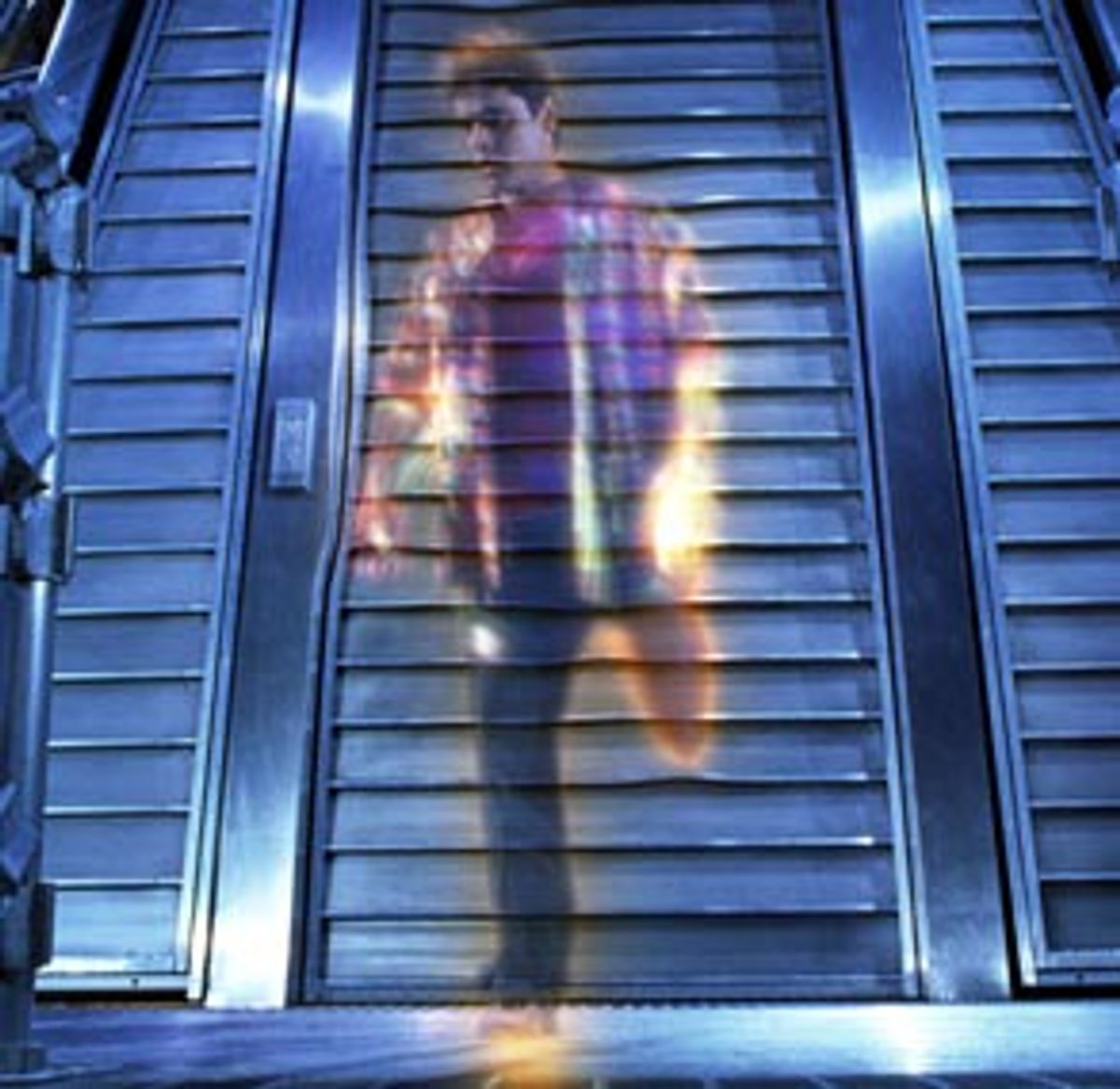 "Clockstoppers" contains an impressive science-fiction idea, able special effects and a teenage protagonist who -- thanks to actor Jesse Bradford -- is real, likable and entertaining. But beware: That's not all that this PG story contains. There are also several uninspired two-dimensional villains, a lame love story and far too many gratuitous attempts to please the average 13-year-old male, either with the female navel or cool freestyle bicycle tricks.

Which of these two divergent forces wins out? Since we're talking about Hollywood fantasy -- and predictable family fare at that -- I'm tempted to argue on behalf of the forces of good, but it's actually hard to say. "Clockstoppers" is the kind of movie that rekindles interest in imaginative books like "Einstein's Dreams," while also making you want to muzzle Sen. Joe Lieberman forever. If this is the kind of trite and predictable schlock that passes for nonviolent family entertainment -- see, Senator, Hollywood's not immoral at all! -- kids with brains might as well just give up and sneak into "Mulholland Drive."

But let's start with the good: hypertime. This is, according to the film's marketing materials, "a state of being that gives the average human the extraordinary ability to freeze time and wander the world undetected, wielding virtually unthinkable power." It's actually much more scientific than it sounds. The idea has to do with speed. As explained by Zak's scientist father (Robin Thomas), someone in hypertime has had his molecules accelerated to a point at which he's moving so fast that he's essentially invisible. A special watch sets the shift in motion: Press a button and enter extreme turbo.

Zak (Bradford), of course, discovers the watch accidentally, in a box of his father's stuff, and mistakes it for the average Timex. He first uses the watch to impress Francesca (Paula Garcés), a new girl at school who has just arrived from Venezuela and who seems unable to wear anything but half-shirts. Then, as a pair, they enter hypertime and take off for town, where they exact revenge on a pair of dorky, unintimidating bullies, a meter maid, and a used car salesman who angers Zak by trying to sell the car he wants to buy.

The pranks they pull are relatively creative and go off smoothly. Linking the bully's nose ring to a bicycle spoke, for instance, makes for a good laugh. Bradford (first seen in Steven Soderbergh's "King of the Hill") provides Zak with the perfect mix of awe and "hey, whatever" charm. And the effects are also simple but impressive. Instead of showing Zak and Francesca moving quickly, director Jonathan Frakes (Commander Riker on TV's "Star Trek: The Next Generation" and later the director of two "Trek" films) mainly chooses to make the rest of the world slow down. A sprinkler trickles at a fraction of its regular speed; people walk at the pace of dripping molasses.

Frakes also pulls out a few other tricks, including a version of the bent-backwards "Matrix" effect. I long tired of this contortionist device when I started seeing it parodied on the dance floor, but it actually works here because Frakes doesn't overdo it. When villains who want the watch appear and blast Zak with liquid nitrogen, he freezes out of hypertime, turns a shade of blue and tips backward -- but not enough to make the scene ridiculous.

The same can't be said for the movie's villains, though. Rogue government agents who want the watch for reasons that "Clockstoppers" never explains, they're only slightly more lifelike than a Furby. The main villain, who doesn't seem to have a name, wears standard villain-issue dark suits and furrows his brow whenever possible. He speaks only in clichés and, when he kidnaps Zak's dad, it becomes obvious that he's nothing more than a plot device to keep the action going. If the high-school bullies look silly with their spiked hair, this guy is downright useless. He might as well be inflatable.

The principal subplot, a budding romance between Zak and Francesca, is also hard to swallow. Garcés does a nice job as Francesca but doesn't get much help from Frakes' direction. Even if she is the daughter of a Venezuelan diplomat, would she really change from jeans into a skirt and crop-shirt to rake leaves? Does she have to appear in only a towel for 15 seconds -- as she does in a hotel room scene -- when she's already shown more skin than Britney Spears? Every time Francesca and Zak move into kissing range, heavy-handed musical hints at intimacy suddenly flow from the speakers. At one point, it's a cover version of Cyndi Lauper's "Time After Time"; in other scenes it's high-impact classical.

None of this is necessary. The music and the outfits are attempts to make the audience care about Zak and Francesca's youthful romance. But the attention to appearances and music only underscore the fact that Zak and Francesca are innocent buddies, not teen lovers.

Comic relief is amiably provided by Dopler (French Stewart) -- a geeky former student of Zak's dad who designed the hypertime watch. And Robin Thomas handles the paternal stereotype (he works too hard, but eventually stops taking his kids for granted) with aplomb. He's forced to say things like, "Wow, Zak, your plan really worked," but this is par for the course. What "Clockstoppers" achieves in acting and decent special effects, it undermines with weak dialogue and directing. The movie isn't bad; it just makes you wish that certain scenes could be hypertimed into oblivion.