A bill before Congress would mandate built-in copy-protection on all digital devices. But even technology experts who really want to protect intellectual property think it's a lousy idea. 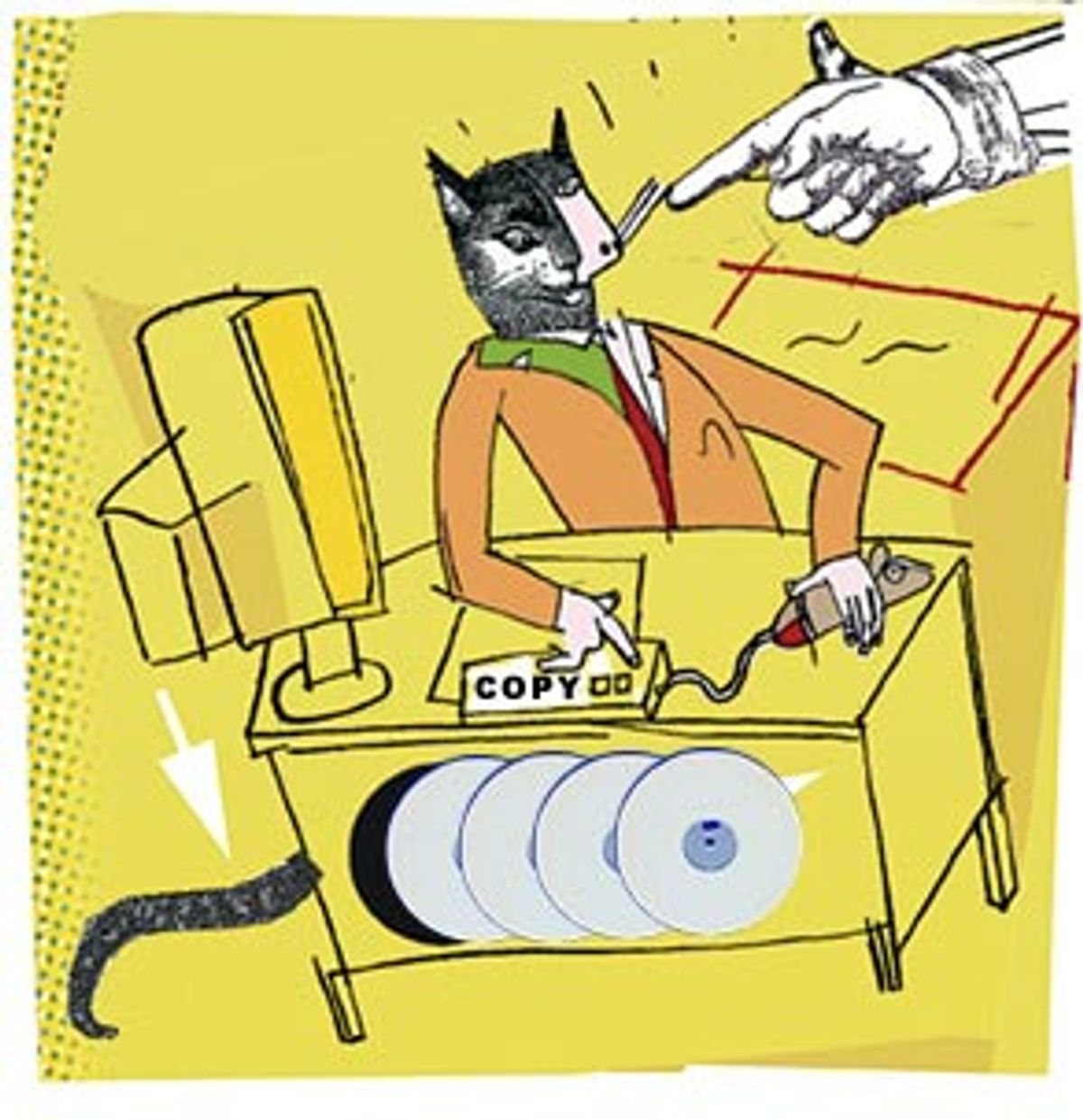 If you think techies hate Microsoft, try asking them about Hollings -- Sen. Ernest F. "Fritz" Hollings, that is, the South Carolina Democrat who finally introduced his long-dreaded copy protection bill into Congress last week. If there's an axis of evil for technology, Hollings has made the list.

Hollings' bill, formerly referred to as the SSSCA (Security Systems Standards and Certification Act) but now dubbed the Consumer Broadband and Digital Television Promotion Act (CBDTPA), would require any device that can "retrieve or access copyrighted works in digital form" to include a federally mandated copy protection system.

That covers not just your next iPod or Windows Media Player, but just about every digital device with a screen, a printer, an audio jack, a disk drive, a memory stick, or several input/output devices yet to be invented. Your computer, your camera, your car stereo.

CBDTPA's goal is to force a powerful sector of U.S. industry -- makers and sellers of digital hardware and software -- to submit to the needs of the smaller but more established entertainment lobby. This legislative approach to copy protection has already riled consumers of digital entertainment who fear that hardware copy protection will make their lives more difficult. But it's also raising concern among standards experts who already support what is known as "digital rights management" -- strategies for protecting copyrighted intellectual property.

Such experts say that by trying to enforce technology standards on a timetable driven by Hollywood's fears, CBDTPA will more likely undermine existing work toward effective digital rights management. Some say the hypothetical standard sought by Hollings' bill will only work for major studios. Many are sure it won't work at all.

Everything you need to know about whom CBDTPA is meant to benefit is summed up near the top of the bill.

Hollings sees the lax demand for these products and services as a dire problem in need of government intervention. "Roughly 85 percent of Americans are offered broadband in the marketplace, but only 10 to 12 percent have signed up," he said when introducing the bill last week. "Most Americans are averse to paying $50 a month for faster access to e-mail, or $2,000 for a fancy HDTV set that plays analog movies."

Such consumer behavior might sound to most observers like common sense in a recession, but Hollings offered a different diagnosis: "If more high-quality content were available, consumer interest would likely increase," he said.

Why isn't this content available? Digital piracy, the bill says, has prevented makers of "high quality digital content" (sources say Disney and News Corp. are leading backers of the bill) from producing the high-resolution, downloadable movies that would supposedly send Americans running to buy new HDTVs and order fat Net connections to their homes.

CBDTPA lays the blame for piracy squarely at the feet of tech companies:

(7) Competing business interests have frustrated agreement on the deployment of existing technology in digital media devices to protect digital content on the Internet or on digital broadcast television.

Translation: The makers of digital hardware and software are focusing on their own bottom lines, rather than Hollywood's. Microsoft alone is expected to rake in $29 billion in revenue this year, nearly double that of the entire music biz, and comparable (depending on who's counting) to the entire U.S. movie industry.

But bundle the whole range of publishing, new media, broadcasting, film, television, cable and satellite communications involved in making and shipping digital content, and the result is a $300 billion sector, according to Andersen Consulting. The larger goal behind CBDTPA isn't just to keep "Attack of the Clones" from being Napstered; it's to kick-start consumer demand throughout the entire broadband chain.

In that light, Hollings' goal may be laudable. But the people who actually create technology standards say his approach is doomed to failure.

Pity the standards wonks: Exceptionally intelligent, extraordinarily focused, and (usually) diplomatic to boot, the people who form the committees that define and maintain the formal rules that let our hardware and software inventions work together have little power outside their own highly politicized worlds. They may define protocols and behaviors worldwide, but they can't force managers to buy into them, or cajole engineers to implement them properly.

And they're rarely allowed to speak publicly for their employers, except to utter canned scripts like "Standards are good" or "My employer is a leader committed to standards in our field."

Take them to dinner, and they'll follow hilarious one-liners about their colleagues by recanting, with a firm "Don't quote me on that!" But getting them to talk about Hollings' bill requires only a sincere promise not to rat them out by name or organization. Then the truth comes out: "Hollywood people know just enough about technology to be dangerous," one groans, rolling her eyes.

"How many times do we have to tell them? You can't rely on a hard-coded solution," says another, waving his chopsticks dangerously close to my nose for emphasis.

Playing devil's advocate, a thick-skinned journalist can say Hollings' heart is in the right place, and a nationwide copy-protection standard could help turn the economy around. Assuming a copy-protection mandate is inevitable, what do standards experts think is specifically wrong with CBDTBA? None of them agree on the details. But three common themes emerge:

1) It puts the Federal Communications Commission in charge of a complex hardware/software standard. On this, criticism has been out in the open. "It's no secret that the federal government has difficulties creating standards for cutting-edge technology," said Jonathan Zuck, president of the Association for Competitive Technology, in a public statement. "The bill would be more accurately titled the 'Content Owners Market Promotion Act.'"

2) It may focus on watermarking. Digital rights management (DRM) experts say Hollywood still has hopes for watermarking systems that don't require the user to identify herself with a security key or password. But watermarking schemes are doomed to failure. In watermarking, the decision is made by software inside the player. A watermark detector inside the player looks at the content and tries to find the watermark, then decides whether or not to play the content. As demonstrated by security researchers like Princeton's Ed Felten, it's easy to remove or add a watermark to content, fooling the player. More simply, frustrated consumers could create a market for bootleg players that don't check for watermarks at all, like the current rush on DVD players that ignore geographic restriction codes burned onto the discs. The decision to play or not to play must be made by the content, not the player, DRM experts warn. It's tricky, but they'll get to it -- if the industry isn't forced to accept a compromise standard first.

3) The standard will be a compromise geared toward serving mass-market movies and music. The bill insists the mandatory technologies be "reliable, renewable, resistant to attack, readily implemented, modular, applicable in multiple technology platforms, extensible, upgradable, not cost prohibitive," and that "any software portion of such standards is based on open source code." Sounds like a bill drafted by the free-software geeks at Slashdot -- but will the result let me protect and promote essays on my weblog just as Sony does its movies, music and games? If not, it would undermine years of work toward global DRM solutions for copyright holders of all kinds, from street poets to operating-system makers.

The music and movie people -- and to a lesser extent, e-book publishers -- seem convinced that technology companies are just avoiding building an unbreakable content lockbox for them. But to the security experts and the standards-committee members who've dedicated their careers to finding solutions, drafting a law ordering the problem to be solved isn't the "wake-up call" Hollywood is calling it. It's just the latest Beltway foolishness. Next, they'll float a bill extending Moore's Law -- to benefit consumers, of course.

Paul Boutin is a technologist and writer in San Francisco.