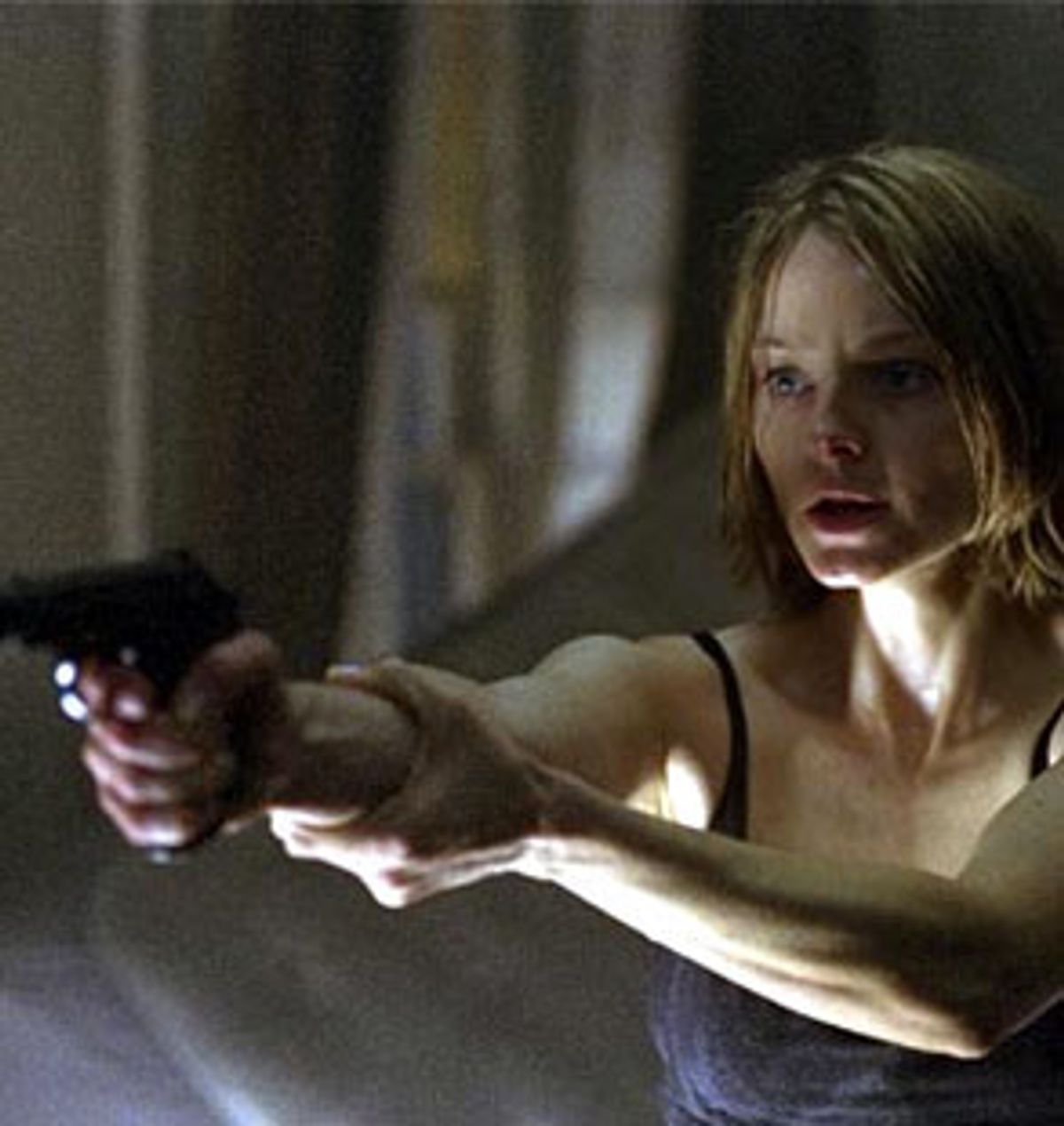 Alfred Hitchcock used to say that whenever he saw one of those standard old-movie shots peering into a living room from the back of a blazing hearth, he'd ask himself, "Who's in the fireplace?"

Hitchcock would have a lot of wondering to do at the tricky vantage points in David Fincher's thriller "Panic Room." Fincher sends his camera into keyholes, through electrical outlets and snaking around air ducts, between the solid barriers that separate one floor of a house from another. These gimmicky effects add nothing in the way of suspense. They're like a kid shouting, "Looky what I can do, Ma!" But the glummest kid imaginable.

For somebody so dedicated to playing around with the camera, Fincher doesn't seem to be having any fun. He doesn't get jazzed up, the way Scorsese does when he's showing off, as in those ridiculous close-ups of balls zooming around a pool table in "The Color of Money." "Panic Room" is a little like watching a demonstration of trick shots by a manic-depressive hustler. Fincher takes no apparent joy in making movies, and he gives none to the audience. The title sequence features the names of the actors and crew appearing as legends on a series of Manhattan skyscrapers, similar to the way the titles appear in the beginning of "North by Northwest." But the low drone of Howard Shore's score warns you Fincher isn't up to anything as frivolous as giving the audience a good time.

Recently, I heard a critic call Fincher's "Seven" the most influential movie of the last few years. I don't think there's any disputing that. Just look at the poster for last year's slasher flick "Jeepers Creepers," or the trailers for Barbet Schroeder's upcoming "Murder by Numbers," and you see the combination of shaky titles, detritus and grime that wouldn't be out of place in a Brothers Quay animation -- gloom illuminated by sudden shock flashes of light that characterized the opening titles of "Seven." And the self-seriousness of that movie, not to mention the go-for-broke grisliness, seems to have permeated Hollywood thrillers, which are now sold less as if they were an enticing, exciting few hours than as if they were an endurance test, punishment waiting to be dished out.

Fincher is drawn to pulp, but part of the critical appeal of his movies is that he treats pulp with a solemnity usually reserved for the art house. That's what makes it possible to hear "Seven" discussed as if it were a serious treatise on (ahem) "The Darkness Within Us All." His sensibility -- which might be called nihilism as graphic design -- seems calculated to get people to swallow what they might otherwise be embarrassed by. Beneath all the batterings and boozing and gutter rot in "Fight Club" lies a message that would be perfectly suited to "Oprah," about the pain of men trying to come to terms with their masculinity and crying out for lost father figures. (Anyone still infatuated with "Fight Club" might try watching it after Sept. 11 and see if they can stomach the finale, where a city falls in a terrorist attack. Of course, Fincher doesn't show us any people being killed. His unpopulated skyscrapers, like the unpopulated suburban homes at the climax of Antonioni's "Zabriskie Point," are the symbols of an empty, prefab culture.)

David Koepp's screenplay for "Panic Room" takes off from a good, serviceable thriller premise. Jodie Foster is a recent divorcee whose ex's moolah allows her to buy a big Upper West Side brownstone. The place is three floors with a working elevator and, off the master bedroom, a panic room -- a steel-lined security vault with a separate phone line, video surveillance monitors and supplies designed to let the occupants survive home invasions or other potential disasters. During her first night in the new place with her teenage daughter (Kristen Stewart), three men who expected to find the house unoccupied enter. Foster and her daughter hole up in the panic room, only to discover that what the men came for is in there with them.

That isn't a bad beginning for a siege movie. But Fincher's grinding sensibility provides no sense of contrast. Would it have been too difficult for him to shoot the brownstone as a dream home, in order to give us the jolt of seeing a safe harbor turned into a trap? When Foster and her daughter tour the place with a pair of real estate agents (one of them played by Ann Magnuson, whose snappy, bitchy repartee provides a little relief), no shaft of sunlight strays into Fincher's meticulously designed dinge. And the cinematographers (Conrad W. Hall and Darius Khondji) frame the women against vast gray spaces so they look lost in the rooms. The place looks like a death trap, and anyone in the audience who's actually seen a movie before is probably shaking their heads in disbelief asking, "They're not going to move in there?" It's like those moments in slasher movies when a character wanders into a dark room or outdoors at night while we wait for them to be turned into tartare. Except that it doesn't have any awareness of its own cheesy obviousness, the thing that can get a horror movie audience laughing at the silliness of the whole setup.

Humor is not Fincher's strong suit. And "Panic Room" desperately needs some jokes (grim sardonicism doesn't count). Not just because of the claustrophobic setup, but to make the contrivances in Koepp's script seem like part of the fun. (Foster hasn't had the panic room phone hooked up. And that's not all: She's claustrophobic and her daughter is diabetic.) Some of the contrivances aren't even in the script, just a result of Fincher's lousy direction. When the robbers are creeping their way upstairs, they're careful about every noise and creak. That hasn't stopped them from arguing at nearly full volume in the previous scene while Foster and Stewart sleep a few floors above. And though we all know that old houses make noises, a man the size of Forest Whitaker walking around in the dead of night doesn't raise a peep.

The odd thing about Fincher's attempts to sell pulp as if it were dark, edgy drama is that he misses the dramatic meat that good pulp can have. Two of the home invaders have their reasons for breaking into the place. For Forest Whitaker, the security expert who designed the panic room, it's money to hold onto his kids during an upcoming custody hearing. For Jared Leto -- overacting, and not as amusingly as he thinks, and proving that you should never trust a white guy in corn rows -- it's to settle an old family score. Unfortunately, Leto brings in an extra man, Dwight Yoakam as a brutal hood who's just there for the money, and not too particular about what he has to do to get it. Yoakam spends much of the movie in a ski mask, and it's a good thing. His acting has a pasty dourness that's light years away from the slim, slow-poke sexiness you hear on his CDs or see in his live performances.

It's not hard to see how Koepp might have intended that setup to divide our loyalties, to make us understand the point of view of the fox as well as the hound. Walter Hill pulled that off in his underrated siege movie "Trespass." And it's not hard to see how a proficient action director of the old school, like Samuel Fuller, Budd Boetticher, Phil Karlson or John Sturges, might have made that division work. In the right hands, "Panic Room" might have been one of those movies, like Stanley Kubrick's "The Killing" or John Huston's "The Asphalt Jungle," that made us share the desperation of bad men. Fincher's grinding -- and finally, static -- relentlessness reduces the villains to stick figures. There's no horror in seeing their plans go out of control (obviousness isn't the same thing as inevitability) because they exist solely to fulfill their generic function.

Forest Whitaker somehow manages to wriggle out of Fincher's sullen game plan. It must be through sheer force of will, except that you never catch Whitaker forcing anything. Actors of a certain physical bulk usually don't have to do much to exude menace. Whitaker, though, has always conveyed a gentle, sorrowful air more than anything else. It's present in everything about him. Those hangdog eyes, the downturn of his mouth, his sloping, oddly light-footed walk, as if he were carefully picking his steps, even the soft, throwaway quality of his line readings -- he sounds as if he might be whispering to a buddy around a campfire. The poignancy of Forest Whitaker is in watching a big man who's light on his feet but weighed down nonetheless. Regret for what he's done and what he might do has settled on him like a second skin. There's a jump moment in "Panic Room" where Whitaker and Foster come face to face that suggests what the movie might have been. It's like a variation of the mirror sequence in "Duck Soup." The two look nothing alike; what matches up is the fear and surprise in their eyes.

You'd think that a movie about a brave mom and her brave daughter keeping their heads and staying alive in the midst of men who mean to do them harm would allow you to take some pleasure in the women's triumphs, in their moments of cunning and ingenuity. But that notion belongs to thrillers that are made for audiences to enjoy themselves. And here Foster and Stewart are just two more rats running through Fincher's maze, not allowed to take any pride in their smart moments or even a hint of enjoying their vengeance. Foster gets to show some wit once, when she has to get rid of two cops who come to the door. You can feel her flickering to life as an actress in the scene, breathing and stretching a little bit. (After the feel for the texture of family life that Koepp brought to the last film he directed, the genuinely spooky paranormal thriller "Stir of Echoes," I wish he'd directed "Panic Room" himself.) "Panic Room" might be entertaining for those who like seeing a terrified teenage girl watch a loved one get beaten to a pulp while she slides into a diabetic coma. For the rest of us it's both stagnant and vaguely unpleasant. There has to be some use for David Fincher, though. Maybe the electric company could showcase his gloomy, underlit interiors in TV ads. One look at them and I can't imagine anyone who wouldn't want to set every light in the house ablaze.