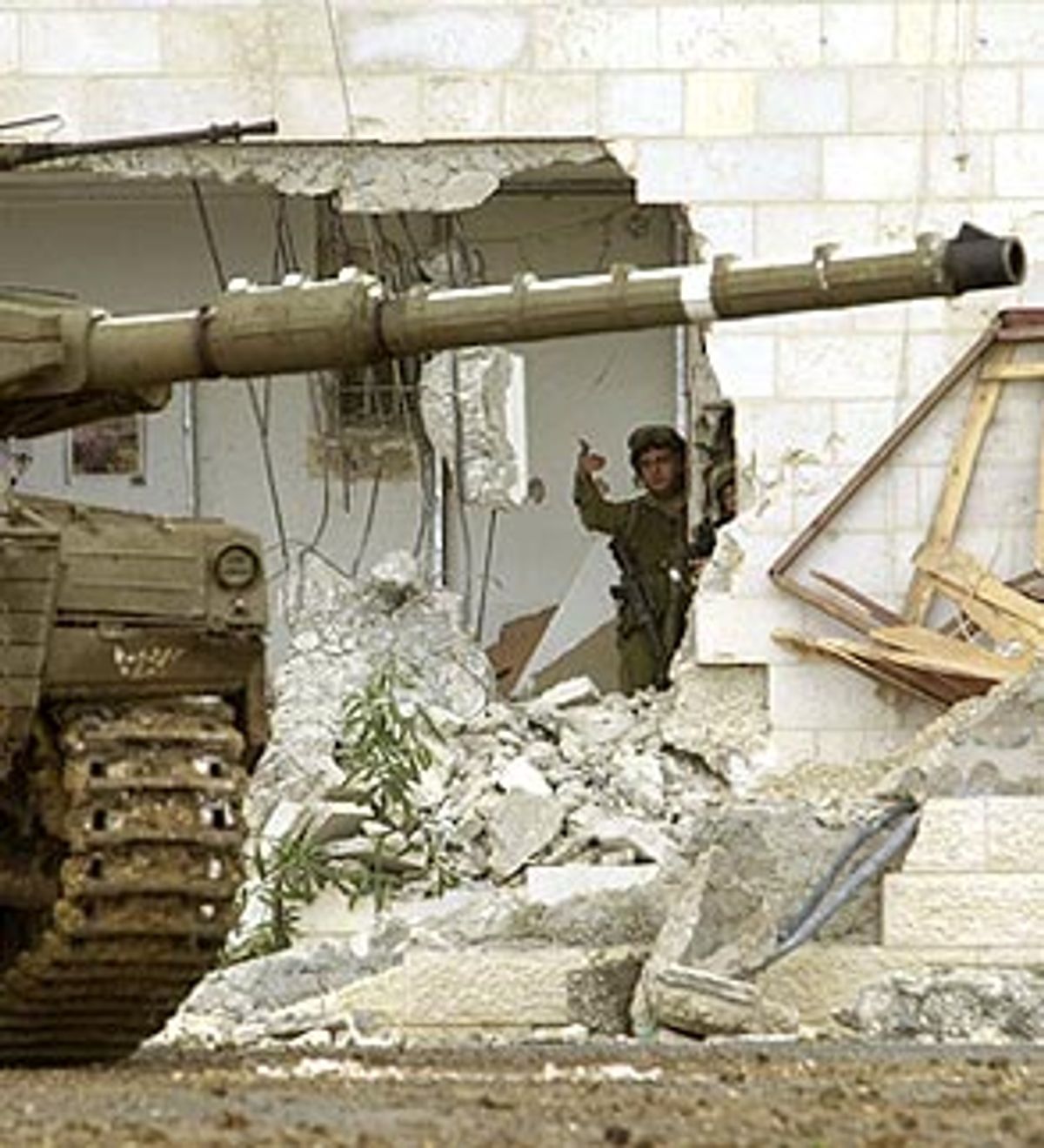 "I can't talk now, I'm under fire," shouts Bassam Abu Sharif over the phone on Friday afternoon, trying to raise his voice above the din of machine-gun fire and the dull thuds of exploding grenades. The advisor to Yasser Arafat lives right outside the Palestinian leader's headquarters in the West Bank town of Ramallah. "My house was the first to be surrounded by tanks," says a shaken Abu Sharif. "The soldiers came in and they were very rude to me and my wife. I don't want to go into details but it was not pleasant."

As he speaks the sounds of the fighting reach a new crescendo. "They are attacking Arafat," screams Abu Sharif. Some 60 Palestinians have reportedly been detained by the Israeli Defense Forces since the operation began. Abu Sharif implored the U.S. to "act immediately to stop the Israelis. The situation is very dangerous," he added.

The situation is also dangerous in Jerusalem, which was shaken Friday by yet another explosion by a Palestinian suicide bomber. Ayat Akhras, an 18-year-old girl from the Dehayshe refugee camp near Bethlehem, blew herself up outside a supermarket where shoppers were crowding to get supplies in between the Passover holiday and the early Friday Sabbath closure. Akhras killed at least two, wounded 20. In the videotape she recorded in advance, she is pretty, confident and relaxed, slim, dark-eyed, high cheekbones beneath her black and white kaffiyeh. A proud member of the militant Al-Aqsa Martyrs Brigades -- an offshoot of Arafat's own Fatah movement -- she condemned the failure, as she saw it, of Arab leaders to protect the Palestinian people. And then she annihilated herself.

Arab and European leaders are now condemning the large-scale and seemingly open-ended Israeli attack on Yasser Arafat, which they say can drag the whole region into war. But the key player in the Middle East, the U.S., has given mixed messages about the operation. Secretary of State Colin Powell said Friday that the cause of the escalation was "terrorism targeting innocent civilians," meaning Palestinian attacks on Israelis. He called on Israel not to harm Yasser Arafat and to prevent the loss of innocent Palestinian lives during the attacks, but he did not call for an end to the escalation itself. But early Saturday morning, the U.S. backed a U.N. Security Council resolution urging Israel to withdraw from Ramallah, which passed unanimously (Syria boycotted the vote).

The U.S. is trying to mediate in a conflict where the sides take turns frustrating the progress towards peace. Only weeks ago Washington felt it was the Israelis who had to be reined in, during a previous massive offensive. Almost against the better judgment of many officials, and against its natural inclination, the Bush administration sent its mediator, Gen. Anthony Zinni, back into the fray. Although the latest word is that for now Zinni will stay, his mission seems to be effectively over. He has not succeeded in establishing a truce, nor in mollifying the Arab world during Vice President Dick Cheney's tour of the region to garner support for a strike against Iraq, which was decisively opposed at Thursday's Arab summit in Beirut.

This last week in particular has been one of vast contradictions in the Middle East, a week in which peace moves and armed confrontation have succeeded each other quickly. It has all culminated, for now, in an unprecedented Palestinian wave of attacks on Israeli civilians -- 30 have died in three days, during Passover -- and an all-out Israeli assault on Yasser Arafat and the Palestinian Authority.

The government has set the country on a war footing, ordering the mobilization of more than 20,000 reservists. This feels like the big one, and Sharon knows that he has to deliver if he is to staunch the dramatic loss of support for the way he has dealt with this intifada. His soldiers have already started to die, two during the assault. The escalation has caused Palestinian casualties too -- at least 5, say medics, during the Thursday/Friday assault. Meanwhile, troops and tanks have smashed into the Palestinian leader's compound in Ramallah, and have taken up positions just a few doors away from the man the Israelis hold personally responsible for all the violence.

"Arafat, who has established a coalition of terror against Israel, is an enemy and at this point he will be isolated," Prime Minister Sharon announced as his troops were fighting their way into Ramallah. The Israelis say that they have exercised restraint for several weeks now, giving the Zinni mediation effort a chance. Over the weekend they accepted his bridging proposals for implementing a cease-fire, in the hope of being able to let Arafat attend the summit of Arab leaders in Beirut that took place last Wednesday and Thursday. That was seen as crucial for the success of a Saudi-initiated Arab peace initiative.

Arafat, however, rejected the Israeli terms for letting him go, which included the possibility that Sharon would not let him back into the Palestinian territories if attacks took place during his absence. Right now it is hard to tell whether the Palestinian leader wagered correctly. Certainly a terrible suicide attack did take place, on the first night of the Jewish Passover, in the resort town of Netanya. But it could also be true that Palestinian anger over the Israeli failure to let Arafat leave and return contributed to the fury behind the wave of attacks.

Palestinian spokesmen not only blame Israel for keeping Arafat from Beirut, where the Saudi peace initiative was accepted anyway. They also see a bloody calculus behind the move, believing that a military attack is the standard Israeli response to any peace move from the Arab side. On the eve of the new incursion Thursday night, Arafat made a last-ditch statement in support of a cease-fire proposal. But for both the U.S. and Israel, this was way too little and way too late.

Although the Israelis have promised the U.S. that Arafat won't be harmed in the assault on his compound, the Palestinians insist harm is indeed the aim of the operation. "They want to kill, exile or capture me," Arafat said, shortly after the incursion on the Arab-language satellite-TV station Al-Jazeera. "They will have to kill me. I want to be a martyr in the Holy Land," said Mr. Arafat. In an interview with CNN's Christiane Amanpour, he grew angry at questions about whether he would rein in Palestinian violence. "Are you asking me while I am under complete siege?" he retorted. When Amanpour pressed, he ended the conversation this way: "You have to be accurate when you are speaking with General Yasser Arafat. Be quiet! You are covering, with such questions, the terrorist activities of the Israeli occupation and the Israeli crimes. Be fair. Why do you make these certain mistakes? Thank you. Bye, bye."

Whatever the stated aim of the Israeli operation, Sharon's soldiers have steadily tightened the noose around Yasser Arafat and the Palestinians. The Israeli actions have been incremental, which has served to prepare international opinion for ever-tougher military assaults. In the beginning of the intifada, when Ehud Barak was still prime minister, Israeli missile attacks caused concern. Then it took incursions into Palestinian territory to cause an outcry; then came the reoccupation of Palestinian towns by Israeli troops, and eventually tanks surrounded Yasser Arafat's headquarters. Now Israeli soldiers sleep next door to him.

Sharon has never made a secret of his distaste for the Oslo peace accords, the Palestinian Authority and Yasser Arafat. He would ideally like to get rid of the whole lot. The question is whether now the time has come for his endgame. To be fair, there are other impulses at work behind Israel's military action. The public clamors for decisive action and no government can let the recent huge attacks, emanating from a neighbor's territory, go unanswered. That would be fair enough, if this Israeli government had embarked sincerely on a parallel political track, along side its harsh military response.

Palestinians now talk of "a million martyrs" as a reaction to the Israeli attack on their leader. Although this can be mostly chalked up to rhetoric, even Israeli security sources admit they're concerned that so far, their ever more dramatic military action has failed to foil the Palestinian militants -- in fact, it seems to have created a huge reservoir of resentment from which new suicide bombers emerge, including a third female bomber on Friday.

The Palestinians, on the other hand, are strengthened in their resolve by the perception among militants that the horrific attacks on Israeli citizens are effective in advancing their cause. More than anything else, the current Israeli assault is meant to show them that they are wrong. Sharon, with his reputation for impetuous actions, has decided to make them cry uncle, before his own public does. In Friday's Jerusalem Post, Sharon rival and former Prime Minister Benjamin Netanyahu said Israel must seek "total military victory" against the Palestinians.

"There is only one option that is now available to Israel: to decisively win the war that has been forced upon us," wrote Netanyahu in an op-ed piece. "What is required of us today is not a willingness to clench our teeth and bear this ongoing violence. We must instead seek a total military victory against an implacable enemy that is waging a terrorist war against us ... The claim that we have tried all military means to end the terror is baseless. We have not even used a fraction of our military power, and the little we have used has not been directed at the right target, namely ending Arafat's regime."

Abu Sharif, who was terribly injured in an Israeli assassination attempt in Beirut in 1972, draws a parallel with another era. "This is different from Beirut 20 years ago when Sharon also besieged us. He recently said that he now regrets having let Arafat get away then. Now he wants to finish the job in Ramallah."