A frock of memories

Hundreds of dresses with rich pasts flow into a project to get formal clothes to prom-bound teens. 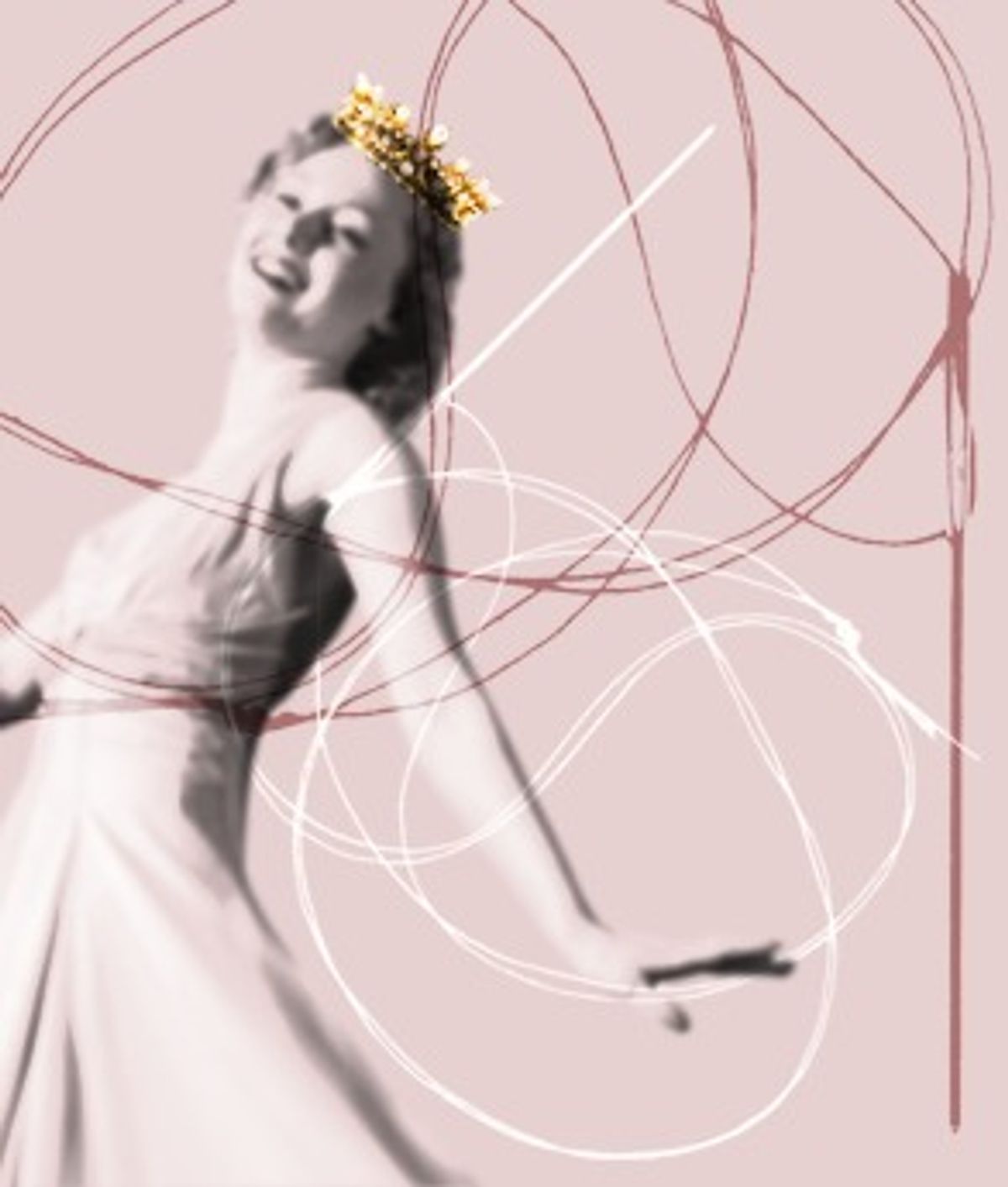 On a breezy Thursday night in San Francisco, several dozen 20-something women in plastic tiaras and pink feather boas converged on the Lion's Pub to give away their prom dresses. The Lion's Pub, normally an upscale bar popular with a middle-aged gay male clientele, served up sweet cosmopolitans and salted olives while the women reminisced about fashion faux pas of proms past, pouf skirts and all.

"I wore a white full-length mermaid dress to my senior prom, which went down to the floor and had a big bow in the middle; my hair was in a spiral perm," recalled Kristi Smith Knutson, a trim blonde with fluffy hair anchored by glittering fake jewels. "Those were the days."

The meeting was the social culmination of the Princess Project, a grass-roots effort to collect used prom dresses, bridesmaids gowns and cocktail dresses and offer them to local teenagers who can't afford their own clothes for the prom. The effort has taken off like wildfire: Apparently, there are many adult women in possession of aging bow-bedecked frocks who are more than happy to purge them from their closets. And what better motivation than fashion immortality? A new generation of teenage girls will be sent to the prom cloaked in the memories -- magical and mortifying -- as well as the taffeta and lace, of their former owners.

The Princess Project is the brainchild of Knutson and Laney Whitecanack. The pair, who work together at the youth leadership training group CORO, realized in February that many of the teenage girls they worked with every day couldn't afford a dress for prom. An e-mail was sent around to 30 friends, seeking dress donations; by the next morning, Knutson and Whitecanack had 85 responses in their in boxes. Six weeks later, the group has collected some 400 dresses; they expect 250 more to arrive before the big giveaway.

"We've gotten a lot of beautiful gowns," says Knutson, "and girls who couldn't otherwise afford those gowns will look fabulous on prom day."

The Lions Pub event was a kind of social mixer for Princess volunteers and donors, an opportunity to ogle each other's cast-offs and gossip about their own prom memories. Women in stiletto sandals and designer jeans minced through the door with garment bags over their arms, and inevitably tripped over to the donation desk, where a volunteer was duly entering each item into a computer database and attaching descriptive labels to the dresses. The shiny and sparkling confections hung on a rack by the fireplace, a mishmash of contemporary and antiquated styles: here, a maribou-trimmed minidress; there, a peach satin floor-length bridesmaid dress; and between the two, an 80's-era strapless prom dress with a purple and black taffeta bubble skirt.

The dresses get distributed in a warehouse event, which the organizers described as a "dignified" affair. Each attending teenage girl and one "guest" (mostly likely a relative or friend), would be assigned a volunteer personal shopper to help them locate and try on their dresses. On-site seamstresses help tailor the more challenging garments into prom-ready masterpieces, and stylists (including a pretty blonde makeup artist who has worked with teen pop queen Mandy Moore!) stand by to offer beauty tips.

As frou-frou and dangerously un-feminist as the project may seem, the organizers say that the response has been enthusiastic, and they produce gushing e-mails to prove it. One girl wrote that the Princess Project was the answer to her prayers. Says Whitecanack, "There's an obvious need for young girls in San Francisco to feel confident and good about themselves." And while it may seem frivolous to sell self-esteem as satin, any woman (or drag queen) who has zipped herself into a strapless sequined number can attest that plumage is power. Political correctness aside, it never hurts to feel like a hottie.

And this is no ordinary dress. The prom gown can be an icon of womanhood, a drop-dead costume for the high drama that comes from mixing formality with pheromones. For some, the prom is the first golden opportunity (complete with parental approval) to swath oneself in alluring fabrics, strap on complicated lingerie, and teeter on stilettos into situations that challenge one's sobriety and/or virginity. That dress, with all its frills and tulle and sequins and bows and plunging décolletage, is the proto-wedding dress, the high-cost canvas for spilled wine and salty tears. Worn once and mothballed forever, it is an expensive keepsake. But the pictures, aren't they priceless? This is how beautiful you were -- even then.

Most of the women gathered at the Lions Pub recalled their past prom dresses far more vividly than they remembered the prom itself -- perhaps because while the event was a brief, drunken or disastrous blur, the dress was lovingly coveted and admired for months in advance. The buildup to the dance -- the planning, the corsage, the shopping -- can, like first-time sex, be more exciting than the event itself.

Marita Cooke, an effervescent fashion design student who donated a beaded purse and sequined belt, had more distinct memories of her egregious (though, at the time, beloved) dress -- a velvet mock-turtleneck gown, with a dual-layer taffeta bubble skirt in a black and white polka-dot print -- than she did of her date. "I don't remember much about the prom," she says, "But I remember getting ready, doing the hair, getting the corsage, getting really drunk." A classic of the prom memory genre.

Many of those who could remember the prom didn't exactly have rosy memories. "I had an allergic reaction to my acne medicine," recalled Michelle Finkelstein, who gave up a wine-colored bridesmaid dress (the bride divorced last summer). "I ended up breaking out in hives and going to the hospital, so puffed up that I couldn't even put on my shoes." Still, she can describe with stunning recollection the dress she was going to wear: "a white, seven-tiered taffeta strapless with a big bow on the ass." It is now long gone, however: Her mother donated the dress to a gay prom in Syracuse several years back. "She gave it to our hairdresser, who dressed up as Barbara Walters," reports Finkelstein.

The racks of Princess Project dresses were mercifully free of seven-tiered anything, though there a few multilayered ruffled and poufed skirts that were probably last worn two decades ago. The Princess Project is not rejecting any dresses, says Whitecanack, but, she adds, "We want donors to ask themselves, would I wear this? Would I let my daughter or best friend wear this?" Any dubious items that make the cut, she says, can be made respectable by removing an oversized bow here, or adding spaghetti straps there.

Of course, even Whitecanack couldn't resist the temptation to pass on her own dubious junior prom dress from 1990: "I searched high and low to find that dress -- a white opalescent halter dress that comes up like a sarong with a bow on the waist," she recalls. "I had my hair big and crimped, and I thought I was the cat's meow when I wore that dress. No one could stop me." The Princess Project's "Style Council" of teenage fashion advisors was less enthralled with the item, says Whitecanack ruefully, but she hopes that they can tailor the piece into something wearable.

More than a few women at the Lions Pub recognized the perverse -- perhaps even masochistic -- nature of enthusiastically shipping teenage girls off to the prom. Proms, women discover far too late, rarely live up to the promises of all those teen movie climaxes; and by passing on the dresses, the Princess Project helps perpetuate the myth. Then again, if the best part of the prom is putting on the dress, perhaps the volunteers are just ensuring that the girls who get free dresses will at least have that to fondly recall decades later.

A few days after the Lions Pub fete, volunteers organized the 400 dresses according to size in the Princess Project makeshift warehouse -- an empty storefront in San Francisco's ritzy Marina district, where boutiques hawking Miu Miu and Marc Jacobs line the street. It was an astonishing array of recycled splendor: elegant Escada and Donna Karan creations crammed in with demurely frothy Jessica McClintock (the de facto Fashion Queen of prom) and sexy Nicole Miller numbers, plus a handful of curious vintage items like a pleated batwing '70s gown in green polyester.

A few of the Princess Project's teenage volunteers were previewing the dresses. One petite Asian-American girl was debating between a slinky black Bebe number with an asymmetrical hem, and a traditional pink princess frock with a full taffeta skirt. She tugged at the hem of the black dress, which trailed behind her on the floor like a train, and fidgeted with the sequined clasp at the neckline. "You look great in that!" Whitecanack exclaimed, as the adult volunteers stood around the mirror and gazed at the teen with wistful eyes.

Her friend, Li Qiu, was eyeing a Jessica McClintock spaghetti strap dress in a striking gold and white check, which she picked out because it was "different." "The big look this year is one-shouldered dresses," she said, pointing out one on the rack (again, Bebe). Overall, she thought the donated dresses were pretty cute, though she giggled that there were "some dresses that are, like, really old and ugly, with puffy shoulders."

Qiu wasn't going with a date to the prom; instead, like a modern girl, she was attending with a group of girlfriends. This statement met with immense approval from the organizers, a few of whom were still nursing their own bad memories of unrequited crushes who left the prom with someone else. Attending the prom in a gang makes the date extraneous to the dressing-up, and it's a surefire solution to the neglectful date ruining the memory of a grand entrance into the hotel ballroom, taffeta rustling and heels clicking on the freshly waxed floor.

"I have said repeatedly: It's not about the date. It's all about the dress. And isn't that always the case?" queries Whitecanack, cheerily. "In fact, it's not even maybe about the dress, but about how you feel in whatever you're wearing. That's what style is all about."