Smoke gets in your eyes

Cigarette smoking is a metaphor for sex, says the author of a book on tobacco. 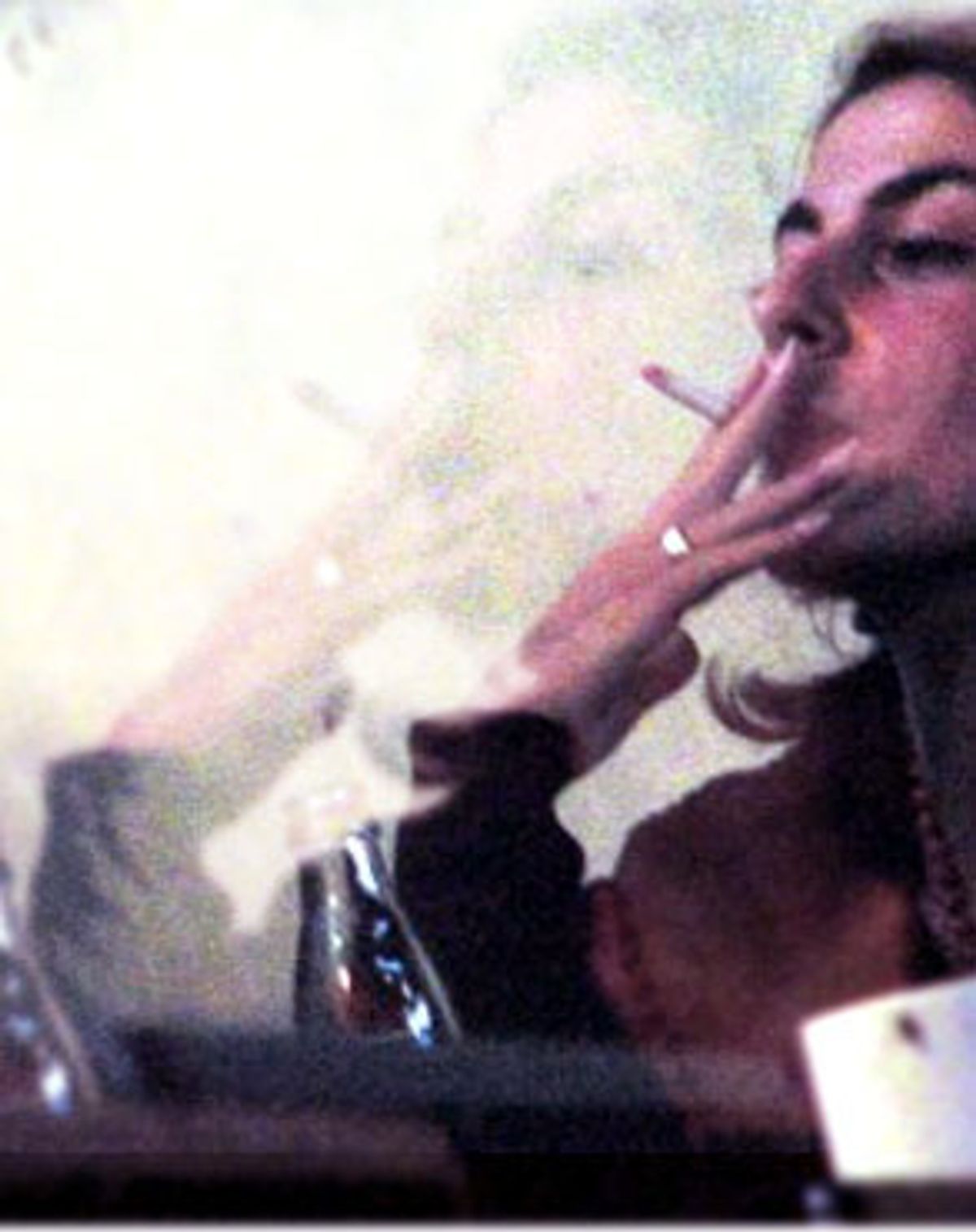 Torch singers used to sing sexy nicotine songs like "Don't Smoke in Bed" and "Smoke Gets in Your Eyes." Then the lounges became discos and the torch singers all ended up dead.

It's been years since smoking was sexy, years since a fellow would flip a Camel in the air and catch it with his lips, or a blond would lift her chin toward the moon and release her own little halo of smoke. Ancient history. Now smoking has been reduced to a sexual fetish -- some whore blowing smoke rings across a john's loins and calling that a blow job.

Iain Gately is one Brit who remembers the old days. A few years back, he abandoned the "no smoking zone" of London and expatriated himself to Tarisa, on the Spanish side of the Straits of Gibraltar. The citizens of his town still smoke like chimneys. Gately even wrote a history of smoking there, "Tobacco: The Story of How Tobacco Seduced the World." It's a cultural history of the weed, from American Indian prehistory up to present. And seduction is the operative word.

Gately recounts the gender differences: Gentlemen once seduced women with smoke signals as if they were both Cherokees; the masculine style of smoking was to puff tersely with as little effort as possible. Women were expressionistic -- waving the cigarette in the air, puckering their lips.

And the author remembers the first time he was seduced by a woman wanting cigarettes.

"It was in Spain," he says over the phone, standing in his favorite bar in Tarisa, where I have reached him from New York. "A girl came up and said, 'Can I have a cigarette?' I handed her one and she walked off.

"One of my mates said, 'That girl is interested in you. Go over and talk to her.'

"'She asked you for a cigarette.'"

Gately pauses and smiles. "I went over and that was true. Cheers."

I imagine Gately enjoying a post-coital smoke, considering the entire sexual history of cigarettes spread out before him like the Mediterranean Sea. Six thousand years ago, smoking was a fertility rite. A shaman would blow smoke over the loins of virgins about to be married.

"The cover of my book has got a picture of a naked blond descending from the sky with a leaf of tobacco," Gately says. "That derives from a Native American myth. There was a great famine in the land. The Great Spirit sent down a naked blond woman who sat cross-legged on the ground. Under her left hand sprung up wheat and from under her right sprung up corn, but in the damp patch where she's been sitting there came tobacco."

"The Native Americans made this up before they'd ever seen white people?" I ask.

"Yeah," Gately says. (I think I hear him lighting up.) "Remember Cortez being told that the gods had sent a white man to help them? When Europeans first got to the New World, tobacco was still associated with sex because the conquistadors caught syphilis for the first time, and they used to smoke to ease the pain of this new disease. Then monks started taking up snuff, partly to try to get the Aztecs into their churches because Aztecs associated smoking not just with sex, but with God. The monks were frowned upon back in Europe because snuff promotes sneezing and sneezing was considered the brother of an orgasm. So Westerners negatively associated tobacco with sex for a period of, say, 300 years. Until the end of the 19th century, it was more 'smoking and sexism,' than 'smoking and sex.' Normal working women smoked cigarettes, but in decent society it was frowned upon. It was a black period for the weed and seduction. You didn't find people even using smoking as a metaphor for lust."

That all changed in 1874 with the George Bizet opera "Carmen." "It was originally a French 1845 novella [by Prosper Mérimée] about this very sexy cigarette seller," Gately explains. "The narrator meets Carmen on a bridge where women are bathing naked underneath. He offers her a cigar, which she rejects. Then he offers her a cigarette, which she accepts. That's probably the first instance where you got cigarettes acting as a go-between in an act of seduction between a man and a woman. From now on smoking and sex start getting together."

"From here on out men and women start blowing smoke screens at each other," I venture.

"That certainly comes into it," says Gately. "In romantic literature you'd have smoking heroines and you'd have men giving girls cigarettes. By the First World War, when women became much more emancipated, they enjoyed the newfound freedom of smoking. Dance halls opened up and smoking became a go-between."

"Cigarette smoking is self-evidently a metaphor for sex," says Gately. "That's what all these smoking fetish sites on the Internet are about. Cigarettes were once an elegant extension of the body, like fingernails. They make the body look longer -- Audrey Hepburn with her long cigarette holder epitomizes how cigarettes made you look more elegant."

I ask him how many times in his life he has enjoyed post-coital cigarettes. "It depends on post-coital with a smoker or nonsmoker. In both those situations I always recant to the wishes of the lady."

"Can too many cigarettes make a man impotent?" I ask. Gately takes a professional tone. "Smoking puts stress on your heart," he says. "It's going to make you prone to any debilitations resulting from that. In the U.K. they loaded smoking studies with obese smokers. It was probably fat that killed them or caused impotence. There are, however, tobacco shamans in South America that are so addicted to strong tobacco they have gray skin -- because nicotine causes your skin temperature to drop 10 degrees, which does have an effect on impotence because you can't feel what's going on."

That said, who is the sexiest male smoker?

"Who did it well?" Gately asks rhetorically. "Humphrey Bogart did it well. Robert Mitchem did it well too." How about women? "Let me think. You mean someone famous? I was going to say my old lover, but she's given it up. People know her in New York and I won't pass on her name. She's got beautiful lips that concentrate your attention, and beautiful fingers, and she's beautifully coordinated. Juggling spoons, she'd look sexy."

I confess a prejudice: "Women shouldn't walk down the street with cigarettes dangling out of their mouths. Bogart can smoke that way, but never Bacall."

Gately is asked if there are any women smoking in the tavern. "There are." How do women drink and smoke in Spain? "They probably sip more than they swallow," Gately says. "They'll light up, gesture and wave it around in the air. Probably they smoke more, but not quiet as heavily. The women here have been renowned since Caesar's time for their beauty and alluring dress." He tells me there is a woman near him who is smoking.

"This one is somewhere between 18 and 20. She has long dark hair tied with a red ribbon. She has what look like blue eyes that are quite common down here. And there is a saying in Granada --" Gately speaks a string of Spanish. Then says nothing.

"What does that mean?"

"They get their tits before their teeth," Gately answers. "They are somewhat voluptuous." When she blows her smoke, where does she blow it? "Ahh. Blows it out straight in front of her. But she's talking with friends. This is functional instead of seductive smoking. But she looks very poised doing it."

According to Gately's book, one is not supposed to blow smoke in a person's face unless you want to have sex with them.

"If you blow smoke in someone's face, it means that you love them," Gately says. "It is a substitute for poetry. I suppose because cigarette smoke is so acrid and dry, the chance of making the recipient cough instead of returning your adoring gaze is sort of 50-50." He chuckles. "'Blow Some in My Direction' came from a Camel ad in the 1930s."

Then we discuss the sorry sight of citizens huddling in the cold to smoke in both Manhattan and London.

"Having people smoking in an ugly, furtive way is more likely to discourage smoking than any government campaign," Gately observes. "If you ban something or frown on it, you give it evil powers and turn it into a fetish. Smoking has gone underground. It is seen as a deviance and can be aligned with other deviancies."

Ah, deviancies. "Have you ever seen a woman smoke a cigarette with her vagina?"

"Yes," Gately answers. "In a bar in Bangkok. It's by rhythmic contraction of the internal muscles. I saw the same woman pour a bottle of beer inside her, and then hop on the bar and empty it in someone's glass."

"Let's go from the groin to the mouth," I say. "You spend a lot of pages ragging on Sigmund Freud and his theory of 'lip eroticism.'"

"Freud as usual is full of contradictions," Gately sighs. "He was a very heavy smoker himself -- about 20 cigars a day. The habit nearly killed him. He got gum cancer in the most appalling manner." Gately pauses. "Freud delved into human sexuality and in my opinion made up a language to describe it. He ascribed every aspect of human behavior to some sexual or Oedipal impulse. Men smoke because they're seeking breasts to suckle." Why do women smoke? "There's a contradiction in that, isn't there? Obviously women already have breasts."

"Of course, then there are cigars," I say. "According to the Starr Report, President Clinton inserted a cigar into Monica Lewinksy's vagina, and then pulled it out and smoked it. 'Tastes good,' he chuckled."

Gately laughs. "The president couldn't have used a cigarette because they're too skinny, but in the golden age of Hollywood cigarettes were constantly put between the actress' lips and in her fingers to signal what she would be like in bed."

I bring up another prejudice of smoking: Pipe smokers aren't sexy.

"There was one sexy pipe smoker, or supposed to be," Gately says. "Was it Clark Gable? Cary Grant? You know that 300-year period I described before smoking became sexy? That was when the pipe ruled. That would be the best way to kill off sexiness and smoking -- to introduce pipes."

"Before you go, one last question," I say. "There is no tradition of a post-coital joint, is there?"

"I've been told that there is no wrong time for a joint," Gately answers, then he disappears like smoke.