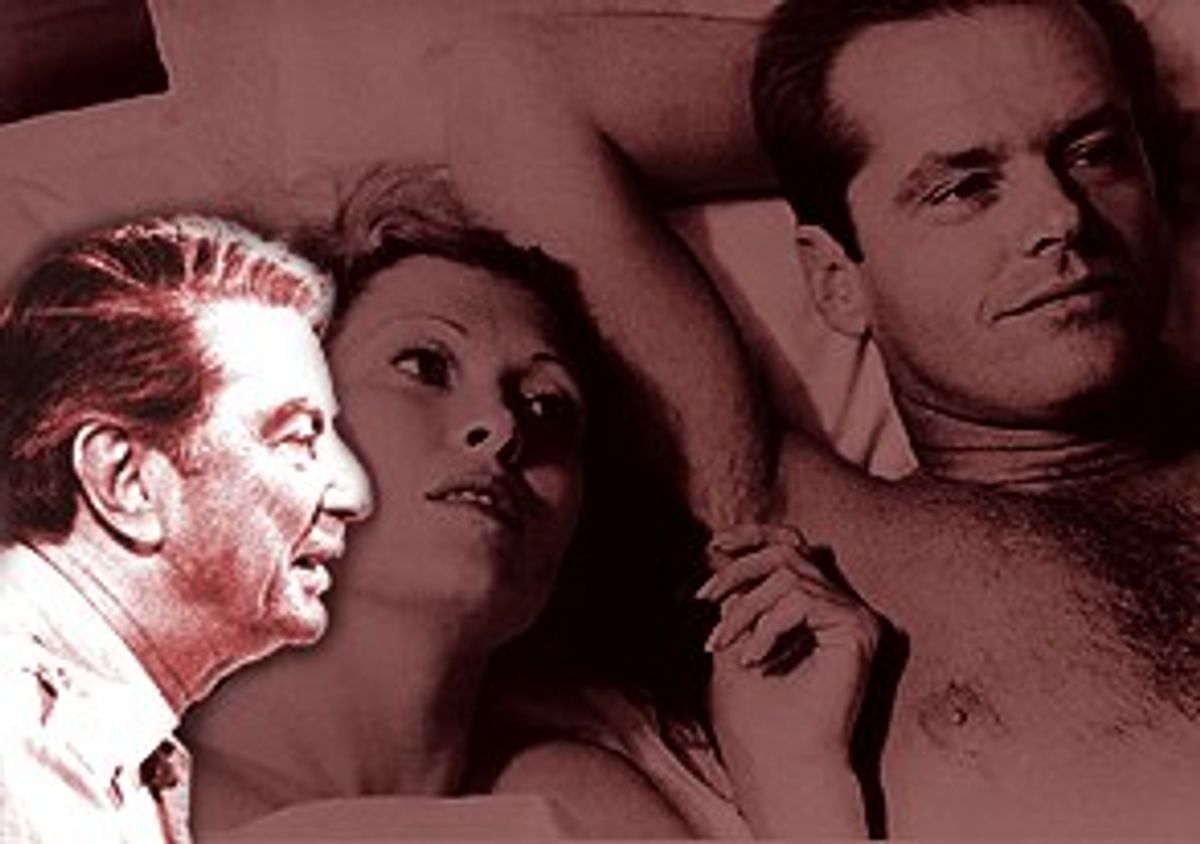 In a movie (as in life), what you know and when you knew it can make a very sexy equation. Take "Chinatown," for instance. Early on in the action this rather cocky, know-it-all private eye, Jake Gittes, has done a little bit of divorce work. Or so he thought. Only the people he was watching turned out to be a lot more than what he reckoned. He didn't know enough, soon enough. But for the moment, he is entirely pleased with himself, and he is just back from the barber shop with a dirty story he's bursting to tell his associates.

Jake has an inner and an outer office (like most of us). And what he does is tell his pouting secretary, Sophie, to "go to the little girls room for a minute," so he can share the story with Duffy and Walsh. Sophie does as she is told, but Duffy and Walsh are trying to give Jake the "shut up" sign. Nothing works. He is so full of this story, about "screwing like a Chinaman," that he lets it all out, without ever realizing that the knockout Evelyn Mulwray has come up behind him (from his inner office), so as to hear the lewd story, endure his schoolboy laughter and then drop a subpoena on Jake and his naughty dick because, after all, she's Evelyn Mulwray -- which is the name the woman used on the divorce job when she hired Jake. "Have we ever met?" is all she asks Jake. He doesn't think so. He'd remember. Bingo, here are your legal papers. Her extreme sexual attractiveness is given a huge lift of superiority by the way she has been able to observe his silly pleasure. Their relationship has begun so badly we start to guess they are meant for each other. If they realize it in time.

Why praise Richard Sylbert now? Because last week, during the heavy storms that brought us the deaths of Dudley Moore, Milton Berle, Billy Wilder and even Britain's Queen Mother (her being the topper was a Billy Wilder joke), Richard Sylbert also passed away and didn't get a lot of notice. He was 73, and one of the nicest, smartest people in Hollywood. He became a studio executive late in life at Paramount, and did well in the job. But he was a production designer, what used to be called an art director, and his pictures included "Baby Doll," "Splendor in the Grass," "The Manchurian Candidate" (remember the way the North Korean indoctrination session keeps blending in with the ladies club talking about hydrangeas), "Long Day's Journey Into Night," "Who's Afraid of Virginia Woolf?" "The Graduate," "Rosemary's Baby," "Carnal Knowledge," "Reds," "Frances," "The Cotton Club," "Tequila Sunrise," "Dick Tracy" and "Mulholland Falls."

And "Chinatown." Of course, a great deal of art direction can be found in the screenplay. But if you look at "Chinatown" carefully, with Sylbert in mind, you'll pick up a pattern of inner and outer rooms, of the secret lurking behind the facade and of people being placed or moving in ways that indicate different levels of knowledge. I'm talking about something that goes way beyond the nifty re-creation of the 1930s period -- the clothes, the car, the Deco look (though all of those things would come under Sylbert's control). I'm talking about the way the action is shaped -- the way Gittes prowls the water system, learning stuff, only to have the great rush of knowledge and water sweep him off his feet; the way so much plot stuff is revealed in a trip to the office of the deputy to Hollis Mulwray, on the wall, in photographs; the way Gittes is forever knocking on doors, pushing the open door aside, going in, finding something out and then being trumped or tapped by further revelation.

In short, what I mean is the way "Chinatown," that paranoid state of mind in the film's Los Angeles, begins to affect and betray every spatial relationship. Of course, this is the deepest way of preparing us for the film's great shock: that once upon a time, in a gentle paternal way, a father came up behind his young daughter and fucked her -- the Chinatown way.